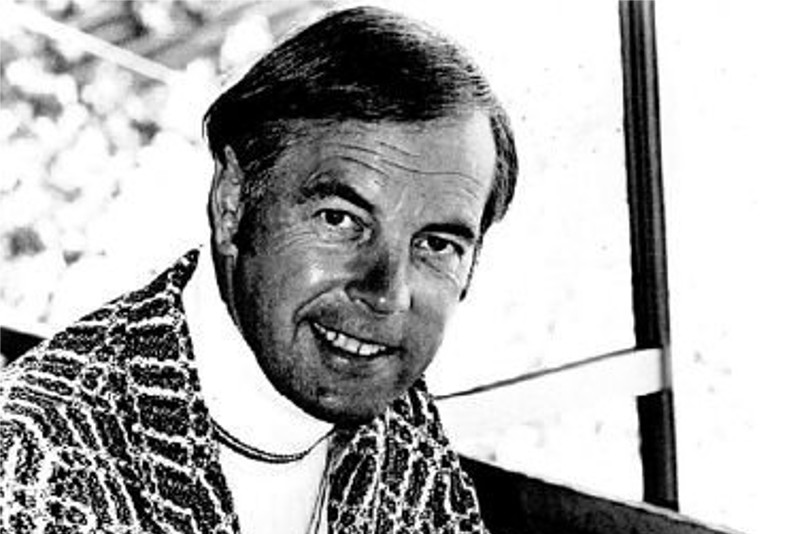 Monte Moore is more than just a footnote in the rich history of baseball broadcasting!

Moore says Gowdy was a comforting and unpretentious boothmate. In 1972, Curt also made Reds’ announcer Al Michaels feel at ease. Al was just 27 and at that point unknown nationally.

At the start of his big-league career in Kansas City in 1962, Moore replaced Merle Harmon who was fired by Charles Finley, the team’s impetuous owner. Finley unloaded Harmon after the broadcaster refused to promote Poison Pen Night late in the 1961 season. At the time, Finley was threatening to move the A’s to Atlanta, Louisville or elsewhere. Ernie Mehl, sports editor of the Kansas City Star didn’t side with Finley in his funding battles with the city fathers. Poison Pen Night was aimed to disparage Mehl whose tendentious columns tempered the support of city tax payers to fund Finley’s demands. Word was that because Harmon refused to engage on-air, he was let go.

Interestingly, after losing the A’s to Oakland, Mehl was one of the leading protagonists who encouraged the American League to grant Ewing Kauffman and Kansas City an expansion franchise. The Royals launched in 1969.

The 19th century philosopher, Friedrich Nietzsche said “That which does not kill us makes us stronger.” Moore suffered through an emotional rollercoaster working for Finley. When the team settled in Oakland, he was saddled at different points with a showy Red Rush and with out of their prime veterans, Al Helfer and Bob Elson. Rush was fired by Finley on three separate occasions, once in Kansas City and twice in Oakland and Elson, it was said, was busy placing bets in the booth on horseracing.

But it was the one combative season in 1970 with the larger than life Harry Caray that still pains Moore today. “It was my worst year in broadcasting,” his voice lowering sadly, recollecting that difficult season some 48 years ago. Caray had been fired in St. Louis after getting into the crosshair of the Busch family. Finley hoped that the colorful and bubbly Caray would galvanize the Bay Area where the A’s hoped to steal some of the Giants thunder. With Caray hired, Moore was unhappily relegated to the number two broadcaster.

According to Moore, Caray expected him to snap at his command and tested him immediately. One day, Moore was on the field at spring training, engaged in a leisurely conversation with other press members. Harry came by haughtily and plunked down his large bag near where the group was gathered. After some perfunctory small talk, Harry walked away, turned to Moore and spewed loud enough for all to hear, “Monte, please bring my bag up to the press box.”

Moore decided to nip the command in the bud. “I told him, I’m not your caddie.” So was the start of one ugly season of Caray and Moore. It wasn’t good. Moore said that the local station, KNBR, chimed in too. Apparently, Caray gave free plugs to bars and restaurants he frequented in the Bay Area and that it compromised the station’s advertising sales efforts.

After one long year though, Finley said, “Caray’s (crap) that he pulled in St. Louis, didn’t go over in Oakland.” So Caray was gone and took his repertoire to Chicago, first with the White Sox and then with the Cubs. In Chicago, of course, Caray solidified his legendary status.

With Caray’s departure, Moore was restored as the team’s number one voice. In 1974, the A’s had an opening for a number two man. Finley asked Moore to scout for prospects. He got an audition tape from Jon Miller, who called a Giants game into a tape recorder from the bleachers. “It sounded great. I brought Miller into the A’s office and we talked. While he was still sitting there, I walked into another room, called Finley in Chicago and played the tape for him on the phone. He told me to hire him. I did, right on the spot, and that was the beginning of Jon’s great career.”

After leaving the A’s, Moore did play-by-play for the secondary NBC Game of the Week and later worked with Wes Parker on a USA Network package of national baseball.

How did you get along with Reggie Jackson? “We did have a run-in at one point but after that we made peace.” What caused the run-in? “Reggie wrote a book as a player and I said on-air it was a good book but wondered why it had to be laced with profanity. The comment got back to Reggie and one day soon thereafter he sees me in the clubhouse and jumps all over me with equal profanity. Yet, in time, we got on the same page and got along just fine.”

Moore was dubbed by some as the “spy in the sky” for an incident in 1967 when the team was still in Kansas City and in last pace. While flying commercially to Washington, two players got a bit rambunctious and the flight attendants (stewardesses then) called for the pilot to come out to establish some order. Word got to Finley who then fired manager Al Dark. Moore was accused of snitching to Finley and sharing details of the incident. For decades, Moore denied the accusation. A score of years later, Moore says Finley’s son admitted to him that he himself was on the flight with the team and told his dad about what had happened.

When his on-air career wound down, Moore, at the suggestion of Gowdy, invested in radio stations in California; outlets that Monte grew and ran until he sold them. Curt himself had started building a stable of radio stations in the late 1950s while he was still the popular voice of the Red Sox.

Monte now lives in the Fresno area and sounds robust.

That was in 1972, and some of the players lived in our town, Lafayette. Moore too. John Locker, a fifth starter. Back then the World Series was played during the day. So Mr. Rogers brought in his little black and white TV, and we watched part of the first game during recess. Mesmerizing. I was hooked on baseball from that moment.

When I was an intern at Channel 4 in Boston in the summer of 1978, they used to send me with a camera crew to shoot highlights of the game for the 11:00pm newscast. These were the days before every game was on TV. Our camera spot was in a booth behind home plate adjacent to the press box. One night I was there when Harry Caray and Jimmy Piersall were in the next booth over doing the White Sox/Red Sox game back to Chicago on WSNS Channel 44, so I observed some of their pregame routine before we started… Read more »