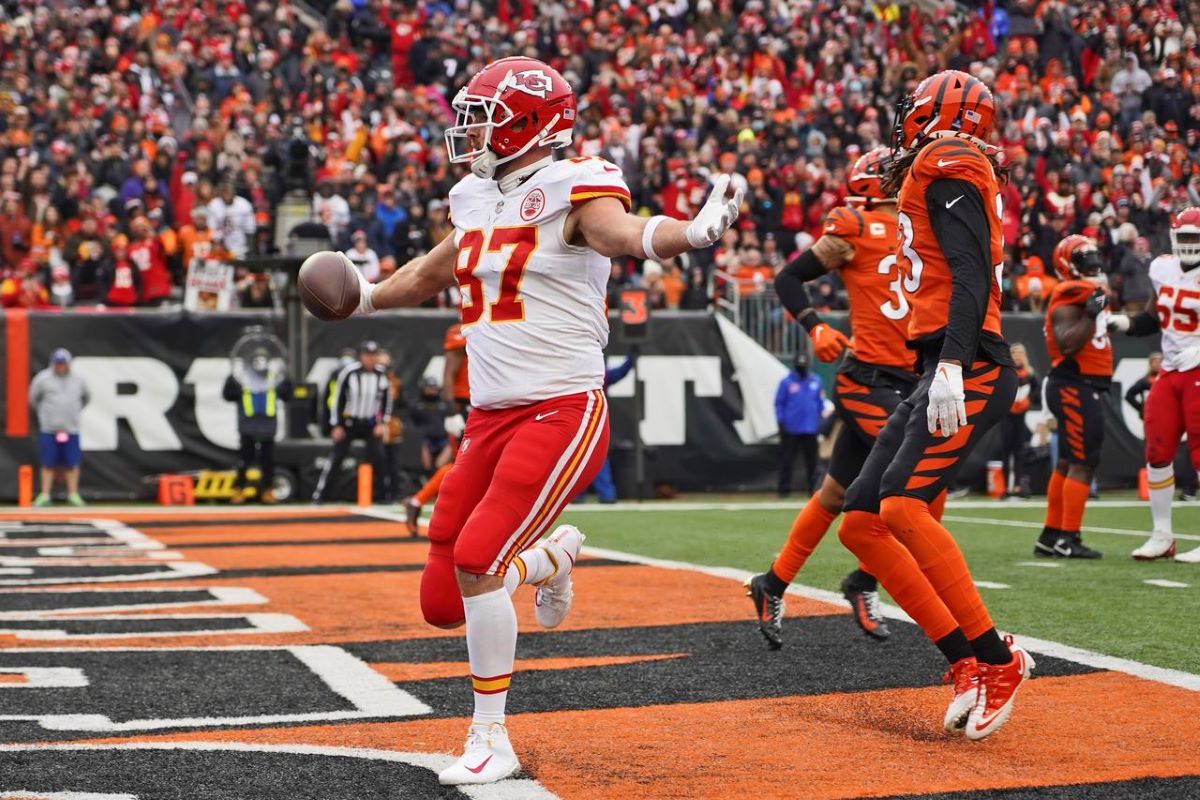 If the Super Bowl is as competitively close as the six games were the last two enthralling weekends, what a Sunday it will be!

The only news development that topped the games themselves was CBS’ halftime show which turned into a clumsy and inaudible production. Boomer Esiason (left) made it crystal clear expressing in a frustrated tone that the stadium halftime show was completely drowning their voices. Looking at no one in particular, the former Cincy QB, told the millions of viewers that he couldn’t hear a soul  including Nat Burleson who was sitting right next to him.

Anyhow, here are the football highlights:

The Kansas City Chiefs’ electric offense was able to score on their opening drive with ease, despite having to challenge a spot by the refs, costing them a timeout. Nantz and Romo marveled at how seamlessly the Chiefs moved down the field, with quarterback Patrick Mahomes finding receiver Tyreek Hill for a 10-yard touchdown. On the kickoff, Nantz noted that no play on that drive exceeded 15 yards, demonstrating the new element of the offense that thrives off of patience.  Romo also explained that defensive changes to this strategy give the Chiefs the chance to beat them deep up the middle, making playing this team a lose-lose situation.

Reaping the Rewards of Patience:

On the first play of the Chiefs’ second drive on offense, Patrick Mahomes threw a deep bomb to wide receiver Mecole Hardman to close out the first quarter. Immediately after the play, Romo took to the tablet to break down the play, explaining that the patience and short plays of the first drive enabled the explosive offense to finally make a big play.  Forcing the Bengals’ defense to adapt to a conservative Chiefs’ offense allowed a big play to develop as Romo predicted, making this offense near impossible to game-plan for, or play against.

After an entire half trying to get their offense going, the Bengals are finally able to find the end-zone off a 41-yard rushing touchdown by Samaje Perine. Tony Romo described that what made this play successful was the Bengals’ ability to block as the play developed.  Despite this, however, it is also worth noting that the Chiefs will have a minute to score, and they will be receiving the ball to begin the second half.  Nantz said that this is the jolt the Bengals needed, but we’ll see how long it lasts.

With the clock stopped at 13 seconds,  Nantz told the audience that the big question of the week has been what you can do in 13 seconds, alluding to the Chiefs amazing drive with only 13 seconds to get into field goal range, successfully sending the game to overtime. Romo analyzed that 13 seconds is plenty of time for the Chiefs to find the end-zone while bordering the goal line, with the chance of having 4 touchdown passes before halftime.  Mahomes and the Chiefs are not able to capitalize, keeping the score 21-10 entering the locker room.

Competing With the Halftime Performance:

The CBS halftime show crew ran into vocal paralysis trying to outshout a halftime country music performance in the stadium. It turned laughable. Boomer Esiason and Nate Burleson couldn’t help but dance along to the music. While it was good to see the CBS studio crew venture out of New York to Kansas City, these problems would certainly not exist had they stayed in the studio.

Down 21-3, the Bengals turned energetic in the second half to tie the game with a Ja’Marr Chase touchdown followed by a successful 2-point conversion. The second-half Chiefs were unproductive, underscored by the first ever interception thrown by Patrick Mahomes in an AFC Championship game. Jim Nantz entering the commercial break before the fourth quarter even joked to Tony Romo asking, “You thought this game would be tied heading into the fourth, didn’t you?”

After using his legs to get two key first downs, Jim Nantz details how no quarterback drafted first overall has ever led his team to the Super Bowl by his second year. Burrow, selected first in 2020’s NFL Draft, has the chance to be the first.  So Burrow also had the chance to be the first quarterback not named Brady to beat Mahomes in the playoffs, making for some exciting fourth quarter action.

Bengals Punch Their Ticket to SoFi:

After Patrick Mahomes threw an interception in overtime, the Bengals drove down field and made a game winning field goal, sending them to their first Super Bowl since 1988.  The man to thank; Money McPherson, who kicked the game winning field goal in the last two playoff games. After the game, Burrow was hard to reach for a post-game interview on the field with so many people wishing him congratulations. Despite the electric energy on the field, the fans in the stands were not too thrilled, seeing their Chiefs sent home earlier than expected. Kudos to CBS’ Tracy Wolfson who was disrupted repeatedly in her effort to get Burrow’s attention. Through it all, she maintained her equanimity.

In the first half, the Rams lost both running back Cam Akers, who had already sat out most of the year with an Achilles injury, along with tight end Tyler Higbee, who got injured and came back against the 49ers in their Week 18 matchup. The depth chart has been so depleted for Los Angeles that upon taking the field, Joe Buck notes that Kendall Blanton is the only active tight end on the roster. While Akers eventually returned to the game, the club’s injury woes were still of concern. Despite fighting the injury bug, the Rams were able to find the offense on a “perfect” drive as described by Buck with a Cooper Kupp touchdown.

On a screen pass by Jimmy Garoppolo, wide receiver Deebo Samuel was able to show off his incredible speed and elusiveness with a touchdown to even the score at seven.  Joe Buck remarks that this is Deebo’s eleventh touchdown in eleven games, where Troy Aikman adds that he has been “balling all year.”  If the 49ers are going to keep up with the Rams’ offensive production, it will be through the playmaking ability of Deebo Samuel.

Reporting from the sideline, Tom Rinaldi reported that 49ers’ wide receiver Deebo Samuel has tweeted his support for his quarterback Jimmy Garoppolo, despite the outside narratives that exist. One developing story over the last few weeks has been whether the Niners will move on from their quarterback in favor of the backup Trey Lance who was drafted third overall in last year’s NFL draft. Immediately after this report, Garoppolo threw a ball Deebo’s way across the middle of the field to where he was met with a colossal hit. Samuel was able to walk off the field and appeared to be okay on the sidelines.

After scoring a touchdown and down just three points early in the fourth quarter, the Fox camera crew showed Rams fans celebrating their team’s scoring drive, yet viewers could not help but notice an array of 49ers fans. Troy Aikman, analyzing the touchdown pass to Kupp, noted that the Rams used a silent count on the play to combat the fan noise in the stadium, which should not have been necessary at a home game. Both teams’ fan bases have certainly made their presences felt in SoFi Stadium this evening, however 49er fans have come out in bigger numbers than expected to support their team.

Can’t Keep Up With Kupp: 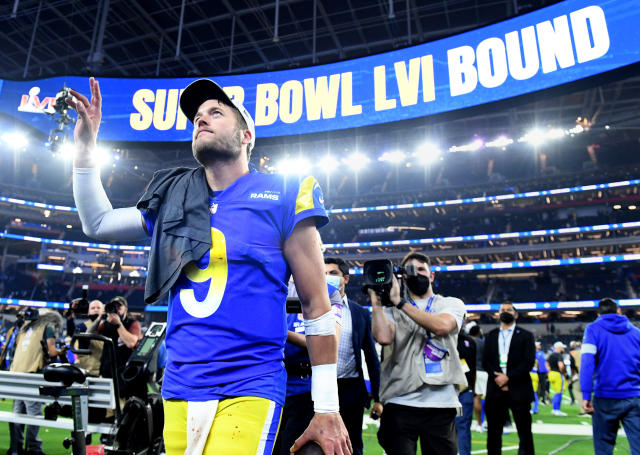 After a short pass from Rams’ quarterback Matthew Stafford, receiver Kupp is able to make something out of nothing, dodging tackles and running until he was down well into the red-zone. This play gave the Rams life after their backs were against the wall, stuck in midfield, needing a score. Beforehand,  Aikman noted that this would have been a 50+ yard field goal had they gained no yards, but luckily for Los Angeles, their drive has seemed to find new life thanks to the triple crown winning receiver.

On a tipped ball by 49ers quarterback Jimmy Garoppolo that was almost picked off, there was visible nervousness by multiple players on both the Rams and the 49ers sidelines.  Most notably on edge was Rams’ quarterback Matthew Stafford who can be seen with his hands very close to his face, hoping that the defense is able to get a stop.  Aikman analyzes that the pressure created by the Rams’ defensive line is what has made this game difficult for Garoppolo, even with no sacks on the day.

Rams are Moving On:

On a short throw by Jimmy Garoppolo, the Rams pick it off, punching their ticket to Super Bowl LVI. They won’t have to travel very far as the game will be played on their home turf at SoFi Stadium. All the nerves Matt Stafford showed on the sideline seemed to be irrelevant after a huge stop on defense, getting the Rams to their first Super Bowl since the 2018 season. It was done that they lost to Tom Brady and the New England Patriots.  Rams’ players could not contain their excitement either, with defensive tackle Aaron Donald crashing the post-game interview to congratulate his quarterback.

What’s Next for San Fran?:

After speculating that this might be the last game for Jimmy Garoppolo, Buck and Aikman can’t help but participate in this discourse after the clock hit zero. With a game-losing interception on the stat sheet, it’s hard to argue that moving on might be best, but what Buck and Aikman agree on, is that this will be a big question for head coach Kyle Shanahan and General Manager John Lynch.  Deebo Samuel can also be seen on the sideline in tears after a hard-fought season. But even after exceeding expectations, it is likely back to the drawing board for the Bay.

Good summary of both games. Worth noting, though, is Romo’s comment prior to the Bengals winning FG, when he obliquely noted that he was aware of a bad snap in that situation. Jim Nance didn’t realize that Romo was actually referring to himself when back in 2007, he mishandled the snap on a Dallas FG attempt that cost the Cowboys a playoff win.

One other comment about the narrative. “Punch their ticket to….” I am thinking Marty Glickman would eschew that comment which has become a cliche and just say, “they won the game and are going to….”