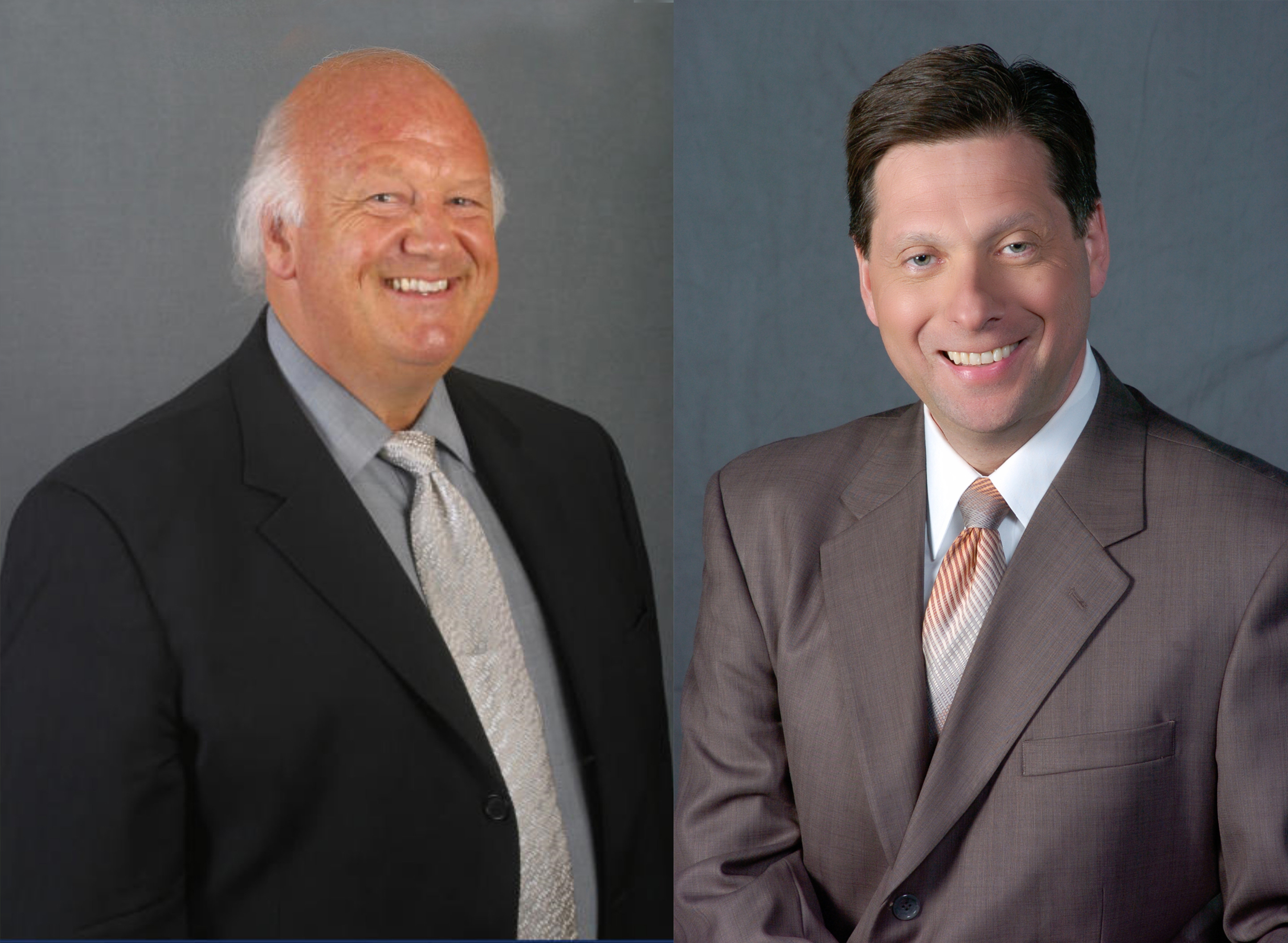 Rarely if ever has an American market been blessed with a popular one-two play-by-play combination like Scully-Hearn in Southern California.

2018 Most Popular Baker’s Dozen of one-two play-by-play punches locally:  This is a scrambled list. It is not being presented in any given order or suggested status

Miller is from Northern California and while he’s known nationally for all his years with ESPN, Jon has been a very popular Giants broadcaster on radio and television for 22 seasons. He has a relaxed, unhurried and mellifluous delivery. He recognizes that storytelling is part of baseball’s allure. Miller, like his two baseball broadcast idols, Russ Hodges and Lon Simmons, is a Ford Frick Winner. Papa has done baseball and basketball in the Bay Area. Yet he has proven that he’s worthy of football acclaim, after succeeding the legendary Bill King as Voice of the Oakland Raiders. Greg did so two years after King gave up the gig in the 90s. Papa’s tone is captivating and intense. His broadcasts are graphic, strongly opinionated and filled with fervent sentiments. Fans in Northern California know that Papa has the goods!

You might say that Marty Brennaman owns the radio market in Cincinnati. He certainly owns summers. Marty has been the Voice of the Reds since 1974 when he took over for a young Al Michaels. Brennaman calls games using the best of descriptive fundamentals and spices his broadcasts with some sharp opinions. Reds fans hang on his every word. Hoard is more reserved but is equally prepared and draws vivid pictures on his radio broadcasts. He’s an easy listen and Bengals fans have warmed up to his composed call. Because Hoard also calls UC football and basketball, Brennaman and Hoard are heard year-round to the delight of Cincinnati sports fans.

A New York boy who made good, Nadel is now a Texas fixture. This is his 40th easy-going season with the Rangers. While he did some television at the start of his Texas tenure, Nadel is now synonymous with the team’s radio broadcasts. Not many in the business get lifetime contracts. In 2006, Nadel did. He’s Mr. Baseball in North Texas.  If the Cowboys are the heart and soul of the Dallas sports scene, Brad Sham is the market’s lead play-by-play announcer. Sham, whose roots are Chicago, has a narrative call. It’s different from many in NFL radio booths. Other than a couple seasons away, Brad has been the Voice of the Boys since 1984.

What can you say? Other than Denny Matthews in Kansas City, now in his 50th season, Uecker is tops in baseball broadcast seniority. This is his 48th season behind the Brewers radio mic. Uecker means as much in Wisconsin as Vince Lombardi or Brett Favre. If Ueck is summer, the Packers are fall. Wayne Larrivee employs his sonorous pipes intensely on Packers radio broadcasts week after week.  And that’s music to the rabid Packer Cheeseheads! Wayne will begin his 22nd season with the team, after 14 with the Bears and 7 with the Chiefs. Green Bay fans love the temperament that he brings to the booth every week.

In the long and fabled history of the Sox, no broadcaster has spent more time behind the team’s microphones, television or radio. This is Castiglione’s 36th season as lead radio play-by-play voice. His voice and intonations are embedded in the ear of Red Sox fans across New England. Hearing Joe cover spring training games from Florida in March means that Boston’s frigid air mass might just wander off soon. Gorman, like Castiglione, is a born and bred New Englander. If his accent wasn’t so redolent of his provincial roots, his might be Mike Breen not Mike Gorman, the national voice of the NBA. He’s that good. Gorman, like Breen, knows the game as he does the back of his hand. Gorman is unsung, yet beloved in Beantown. This fall he begins his 38th season as the TV voice of the Celtics.

If someone constructed a montage of Phoenix, McCoy would dominate it. He came to the market in the 60s, did minor league baseball and hockey, college sports and hosted music programs. Al has more tenure than any NBA broadcaster. He begins his 47th season this fall after joining the franchise in 1972. For many years, McCoy orchestrated a popular simulcast on TV and radio. Pasch, known across America for his diverse work with ESPN, also calls Cardinals games on radio. Another Syracuse alum, Pasch has voiced the Arizona broadcasts since 2002 and has been heaped with praise for his exceptional work. The population of Phoenix has erupted over the last score of years and like Pasch and McCoy the town is made up of many transplanted Northerners.

Hillgrove has been around forever. A Pittsburgh native, he’s worked in his hometown for some fifty years. Well liked, he will begin his 25th season with the Steelers this August. Bill was a visible television sportscaster in the Steel City for years and continues as Voice of the Pitt Panthers, a mic he’s held since 1974. Lange brings his unique style and phraseology to Penguins radio broadcasts. After the 1974-75 season, his first with the Pens, Lange left the Pens because the club was bankrupt and there were no job assurances. He returned  in 1976 and hasn’t left since.

Fifty years with one team is good for second place in all-time MLB seniority behind Vin Scully’s 67. Matthews has seen every Royals player come and go, having started with the franchise when it launched in 1969. There isn’t a baseball fan in the listening radius of the Royals expansive radio network who’s not familiar with his name. After all, his voice has represented a half century of summers in America’s heartland. Holthus is the longest tenured radio broadcaster in Chiefs’ history. He starts his 25th season this summer. There’s never a dull moment when Holthus presides over the mic. His energy is contagious.

Both Pats are loved and admired in Chicago. Hughes has become the Voice of Summer in the Windy City and had the good fortune to call the Cubs’ championship season in 2016. Hughes has become a mainstay, after starting with the team in 1996.  From Wrigley and beyond, he began cultivating a kinship with fans through his years teaming with Ron Santo. The two had an unpredictably to them, so much so, that together, they were called The Pat and Ron Show. Other than a couple of seasons away when he left the Blackhawks because of a difference of opinion, Pat Foley has been the team’s broadcaster since 1980; serving for the most part as either the team’s television announcer or calling games for a radio/TV simulcast. In recent seasons, he’s teamed with Eddie Olczyk. Foley is so popular that he got to throw out a ceremonial first pitch at Wrigley Field.

Not many get away with accidentally using the F bomb on-air. The impassioned Lamey did; for an incident in 2016. He’s been the Voice of the Colts for 31 years, beginning in 1984 when the team left Baltimore for Indy in the dead of night. Fischer, soft spoken and contained, has been the Voice of the Hoosiers in the best of times and the worst of times. He rode the crest of the championship years under the irascible Bob Knight and endured a number of failed reiterations since. Don is beloved. He’s been with the IU program for 45 years, has won 25 Indiana Sportscaster of the Year Awards and is a household name throughout the state.

After years with the Mets and national work on ESPN and elsewhere, the attorney turned baseball announcer brought his hearty laugh and friendly delivery to Orioles TV. He’s teamed up with Jim Palmer since 2007. Gary is somewhat unique and unpredictable at a time when announcing is becoming more commoditized. Holliday is a throwback. He spun records as a DJ for many years in markets like New York and San Francisco. He’s called Maryland football and basketball games on radio since 1979. He’s been in broadcasting for 62 years.

Durham comes from powerful stock. His dad, Woody, who died earlier this year, called North Carolina games for three decades. Wes built a following in Atlanta, first as play-by-player for Georgia Tech. Since 2004, he’s chronicled the doings of the Falcons. Wes is blessed with depth to his voice and an ability to present a play’s punchline grippingly. The name Holman is interchangeable with the Hawks. He’s presided over the team’s radio mic through thick and thin, invariably transmitting an enthusiastic spark, win or lose. A New England native and protégé of legendary Johnny Most, Holman starts his 34th season with the Hawks this fall.

After working the broadcasts of the Astros, Cubs and Yankees, Staats arrived in Florida the same year as the Rays,1998. Nothing like starting with a team from scratch. His voice has chronicled the team’s soundtrack from day one. Deckerhoff brings an infectious passion and husky voice that’s familiar throughout the state; from his football years with the Bucs and Florida State. He may call the Bucs “we” on-air but when tuning Gene in, you would never know which team is winning or losing. Deckerhoff always exudes a feeling of good fortune. The game is the thing and he’s delighted to be a part of it. The feeling is contagious.