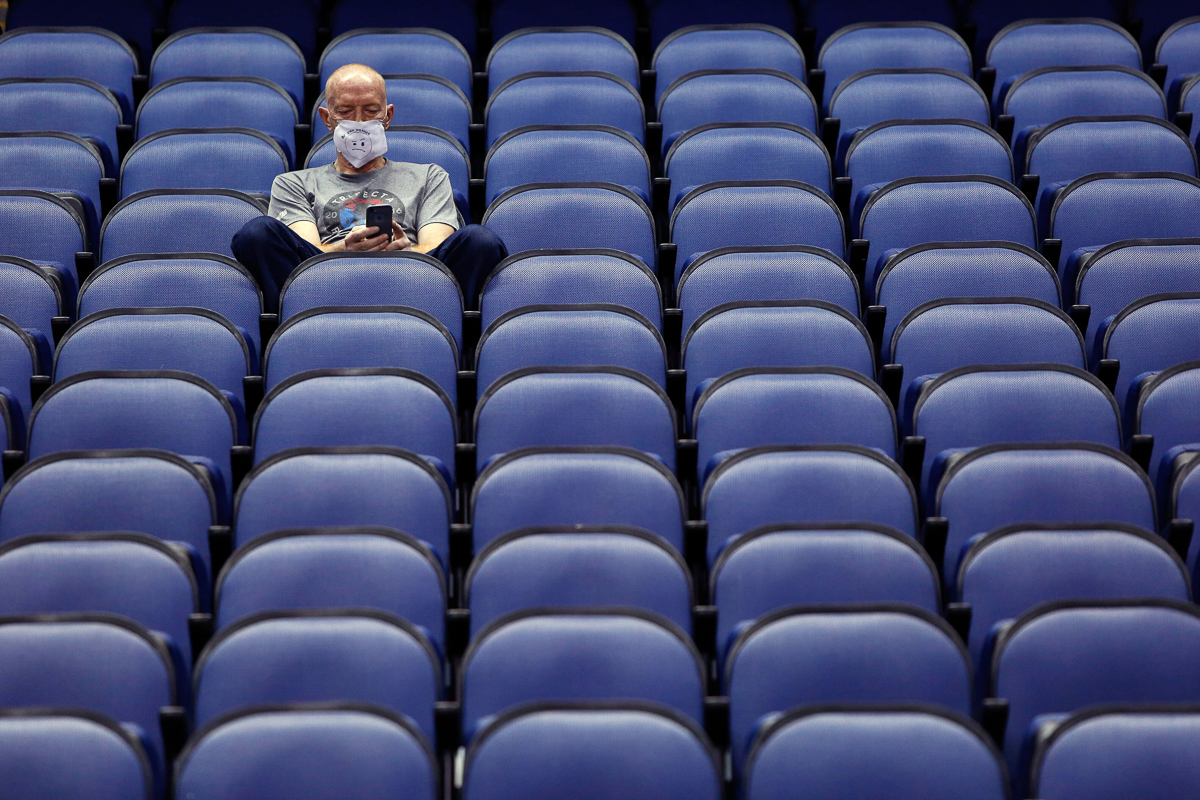 Years ago, I asked a sportswriter to share his most difficult challenge.

His answer was ‘staring at a blank page.’ Those who’ve done it will understand. Filing a story on a tight deadline is daunting. But until this new ugly word coronavirus brought sports to a halt, writers had material to cover.

No games, no stories. No elephants, no circus.

How about for those with a gift for gab? What now?

ESPN is scrambling for programming, for its mainstream channel and the others available on cable. Then apps, ESPN3 and ESPN+. It has already cancelled production of Pardon the Interruption with Mike Wilbon and Tony Kornheiser.

At least, the television programmers can run old barn burners, athlete profiles or even sports movies if they choose. But how about the national radio hosts who are required to ad-lib and extemporize with a sense of gripping conviction? They have to fill three to four hours every day.

They certainly didn’t run out of topics Monday. There were no shortages of words coming out of their mouths the first day after a barren weekend.

Dan Patrick interviewed Iona’s new coach Rick Pitino.  The fact that the beleaguered coach landed a gig again was the biggest college basketball news of the weekend. Rick was asked whether he had pursued the St. John’s job before Mike Anderson was hired last summer. Pitino said no. But the former Kentucky and Louisville championship coach admitted he had an interest in Providence, Michigan and Holy Cross but things didn’t materialize.

Pitino said that he’s delighted to be back at a small Catholic school which has a relatively new president who’s looking to grow the institution. A winning basketball team, Rick says, will bring attention to the college and foster a sense of camaraderie on the campus. Rick said that he owns an apartment in Manhattan which is a twenty minute drive. I’m not sure Rick factored in any traffic.

Pitino would like to schedule Kentucky but not Louisville!

I liked the two-way between Patrick and Pitino on the subject of the three point shot which is more prominent than ever. Emphasizing the three at Providence in the 80s helped Pitino and the Friars advance  to the Final Four in 1987.

I do wish that Patrick would have raised the concern that the NCAA might have with Pitino, after the ugly incidents at his last stop, Louisville. Pitino said he was exonerated by the courts. Another good question would have been about Rick’s son Richard who hasn’t exactly excelled at Minnesota but is managing to hold on to his job.

Patrick also had frequent guest Reggie Miller on his show to talk about the NBA.

The NFL will be in the mix constantly during these inactive days. As such, Patrick had on former Ivy Leaguer Ross Tucker to talk free agency.

Rich Eisen had the accomplished Brent Musburger on his show. He was interesting as usual. Brent who’s now based in Las Vegas admitted that because sports is essentially closed down, he and his family headed to their home in Montana. The two engaged in a range of topics beginning with the lack of vibrancy on the Vegas strip. “It’s deserted,” Musburger said. “Casinos are being shutting down.”

Because of coronavirus, Las Vegas has lost the opportunity to host the NFL Draft but Brent pointed out that there will be other drafts down the road and the Vegas stop will be rescheduled.

Brent, 80, told Eisen that despite the Tom Brady rumors, he thinks Derek Carr will be quarterbacking the Raiders this fall. Brady, he says, is a better fit for the Chargers because they’re the number two team in Southern California behind the Rams and could use a lift. Brady would help galvanize the football community, Musburger thinks.

Always chock full of information, Musburger talked about the new stadium which is still being constructed. Given the coronavirus factor, there might be concern down the road of construction workers clustering during times when social separation is being encouraged. What he didn’t touch on is the fact that the naming rights to the new stadium has been purchased by Allegiant Air. Who knows if this smallish airline will have the dough to pay the bills!

Brent added that his inquiries have led him to believe that the NFL season will begin in Kansas City on September 6th, noting that MLB has been approached about clearing its schedule there for that day.

Jim Rome had Patriots tackle Marshall Newhouse on his show to talk about the collective bargaining agreement, Leonard Hamilton, the Florida State basketball coach to discuss the cancelled NCAA Tournament. Leonard said the decision was painful but the right one. They’re beyond his control, he stressed.

Colin Cowherd hit football hard. He addressed Brady’s future. He had tweeted, “Interest in Tom Brady is drying up. I think he’ll remain with the Patriots, but I also think the Chargers are the perfect fit for his current 42-year-old skill set.”

I suspect that the conversation over the next few weeks will be mostly NFL.

Other topics will include:

I can tell you Brent’s right about the Strip shutting down. And I have a dear friend with Allegiant who assures me, they have the dough!

At this time, I’m reminded of rain delays when announcers had to kill time. Mel Allen supposedly could do an hour on the infield fly rule. The Cubs used to stay at the park and do interviews, and one time they wound up with Tim McCarver doing his Harry Caray imitation in front of Harry. Spoiler alert: it was really good.