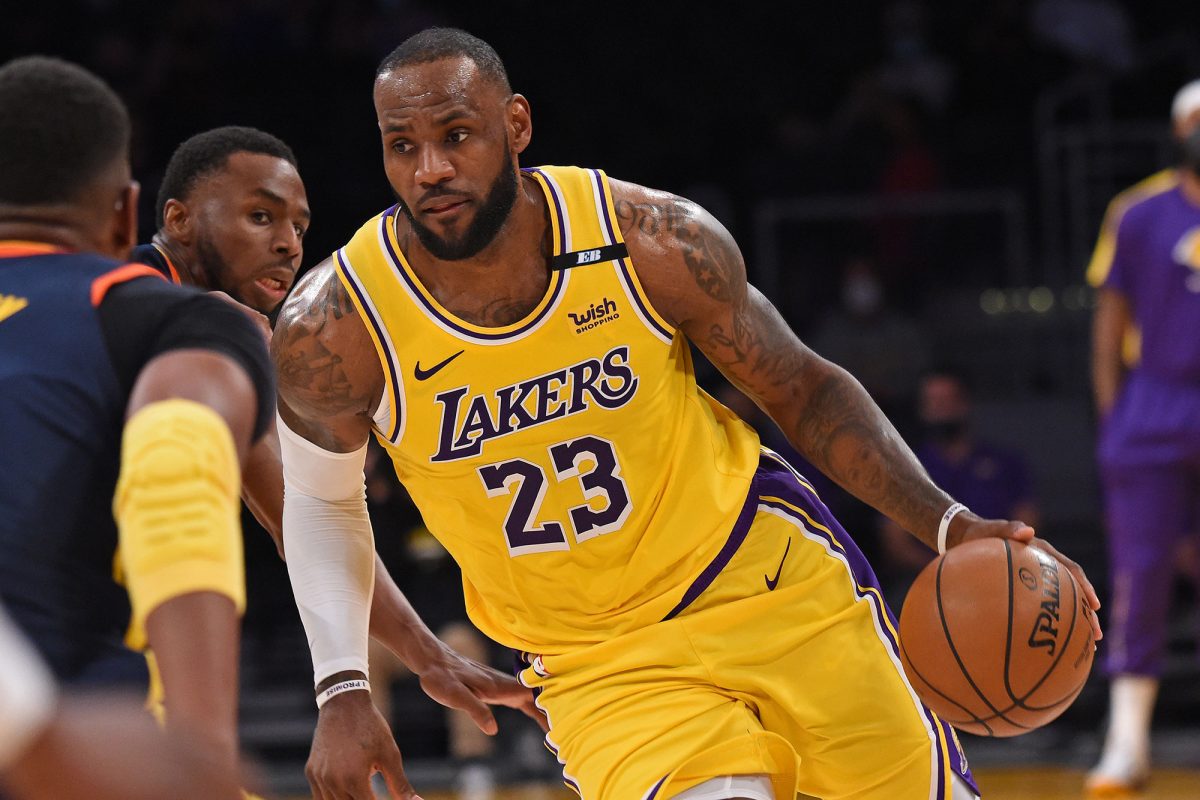 Aside from a couple blowouts, the NBA playoffs on either Turner, ESPN or ABC have been fun to watch.

But wait! Something semi-sinister warrants our attention.

Pulling announcers from arenas and asking them to call plays instantly and unhesitatingly off monitors is unreasonable. Frankly, it’s a terrible disservice to both the announcers and more importantly, viewers. Experienced voices from veteran Marv Albert down must feel like carpenters without tools or referees with a patch over one eye.

When sports resumed after months of cancellations last summer, ESPN was at least transparent about how they went about their business. Fans watched as announcers like Dick Vitale sat at their work stations at home doing commentary.

But now that a degree of normalcy is slowly returning, it’s time to have basketball voices where they do their best work, arenas. It’s where they see everything, can smell the popcorn and absorb the cheering of the returning crowds. It’s all part of live reporting. They can look at responses from owners seated in the expensive seats. They can see what’s developing off the ball or on the benches. They’ll see the body language. It’s all necessary. Let’s end this half-pregnant nonsense.

Turner and ESPN to somewhat of a lesser extent, are guilty of serving up an inferior product during these playoffs. The announcers won’t go on the record about the hindrances they face but management decision is misguided. Importantly, it’s the last thing that the NBA networks need in a climate of receding ratings.

Games have been tight and some have been absolutely gripping. So why put the voices in flawed positions where they have to guess on basic matters of who scored or committed a foul, who blocked a shot and so on. How do television analysts assess games and performances when they can’t see lots of the activity away from the ball? They’re limited. The crowds are back. Why not the talent?

I felt particularly bad for Kevin Harlan this past weekend. He’s a master at painting or captioning a picture. But even Picasso would be limited calling a matchup hundreds of miles away through a blurry lens and an obscured monitor. There were palpable delays in Kevin’s call. A couple times a team scored, but it was hard to immediately ascertain whether the ball actually went through the rim. Kevin had to wait to see whether a member of the opposing team stepped over the baseline to inbound the next possession. Some announcers had to guess and correct themselves if they were wrong.

Marv Albert got the hang of it a bit better Sunday on Washington-Philadelphia, after he struggled earlier with the bad hand that he and his colleagues were  dealt. Marv smartly backed off until he was sure that what he thought he was seeing actually happened.

On a couple of occasions, the gifted Harlan said something like, “Memphis scores two more,” until he was able to confirm the payer. This happened when there was a gaggle of upstretched arms in the lane. Unless you’re there it’s impossible to consistently call it perfectly. The point guard turned sesquipedalian Walt Frazier might call the networks’ decisions asinine.

Full disclosure? Turner has been the worst. No declarations. Unless you ask, you won’t know. And the place is run by the same guy who oversees CNN, a news network. Imagine asking CNN’s White House correspondent Kaitlan Collins to cover the president from somewhere in her native Alabama. How would that work out? Yes, President Trump’s old nemesis, Jeff Zucker is presiding over this monstrosity. I can imagine what the Foxies are saying to themselves. If WarnerMedia (owner of CNN and Turner) can taint the news, it can’t taint sports too!

What’s senseless is the fact that Turner is traveling all the announcers to Atlanta to call games from its hub. Why is it safer or even more cost effective  to travel to Atlanta than it is to Denver or other NBA venues? If this is being done for Covid precautions, why is Turner making the announcers travel at all?

Marv and Ian Eagle live in the New York area, Spero Dedes, Reggie Miller and Jimmy Jackson live out west and Harlan in Kansas City. They can all work, as ESPN does, at their home studios. That would be the safest bet!

Now, if Turner at least acknowledged on-air  that the announcers are off-site, viewers would adjust the expectation levels of the announcers. But the voices say nothing, probably due to bosses’ orders. Making talent walk a tightrope without a net is uncaring.

Here’s how the networks produced this past weekend’s games.

on Sunday, Mark Jones was on the Suns call over ABC. As you can see by the listing above, he and his teammates were there, in the Valley of the Sun. Jones has covered the NBA for years and is second on ESPN’s NBA depth chart. Mark has a  command of the language and his delivery is smooth. Van Gundy and Jackson keep getting better and better and more so than ever they’ve become the soundtrack of the NBA playoffs. Both come off as honest and as a duo who won’t pull the wool over viewers’ eyes.

JVG talks only when he has something of interest to say and isn’t intimated by his own silence. As the late Harry Kalas said, “I only talk when I have something material to say.” What I like about Jackson’s analysis, is that it’s emotionally driven, based on his extensive experience of playing and coaching in the NBA.

When Jackson and JVG are teamed with Mike Breen and when the game allows it, the broadcast often evolves into a popular three-way conversation. On Sunday, Jones was crisp, economical and refreshing. He sprinkled in some anecdotes and interesting factoids while keeping his eye on the ball. Three-man broadcasts can be a bit cumbersome and tricky. It takes time to develop a perfect symbiosis.

On Friday, Breen and his two partners were in San Francisco for the Memphis-Golden State dandy and the  announcers couldn’t have been given a better game. They responded nicely. We’ll see what no Steph Curry means to the struggling NBA ratings.

Marv Albert, who’s completing his long NBA career this spring, worked nicely with Grant Hill on the Sixers-Wizards matchup Sunday afternoon on TNT. What I remember more so than anything else was the genuine excitement in Marv’s voice when he promoted the first game of Turner’s evening doubleheader between the Knicks and Hawks. “Madison Square Garden will be rocking,” Marv projected, knowing that the capacity limit had been increased to 15,000 and that every last available seat would be occupied. Marv would know. He’s been calling NBA games in the building since it opened in 1968.

The brilliant work by 87 year old Hubie Brown on ESPN’s Milwaukee-Miami telecast was a highlight. Hubie never gropes for the right name or word. He and the Suns voice, 88 year young Al McCoy, continue to amaze. They’re winning the war against than father-time!

Dave Pasch is solid, be it on the NFL, college football, college basketball or the NBA playoffs. He had the Dallas win over the Clippers, Saturday. But I’ve not warmed up yet to his partner Richard Jefferson. At times, he lacks life. Then there’s Jason Benetti, or Dick Enberg junior, whichever you’d prefer. Jason may never admit it but Enberg had to have had an influence on his style. Jason’s intonations and voice cadence trigger reminders of the late Enberg. Benetti can sneak in an anecdote seamlessly and entertainingly. Benetti’s partner was Vince Carter. The grade on Vince is incomplete. I haven’t heard enough of him. He certainly got his reps in the NBA, playing 22 seasons.

An interesting crew worked the Knicks-Hawks game. Spero Dedes, a New York area fellow, was on the play-by-play call. He’s from New Jersey, attended Fordham and spent time as a Garden employee, calling Knicks games on radio and television. He was still in his 20s when calling Lakers games before coming to New York.

Greg Anthony was his analyst. Greg was a Knicks point guard in the 90s. Anthony’s broadcast career sparkled early. He had elevated his game to the point where he was on Jim Nantz’ number one team covering the Final Four. But he was arrested in Washington DC for soliciting a prostitute and it tainted his on-air career. He ended up losing his cherished gig at CBS.

America is a country of second chances. Years later, Greg was hired by the NBA Network and he’s getting some visibility on Turner too. But these two former Madison Square Garden employees were not in the the magical building. Like the other Turner voices, they were in Atlanta.

Anthony still has to get back in the flow of things to get a better spot on the Turner depth chart. He made a good point or two mentioning how both teams are young and don’t have much playoff experience. It is a big deal he said because the playoffs are officiated differently. Plays that were fouls during the regular season, are not in the playoffs. So Greg pointed out that as the series evolves, players will get used to the physical nature of the playoffs.

While Dedes delivered the play-by-play goods well, he could have set up Anthony a little more to get him back in the groove. One thing about Spero, the electricity in the Garden stimulated him. You could sense the quiver in his voice during the tight finish.