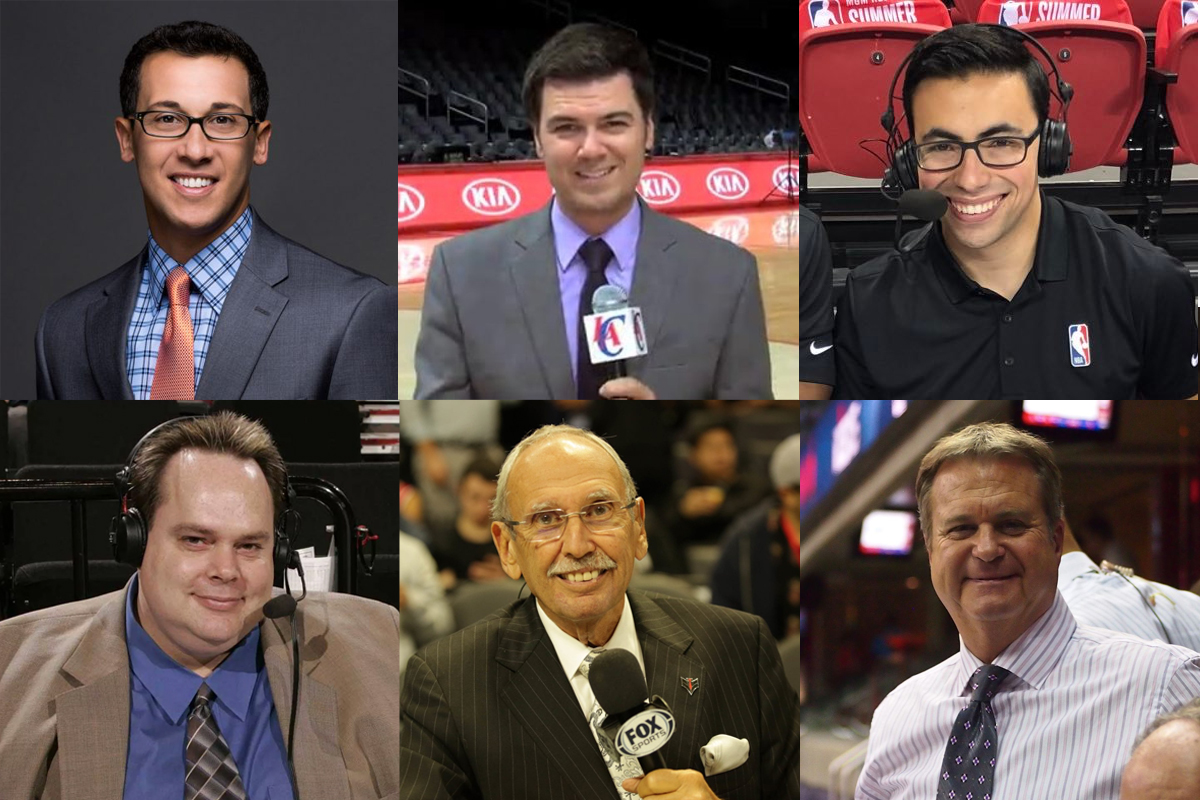 The winds of change are blowing across NBA broadcast tables.

With the retirement of Ralph Lawler, the Clippers will promote Brian Sieman to television and Noah Eagle will be named the team’s new radio announcer.

Sieman was the team’s rapid-fire radio announcer for a decade. He gave way to Lawler when Clippers games were carried on national television. On those occasions, Lawler presided over radio.

Despite a glut of interest in the radio role from veteran announcers, the Clippers are choosing Eagle, 22, who’s highly touted but vastly inexperienced. Sieman too has limited television experience.

Eagle has never done a regular season NBA game. To my knowledge, only Marv Albert called one at a younger age, doing so as a fill-in for his mentor Marty Glickman on January 27, 1963. Marv was 21 years and 8 months young when he did a Knicks-Celtics game at the old Boston Garden. Albert was 26 when he was named the Knicks fulltime voice in 1967.

Two years later, in 1969, Noah’s dad, Ian, was born. The elder Eagle is an NFL and college basketball announcer for CBS. The younger Eagle was a finalist for the Jim Nantz Award, honoring the most outstanding collegiate sportscaster. The winner, announced in May, was Drew Carter who like Eagle is an SU 2019 alum.

In all, six of the top twenty finishers for this year’s Nantz Award were affiliated with SU’s Newhouse. Eagle has done NBA Summer League games and pre and post work for Westwood One.

Moving from radio to television, Sieman’s call will require a major adjustment, something he’s quite capable of making. Brian’s knowledgeable, well-schooled, articulate and never gropes for the right word.

Too often though, his call on radio was frenzied and somewhat hyperbolic. Not every quarter of every contest merits the treatment of game seven of the championship series. Brian paused too infrequently, delivered an avalanche of information and produced a deluge of clichés. (Joe Tait, where are you? These newer voices need a little training.)

Television of course is a matter of captioning the picture levelheadedly and in measured intervals. Sieman will get it done. It’s easier to apply the brakes than to accelerate.

Word in Los Angeles is that the Clippers are still searching for a television color commentator. Once the position is nailed down, the wholesale changes will be officially announced. Last year, the team used rotating analysts.

Lawler was one of the highly touted quartet of voices covering local Southern California teams the last generation. The others were Vin Scully of the Dodgers, Bob Miller of the Kings and Chick Hearn of the Lakers. They’re all now a matter of broadcast history, yet will always be remembered for magnificently painting or captioning pictures on both radio and TV. There were additional special voices too, Dick Enberg of the Angels and Rams and Bob Kelley of the early Rams.

Other NBA moves were made recently that are worth noting.

Justin Kutcher and Drew Gooden have been hired as the television announcers for the Washington Wizards. It is also likely that former NBAer Caron Butler will join the broadcast from time to time as an analyst. (What is this with alternating announcers? Do viewers now need scorecards or do they even care who their announcers are? Welcome to our indistinguishable world of sports broadcasting!)

Kutcher did play-by-play for Fox, mostly NCAA football and basketball. He has a nice breezy style. Prior to Fox, he was with ESPN. In all, he has 17 years of experience calling games. Gooden had a 14 year NBA career after starring at Kansas. (Lots of NBA years – bigger pension. Gooden should be getting at least 200k per year at age 62.) He did some color work for the Wizards the past couple seasons, now he will be the primary analyst.

Steve Buckhantz who called Wizards games for 22 seasons wasn’t renewed. He and former Cal-Berkeley and Wizards star, Phil Chenier were a 20 year television duo. Chenier’s fulltime color role ended a couple seasons ago when he was replaced by Kara Lawson, the former Tennessee and WNBA standout. But Lawson left this past June to take a coaching position with the Celtics.

For Buckhantz, it has been a frustrating few months. He told 106.7 the Fan in DC that his renewal option with regional cable’s NBCSW wasn’t executed this past March and that he hadn’t heard a thing since. Then came the announcement of Kutcher’s hiring. Buckhantz was most disappointed by the fact that he never heard from team owner Ted Leonsis or son Zach.

Steve said that the two could have saved his job. Damon Phillips, the GM of NBCSW insists that the decision was exclusively the network’s, not the team’s. Frankly, it sounds like Phillips is playing the role of the fall guy, the fellow taking the hit for firing the popular Buckhantz. His claim is rather hollow. In virtually every contract I’ve seen, the team has final approval over the announcers.

This said, the club and the regional cable network are more intermingled than most partners. The Wizards now own a piece of the network and have a couple seats on its board.

In New Orleans, Tony Graffagnini joins the Pelicans as the team’s radio play-by-play voice. He’ll follow Sean Kelley who’s joined ESPN Radio. Kelley had been with the Pels since 2005.

Graffagnini called Tulane baseball, basketball and football for 17 years. When the Hornets were in New Orleans before they returned to Charlotte, he did pre and post game shows on their broadcasts.  Kelley, who too is a former Tulane play-by-player, calls his first college football game for ESPN on August 24th, Miami vs. Florida.  Away from basketball, Kelley serves as a firefighter with St. Tammany Parish Fire District 13.

Meanwhile, in Portland, Brian Wheeler, arguably the league’s best radio play-by-play announcer, will not return. Wheeler has been battling medical and obesity issues. It is hoped that he will rid himself of these burdening ailments and put his excellent talents to work at some point somewhere soon. Brian has a God given talent to do play-by-play. No successor for Wheeler has yet been announced. Travis Demers succeeds him.