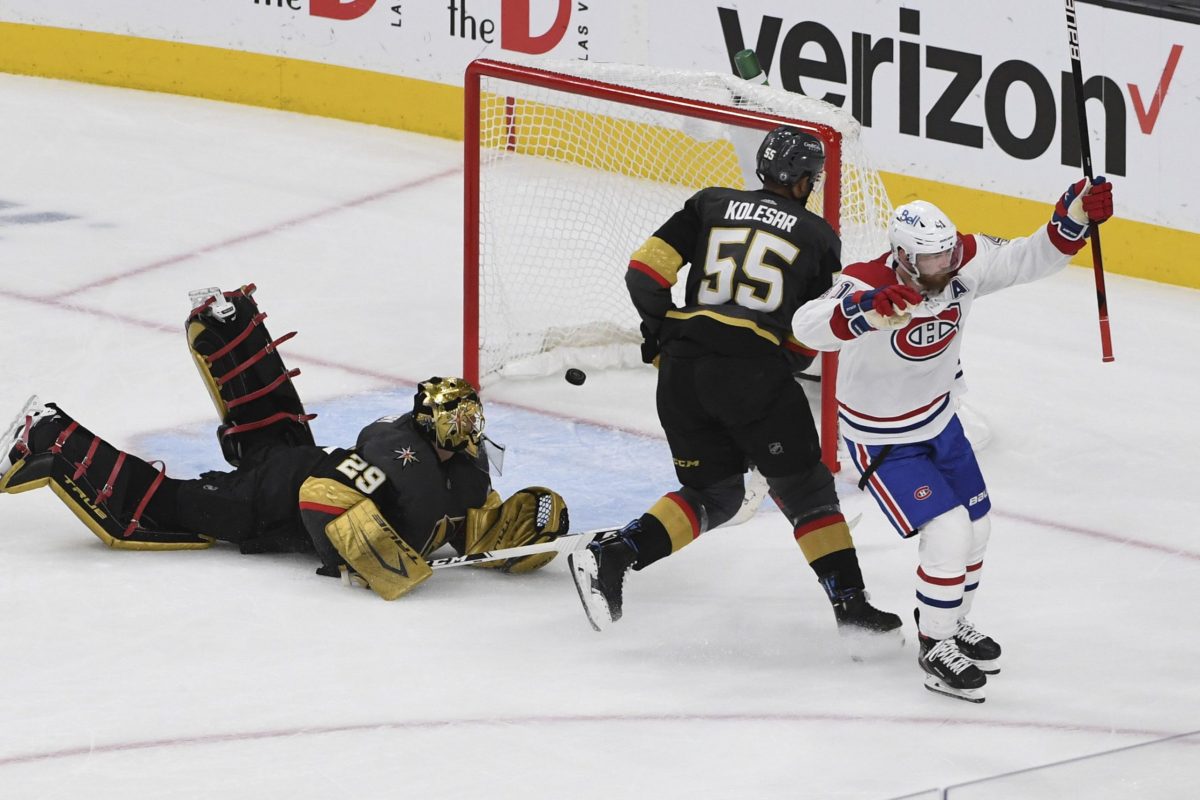 A Weekend With Eric Bean: Observations of NHL and Auto Racing Coverage

I hope all dads out their had a great Father’s Day. I spent Father’s Day with my dad, and we watched auto racing in the morning. I also was able to catch the end of some of the weekend’s hockey games and watched Game #5 of the New York Islanders-Tampa Bay Lightning series on Monday night.

As always, I was paying attention to what the announcers were saying during the games and had some thoughts on it. My ten observations start below.

I was able to catch some of Game #3 of the Vegas Golden Knights-Montreal Canadiens series and the wild end that gave Montreal a 2-1 series lead. Vegas has since tied it, but I was intrigued by how Montreal’s game-tying goal in Game #3 was covered:

1. Kathryn Tappen and the rest of the studio team voiced how they felt bad for Vegas goalie Marc-Andre Fleury for his miscue on Montreal’s game-tying goal with 1:55 remaining in the third period. However, NBC Sports decided to show the goal at least five times through the intermission and on the lead-in to overtime from the broadcast team of John Forslund, Joe Micheletti, and Pierre McGuire.

Points 2-4 are from the Formula 1 French Grand Prix. Sky Sports produced the telecast, which was simulcast on ESPN in the United States.

2. In general, Sky Sports does a great job of building up the races without overhyping it. F1 and the FIA do enough to sensationalize their sport. The commentators on Sky Sports do a good job of telling you what’s going on during the race and providing insightful analysis. The announcers didn’t say anything that was too over the top, and the broadcast was enjoyable.

3. Sky Sports tends to do a good job of leading into team radio soundbites. For example, being able to hear Mercedes strategist James Vowels tell Lewis Hamilton, “This (second place finish) is on us,” added context to how the race unfolded. Red Bull’s Max Verstappen won the race and stretched his championship lead to 12 points. Hamilton was not combative with Vowels, as he said, “All good, man. We still got good points (after finishing second).”

4. Hamilton’s old teammate and bitter rival Nico Rosberg was on the Sky Sports broadcast. Rosberg was critical of how Hamilton did not try to do more to stop Max Verstappen from overtaking him for the lead with two laps left in the race. “Close the damn door,” Rosberg exclaimed. It was interesting (and a bit funny) to hear Rosberg be so critical of Hamilton. If you are unfamiliar with F1, there are plenty of clips on YouTube that chronicle Hamilton and Rosberg’s rivalry during their time as Mercedes teammates from 2013-16.

Points 5-7 are from the IndyCar race at Road America. The race was on NBCSN, with Kevin Lee and Townsend Bell commentating.

5. Team Penske’s Josef Newgarden got the pole and led throughout the race until his car went into emergency mode on a restart with two laps remaining. He was passed by Alex Palou of Ganassi racing. It was another unfortunate break for Penske. NBC Sports did a good job of painting the picture at the beginning of the race about Penske’s struggles, as the team has not gone this far into an IndyCar season without a win since 1999.

6. There was a NASCAR race on NBCSN directly following the IndyCar race, and NBC regularly reminded viewers throughout the race. Sometimes, networks should lay off promotion and focus on the game at hand. The promotion for the NASCAR race got out of hand. It was annoying and took away from the IndyCar race.

7. Kevin Lee did a good job of filling in for regular turn-by-turn commentator Leigh Diffey. Lee did not overhype the race as much as Leigh Diffey did, which was refreshing for viewers. However, he might have overhyped Palou’s now 28-point championship lead, calling it a “stranglehold.” In IndyCar, a race winner can get a max of 53 points for a race victory, so Palou’s lead could vanish in two to three races. Lee jumped the gun here.

Points 8-10 are from the New York Islanders-Tampa Bay Lightning Game 5 of the NHL Stanley Cup Semifinal series. Tampa Bay took a 3-2 series lead, and the game was broadcast on NBCSN.

8. Brendan Burke filled in for play-by-player Kenny Albert who was attending his daughter’s high school graduation. Burke is the Islanders’ play-by-play man on MSG Network, yet did a good job of staying neutral. Burke was solid. The only time he might have slipped slightly was when he emoted that “there might be plexiglass” behind Tampa Bay goalie Andrei Vasilevskiy’s net.

9. In the studio, analyst Dominic Moore brought up a great stat about how the Lightning have played better 5-on-5 during their winning Stanley Cup run last season compared to this season. All three of Tampa Bay’s goals in the first period of its 8-0 victory were 5-on-5. It provided interesting context.

10. Another note from the studio: NBC Sports decided to use its background screen when Kathryn Tappen (left) led viewers into the second intermission. The network showed a different angle, Tampa Bay walking into its locker room. If NBC continues to use this studio during the Stanley Cup Final, it should utilize the backdrop screen more. When the studio voices are talking about an individual player, how about a shot of the players skating?

It will be interesting to see how NBC Sports covers the end of the Conference Semifinals and the beginning of the Stanley Cup Final, given how this is the last season the network is covering the NHL. NBCSN has had two-hour on-site pregame shows in years prior to the pandemic, but it has had to make adjustments this season because of its commitments to carry the Olympic trials. The Stanley Cup Finals, in all likelihood, will end about two weeks before the Olympics start.

It will be unusual to see NHL games on ESPN and Turner Sports next season. College students my age have grown up watching the NHL on NBC or NBCSN (previously Versus and Outdoor Life Network). NBC has always produced NHL games well and I for one will miss the NBC Sports/NHL theme song next year.

Nonetheless, it will be good to see the Stanley Cup Finals played in home arenas this season as opposed to last year when the pandemic forced many limitations.