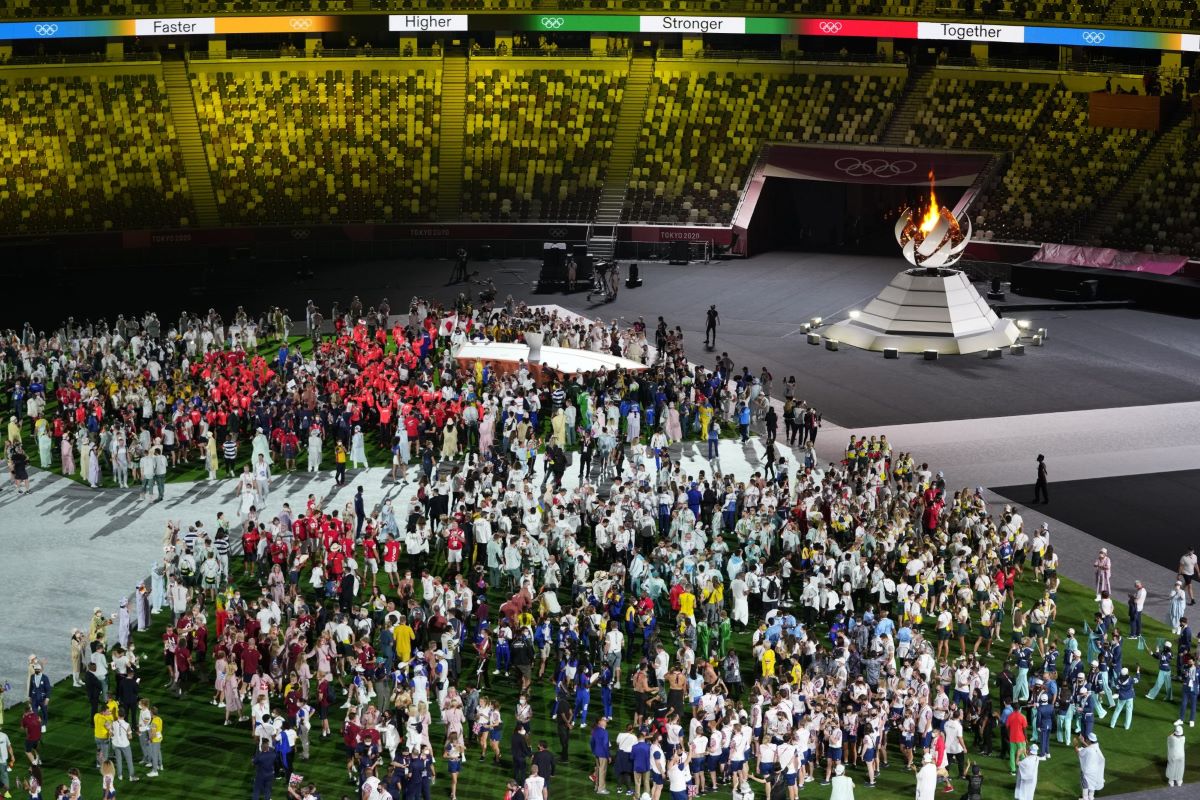 Go back for a moment to a Variety story on April 14th.

It set NBC’s first Olympic mission:  “Before NBCUniversal broadcasts a single Olympic event, it must compete in an event that might be seen as Olympian: convincing millions to tune in to the Games when they air this summer.” Then foreign spectators were banned from attending the games because of fears of making the Covid-19 problem in Japan worse than it was. And on July 8, the Associated Press reported that “Japan is set to place Tokyo under a state of emergency that would last throughout the Olympics, fearing an ongoing COVID-19 surge that will multiply during the games.”

The more than yearlong controversy of holding the Tokyo 2020 Olympics in 2021, despite warnings from health officials that it could be a Covid spreader, probably gained more pre-game publicity for an Olympics than normal, albeit  not the type of publicity that NBC Universal and its sponsors wanted. So Covid-19 became the biggest story associated with the Tokyo games.

Before I opine on how I believe NBCUniversal’s game announcers dealt with the health and other controversies that occurred during the Olympics there is an important fact that must be considered: Money.

An analysis of any sport is incomplete without mentioning the part that money plays in formulating or dictating policies. It’s no secret that NBC, the IOC and game sponsors wanted the games to be played. Consider the money that NBC and the IOC would lose if the games had been canceled, and the sponsors because of the visibility that their products would receive.

According to Variety, “the Olympics represents an enormous amount of business for Comcast’s NBCUniversal every two years, from $2 billion in ad sales and sponsorship deals to programming across its portfolio of broadcast and cable networks, and now to be extended to the fledgling streaming platform Peacock.”

Also, The Hollywood Reporter said, “the Olympics represents an enormous amount of business for Comcast’s NBCUniversal every two years, from $2 billion in ad sales and sponsorship deals to programming across its portfolio of broadcast and cable networks, and now to be extended to the fledgling streaming platform Peacock.”

In past Olympics that were played in totalitarian countries, the American networks covering the games, when not televising sporting events, acted as public relations arms of the IOC and host countries. Non-sports commentary were mainly about heroic stories of individual athletes, soap opera -like tales of athletes overcoming tough times or as a travel documentary, always playing up the friendliness of the people and culture of the countries, omitting criticism of the many, oppressive governments, because the IOC and its sponsoring partners want to portray the Olympics as the world’s party, when in reality it is often played in countries that are the world’s tragedies.

Unlike totalitarian countries that have hosted the games, Japan is a full-fledged democracy. But because of the Covid-19 situation and calls from Japanese health officials and citizens that the Olympics be canceled or postponed, covering the games as the “world’s party” would be as hypocritical as the IOC claims that its games foster better relations between countries.

As an old Olympic hand, I have been involved on the sponsor side as well as countries’ organizing committees. I have also been an advisor to Olympic hierarchies, and/or government officials involved in the Olympics, as well as being a media trouble shooter during the games at the Seoul Olympics in 1988 and have also lectured on media relations at an IOC media conference. But the part of the Olympics that has always most interested me was its sports marketing and political components, despite the IOC saying that politics has no place in the Olympics.

That’s why for this column, I decided to concentrate on the Opening and Closing Ceremonies and not stay glued to the TV set between July 23 and August 8, because watching the Olympics reminds me of watching the Super Bowl. Both have evolved into made for TV events featuring a string of commercials interrupted every few minutes with actual sports.

The commentary by Savannah Guthrie (left) and Mike Tirico before and during the Opening Ceremonies was at best satisfactory. While they didn’t hide the fact that the games were being played during the pandemic and that there were on-going protests against them because of it, they neglected to mention that as the Opening Ceremonies was about to begin protests were going on outside the stadium, and could be heard inside, and that the virus was raging in Tokyo as the games commenced. Tirico’s reporting was professional, not a surprise. His co-host Guthrie’s commentary sounded more like a commercial for the Olympics than a news report.

Particularly unjournalistic were Guthrie’s comment about the athletes, “When you keep your focus on them, when you think about them finally getting their moment, I think that’s why we’re still so excited to be here,” which immediately labeled the show as the hype programming it was meant to be. (Maybe she deserves kudos for not trying to camouflage what the program was meant to be – a hype to attract an audience.) Especially over the top was her, “There is no way around it: We are in the middle of a pandemic. These games are controversial, especially here, with many of the Japanese people worried about inviting in the world as the virus has spread,” Guthrie said. “But Olympic officials have pressed on, out of tradition to honor the work and dedication of these athletes and yes, in aspiration that somehow, sports still has the power to connect us and to heal us.” Who ever wrote that for Guthrie deserves a gold medal for hyperbole. Conversely, Lester Holt’s detailed, no holds barred report about the Olympics being held during the pandemic was the highlight of the show (Holt, left).It was journalistically superb, not a surprise to viewers who are familiar with his news reporting on NBC.

Despite all the hype over the past year leading up to the Tokyo games, the broadcast of the Opening Ceremony drew 16.7 million viewers, the smallest U.S. television audience for the event in the past 33 years.

What I was looking for during the Closing Ceremony commentary  was if the NBC commentators, would wrap-up the many controversies that occurred during the games: Raven Saunders of the United States, the silver medal winner in the women’s shot-put, raising her hands on the podium and crossing them in the shape of an X during the medal ceremony, saying that the gesture was to show her support for “oppressed people;” American fencer Race Imboden, after the United States took the bronze medal in foil, standing on the podium  with a circle “X” on his hand; Silver medalist  in the 200m backstroke American Ryan Murphy saying he was “swimming in a race that’s probably not clean”; Luke Greenbank of Great Britain, who took the bronze medal, saying in part, “It’s obviously very difficult not knowing whether who you are racing against is clean”; swimming analyst Michael Phelps, the 23-time Olympic gold medalist saying, “I can honestly say that throughout my entire career, I don’t know if I ever competed in a clean field”; Javad Foroughi of Iran, who won gold in the men’s 10m air pistol  being accused  of being a member of the Islamic Revolutionary Guard, which has been designated as a terrorist organization by the governments of Bahrain, Saudi Arabia and the United States, who dedicated his medal to Supreme Leader Ali Khamenei; Belarusian sprinter Krystsina Tsimanouskaya, who asked for asylum because she was afraid to return home after criticizing her coaches because they wanted her to swim in an events she hadn’t trained for.

Another controversy that was not referenced during the Closing Ceremony was China’s complaint that the network presented an incomplete map of the country during the Opening Ceremony. (Based on past performances if Bob Costas was still the voice of NBC’s Olympic coverage, these controversies would probably have received the journalistic attention that they deserved.)

Neither Tirico, during the hour-long lead-up show to the Closing Ceremony, nor Terry Gannon, Johnny Weir or Tara Lipinski, hosts of closing telecast, touched on the controversies. Instead all four acted as PR people for the IOC and NBC instead of journalists. Often missing from the commentary were explanations of the symbolism of what was occurring, surprisingly so, since they certainly must have had a script of what was happening.

Commentary in both the Opening and Closing Ceremony was journalistically sub-par. It appeared that NBC did not want to offend the IOC, the Japanese Olympic organizers or China, which will host the Winter Olympics just six months after the Olympic Flame is extinguished in Tokyo.

Even though the Olympic Flame no longer burns in Tokyo, NBCUniveral is not thorough with the Tokyo Olympics. Because of the low ratings throughout the games they will have to deal with give-backs or as they’re called at ad agencies, make-goods.