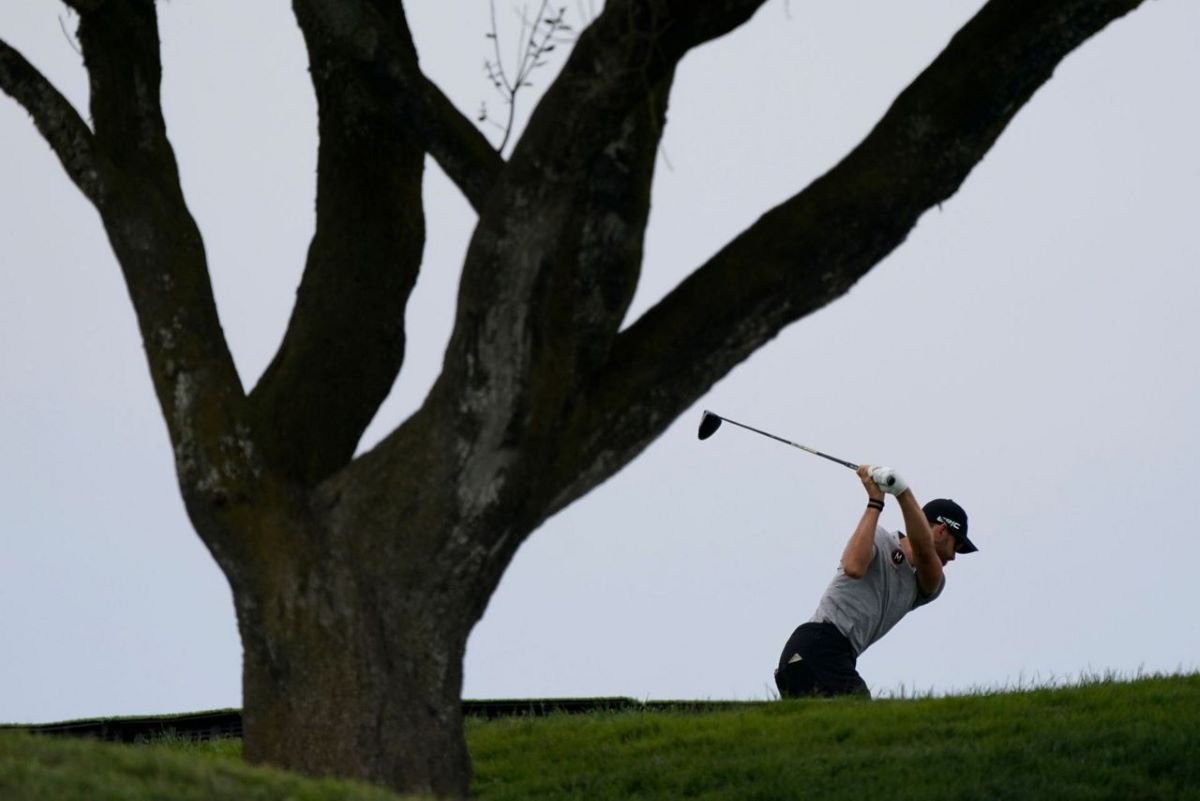 For sports fans who watched NBC’s production of the 121st US Open for a while, it had the feel of a Kentucky Derby and an NBA Game wrapped in one. It’s pretty safe to say that after hosting America’s national championship twice, (Tiger’s riveting win in 2008 being the first), Torrey Pines will remain in the rotation for as long as The USGA desires to go back to San Diego.

NBC delivered in a big way with one of the wildest, wackiest, mesmerizing…..well you get the picture, final major rounds in recent memory. That’s really where the grades come in because you know and I know that while the first three rounds were consistent in presentation, the fourth round was just dizzying and had viewers at the edge of their seats.

It was Derbyesque, in watching four players at one point holding the lead in the final round, while other challengers stayed in very close touch, a shot or two behind, only to fade at the three-quarters pole. It had the NBA feel, because tight games typically come down to a crucial late fourth-quarter possession. It is often then when game is decided. That was the head scratching, poor tee-shot by South Africa’s Louie Oosthuizen on the 17th which essentially gave the tournament to Jon Rahm, Spain’s first ever winner of the US Open and 4th Spaniard to capture a Major championship. (Seve Ballesteros, Jose Maria Olazabal, Sergio Garcia and now Rahm).

NBC captured all the drama superbly, elegantly and with ease.  Let’s get to the grades:

Executive Producer Tommy Roy-  A+.  I have never started the grades with a producer but its more than deserved in this instance, so let me explain. Usually, in a Major’s 4th round, you start to see that lead pack, maybe three or four players separate themselves and the majority of camera time goes to those competitors. Can you imagine what it was like in the truck when at one point you had four guys tied and five others within one or two shots of the lead and it was getting close to back nine time?

Had to be a madhouse. Roy and his team expertly delivered in a smooth and scintillating manner. Complete control with great visuals, (drones, airplanes) moving from critical shot to critical shot with ease. As one long time reader commented to me during the final round, “You know it’s crazy when there’s a big name guy that’s one shot back and we haven’t seen him in 15 minutes.”  It was Louie Ooshuizen and the reader was spot on. Televised golf has been described  to me as beyond chaotic.  Did the viewer ever feel as though the truck was in complete chaos when there was insanity in the final round?  Heck no and that’s why Roy gets the A+ for giving the viewer all the angles that were critical and developing in real time. (Winner Jon Rahm exults.)

The multiple views of Rahm’s winning birdie putt on 18 were phenomenal but let’s not forget the visual and audio when Oosthuizen knew he wouldn’t be able to go for the easy par 5 18th in 2 to try and tie up the tournament with a needed eagle. Watching his decision to lay up was a gut punch to him and the viewer.  Great stuff by Roy and his team.  Lastly, capturing Arizona State alumnus Phil Mickelson sitting on the range as ASU product Rahm, (who played for Mickelsons’s now caddy and brother Tim at ASU waited out whether he would go to a playoff with Oosthuizen was pretty cool, since Micklelson finished his round about 8 hours earlier.

Dan Hicks- Lead host and Play by Play-  A.  Hicks is steady and top shelf in this chair. Not overly flashy but knows how to perfectly encapsulate the moment without getting in the way.  Golfers know who knows golf and Hicks is that guy. With Rahm 3 holes ahead of the leaders and having his magical putt for birdie go in on 18 to take a one shot lead over Oosthuizen, he immediately made reference  to the fact that “3 different Spaniards have won Majors, is Jon Rahm in line to join them?”

Hicks accentuates just the right words at the right time and listening to that line had longtime golf viewers and even non-golf nerds understand, the impact of the putt. Furthermore as the leaderboard included Dechambeau and Koepka, Hicks made sure to reference what we were all thinking. Can you imagine if these two get involved in a playoff?  Ohhhhhh, the possibilities emerging for two polarizing players who have engaged in a public feud that has caught the attention of the sporting world. Hicks gave us what what we were all thinking and he didn’t disappoint.

Paul Azinger-  B+.  I’m a huge fan of Zinger and he fills this tough chair as well as anyone who has sat in it.  Loved his line early in the final round when he said Oosthuizen is going to have to win this with his putter and not his world class ball striking. Nailed it because late on the back 9, Oosthuizen was a little nervy with the flat stick coming down the stretch, coming up short a few times for the six time major runner-up.  So why the B+?  As the lead analyst, it’s not good enough to say, “not sure why these guys are fading but now there’s just 2 left……”. Referring to the likes of star players who were in that lead pack or close to it like Rory McElroy, Bryson Dechambeau, Brooks Koepka, Collin Morikawa, where it was a feeding frenzy for two hours as challengers lined up. This goes for all the NBC commentators. What were they seeing?  Were their swings changing due to pressure?  Were they not handling course conditions appropriately?  Taking too much risk?  I needed more.

Analysts- Gary Koch, Roger Maltbie, David Feherty-  B +.  Steady, the trio were their reliable selves but nothing overly memorable for me which was the reason for the B+. See above for missing the mark on some of the struggles of world class players in the final round. There was a window to give viewers more and it just missed the mark for me.  One thing this group does exceptionally well is give fans an understanding of how the ball will break on the greens. I will say that when McElroy had a pitch on a par 5 in the final round to get close for a birdie attempt they all immediately chimed in to say it was a mistake as he ran it by giving him a difficult downhill putt.

Jim “Bones” Mackay-  A.  Phil Mickelson’s former caddy turned on-course commentator has been really growing in this role and you can feel he’s connected in a different way to the course than others in this role.  He thinks like a caddy and is quick to provide commentary on the way a particular shot must be played before the shot is executed. Producer Roy explained this to me recently in our one-on-one interview as NBC’s ‘1st guess directive.’  In other words, say it before it happens and don’t second guess after the shot has been delivered.  Mackay does this particularly well, so Roy has to be very pleased with Mackay’s performance.

Steve Sands-A -.  Solid on the post-round interviews but a little awkward moment on 18 as an expected F15 flyover didn’t happen when he directed everyone to look skyward during the awards presentation and it didn’t happen. He shifted to another interview about a minute later after some awkward silence but it was a strange moment.  Certainly not his fault but the whole thing felt somewhat contrived.

The Golf Channel and Sirius US Open Radio Golf on Channel 92: As always they delivered superbly. I say this over and over again, for the golf aficionado. These are the go to places each day and night during a Major because let’s face it you’re usually not in front of your TV for 12 hours straight. Have to give a special mention to Paige Mackenzie at The Golf Channel. She was talking about the Vegas lines on Saturday night and as Rahm fell to +1100 after falling behind by three strokes entering the final round, Mackenzie suggested that Rahm was a good deal with these odds. Plenty of on-air time analyzing the bets which is a changing piece of the golf televised landscape but what better place to see this. Golfers bet. They want this stuff and Mackenzie delivered in a very understandable way.

Overall Grade for NBC-  A. This was all about a final round that had viewers attention from start to finish but had the multiple Emmy winner Roy’s fingerprints all over it. There was a lot to keep up with at  picturesque Torrey Pines and NBC delivered big time. While Tiger Woods’ memorable putt to get to a playoff in 2008 will forever be etched in our minds, Rahm’s winner will be played on reels for years to come.NBC knows golf and they do it well.  One more to go next month at The Open Championship at Royal St. George’s!  The Peacock will once again be there.