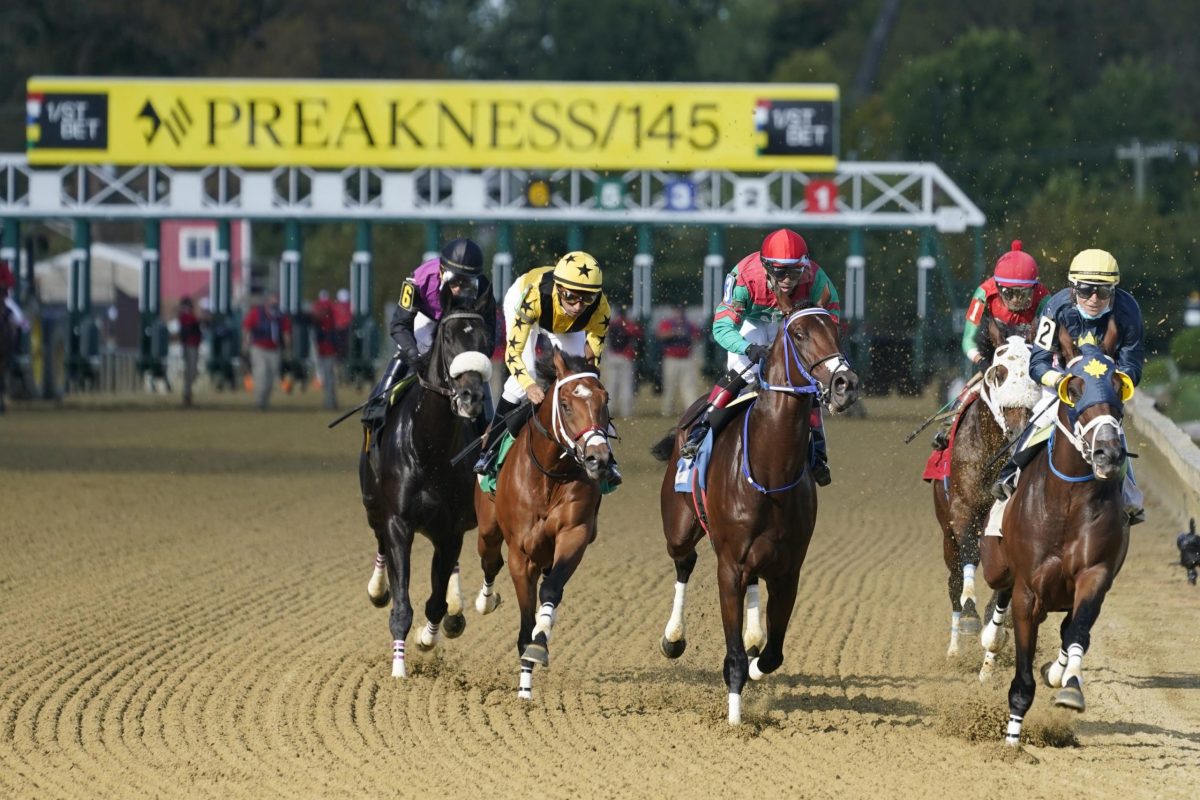 NBC’s Blimp Shot during the Preakness

NBC warmed up for next month’s two-day Breeders’ Cup extravaganza with a big swing and a miss while broadcasting the 145th Preakness Stakes Saturday. Compared to FS1’s daily Belmont and Saratoga race coverage, NBC flunked the test.

How do you cover a horse race from several thousand feet above the ground? Once favorite Authentic took the early lead in the Preakness, director Kaare Numme went to his blimp shot, and for the next half of the race the horses looked like dots on a map. Finally, as the filly Swiss Skydiver made a surprising move to the lead approaching the far turn, NBC switched back to a standard shot of the field that actually looked like horses running.

This is the problem with giving more cameras and equipment to producers and directors doing a big event: They think they have to use them. Numme, who has won several Sports Emmy Awards should know better. He could take a lesson from the great CBS Sports director Bob Fishman, who once covered a stakes race at Belmont with just one camera following the leaders all the way around the track.

The NBC problems didn’t end there. The network’s usually reliable race caller Larry Collmus, blew the finish. All the way down the stretch he called it tight between Swiss Skydiver and Authentic, but as they hit the wire, with Swiss Skydiver clearly in front (she won by a neck), Collmus bailed out, refusing to call a winner, saying, “It’s a photo finish.”

Of course it was, but it was also clear on TV and also to Pimlico’s in-house race caller, Dave Rodman, that the filly won. As they hit the finish line, Rodman’s call for the fans watching from betting sites, declared, “It’s Swiss Skydiver and (jockey) Robbie Albarado. They’ve done it!” It should also be noted that the Pimlico in-house camera coverage kept the picture on the leaders all the way around.

After watching Fox’s superior horse racing coverage from Saratoga and Belmont all summer, featuring Greg Wolff, Laffit Pincay III, Gary Stevens, Tom Amos, Acacia Courtney and Maggie Wolfendale, it’s hard to watch a big race with such sloppy coverage. NBC actually did a much better job last month presenting the Kentucky Derby. Hopefully they will scrap the blimp shot at the Breeders’ Cup and stick to their knitting.

The reinstatement of college football

On September 16th, USA Today’s columnist Christine Brennan wrote that the Big Ten’s decision to play a college football schedule was “the darkest day in Big Ten sports history—the day it caved. It choked. It got scared. It became the SEC.”

Brennan had laid out the case that the Big Ten had stood for “academic achievements and Great Lakes values.” She would know. She grew up in Big Ten Country. She went to Northwestern for undergrad and graduate degrees. She was proud of the Big Ten presidents when in August they said it was too dangerous to send college-aged kids out to play against a virus that can’t be stopped.

But when the SEC and other conferences began to play, the Big Ten started getting pressure from players’ families and also President Trump to play, and reversed their decision. Trump said he talked them into it but several Big Ten officials said he had nothing to do with it. What they didn’t say was that money had everything to do with it.

USA Today boldly labeled Brennan’s column as OPINION. She intimated that the President, “desperate to win votes in Wisconsin, Michigan, Ohio and Pennsylvania told the conference to play football …and they ended up giving Trump exactly what he wanted.”

Not everyone agreed. One tweet slammed her, calling her piece “liberal propaganda.”

There was nothing insensible about what Christine Brennan wrote. The Big Ten sold out as did every other conference by taking TV money. Covid cases continue to grow. Many college teams have been infected, not to mention the NFL, which takes greater precautions. It’s one thing for professionals to take a chance on playing since they’re getting paid. It’s another thing for unpaid college kids to risk these chances, not to mention the possibility of bringing Covid into their homes where parents and grandparents are at risk.

The Big Ten, the Pac 12 and other conferences have changed their minds about playing because of all the money that would be left on the table if they didn’t.

First, glad to see props to Christine Brennan for airing out the Big 10. I don’t say this as an academic or from being naive: What kind of example are they setting when they do that?

Second, when I saw the headline about the Preakness, I thought to myself, Bob Fishman was the best at horse racing, and he used to do the Belmont with one camera all the way around. Tony Verna would change cameras but you still could tell what was happening. A blimp? Sheesh.

As a long time horse racing fan/bettor and a former Tv Sports Associate, I can tell you what an absolute waste of coverage the blimp shot is on live race coverage. Now, as for use on a replay for a specific purpose perhaps that high above angle is useful. A better camera shot would be the standard one used by the race tracks when covering live races. Check out top race tracks and their coverage is simple, basic and straight forward which provide the best tv coverage. I always make sure to find any race NBC shows online from that… Read more »