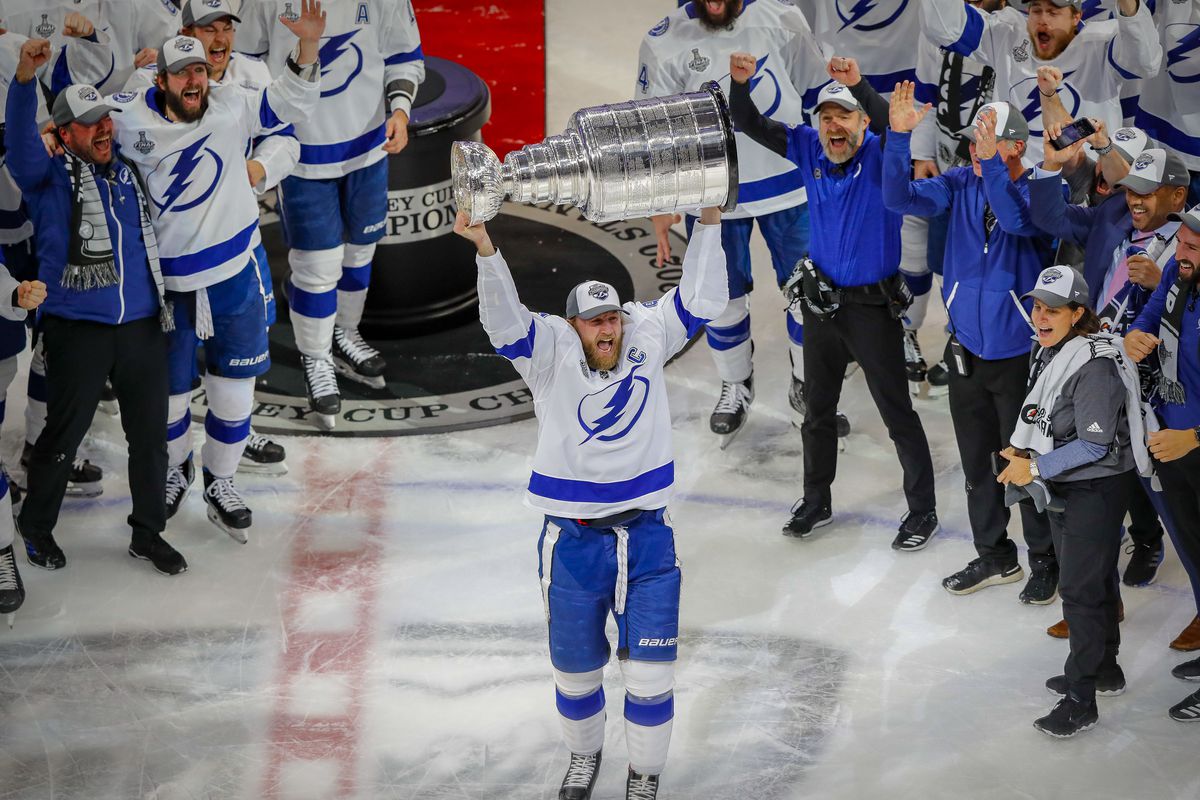 The 2021 NHL Playoffs started off with three competitive, thrilling overtime games on NBC. It started what will be the last year of NBC Sports producing the NHL playoffs for the foreseeable future.

Here were the games and the play-by-play and studio assignments (all games broadcast on NBC):

Note: Game was joined in-progress due to NYI-PIT going into overtime.

These are my ten observations on NBC’s coverage of the first weekend of playoff hockey:

1 – At the end of regulation of the Wild-Golden Knights game, NBC Sports studio host Liam McHugh had the correct humorous quote for hardcore NHL fans about to watch their third overtime game of the weekend. He said, “Let’s face it, you didn’t have any other plans anyway.” It was the first time in NHL history the first three games of the playoffs all went into overtime.

2 – The overtime predictions by the studio were spot on during Sunday’s matchups. For the Islanders-Penguins game, analyst Patrick Sharp chose New York’s Kyle Palmieri to score the winning goal. Palmieri, who had two goals for the Islanders since the trade deadline, scored his second goal of the contest in overtime to lift New York to a 4-3 victory and a 1-0 series lead. In the Wild-Golden Knights contest, analyst Dominic Moore correctly predicted Minnesota’s Joel Erikkson Ek to score the game winner in overtime. Erikkson Ek tallied the only goal of the game in overtime to give the Wild a 1-0 victory.

3 – During an intermission break in the Wild-Golden Knights game, McHugh said the Islanders “stole” game one in Pittsburgh. While New York is still the underdog in the series, the game was somewhat even. Pittsburgh outshot the Islanders 42-40, and both teams created ample chances throughout the contest. Both teams had opportunities and generally speaking, it was an evenly-played hockey game. Saying New York “stole” the game was a bit excessive.

4 – Initially, on the surface, NBC’s new score bug for hockey games gets an A+ in my book. But NBC tried try to fit extra statistics like power-play time and shots-on-goal in too small of a space where it covered a part of the team logo. When play went 4-on-4, it obscured parts of both teams’ logos. NBC showed the “hits” stats. I give NBC credit for putting in a fresh score bug, but it gets a B+ after seeing all the extra stats being put in too small of a space.

5 – Sometimes, the conversation flow between Brendan Burke, Keith Jones, and their “Inside the Glass” partners (Brian Boucher for BOS-WSH game, A.J. Mleczko for NYI-PIT game) seemed a bit wonky. Nonetheless, Burke did a superb job of bringing in relevant stats and Jones brought in solid analysis to support those statistics. Boucher focused a lot on the goaltenders during the Bruins-Capitals game. Once both Boucher and Mleczko both have a chance to get more reps with Keith Jones, the conversation flow should run more smoothly.

6 – Before the Islanders-Penguins game, the cameras were on Burke and Jones, which was not the case on Saturday night before the Bruins-Capitals game. Thus, I had no idea whether Burke and Jones were at the arena or broadcasting remotely. (I learned later that they indeed called the game from the arena.) Transparency is best. Viewers should not have to guess where the broadcasters are situated. Fan expectations vary, depending upon the announcers’ vantage points.  For the MIN-VGK game, John Forslund and Joe Micheletti were shown on camera inside T-Mobile Arena.

7 – Watching Keith Jones, who’s been a mainstay of NBC Sports’ studio coverage serve as a game analyst was a change. (Jones is the main color commentator for the Philadelphia Flyers). He did a good job referencing game stats, such as the Bruins’ faceoff advantage against the Capitals during that game. He didn’t say anything that was too flashy or terribly insightful. Then again, his cautious analysis kept him from making mistakes.

8 – The chemistry between John Forslund, Joe Micheletti, and Pierre McGuire during the Minnesota-Vegas game was great. All three of them were very conversational with each other and the tradeoff of color commentary between Micheletti and McGuire seemed natural.

9 – Brendan Burke did a good job of letting the Capitals fans be heard for about ten seconds after Washington’s Nic Dowd scored the game winner in their Game 1 contest against the Bruins. He also let the broadcast breathe after Kyle Palmieri scored the game winner in the Islanders-Penguins game. The pause did not seem as long because the goal was scored for the away team. There was less cheering from the Pittsburgh faithful than the jubilant Washington crowd at the end of their respective games this weekend.

10 – NBC had no official pre-game coverage before the Bruins-Capitals contest due to the Preakness Stakes where Rombauer pulled off the upset victory. Legendary hockey announcer Doc Emrick, who retired after the 2020 Stanley Cup Final, narrated an intro to the playoffs. He talked about all the “hands” that take part in the spectacle of playoff hockey. The best way to describe the narration is that it was written by the gifted Doc Emrick. A generation of hockey fans grew up hearing Emrick’s unique play-by-play style during the Stanley Cup Finals. It appears that Kenny Albert will have the big shoes to fill covering the Finals this year. Albert has already been appointed the lead voice beginning next season when Turner has the rights.