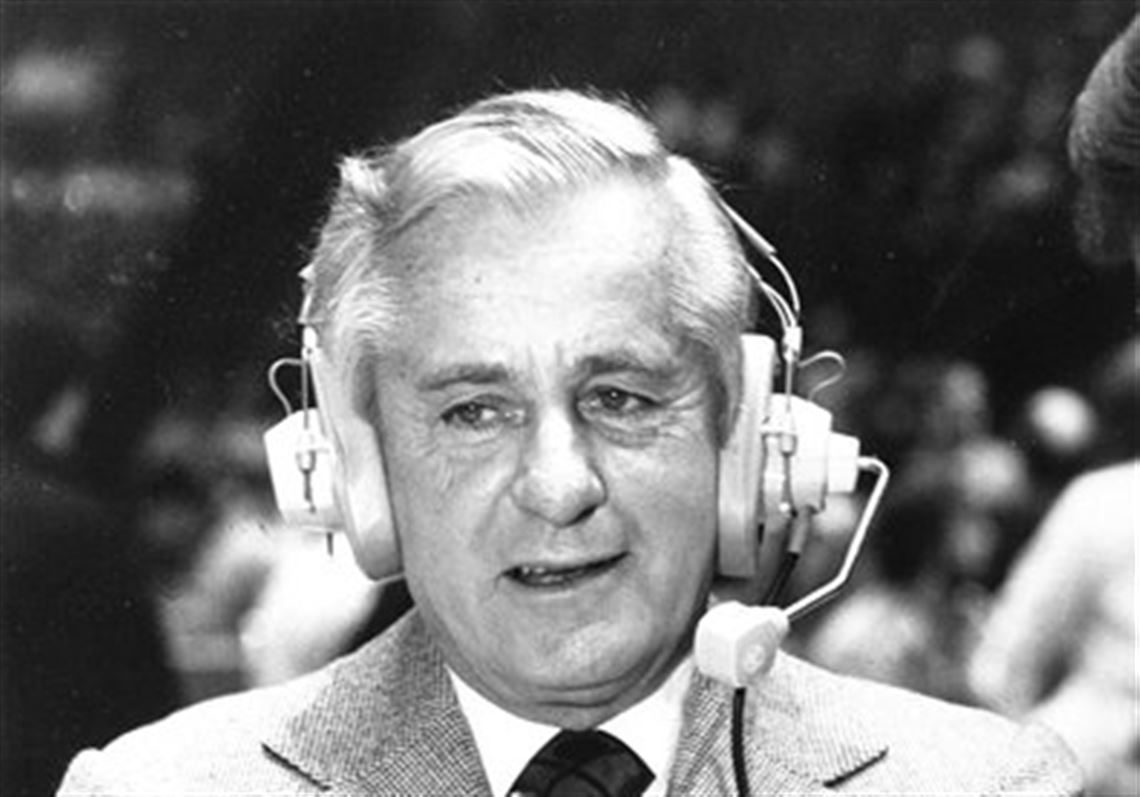 GOWDY’S LEGACY: A  BIG HEART, A  COMMAND OF THE MICROPHONE, A NATURAL WARMTH AND A WILLINGNESS TO HELP OTHERS

Who  are the only broadcasters to voice an NBA Final, NCAA Final, a World Series and a Super Bowl? The answer: only one, Curt Gowdy. For fun, add 12 granddaddies as Curt referenced Rose Bowls. And if not enough, Curt did hockey too during ABC’s 1968 and ’76 Olympic coverage.

Name those who’ve received the broadcast award from the Pro Football, Basketball and Baseball Halls of Fame. If you answered Curt Gowdy and Dick Enberg you’re spot on. They’re the only two.

Bottom line. From the mid ‘60s to the late ‘70s, there was no bigger network play-by-play man in America than the avuncular Curt, born 100 years ago this Wednesday, July 31st.

He was so popular and beloved that ABC Sports president Roone Arledge wanted him as the play-by-play announcer for Monday Night Football when the network launched its prime-time NFL coverage in 1970. But Gowdy had an ironclad contract with NBC and wouldn’t budge.

Curt got into broadcasting by accident. He suffered an injury while playing basketball for the University of Wyoming and was forced to undergo spinal surgery. While recovering, a local radio station in Cheyenne asked him to do a football broadcast. He told the station manager that he had never done play-by-by-play. The manager said, “Curt, it’s either you or my wife and she certainly hasn’t done any.” A star was born.

Later recruited to Oklahoma, he did OU football, coached by the nationally prominent Bud Wilkinson and OSU basketball under Olympic coach Hank Iba.

It was in the Sooner State where he caught the attention of CBS Sports Director Red Barber who used Gowdy on a network radio football broadcast. And it was in Oklahoma City where he made a name for himself doing baseball while handling play-by-play for the Indians of the Texas League.

When the Yankees had an opening for a broadcaster in 1949, Jack Slocum, working on behalf of sponsor Wheaties recommended Gowdy to lead voice Mel Allen. Slocum liked his relaxed style, so did Mel. General Manager George Weiss and Broadcast Director Trevor Adams concurred. Although he had seen only one Major League game in his entire life, Gowdy got the biggest break of his career. On opening day in 1949, there he was, sitting near Allen, calling Yankee games.

“I was scared to death, nervous and tense. Mel taught me a lot, from weaving in commercials to paying attention to detail. He liked to go back and forth on the air which I had never done,” Gowdy reminisced.

With Mel locked in at Yankee Stadium, Curt knew that to grown he would have to find a number one gig with another team. In 1951, he moved up to Boston with his wife Jerre and their family to become the lead voice of the Red Sox. There, he developed a friendship with the great Ted Williams and called the Hall of Famer’s final at bat, a home run in 1960.

By the 1950s, NBC started using him on NBA games with Lindsey Nelson and on the 1958 World Series with Mel Allen.

In 1962, Gowdy began voicing AFL games for ABC and transitioned with the package when it went to NBC in 1965.  When the leagues merged in 1970 and NBC had the AFC package, Curt continued as the network’s lead football voice through 1979. In all, he did 7 Super Bowls, including the first which was carried by both CBS and NBC.

His recollection of the first, formally the AFL-NFL Championship Game, was that it was more a battle between the two networks than the Packers and Chiefs. “Vince Lombardi said it himself in the days leading to the game. It was true. Every five minutes during the game, executives of both networks were calling New York for the latest on the ratings. Even though CBS had the dominant NFL, we at NBC did fairly well (22.6 for CBS and an 18.5 for NBC),” he told an interviewer years later .

The sunniest moment of Gowdy’s star studded career was Super Bowl III, the Namath guarantee game, the stunning upset by the Jets over the mighty Baltimore Colts.

Curt insisted that although he had been the unofficial Voice of the AFL for seven seasons, he had no rooting interest in the game. Yet there had to be joy in his voice, ”Ladies and gentlemen, we’re sitting in on history. No one thought it would be close and the Jets almost shut out the mighty Colts.” Still, Curt mollified Colts’ fans after the crushing loss, “(Jets coach) Weeb Ewbank coached (Colts coach) Shula and says Don will be a great coach.” Indeed.

Earlier that 1968-69 season,  Gowdy was behind the mic for the famous Heidi Game when a tight Jets-Oakland telecast was cut off in the final couple minutes for the popular children’s film. When Gowdy came down to the truck after the game, he was told that half the country didn’t see the finish. Curt was asked to go back to the booth to recreate the last minute over taped film. From his recreated commentary it’s obvious that he knew the result, “The Jets will never lose a more heartbreaking game,” Gowdy said in his recreation of the final minute. In New York, the end of the game was shown on WNBC-TV at 11:20pm. By then, New York sports fans were heartbroken.

In 1966, when the Peacock Network began its first completely national MLB Game of the Week , Gowdy was hired fulltime. He left the Red Sox after 15 seasons. 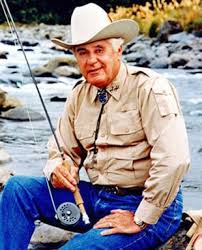 An outdoorsman who loved to fish and hunt. the Wyoming Cowboy hosted a popular network series called the American Sportsman, a show on which he would engage celebrity guests in recreational activity on the water and in the woods. For years, it was on ABC. He did so while serving as the lead play-by-player on NBC, which had rights to just about everything that mattered in those years.

In fact, the two shows would sometimes run at the same time. So Curt would be heard calling a game for NBC while the recorded  American Sportsman was on ABC simultaneously.

The comforting and husky voiced play-by-player called Bill Walton’s NCAA titles under John Wooden and 9 Final Fours in all. Curt told me many years later, “I always thought that basketball was my best sport.”

Gowdy was also a good businessman. In 1957, his back went out in spring training. He was laid up for months. The gentlemanly Sox owner, Tom Yawkey, assured him that his job was safe. But concerned about his future, Gowdy invested in radio stations and built significant wealth.

Sports Illustrated described Gowdy’s rhythm as one of  “crisp dryness.” In the mid 70s, the magazine estimated that he earned $350,000 a year ($1.67 million today) and it noted that when he was told of the presence of California Governor Ronald Reagan at a game, he quipped, “Some sportscasters (which Reagan was) get to be governors, but I couldn’t be elected dogcatcher.”

Gowdy’s legacy was his passion, big heart, command of the microphone and natural warmth. Most importantly, he always had a willingness to help others.

His voice was inviting and his sound was never rushed. Curt was particularly at ease when telling stories. By his own description, he would say that when he called a game, “I tried to pretend that I was sitting in the stands with a buddy watching the game, poking him in the ribs when something exciting happens.”

No doubt Curt Gowdy is legendary. Just a few nitpicks in the article: Hank Iba coached Oklahoma A&M before the college changed its name to Oklahoma State. NBC’s Heidi broadcast was a made-for-TV movie, not the original film from 1937 that starred Shirley Temple. Curt was so good that perhaps people remember his slip-ups. I recall a baseball game Curt announced in which the pitcher got a base hit which prompted Curt to say “that’s one of rarities in all sports, a good hitting pitcher.” I wonder in what other sports other than baseball where you would find a good… Read more »