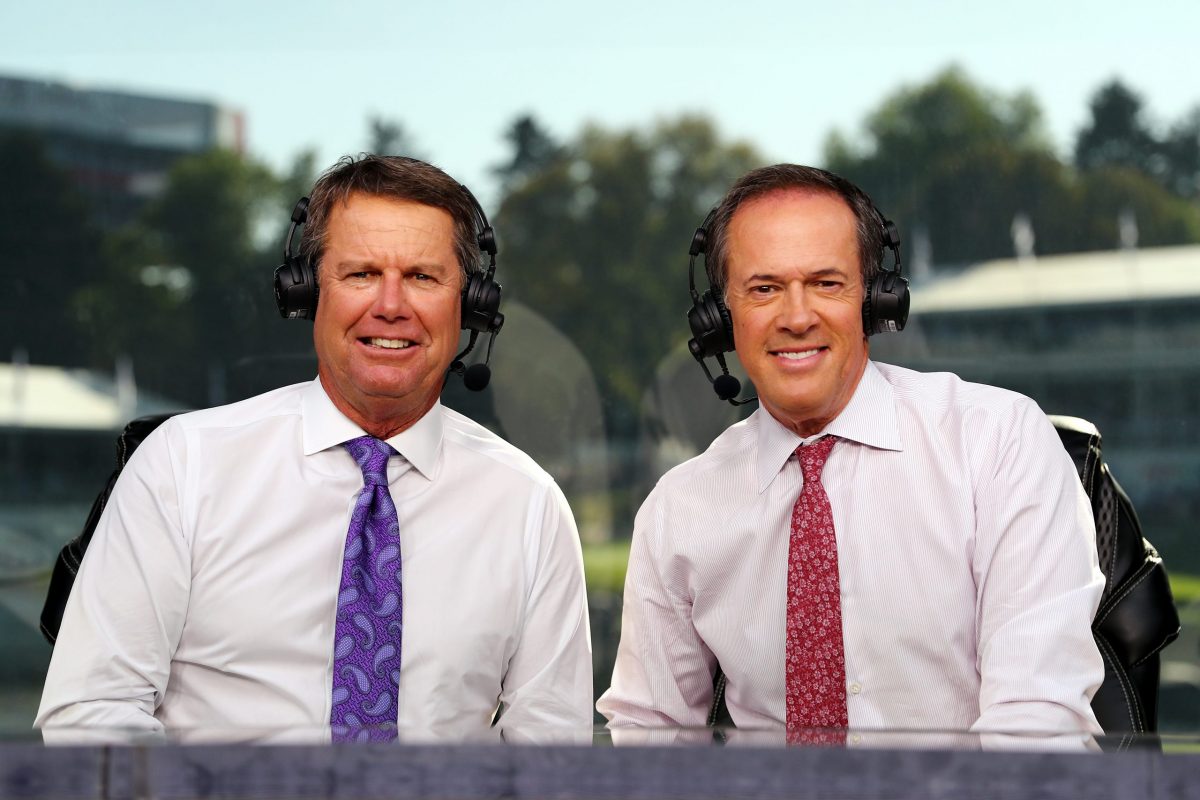 Dan Hicks and partner Paul Azinger (l) at the WGC-Mexico Championship, sitting in the 18th hole tower this past February.

In June, golf was the first sport to return after the pandemic hit in late winter. Week in and week out since, televised tournaments have been dominated by The Golf Channel on Thursdays and Fridays and CBS on weekends with lead anchor Jim Nantz and company. The exception was the one major played to date, the PGA Championship three weeks ago. ESPN ably feted us with the opening two rounds before handing it off to CBS.

Not long after golf returned, there was some legitimate breaking broadcast news.  Fox made a bold decision, largely dictated by the financials of the package, to resell its rights to the United States Golf Association Championships, (USGA) to NBC.

So NBC which previously held the rights to USGA events, is back in the fold. The network, mainstream NBC and it its cable tentacle, Golf Channel, will now have two of the men’s majors in its programming portfolio. With the schedule turned upside down this year, it  means that next month, NBC will broadcast the US Open golf at historic Winged Foot Golf Club in Mamaroneck, NY from September 17-20th. Earlier this year, The Open Championship, (often referred to as The British Open), was cancelled until 2021, so NBC will have to wait to telecast both events in the same calendar year. CBS of course has had the Masters since 1956 and for many years has run the PGA Championship too.

The long-time anchor in the booth for NBC Golf and for a variety of other sports too, Dan Hicks, has been dependable, a mainstay at the network since 1992. He’s Mr. Reliable at NBC and there’s no better compliment that I could pay him other than to say he’s consistent, steadfast and trustworthy .

Hicks (with wife Hannah Storm, left) has had his share of memorable calls. Who can forget the “Expect anything different” call that Hicks had when Tiger Woods went on to win the US Open in June 2008 on one leg. Perhaps his most famous exclamation was a month later at the Beijing Olympics when in a swim relay that was so close that Dan captioned it, “Unbelievable at the end! He’s done it! The U.S. has done it!” That call was the precursor to Michael Phelps winning eight gold medals. True, it was Phelps’ teammate Jason Lezak who swam the anchor leg but that call was ultimately one for history and Hicks nailed it.

When Hicks returned to the East Coast after anchoring last week’s coverage of the US Men’s Amateur Golf Championship at Bandon Dunes in Oregon, we had a chance to catch up. He’s preparing for a busy schedule with the return of PGA Tour Golf to NBC’s airwaves this week for the second leg of the FedEx Cup playoffs at the BMW Championship in Chicago. It will be followed by the season ending Tour Championship in Atlanta. Then in September, he’ll be back at it with the US Open.

What was that experience like Last week at the US Amateur in Oregon?

It was incredible. It had all the elements. We’re on the West Coast, primetime on the East Coast. Great story line with Tyler Strafaci winning. Everything really came together which is why the ratings were so good, (472,000 viewers per minute on Golf Channel). It had a little bit of everything. You had the fog layer, an incident with a caddie concerning a rules violation and an outstanding venue at Bandon Dunes.

What’s it been like for you these past five months?

For a span of 3 ½ months I didn’t travel, which is the longest I can remember since I got out of college and started working. Although it’s great to be back, it’s different. A different vibe without spectators. Golf has been one of those sports that’s really led the way back for all and I must commend PGA tour commissioner Jay Monahan on the great job that he’s done. You basically prayed and crossed your fingers when they returned initially at the Charles Schwab that they’d get through this thing. But here we are, the final two events of the season coming up followed by the US Open. Right there at the finish line.

Have you kept a close eye on how CBS and The Golf Channel have gone about their presentations since the return in June? 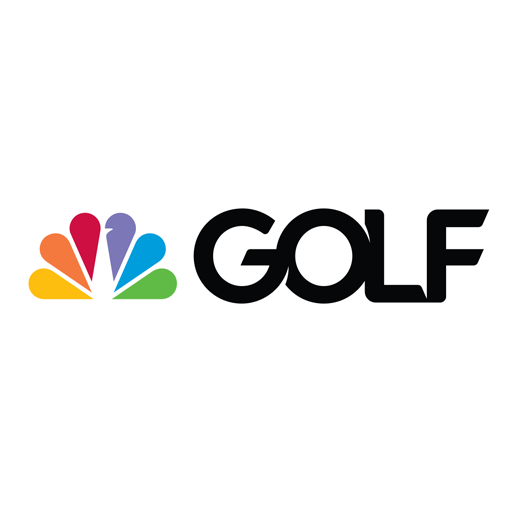 Absolutely. CBS did a great job in being the first one out there charting the waters. I know Sean McManus (Chairman of CBS Sports). We’re both members at Winged Foot so I’ve had a chance to talk to him about it. Just watching the telecasts, seeing how they work and how they feel is really the best way to digest it. I’m sure some of our production people have had conversations with theirs just to understand the logistics.  We’ve made a commitment to get everybody together on-site at each of the events we’re covering, starting in Chicago this week at The BMW.

Even if you’re in a mask, you can still interview players on a practice tee and get information that otherwise you’d have no chance of getting. Any golf analyst will tell you it’s near impossible to analyze when you can’t see the grass, the greens, and the conditions. It’s the same for us when we’re personalizing these players.  There’s no substitution for being on site and feeling the whole vibe of an event.

How surprised were you that NBC picked up the US Open from FOX?

Oh man. It’s unbelievable. I still can’t believe it happened. It’s dreamlike stuff for us. Very unfortunate for Fox. Mark Loomis, the FOX executive producer of golf, is a good friend of mine. Lifelong family member. I feel for him and feel for his crew. I’ve been on the other side of it. When you lose a property you absolutely have a love affair with, it gets in your DNA. It happened with us when we lost the US Open, a property we held for twenty years.  It was gut wrenching. I’ll never forget where I was. Then we acquired The Open Championship (the British) which has just been a dream. So here I am thinking that’s great, and here comes the US Open back to the club where I belong (Winged Foot). It’ll be great because I know the members and the golf course so intimately.

Thoughts on all the attention that Tiger Woods still commands on a golf telecast. Do you ever see that waning?

You know what, not until he retires. He has that kind of pull, that kind of allure and that kind of draw. People are just so obsessed with him. Nobody has comes close to transcending a sport like him. I had the privilege to cover Michael Phelps in swimming and it was the same kind of thing. These guys don’t come around very often. I’ll tell you right now, we’ll never see anyone win eight swimming gold medals at a single Olympics.

Rules violations in golf seem to prop up occasionally. What’s your responsibility as a lead in the tower?

Every case is different. There’s some gray area but sometimes it’s just so apparent. Normally, I’m very reserved and I let the officials make the call. In the recent US Am, it was obvious. With the Jon Rahm thing you must let it play out. Intent has now been placed into a rule which has caused the rules to be more ambiguous.

The Olympics have been a huge part of your broadcast life for many years. You were gearing up for Tokyo this summer and that came to a screeching halt. How did that affect you?

It’s a huge piece of the television sports landscape because there’s no bigger spectacle than the Olympics. You kind of turn off your intense Olympic research. But we’ll begin the same gear up and intensify it in about six months out from next year. I don’t think there will be much change in the athletes we cover though. Some will benefit and some won’t and that’ll all play out next summer.

What else will you be covering this fall?

I’ll be doing the French Open tennis with John McEnroe and Mary Carillo, which I started to do in 2019.  I had a blast at it. We’ll most likely do that remotely because of the travel restrictions to Europe.  Some additional golf in October with a women’s major, The KPMG.

You mentioned Mary Carillo. She’s unique in what she does. Your thoughts as she has gone beyond just the tennis broadcast?

Mary is incredibly talented. I’ve worked with her in past Olympics but to do a tennis event with her is incredible. She does her homework and has a gift to translate what we’re seeing in a very conversational way. She’s got the whole package.

Your first career stop was in Atlanta at CNN. Lots of well-known sportscasters came through there.

Bill MacPhail, who was previously president at CBS Sports became the president of CNN Sports. It was a great time to get into the business. He hired me and Hannah (wife, Hannah Storm). Dan Patrick had just left. Keith Olbermann, Vince Cellini, Gary Miller were all there. I think Bill had a great eye for talent. We were always the underdog compared to ESPN, not near their budget or resources. Great way to come up in the business and learn the craft and I have many fond memories of Atlanta and CNN which is where I met my wife.

Does Hannah play as much golf as you?

No, she doesn’t. I’m openly trying to recruit her to play more. Seems like more and more women are taking up the sport. Her personality is pretty gung-ho and you know certain sports just don’t fit your personality, (laughs), but I’m holding out that maybe someday she’ll get the bug!