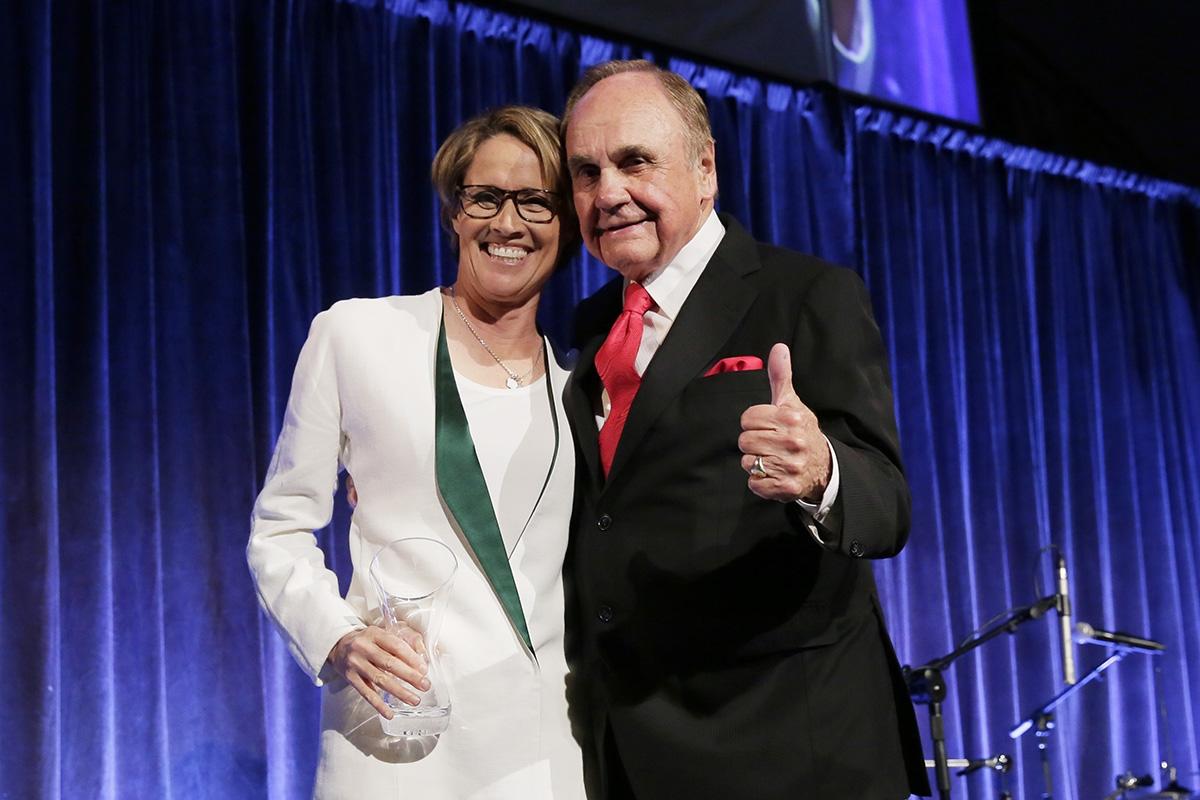 NBC's Mary Carillo with the late and beloved Dick Enberg

In the world of sports, the word pioneer is thrown out to a point where it is often overused.  It’s no different in sports broadcasting. The pages of this publication have told the tales of many of our industry’s best and brightest and yes many have been true trend setters.  For females, the list is short as to who broke the hallowed ground in a field dominated by their male counterparts.

Earlier this year, Phyllis George of CBS Sports died. How many Sundays can we remember when it was Brent, Irv, Phyllis and Jimmy the Greek? One of the most versatile sports broadcasters of our time, Lesley Visser was a mainstay for years across a variety of major sporting events and media platforms. Robin Roberts of course started her climb to fame at ESPN as a three-time Emmy winner before landing at ABC’s Good Morning America in 2005.

Another icon who clearly has made her way onto this list is NBC’s Mary Carillo. It’s hard to believe that Carillo, 63, has now been calling major championship tennis for 40 years.  She’s travelled the world as one of the games top notch analyst and has broadened her horizons for decades. She’s now as a fixture on NBC’s Olympic coverage and the critically acclaimed HBO series, Real Sports with Bryant Gumbel.

A former tennis standout herself, she’s received some of broadcasting’s most prestigious honors. Consider that Carillo has received two Peabody awards for Dare to Compete: The Struggle of Women in Sport and for her outstanding work on the Billie Jean King documentary, Portrait of a Pioneer. In 2010. Mary became the first woman to earn the prestigious Dick Schaap Award for Outstanding Journalism. The honors continued in 2018 when she was inducted into the Sports Broadcasting Hall of Fame. It’s not a stretch to say that Mary has turned into a giant in the industry.

I had a chance to catch up with Mary when she called the Italian Open for The Tennis Channel and was already preparing for the French Open which runs this week on NBC. Due to Covid travel restrictions, she’ll broadcast remotely from NBC’s studios in Stamford, CT alongside lead anchor Dan Hicks and longtime co-analyst John McEnroe.

Many times I’m asked a familiar refrain by readers of Sports Broadcast Journal about what a broadcaster is really like. Was the broadcaster genuine, does it match his or her on-air persona or is it a mask for a different personality altogether. Mary Carillo is exactly what you thought she’d be. Authentic.

After reading the interview, you’ll agree.

The French Open on NBC (schedule below):

Way back in the day, did you ever think that after your professional tennis career you’d be in sports broadcasting this long?

First of all, I had no idea this could have been a career. When I first started, there were very few women who broadcast tennis and I was only assigned women’s tennis because the feeling was what could a women possibly know about men’s tennis? (laughs).

Toward the end of my playing career my knees were riding on rims. When I played, I wrote some articles, got interviewed a lot and lost well. I was pulled in by the circuit’s lead sponsor Virginia Slims because it knew I would say something funny.

I loved watching the press room as the media created their stories. I come from a family of storytellers. My father is an artist, my sister is an actress, my brother is a novelist, my son is an actor.  We all had something to say and could tell a good story. It was a good family dinner table and it was my mother who led us all!

Tell me more about the very beginnings of your transition to broadcasting?

After I lost my final match at Wimbledon in about 14 minutes in 1980, a guy calls me. He had heard me do some spontaneous, pick-up commentary of a year-end championship between Evonne Goolagong and Tracy Austin about a year earlier. He says that USA Network is going to start televising a couple of women’s tennis tournaments and wondered whether was I interested. I laugh about it now but talk about luck.

I always get the sense that you’re pretty matter-of-factly. Do you get that a lot?

Yes. I wasn’t a great tennis player. Nowadays, the people who make it up to the booth are famous, they’ve won Wimbledon a bunch of times. It occurred to me early on that I was hired to share my opinion and my world view of the sport. You can be criticized for being so critical. Johnny Miller was my guy. When he spoke people listened. I’m a total nerd working. I’m usually up early preparing.

Are we in a good place with sports considering what 2020 has been like around the world?

Being from New York and knowing how hard hit the city was hit early on in the pandemic, I couldn’t believe that the United States Tennis Association, (USTA) was even thinking about holding the US Open. Like what are you clowns thinking? Then months went by and I started to see that other sports come back like golf and it was safe. I hadn’t seen my parents, (90 and 94) since February and they haven’t even met their great granddaughter. Now I’m thinking I got to get to NY and work the U.S. Open. I was supposed to work for The Tennis Channel in LA but I was given the opportunity to work the tournament on-site for the world feed. I couldn’t imagine doing that two months earlier.  Being there was such a privilege and of course I was able to see my parents which was the main driver.

The quality of the tennis seemed to be excellent.

The tennis, especially on the women’s side was remarkable. The whole experience in Arthur Ashe Stadium was something raw and stark. I had no appetite for the exhibition tennis in the summer but the experience felt very real and I would absolutely disagree with anyone who says it should have an asterisk.

Is tennis in healthy hands, particularly in America?

There are some good young players coming along such as (American) Taylor Fritz. But when I think of who’s going to take charge of the game minus the big 3, (Federer, Nadal and Djokovic), I don’t think of Americans immediately.

What’s it like to work along side John McEnroe?

It’s a pretty interesting dynamic. He’ll be watching the player who’s winning and I’m watching the players who’s losing. The reason is because he won so much and I fully comprehend why that player is losing! John can show up five minutes before air, still in his practice outfit and can be just as instinctive as ever. He doesn’t even know some guy but he’ll be as ready as ever to give his analysis. On the flip side I’ve been up all night studying every angle. Within 3 games, John will know what the guy can do.

You’ve known McEnroe since your childhood?

Hand to God, true story,. We’re on court #4 of the Douglaston Club in Queens. Now bear in mind I’m two years older than John. For a while, I could live on the court with John. I could give him a good game.  Things come annoyingly easy to him.

We were playing a match and the tectonic plates shifted one day without my knowledge! I couldn’t give this guy a game. And here we are I’m 11 and he’s 9. So we finish playing and I looked at him and I told him, you’re going to be the best player in the world one day. McEnroe says, “Oh shut up, you don’t know what you’re talking about.”

I consider that to be my first commentary and my first review, (laughs).  We were both lucky to grow up near Forest Hills, (former site of the US Open), and we watched incredible tennis each year. For gosh sakes, John was a ball boy for Bjorn Borg! But when I told John I thought he was going to be the best player in the world, I actually saw the best players each September. I didn’t just pull that out of nowhere.

Everyone has their perception of John, was he a pain the butt when he was younger?

No, not when he was younger. He didn’t get his Irish temper until he was 18. But he’s come full circle now. He’s a very calm guy.

Your thoughts on the Djokovic ejection at the US Open?

He was already in a bad mood as the first set progressed. He knew right away that he screwed up.

You had an opportunity to spend some time with Oscar Pistorius, the South African who ran in the Olympics on blades. You do this feel-good profile and then not long afterward you’re back in South Africa covering the beginnings of his trial for the murder of his girlfriend. Take us back to that experience.

That was a remarkable deal.  It was nothing but a feel good story. He was part of a relay team for South Africa and really was considered a national hero. Not that long after the games, I flew to South Africa to cover his trial on murder and you get the bends just thinking about it. It was surreal.

Real Sports on HBO. Has that show brought out a different part of you?

We don’t need a soundbite to make the show successful. We need a couple days with someone to make that show really work.  Our executive producer, Joe Perskie, is a marvel and really has great insight as to why a story will or won’t fly.  I find that moment in a segment when someone’s trying to hold back tears much more poignant than the person who is actually crying. I love seeing the struggle but the honesty is so real.  My goal is to be curious when I’m involved with sports other than tennis. I don’t even try to pretend  I even know about how or even why what they do.

You’ve even called luge at The Olympics.

I crush luge (Laughs)!  I was so glad when I started getting Olympic gigs. I was able to go to some of the neatest places.  It’s a great way to see the planet..

Talk about the social justice movement going on in professional sports.

Are you a social media type?

Not at all. To me it’s just a big time suck of your time. I’m a grandmother for God sakes. But there’s some viciousness in tennis, particularly on the gambling side of things. I’ve seen women tennis players walk off the court in tears as a match just ended and they’re checking their Twitter feed and they are being called all sorts of nasty names. You can’t give so much power to strangers.