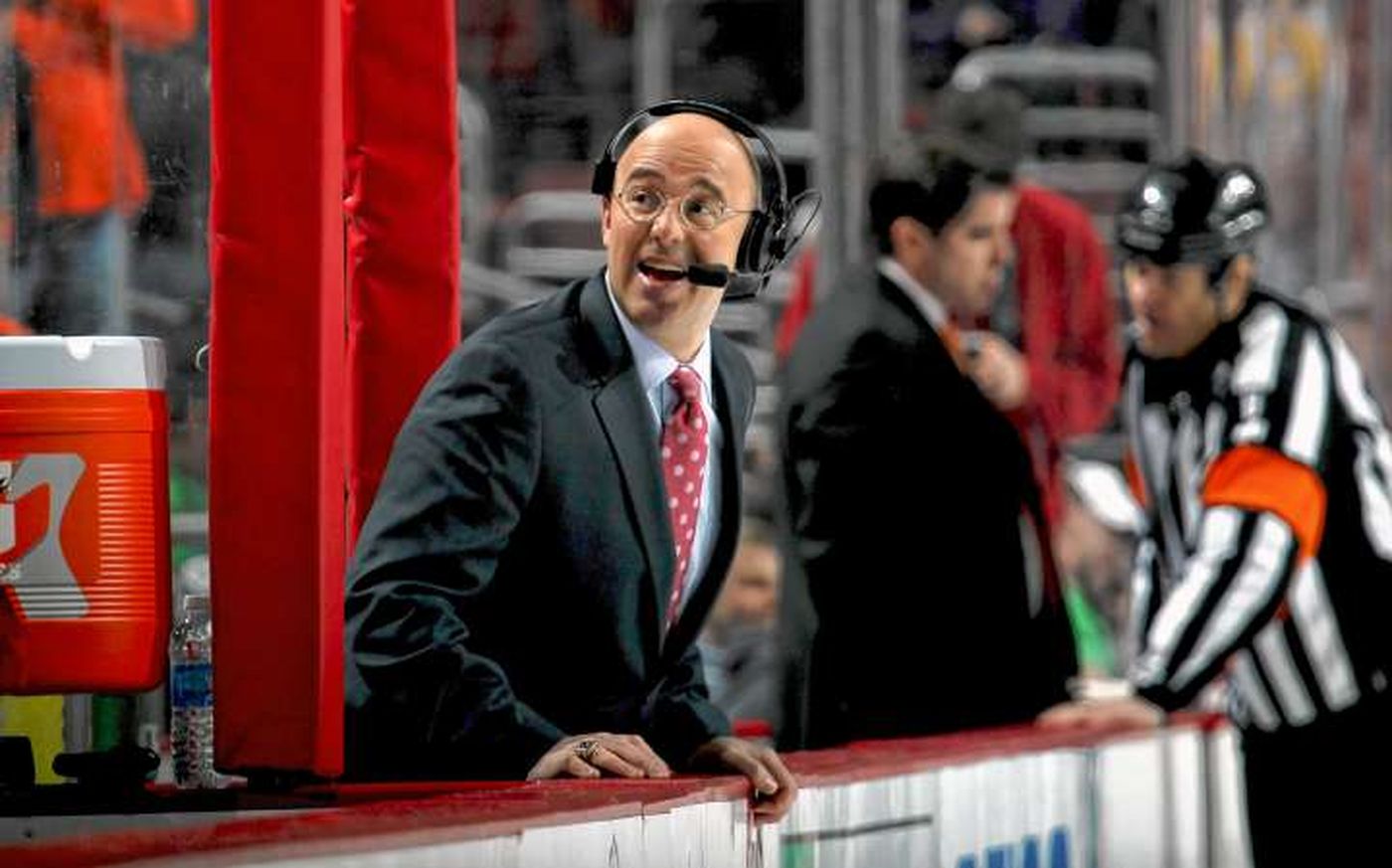 Fearless and wearing no helmet, NBC's McGuire has had encounters with flying pucks and split sticks

Pierre McGuire, NBC’s Inside the Glass reporter for 14 seasons, might consider a Lloyd’s of London insurance policy. Game after game during the Stanley Cup, McGuire reports from his risky station, the arena’s nerve-center, right down at ice level. Basketball announcers might prefer being downstairs. In hockey, doing so takes braveness and courage, especially if you’re McGuire and don’t wear a helmet.

At Pierre’s vantage point, pucks dart across the air at dangerous speeds; turning inanimate discs into unpredictable projectiles. Just recently, one of those flying pucks came within a hair of knocking him out cold. Reminded of the incident, the hardened vet just shrugged it off.

McGuire is wired with unrestrained energy, especially during the playoff chase. Night after night, in buildings where 19,000 impassioned hockey fans empty their lungs, Pierre transforms the energy on the ice to the viewers at home; the emotion fans might see on their screens and the vigor they can’t feel.

Never fully out of harm’s way, Pierre is a victim waiting to happen. He’s had some nutty things occur through the years.

Several years ago for instance, at a playoff game in Buffalo, McGuire got hit over the head with a stick. Longtime Sabres trainer Rick Simonick told him, “You’re bleeding badly.” McGuire spewed, “No kidding, it’s running through my eyes.”

For Pierre, it’s a hazard of the trade. Just another night in the office. Where’s the next game, he thinks.

When I asked him if he’s recognized as he hops from one city to the next covering the Stanley Cup, the likable and bald-headed McGuire says, “My hairline gives me away. I can’t travel incognito.”

Pierre and I talked last Friday.

First, Game # 3 of the St. Louis-San Jose series, Erik Karlsson’s goal in overtime should have been nullified because of a hand pass by Timo Meyer. What are your thoughts? Four officials on the ice and none of them saw it.

It wasn’t handled well. A major mistake was made. The play isn’t reviewable and the league will have to look into why it’s not.  All overtime goals should be reviewed. It would have nullified Karlsson’s goal.

You’ve done it all. You played. You coached in college and briefly in the NHL. You’ve scouted. You were an assistant general manager. You’ve done radio. You’ve been on network TV. What do you miss most?

I love being around the NHL. But I miss coaching, being with players every day. I admire them.

You broke into the NHL through the legendary Scotty Bowman, 85, whose daughter Alicia went to St. Lawrence where you coached.

Scotty is a great mentor and an amazing friend. I learn something from him every time we speak.

How did the relationship come about?

At the time I was coaching St. Lawrence, Scotty was doing Hockey Night in Canada. It was between the years he coached in Buffalo and Pittsburgh. One day he showed up at one of our practices and came up to me afterward. He says, ‘I’m Scotty Bowman.’ I said, yes, I know sir. He went on to tell me that he liked the way I ran practice. We started talking regularly. One June evening in 1990, I came home and there was a message form him. Scotty said he was being appointed to run hockey operations in Pittsburgh. He asked me to join him.

So what did you do?

A day after the call, I joined him in Vancouver where the draft was being held. And that’s where we picked Jaromir Jagr with the fifth pick.

What is it about Scotty Bowman that makes him special?

He’s the best coach ever in the NHL, by far. Scotty coached in five decades. Think of his legacy, his coaching tree, guys who either played or worked for him; Mike Keenan, Al Arbour, Red Berenson, Mike Babcock, Jacques Lemaire, Larry Robinson and many others.

You were coaching a St. Louis minor league team in Baton Rouge, Louisiana when the Montreal Canadiens asked you to do radio.

Ted Blackman, a legendary Canadian media personality and executive reached out to me and said he liked the way I handled interviews when I was coaching. He told me a change was being planned for the Canadiens broadcasts. Ted said, “Pierre, I can’t pay you what you’re making, but I guarantee you’ll be on national television in two years.” So I took the job.

Did you have any emotional connections to the Canadiens?

I grew up in Montreal and listened to Danny Gallivan’s play-by-play and partner Dick Irvin. The team and the broadcasts meant a lot to me.

Were you on network TV in two years?

Blackman was spot-on. I loved doing radio but TSN called and there I was, hired to do hockey on Canadian national television a couple seasons later.

By the way, working Canadiens broadcasts was special. The club doesn’t get in your way. You’re given quite a bit of freedom. If you have to be critical, do so.

During the 2004 Stanley Cup, ESPN’s rights were winding down and I had a call from Sam Flood who’s NBC’s production head. He asked me whether I can serve as a reporter from a potentially newly created vantage point on the ice. I told him absolutely. But I also said that I was doubtful the league would allow a reporter there. Then Flood said something to the effect that he was confident that his NBC bosses, Dick Ebersol and Ken Schanzer, would get the league to allow it.

Weeks went by and I didn’t hear anything. One day the phone rings. It’s Flood telling me that NBC got the rights and that he wants me on the broadcast team as discussed. Over time, the “Inside the Glass” role has taken on a life of its own. The next season, the NHL was shut down by a work stoppage. But by 2006, the games started again and I was with NBC. My contract with TSN allowed me to work for NBC.

Who do you pattern yourself after?

No one. It has never been done. Inside the Glass is an unprecedented role.

Flood is a hockey guy. Isn’t he?

Sam knows the sport well and captained Williams’ College team. So he’s passionate about the game. To make the telecasts work effectively from ‘Inside the Glass,’ it’s critical to have a strong tape operation and replay packages from ice level. NBC does.

How much did you travel this playoff season?

I worked 11 games in the first round and 14 in the second. In the second round, I was in a different time-zone every time we moved from one game to the next. I travel commercially and had no close calls. My airline of preference is Delta.

Doc Emrick. What makes him so good?

Energy, annunciation, thorough preparation, understanding of the game and he has the perfect phrase for the right moment. In overtime in the Winter Classic in Buffalo, “Sidney Crosby, with the game on his stick!” You can’t caption it any better.

Scotty Bowman was so successful for so long because he adapted decade by decade. Same for Mike Emrick. He’s always current.

Who is the young, up and coming broadcaster nationally in the NHL?

Well, to begin with, our John Forslund and Kenny Albert are excellent. And I think Brendan Burke who did some games for us earlier in the playoffs, the Islanders’ announcer, has a bright future ahead of him.

What do you do in the off-season?

I try to be a good husband and spend time with my kids. My daughter Justine is a rower at Dartmouth and my son Ryan is a good hockey player. He’s at a boarding school, Belmont Hill School in Massachusetts. I like hitting the ice with him in the summer.