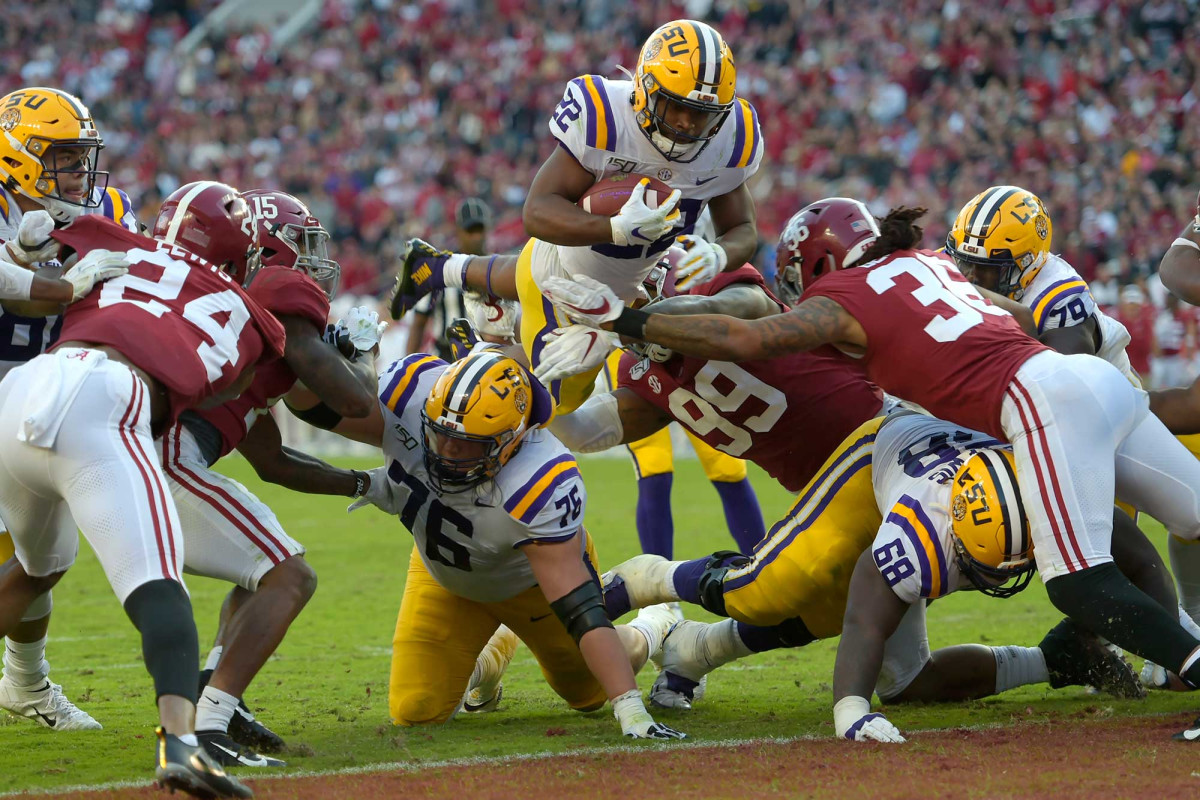 The game spoke for itself as did the high ratings. CBS did a 9.7 which is excellent in this dense day of viewing options. In fact, the network said that it was the highest rated regular season college football game on network television in eight years.

CBS’ SEC package has been must viewing almost every Saturday for years. And it’s the case now too, even while powerhouse Tennessee suffers from a galling downfall. When you have the heritage of Alabama, Georgia, Auburn, LSU and Florida, that’s a pretty attractive menu.

Lots of drama and attention in last Saturday’s LSU-Alabama game, of course. And so much at stake.

So I thought I would break down CBS’ two protagonists, Brad Nessler and Gary Danielson.

Brad is such a steady presence on big games. The moment never seems too big. But let’s face it. This guy still has the unenviable task of filling the shoes of our jovial Uncle Verne Lundquist, who presided so warmly for years over the CBS SEC mic.

The truth is that Nessler has the broadcasting chops and pedigree. He has become so reliable yet doesn’t have that ‘by-the-fireplace blanket over us.’ We became so accustomed to Verne, where the SEC broadcast became an intoxicating experience. The late afternoon sun faded into early evening darkness so effortlessly during the game.

I like Nessler but just not in a Verne way and that’s probably unfair to a degree because really, how many Vernes have there been?

Nessler expertly guided the viewer through the ebbs and flows of this high level tilt. He noticed early on that Alabama quarterback Tua Tagovailoa came down on his surgically repaired ankle awkwardly. It was clearly a theme in the first half. Tua struggled at times as opposed to his counterpart, Heisman candidate Joe Burrow who Nessler reminded us several times, was an Ohio State transfer.

Nessler was also able to connect the viewer to the mood inside the stadium when a stunned Alabama home crowd watched helplessly as LSU built a large lead. One thing about Nessler that really stands out is the chemistry he’s fostered with color man Gary Danielson and it strikes me as genuine.

Brad does a fine job of setting up Danielson to the point where it is conversational. There was a head scratching moment where the viewer was uncertain on a catch/no catch call on the sidelines. Nessler, Danielson and CBS’ on-air rules man, the veteran Gene Steratore, were convinced that Thaddeus Moss’ catch inside the five would be overturned. It wasn’t and it ultimately led to a key touchdown just before the first half ended.

On the flip side, I’ll give the CBS trio some rope. They did provide an explanation after halftime as to why it was ruled a catch but Nessler seemed incredulous and basically said, “Okay, whatever.” They then moved on with the broadcast. Another thing I liked that Nessler touched on was the fact that Alabama really needed a respectable second half, even if it lost; to showcase to the playoff committee that it would still be a viable representative. Mission accomplished. LSU wins 46-41 in a thriller but the viewer came away knowing that Alabama was still very much part of the conversation.

I’ve watched Danielson for years and this was one of his strongest games in my memory bank. Danielson is an excellent teacher of the game. He’s also an ex-quarterback himself.

For example, he noted the toughness of LSU QB Joe Burrow on a scramble where he explained that Burrow doesn’t like to slide. At that point, Nessler said he caught up with Burrow this past summer and asked him about sliding and Burrow insisted, “I don’t slide.”

At another point in the second half, Danielson went into the art of open field tackling. He feels it’s the most important aspect of modern college football, given the spread-out offenses and the problems these offenses give defenses. Usually when games are being dissected, we hear about great route running, quarterback play or even pressure on the quarterback from a stout defense. I can’t ever recall a comment about open field tackling being the most important aspect of the modern college game.

An insightful and worthy comment like Gary’s can have viewers watch games differently. It was a comment that stuck and made you think. It also didn’t require jargon that confuses the uninitiated fan. It’s also precisely why Danielson does better than any college analyst. He goes deeper.

When LSU coach Ed Orgeron faced a decision to either go for a first down or punt from midfield with a comfortable lead.  Danielson was right on it. He said there’s a difference between being aggressive and reckless. In other words, if Orgeron went for the first down, it would be a reckless decision. Ultimately, LSU punted.

At that point, Danielson did a good job of taking the viewer into the decision-making process and down to the sideline with Orgeron and up to the booth with Danielson. It was 3 dimensional and deep.

Nessler gets an A-. He kept the viewer engaged even when it seemed the game can turn into a blowout. He is also really well prepared and has an experienced rhythm. What’s missing, and it takes time, is the past connection to the hearty Lundquist who was synonymous with the SEC broadcasts.

Danielson earns an A+. The game helped make him. Tough when he needed to be, decisive, takes great command of being instructional when there are teaching moments and he’s also insightful.

CBS gets an A overall. Along with Sean McDonough and Todd Blackledge, Nessler and Danielson are atop college football’s announcing pyramid.