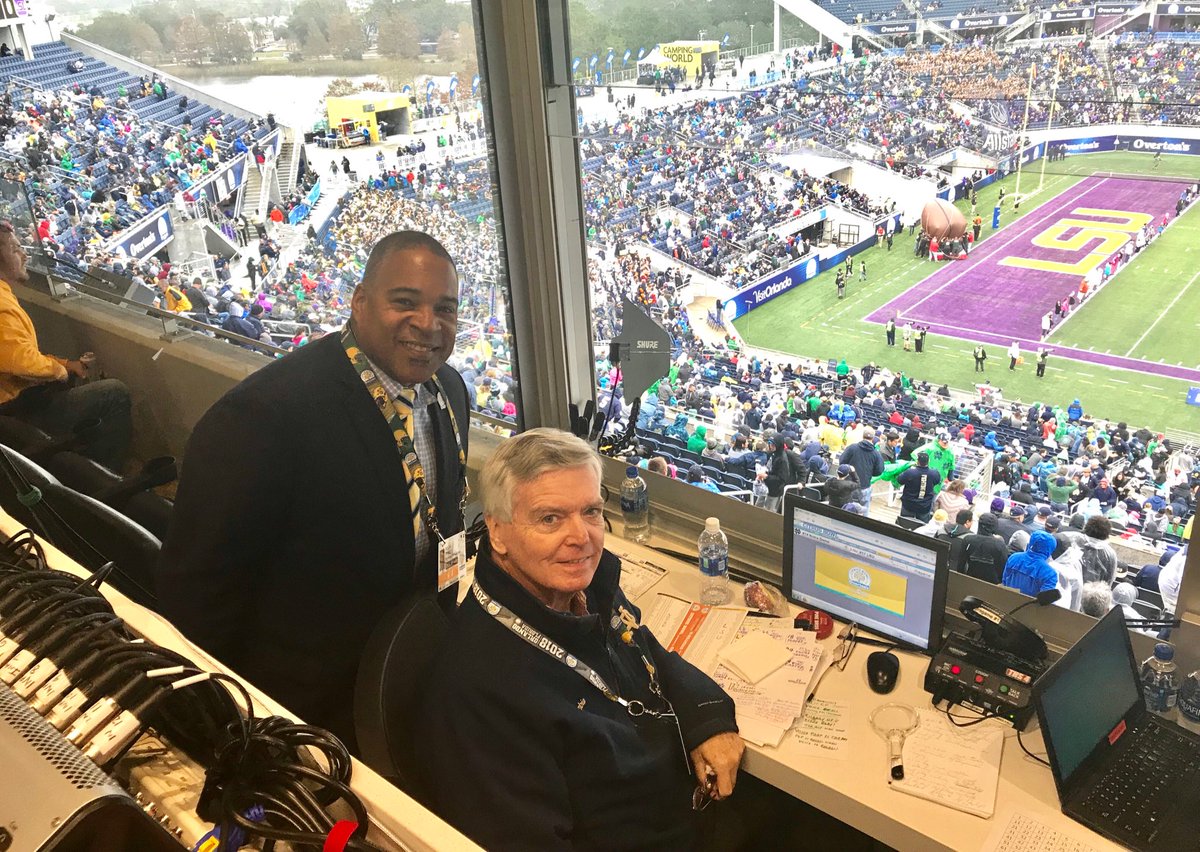 The Pro Football Hall of Fame doesn’t grant the Pete Rozelle Media Award to just anyone. Think of the many qualified network broadcasters, so identified with the NFL, who haven’t been honored; Howard Cosell, Brent Musburger, Joe Buck, Dick Stockton, Greg Gumbel and Mike Patrick. How about all the wonderful local broadcasters?

Then again, Don Criqui, the 2003 recipient, isn’t just anybody.

Not to sound flowery, yet for many fans of a couple generations, fall was only official once the air was crisp, the foliage was ubiquitous and Don Criqui welcomed viewers to another network football telecast. By my count, the Buffalo reared announcer did the NFL on network television for 47 consecutive years (1967-2013) after which he continued his Notre Dame play-by-play through the end of last season. That’s 51 straight years calling football. Don will tell you too that the season before he started doing the NFL, he actually did the CFL with the late and legendary boxing announcer, Don Dunphy. So that’s 52 straight years covering football.

As such, his sonorous play-by-play was a soundtrack of the game; a comforting voice, whose warm command resonated through five decades of football broadcasts across the American landscape. He did the NFL on television, two stints of Notre Dame on radio nationally and a pair of Super Bowls on network radio. Don also did 14 straight Orange Bowls for NBC during New Year seasons.

While the name Don Criqui will always be synonymous with football, he also did Mets baseball, lots of basketball, covered the Olympics and more. In fact, when the old American Basketball Association got network visibility on CBS in the early 1970s, Criqui ws the league’s first voice. Later, he did quite a bit of the NBA as well.

In New York, Don was a fixture in radio’s morning drive, first as the sports sidekick for the mellow John Gambling and later for the edgy Don Imus.

Criqui is also the answer to a trivia question. Who preceded the legendary radio voice of the Knicks, Marv Albert? Don did the games during the 1966-67 season.

Away from football stadiums for the first time after half a century, Don is making an adjustment this fall.  But as he tells us in the Q&A, he’s still active, keeping his hand in podcasting.

You’ve called football on network television or network radio for over fifty years. This is the first season you’re home on weekends. How does it feel?

I am not broadcasting games this fall but I do a two hour sports talk show, Criqui’s Corner, with one of my sons, Galen. It’s on the website talkstreamlive.com Sunday nights from 9-11pm ET. It is also heard on a number of over-the-air stations. We also do three ten-minute sports commentaries on America’s First News that are heard on over 90 stations. No games but still on the air!

You were a prodigy, doing network games in your mid 20s. How did you break in?

I attended Notre Dame and started with the student station , WSND.

Longtime network broadcaster Tim Ryan says he was a senior at Notre Dame when you were an underclassman and had some fingerprints on your early assignments. Any recollections?

Tim Ryan was the Sports Director and he assigned me to broadcast a lot of Notre Dame basketball. Thanks, Tim! CBS Sports liked a tape of a Notre Dame vs.  Bradley basketball game I did and Bill MacPhail (then the president of CBS Sports) hired me for NFL games.

You grew up in Buffalo, (home of Tim Russert and Wolf Blitzer) and from a sports perspective Bill Mazer. At what point of your youth, did you know that you wanted to be a sportscaster and who influenced your style?

In grammar school in Buffalo, I heard Bill Mazer do a Canisius College basketball game on radio. It influenced me greatly. I really learned play-by-play listening to Bill. (Mazer later became a popular New York sportscaster on radio and television.)

When I would see Bill, not only would I remind him that I listened to him, I rattled off some of the sponsors.

Bill might have been trained as a cantor. We were working a football game together somewhere and he tells me, “Don, I wish they would let me sing the national anthem on the field.”

You’re a winner of the Pete Rozelle Media Award bestowed by the Pro Football Hall of Fame. Howard Cosell and Brent Musburger are not. Any thoughts?

Brent and Howard should both receive the Rozelle award. They were special figures in network coverage of the league. I can remember Dick Enberg telling me that Cosell never got the recognition he deserved. Howard helped define the NFL on television. Brent did with his studio work.

It’s funny. Quite a few announcers don’t like three men booths. Yet, the most successful football broadcast ever was Monday Night Football with Frank Gifford, Don Meredith and Cosell.

There are times I would prefer a three man booth than two upstairs and one on the sideline. First, it’s not always possible to get anything substantial from the sidelines and breaking away from the booth can disrupt the fluidity of the broadcast. Of course, the three announcers in the booth must have good chemistry.

The few times I was a part of a three man broadcast. I enjoyed it. My air time working with two others might have been more limited, but who cares? You’re only as good as your overall broadcast.

Through many of your years of network prominence, the number of televised games was limited. The world has changed. Televised games are ubiquitous. You had a unique voice and style. Are announcers today too commoditized?

You’re ahead of me Halby with “commoditized.” The sound of silence is never a bad thing. Wall-to-wall word flow can wear a listener out.

You called the famous Tom Dempsey 63-yard record-breaking field goal in 1970 (“I don’t believe it…”). What were some of the other big unforgettable moments you covered?

There are many great moments. The Miami-Nebraska Orange Bowl in ‘84 is up there. (Miami led 31-17 in the 4th quarter and held off a charging Nebraska team, winning 31-30.) I also did the Chargers-Dolphins overtime playoff game. (Chargers won on January 2, 1982. It was dubbed the Epic in Miami.)

You did the ABA, the NBA, college basketball, some baseball and even non-sports. What was your favorite sport?

My favorite sport has to be football, the NFL and college. They’re the biggest games in town.  Basketball, baseball, hockey and the Olympics, they’re all great.

You were Don Imus’ sports announcer for years. How crazy was that experience and what did it take to work with him?

I was on WOR Radio with John Gambling for twenty years and every year it was the most listened to morning radio show in America. Then I joined the show of another AM superstar, Don Imus That young man also had game! I’ve heard it said that Imus was the greatest talent in radio history! In fact I’ve heard Imus say it many times.

He once told me, “Of all the radio sports guys he’d worked with, I was one of them!” Imus was at his best the first hour of his show, 6-7am. They could have replayed that first hour over and over. It was that good!

Dick Stockton: “Body of work counts more than a moment in a broadcast”

It’s hard to imagine Don Criqui not doing football. My first memory of him is a broadcast he did for CBS–I don’t know which game, and I THINK his color man was Sonny Jurgensen, and they showed them in the booth eating chicken as they broadcast! I think people also forget that he did Wimbledon, and I think he did it when NBC and Dick Enberg couldn’t agree on whether Wimbledon was one event or multiple events. Enberg apparently had a clause that he wouldn’t do more than 50 events a year, based on a desire to have a life… Read more »

I worked with Don Criqui (and Imus) while News Director at WNBC AM. One of the classiest guys I’ve ever known. Please pass along my highest regards.

Mr. O’Brien, I moved to New York City for school in 1988 and got to hear Criqui briefly with Imus, and he was hilarious. I also will never forget the time Imus said something about Tennessee and Criqui said, “Tennessee is a great state if you’re a banjo.”

in 1970 I turned 8 yrs. old and started to watch all sports on tv and for the next 20 yrs. I had the best seat for sports on tv. Living in Southern California I had Scully, Enberg, Hearn, Miller and then there was the national broadcasters. High a top that list to me was Don Criqui! Between his voice and outstanding play by play abilities, Don made those games even more memorable. Especially, the two he mentioned – the Orange Bowl and the AFC Playoff game. Remember them as if they were yesterday not only because they were incredible… Read more »

I really enjoyed Criqui on Imus’ program. His wit was perfect for the show. And Don on network tv could always be counted on to be a little edgy. Once while broadcasting an Oilers game he referred to Glanville’s team as: “Jerry’s Kids”.