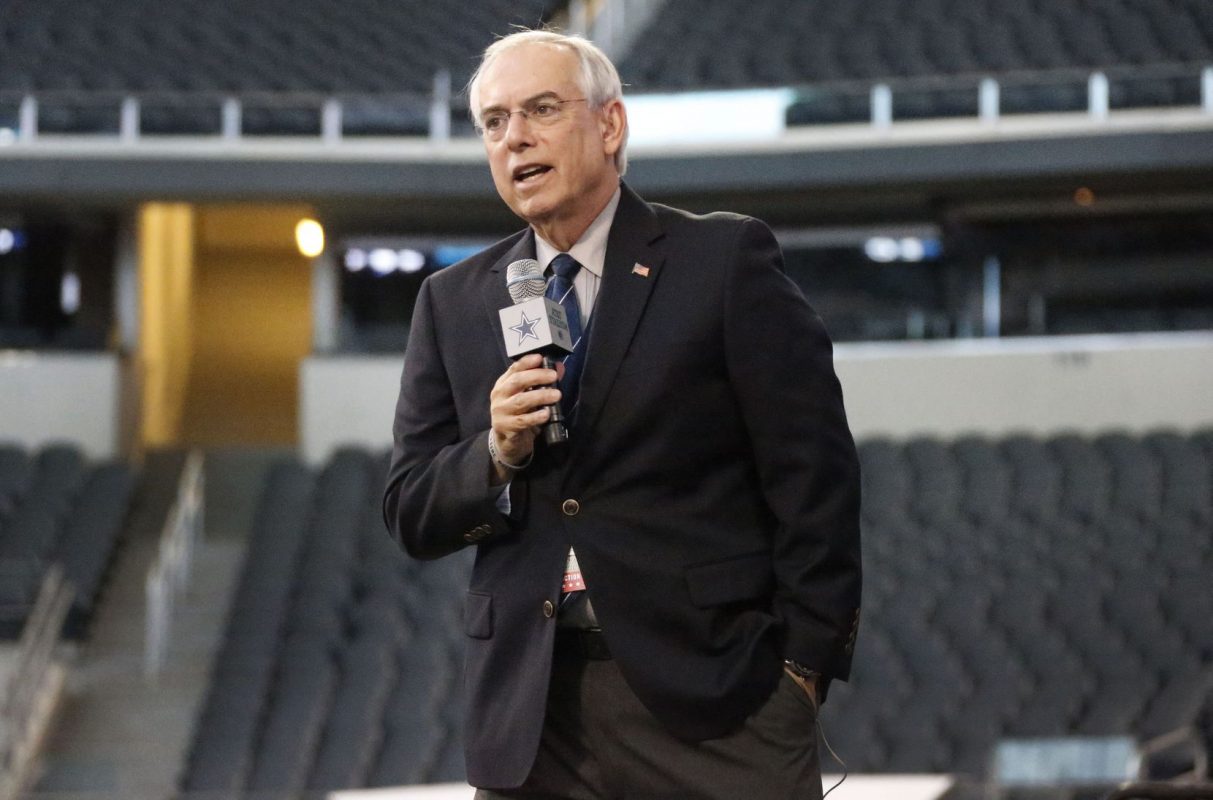 The best of the lot.

Growing up in New York as I did, it meant one thing. When the Giants or Jets played at home, the local radio broadcast was the only way to way to follow the game live. Jets fans of the era grew up with Merle Harmon and Giants’ followers, of which there were many more, had the famed Marty Glickman. Harmon was terrific, He had a marvelous and spirited voice. On powerhouse WABC, Harmon’s signature, “Your dial is Jet Set.” Merle was hired by sports director, Howard Cosell.

The Giants had solid teams in the early 1960s but their strength waned as the decade evolved. Meanwhile, the Jets were building support and attracting fresh fans behind the colorful Joe Namath. Broadway Joe  became quite a personality in the Big Apple. The increasing popularity of the Jets agitated Giants owner Wel Mara who shared his concerns with Glickman.

Because Giants tickets were still impossible to get, Giants fans would often show up at Shea Stadium to watch the Jets. On an overlapping Sunday when both teams played at the same time, Giants fans had their transistor radios on at Shea Stadium, listening to Marty’s call from Yankee Stadium. At that point Marty remembered his conversation with Mara. How about getting Giants fans at Shea to empty their the lungs a bit in the Jets house.

Spontaneously, Marty intoned on WNEW Radio: “OK fans, all together now, Go Giants Go.” Giants Nation responded at both Yankee Stadium and Shea. They did so rhythmically, verbally an enthusiastically. It proved that radio and football were inseparable.

All these decades later, radio isn’t the factor that it was in the 60s or early 70s. Still, bonds build. The longtimers like Gene Deckerhoff, Merrill Reese and Brad Sham are revered among their respective constituencies.

I try to listen to each of the NFL radio broadcasters through the season. Here are the top twelve this season in alphabetical order.

Raspy and never contrived. The husky toned play-by-player has presided over FSU national titles and a couple Bucs’ Super Bowl titles. Simply said, radio and football in the Sunshine State are synonymous with  his name. While he’s an unabashed rooter, (we instead of they), he never sounds dour, win or lose

Passion shows no division. Animated and fiery in a football starved city, he’s a cross between a rooter, a critic and a caring broadcaster who lives and dies with the fortunes of  his team. His voice quivers in the final minutes of a tight game. It’s pulsating to hear him.

Reassuring southern twang redolent of his North Carolina roots. Never sounds programmed, always relaxed and intense only when naturally required. His own man, whether his team is headed for a championship or a long winter. A reminder of his beloved and late dad, Woody who was interconnected with anything Heels.

Soft toned. Never overpowering or intrusive. Comes and goes quietly. Prepared to a fault, interacts seamlessly with partner, doesn’t make a big deal of himself – Also does UC football and basketball. -His roots: like Pasch: Syracuse. Winner: Four times Ohio Sportscaster of Year

A native behind the mic, Tennessee through and through. At age seven, his eyes were as big as doorknobs dreaming sports. Paid his dues, A UT alum, sidekick for years to Vols’ iconic John Ward. Got the  big promotion and is still ecstatic, 23 years and counting. His heart is into every game.

His voice rarely weakens even when his club does. Decades of football glowingly, all games with equal exuberance. His call is as taught and trained, by design not improvisation. Win or lose in Green Bay or elsewhere, boisterous crowds never drown out the booming power of his delivery.

Popular, distinct voice, clips his phrases and enunciates each word rolling off his lips. Shares opinions, gets engrossed and emotional. For years, he did Raiders games until myopically not renewed a year before the club bolted for glitzy Vegas. The Niners jumped on the opportunity. Robinson out and Papa in.

ESPN on Saturdays, NFL radio on Sundays. Sturdy and never whiny. Doesn’t shout or pout, eschews the maddening, cheerleading style of the loud Midwest voices he heard growing up in Wisconsin. Counter-punches whatever is thrown at him. Think Bill Walton, but that’s hoops on late nights only.

Works at his craft. Arguably the best ex-NFLer who turned radio play-by-player. Comes at listeners with a capital of contacts and on-the-field experience, Years in, fundamentals down. Excellent intonation and proficient delivery, snap by snap.

The dean (l) with a commanding voice and an inescapable Philly accent. Longest tenured NFL radio voice, 45 big ones covering a colorful team. Almost fell out of the booth after the Birds won the Bowl. Consider him a city father, as much Philly as the best Hoagie in town.

Brad Sham -72 –  A towering figure in Dallas. Been at it since ’76; Calls games in a narrative fashion. Not the usual staccato, start and stop cadenced delivery; Somewhat unconventional. Often conversational with partner. Still parses phrases smoothly. Weaves in anecdotal comments and infuses some humor.

Energetic, impassioned, descriptive. Reminds me of Glickman who dug into the battles in the trenches and painted riveting pictures of short yardage pick ups. It was a hallmark of Glickman’s detailed call.

Great announcers, all, and I think it’s harder for an NFL radio broadcaster to connect with listeners than in any other sport–thanks to the ubiquity of TV and that today in particular, most teams have to have the color man coming in after every play, even on radio. I was lucky to grow up with Dick Enberg on the Rams and Lindsey Nelson on Mutual’s Monday Night Football.