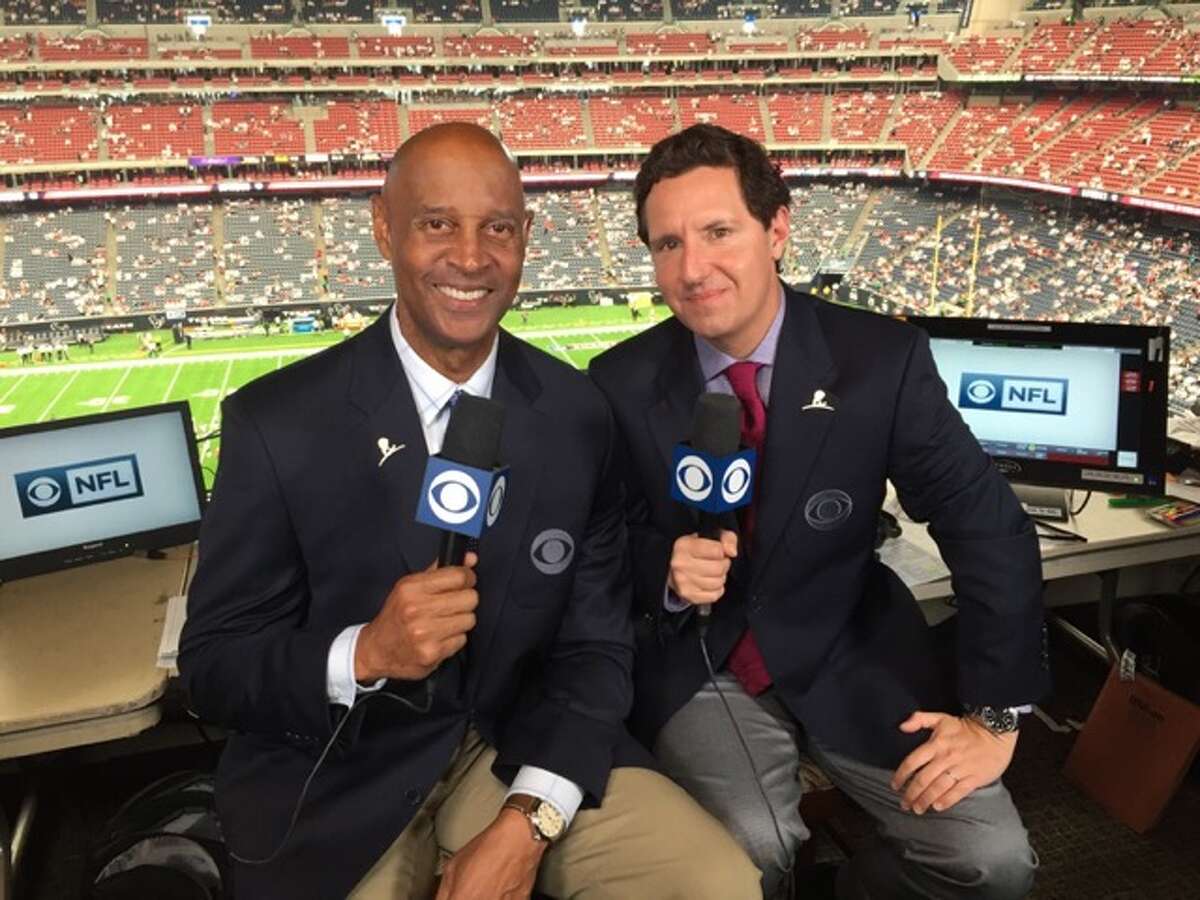 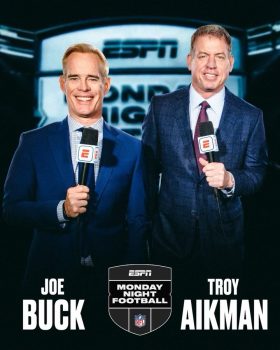 First: Different formats and technology will take some time for the Joe Buck and Troy Aikman duo to figure out. Otherwise it was just like usual.

Mike Tirico was fine. He was half play-by-player and half doctor, while his partner coughed his way through the broadcast. I did feel good for Mike, finally and officially hitting the big time, # 1 at NBC.

Andrew Catalon was raised in Short Hills, New Jersey and graduated from Syracuse University in 2001. It was then and there where he kick-started his career at the school station, WAER-FM. Catalon then moved east, first as sports director at WVNY in the Burlington, Vermont area. It was then down to the Albany area and WNYT-TV as the weekend sports anchor.

Later, the New Jerseyite was assigned play-by-play, calling UConn women’s basketball for SNY TV, a regional cable network in the Northeast. With the enormous expansion of sports television coverage, especially college football, there was a steep demand for on-air talent. By 2013, sets were starting to brim with every DI college football game imaginable.

So Andrew took his growing wares to the CBS Sports Network, getting more and more assignments over the years. He was even busy for NBC during  2016 Olympic Games, worked several Masters Tournaments, and is a regular broadcaster for CBS on the NCAA Men’s Basketball Tournament and the NFL. Catalon’s NFL partner is the talented and sharply opinionated James Lofton, who tells it like it is. Andrew’s laid-back style blends nicely with the energetic delivery of the Hall of Famer. The two make for an engaging viewing experience.

At this point, Andrew is number two on golf, backing up to number one’s Jim Nantz.

Kevin Burkhardt is also a New Jersey guy, from Bloomfield, where his love of broadcasting stemmed from his role model Gary Cohen, a bright and well read alum of Columbia. After graduating from William Paterson University, Burkhardt became a broadcaster for WGHT, a radio station with a weak stick. It enabled him to do sports including high school football.

He wasn’t afraid to do anything, including cutting his teeth in sales. When an on-air job didn’t come along as quickly as he wished, Kevin started selling cars at a Jersey Chevy dealership in Eatontown, NJ. (Bob Licht did the NBA in Charlotte and New Orleans and later succeeded in car sales)

Burkhardt later worked as a radio broadcaster for the New Jersey Jackals, a minor league baseball team. Kevin later landed at WFAN in New York, America’s first all-sports radio station where he worked as a reporter for the New York Jets. On TV, he caught on with Mets programming over SportsNet’s pre and post game programming. Burkhardt joined the greater Fox Sports family beginning on the fourth announce team alongside John Lynch.

Since 2013, he has worked himself up the Fox ladder where he is now the lead play-by-play voice of the NFL, succeeding Joe Buck. The move was a bit of a surprise to many because Al Michaels was available. Fox shockingly never even reached out to Michaels. Inexplicable.

Kevin will now partner with Greg Olsen in the Fox broadcast booth, where he will have big shoes to fill, those of Buck’s and Troy Aikman’s. They’re the expected broadcasters of the 2023 Super Bowl.

Johnson graduated from Howard University after an impressive career on the school’s baseball team, a  first baseman and catcher. Upon graduation, Johnson began his broadcast work as a play-by-play commentator for the Minnesota Timberwolves. He kept himself busy too, calling Big East Basketball. It led to work with MSG Network. In his earlier years, Johnson was on ESPN’s college hockey, college basketball and the CFL.

Johnson also hosted Black College Sports Today on ESPN in 1991, which was a transcendent show in the sports media landscape. One viewer even suggested that Gus move from game-to-game and cover ’em all. Nice accolade but would never happen.

Gus made his mark on CBS, doing the NFL and NCAA Basketball. His high octane delivery, particularly during the tourney, made Johnson a household name.

He’s added to his lengthy resume by calling NBA playoff basketball, for TNT and NBATV. Johnson is known for his high energy and use of catchphrases. Despite this, however, Johnson is not afraid to let the game do the talking, utilizing quiet moments on the microphone to amplify the moment of the match.

But when he lets loose, look out. At MSG Network, Johnson did the WNBA’s New York Liberty and then the Knicks, both on radio and television. Johnson, a Detroit man, is now taking classes and doing research for a doctorate project at Harvard. You won’t hear him on Fox’ NFL this season, just college.

Howard Kellman made us Brooklynites feel proud when he subbed for John Sterling the week before last on a Yankees radio cast. I communicated with him a couple times since. Palpable schedules for each team there was really only one, Fran Healy, an ex MLB catcher. In addition to Kellman who proudly the game at Tampa, were the only voices to call games for both New York teams – even briefly. Kellman who sounded calm, relaxed and knowledgeable with the veteran Suzyn Waldman.

There was another. In the summer of 1985, the Yankees brought Lindsey Nelson to New York to put the seal on the Mets’ thrower’s 300th win. Tom was then with the White Sox. Nelson wasn’t given the vocal space needed to build the ever-remember memorable moment. Lindsey Nelson was gracious on and off the field. The way he would introduce players and executives was elegant. For 17 years, beginning with the club’s start in1962, it was Lindsey Nelson, Bob Murphy and Ralph Kiner.

ESPN is happy to wave the flag on the debut of Buck and Aikman. This afternoon they released these numbers. Dallas’ loss to Tom Brady and the Bucs put up some decent numbers:

“ESPN’s delivered its most-watched Monday Night Football game since 2009 and its third best Monday game in the current era (2006 – present and 270+ games), as 19,845,000 viewers – across ESPN, ABC, ESPN2, ESPN+ and ESPN Deportes – turned in for the Seattle Seahawks’ victory over the Denver Broncos in quarterback Russell Wilson’s return (September 12, 8:15 p.m. ET).”

I remember the quote from Curt Smith’s book, where his old Mutual partner Al Wester said there isn’t anyone in the business who had a bad word to say about Lindsey Nelson. Rare, sad to say. Nice job!