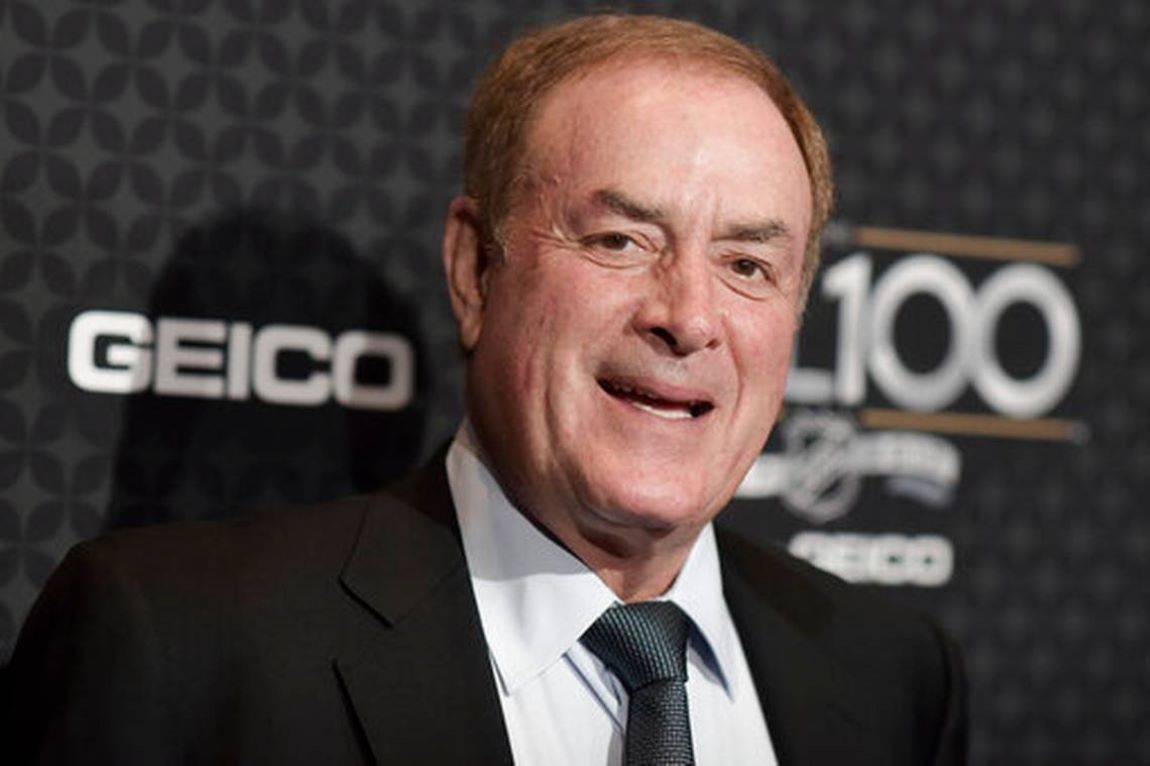 The musical chairs were never more active, neither were the moves, out one set of doors, and through the next. It’s been a dizzying few months. I can’t recall this ever occurring, not in such a volume. The nuttiness this year turned into one big shenanigan.

CBS will remain for the most part intact. No major changes are expected to be forthcoming. But in this tumultuous 2022, who knows? The wonderful James Brown has been less visible in the recent couple seasons with the advent of Nate Burleson who first popped onto the scene at NFL Network. He’s now more assertive and as connected as anyone with CBS’ The NFL Today. Jim Nantz is back as the Tiffany’s number one for its Sunday afternoon doubleheader. Humorous and cheery, Tony Romo and Nantz are a good joint act.

NBC uprooted the most seasoned of all network NFL voices, Al Michaels. He had been under contract with NBC through the Super Bowl. Mike Tirico was promised Al’s SNF gig and he will indeed begin to preside over the Sunday strip this fall. Michaels, 77, doesn’t sound a day older than 60 as evidenced by his flawless performance, calling a riveting Bowl in February.

Michaels and Bob Costas were two NBC stalwarts. Bob’s NBC career began in 1980. He is known for doing play-by-play of multiple sports, mostly baseball, and is considered sports’ best ever host with a dozen Olympics on his resume. Costas left the network’s Olympics and SNF broadcasts after 2016, entirely by his own choice. In late 2018, Bob and NBC decided that the “emeritus” portion of their agreement was not working out to the satisfaction of either party.

As you’ve been reading, Al is shifting to Amazon Prime where he’ll do play-by-play of the streamcaster’s NFL’s Thursday night schedule. He’ll also retain limited NFL assignments at NBC, select regular season games and a playoff matchup. NBC and Amazon will be joined at the hip producing the Thursday games.

ESPN/ABC startled the sports broadcast world, spending a mint to dress up their commonly managed ESPN and ABC booths, bringing over, first Troy Aikman and thereafter Joe Buck. Fox didn’t put up much of a fight. It was a chance for Fox to cut down cost of talent, recruit younger and to lower paid announcers. And so it did. It appears now that Kevin Burkhardt will engage with both NFL and MLB broadcasts over which Joe Buck did for years. When Aikman left Fox for ESPN, he did so because he got a raise of $6 million or so. Troy also didn’t feel he was treated fairly by Fox, apparently not enough loved showed. Aikman was paling in salary to Tony Romo even though he had higher on the field numbers. The last few years, he asked Fox for ‘Romo-like’ money and didn’t get close to it. Buck followed partner Troy to Bristol.

Fox  hasn’t officially named its play-by-play and color talent, but it appears and inexplicably so, that that the bosses never reached out to Michaels. That’s baffling and almost bordering on mysterious. Why? Could it be slashed budgets? Is it Al’s  age? Vin Scully proceeded smoothly deep into his 80, Brent Musburger still does Raiders games on radio. He’ll be 83 in May and is still as feisty as ever. He still has the edge. Al is also as sharp as a tack. (Exhibit #A: Michaels is current: This past Super Bowl, Silky Smooth) So with Fox out, only Amazon remained. While I’d imagine that Fox or ESPN would have been his preference, both opportunities curiously slipped  out of grasp. Bristol is now bringing over a duo who worked symbiotically at Fox, Buck and Aikman.

Don’t judge people by their age. Last time I looked, Warren Buffet was 91. His stock, Berkshire Hathaway is up this year, when popular averages are palpably down.

Amazon is hiring Al Michaels for its new independently produced Thursday Night Game streamcast. It’ll be available free to the company’s Prime Time members. Al and new partner Kirk Herbstreit will be an odd couple. You’d hope that Herbie will be smart enough not to step all over Michaels, as he does on ESPN, killing play-by-player Chris Fowler by a thousand say-nothing cuts. The only challenge worse than Herbie is for a play-by-player to keep peace in a three man booth.

Al’s done the NFL for decades. A gorgeous pass today will remind him in a heartbeat of parallel plays through the NFL’s history. It triggers memories and it enhances historical moments

Notes and the inexplicable 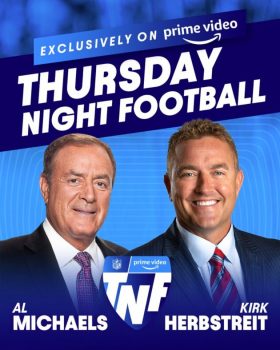 I’ve been told that the Amazon men met digitally so to speak (I assume Zoom) and got acquainted. Both men came prepared. I took a look at Kirk’s auto-bio, Out of the Pocket. In there is some positive mention of Michaels. Over the last 20 years, Al has had two prominent partners, John Madden and Cris Collinsworth. It’s some pretty big company for Herbie to match.

Like it or not, no matter how highly Herbie thinks of himself, it’s Al’s broadcast. Kirk will have to take his lead from the play-by-player and if Herbie gets out of line and encroaches too much vocally, I would assume that producer Fred Gaudelli will steer him right back into his lane and urge him to use an economy of words. Al hasn’t done much college football since the 80s and Herbie only a handful of NFL in his lifetime? Who at Amazon examined his resume or watched his tapes? What does he know about the NFL?

Hard to believe that the Foxies didn’t snap up Al. Word was that Fox’ backrooms were split, Al or the others. The whole process must have been an emotional roller-coaster. Fox it appears is going cheap. ESPN is throwing $ around.

Fred Gaudelli, the man who produced multiple decades of network NFL play-by-play including Al’s SNF on NBC should have had a seat somewhere around the decision-making table when it came to the analyst.

How will Amazon’s Michaels and Herbstreit get along? On ESPN, Brent Musburger dealt with Herbstreit smartly, never giving him enough space to belt out unending speeches. Remembering the way Brent treated the situation, he’d call the play and would breathlessly ask Herbie a quick question often of the yes or no variety and sometimes by challenging him.

The agency that represents Kirk, WWE, apparently has a tight relationship with Amazon. It sold Amazon on Herbstreit’s on-air wares despite the fact that he had no NFL experience on the playing field and little in the pro booth. As it launches, Amazon seems confused. Michaels will bring the network consistency and good team work.

When Fox tightened the spigot, names like Gus Johnson, monotone Joe Davis and the growing Adam Amin, surfaced. Gus is more about name familiarity but is often about inanity, ill-preparedness and screechiness .

Supposedly at the get-acquainted electronic meeting, Herbie assured everyone that he grew up admiring Al and is looking forward to working with him. I’m sure that he didn’t want to be viewed as iconoclastic among the voices. He likely said all the right things. So yes, this will require an adjustment for a man who’ll have to learn to talk in measured intervals and conform to a master’s style.

Al will do each Thursday night game on Amazon, a couple Sunday night matchups, filling in for Tirico and a post-season game on NBC,  For Al, this was it. It may not be exactly what he wants or deserves but he’ll do what he loves each fall. And at $30 million for three years, enjoy!

The winter and NFL announcers took more turns than Fenway Park. Had Joe stayed at Fox, there would have been a good chance, that Al and Aikman would have teamed at ESPN. Yet, so be it.

The Michaels-Herbstreit marriage reminds me of arguably the NBA’s best radio play-by-player, the late Joe Tait. He worked alone and painted colorful radio pictures for decades. Late in his career, he  suffered a heart attack and was sidelined. When he was out, the Cavs hired Jim Chones as a permanent analyst. When Joe came back, there was an an additional chair alongside his. Before they started, Tait set explicit instructions. “Before you want to talk Jim, raise your hand.”

Loquacious Herbie talked his nimble lips past the ESPN lawyers, convincing them to include a clause which allowed him to accept the NFL spot for Amazon. You don’t see that often. Kirk will have some busy weekends, ESPN Game Day, a Saturday night college prime telecast and at an NFL Thursday night venue. He can get held up by weather.

For Al it turned into an end-game squeeze-play. It was the last opportunity and he got it.

The timeline of deals that forced the Amazon landing for Al: Aikman to ESPN, Herbstreit to Amazon, Joe Buck to ESPN, Fox indicating that it would stay in house on game announcers. It left him only one potential employer, Amazon. Word on the street was that Fox’ backrooms were split on where to go. Bring in the big name in Michaels or give the younger voices at Fox a chance.

From Al’s perspective, you might say that he will be viewed as the progenitor of streaming play-by-play which will dominate viewing consumption for decades. Michaels will be remembered as a sports streaming pioneer just as Bernie Shaw became cable’s first news anchor on CNN in 1980. If this is his last gig, Michaels will leave with a flourish.

Another great and insightful column by you, David. I really thought Al Michaels was going to first ESPN/ABC as it made such common sense, especially with a Super Bowl going to them. Then when Joe Buck left Fox, I thought it will be Al, a no brainer. Fox has two of the next 4 Super Bowls; Fox would need a new #1 analyst (who better to help in the booth with then Al); Al loves talking point spreads and Fox is trying to capture more of that area; and the cost for Al would be 4 yrs. at $10 million… Read more »