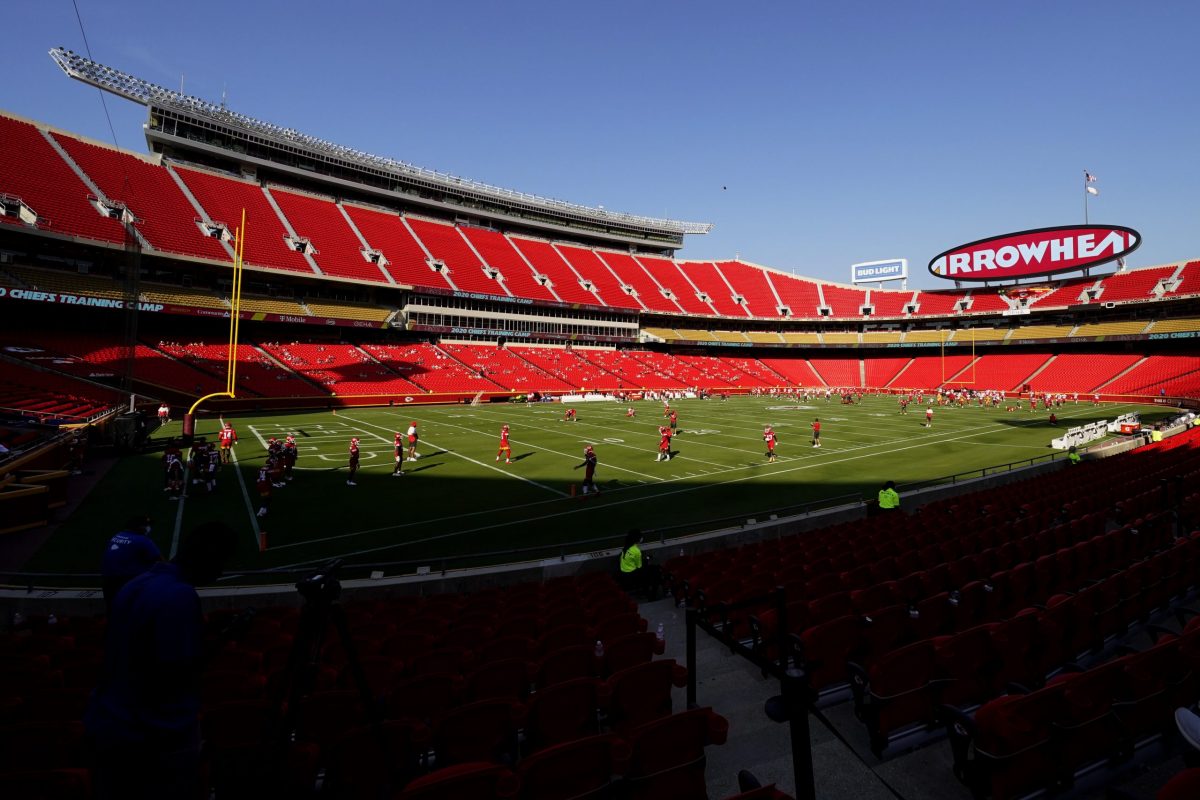 Don't expect a full house when Houston travels to KC in Week #1 of the NFL 2020 season. A strange and fluid season is about to begin.

Early ratings today (Friday, 9/11) suggest that last night’s KC-Houston game was down 12% from last years’s NFL opener on NBC. Some fans might feel that sports broadcasts are being deluged with political messaging. Long way to go before drawing conclusions.

Fox has the doubleheader this first weekend and will carry the Tom Brady matchup, Tampa Bay at New Orleans. Voices, times, market coverage and percentage of country listed below. Joe Buck and Troy Aikman are on it.

Additional Play-by-Play Announcers not working this week for Fox are  Tim Brando, Joe Davis and Brandon Gaudin. One name not listed is Sam Rosen, 73, who’s called NFL games for Fox since 1996. Last time I looked, no one is getting younger.

Last minute development. The NFL requires media members who’ve traveled outside the country to be back in the United States for two weeks before they’e allowed in a stadium. Kenny Albert had been in Edmonton, Canada covering hockey. Yesterday, he left there, connected planes in Toronto and headed for Detroit where he was scheduled to do the Bears-Lions game. When notified in Detroit of the NFL’s decision, he got on another flight for New Jersey where he lives.

Dick Stockton, one of the great pros of all-time, sits in last minute. I’m sure Kenny turned over his depth chart to Dick. Kenny’s a good guy but he undertakes an excessive number of assignments so this doesn’t completely surprise me. One of these years, some logistics issue was likely to surface. If he goes back to Canada to do hockey, he’ll need to be sequestered there. Hope he enjoys his well deserved time off.

The only solution I can think of is that NBC allows him to do NHL games from its studio in Connecticut.

Great to have Stockton continue to work. He’s on a limited schedule this season. According to Un/Necessary Sports research, he’s done 708 NFL games. That’s lots of Sundays away. At 77, he’s still a comfortable voice.

Kevin Kugler and Adam Amin are new to Fox’ NFL roster of steadies. Amin, signed by Fox from ESPN, is solid at MLB, football and basketball. He’ll serve the Foxies well. Most of Kugler’s experience is on the radio side. He’s done some work for Fox in the past and for the Big Ten Network.

Sean McManus, CBS’ Sports CEO, suggested yesterday that most of the focus on issues related to social justice will be covered in pre-game programming. Look for the play-by-play team to keep their commentary to the activities they see on the field. McManus’ answer was in response to a question I posed about viewers being deluged with political messaging on other sportscasts.

Sideliners will be stationed in a trench along the first row of stands. They’ll have limited ability to roam. We’ll see how that works out.

There will be Plexiglas between the announcers in the booth. Jim Nantz said he’ll have to get around things because he and partner Tony Romo have a “touchie-feelie” way of communicating.

I was impressed with Romo. When he heard my name of the CBS media call Thursday, he said he has several books written by my distant relative of the same name, David Halberstam, a truly star-studded and versatile author. The real David was killed in a car crash in California in 2007. He was there to interview Y. A. Tittle who’s since passed.

ESPN’s new MNF crew is made up of Steve Levy, Brian Griese and Louis Riddick. The always reliable Lisa Salters will work the sidelines. When asked about an opt-out on their contracts, Levy said, “I have an out on my contract to become a General Manager if anyone wants to offer me.” The Long Island wit of Levy!

Another change you’ll see is the move by Charles Davis from Fox to CBS. He’ll be teamed with Ian Eagle. Davis is bright and likable.

The NFL voices will be on site to cover action live. the networks have a backup plan in place should this have to change. MLB is done remotely.

It appears at this point that Fox is the only network planning to use virtual crowds, similar to what it does for baseball. One reason is that it’s expensive. Detroit-Chicago broadcast gets the virtual fans.

Here ya’ go. Enjoy week one.

Thinking of Nantz and Romo, I’m reminded of John Madden talking about how one week, Pat Summerall would be on one side of him and the next week he’d be on the other. He wondered why and Pat silently rolled up his sleeve to show the bruises where John grabbed him!

Lindsey Nelson recalled a play-by-play broadcaster who would put his hand over the analyst’s mouth if he didn’t want to hear from him. I wonder who THAT was!