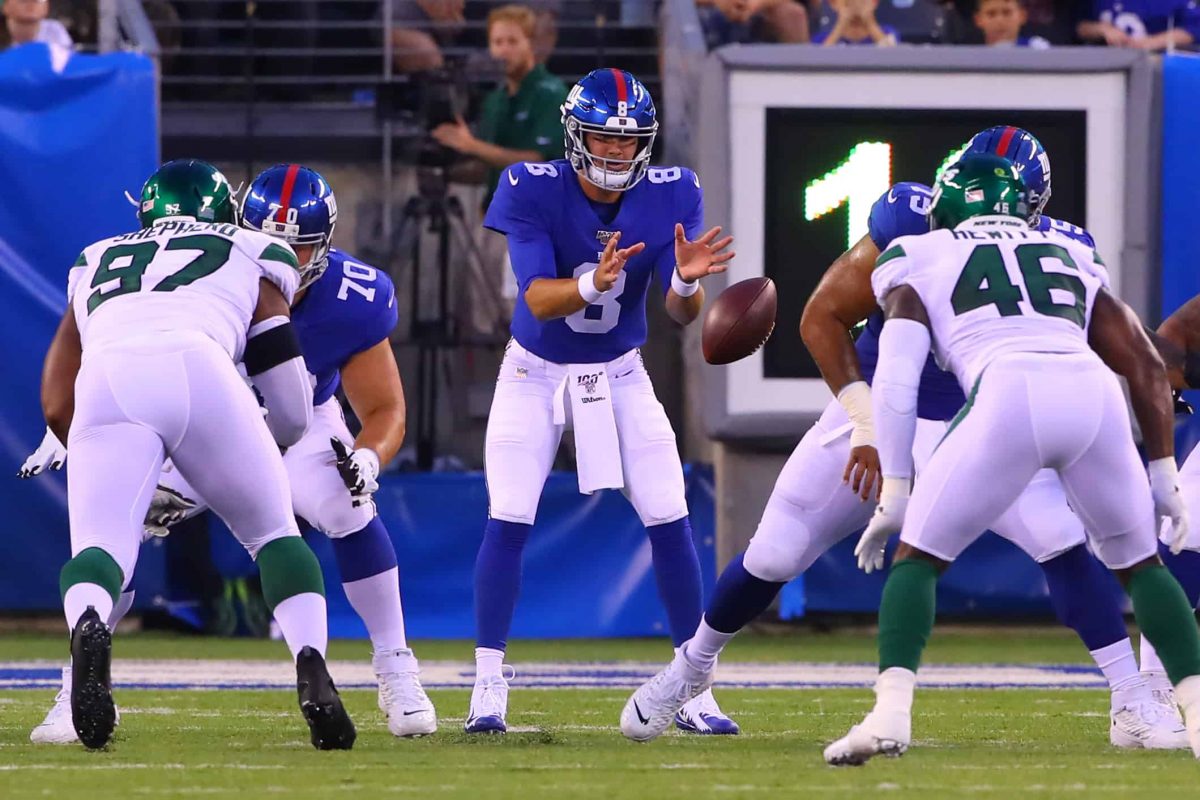 Jake Baskin has a profile of Joe Tessitore just below the schedule.

9% of the USA, Baltimore across parts of the Mid-Atlantic, Pennsylvania, Southern Ohio and Kentucky. Baltimore, Washington, Pittsburgh, Cincinnati, Louisville

67% of the USA. Largest distribution in the 1 o’clock window. Pretty much everywhere except the Northeast corridor, much of Florida, Arizona and Oklahoma. Tulsa and Oklahoma City get Arizona game due to a gentleman named Kyler Murray.

23% of the USA. This inner city battle will be distributed through the Northeast Corridor and South Florida, jokingly dubbed, “The Sixth borough” due to all the transplanted  New Yorkers. Markets:  New York, Washington, Baltimore, Philadelphia, Boston, Buffalo, Miami, West Palm Beach

7% of the USA, Much of Florida, Arizona and Oklahoma, some 11 markets; Tampa, Phoenix, Oklahoma City, Orlando, Tulsa

Jim Nantz, Tony Romo (the #1 team will be on this)

52% of the USA, This telecast dominates most everything west of the Mississippi. It also extends through parts of the Carolinas and Northern Florida: Complete states of Texas, California, Washington, Oregon and Colorado

70% of USA, except geography that gets Rams-Steelers below

15% of  the USA South Florida, State of Indiana plus a few other clusters that dot the map: Miami, Indianapolis, Atlanta, Chattanooga, New Orleans and a biggie, New York City. The reason that the Big Apple is getting this one is CBS can’t run in the market during the 1 o’clock window when Fox has the Jets vs. Giants. So the only game that CBS has available in the 4p window is this one, Miami-Indy

100% coverage of USA, ESPN is in some 84 million homes  (Editor’s observation: Suits and ties have gone the way of Pony Express. Yet Tessitore dresses to kill. I’d bet he buys bespoked suits. I’m no haberdasher but Joe’s suits aren’t off the rack. Still, I can’t help but note how the sleeves at his shoulders fall perfectly down his arms without a hint of a wrinkle. That requires lots of work by an old-school tailor. Look good, feel good, maybe broadcast good!) 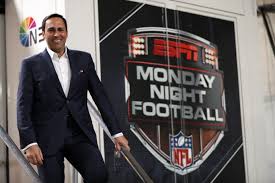 Joe Tessitore has the call of this week’s Monday Night Football matchup between the Seahawks and 49ers. Tessitore is in his second year as the voice of Monday Night Football, working alongside two-time Super Bowl champion Booger McFarland, who moved from the sideline to the booth this season following Jason Witten’s return to the Cowboys’ playing field.

Tessitore, 48, graduated from Boston College in 1993, a classmate of Jon Sciambi and Bob Wischusen. He worked in local television as a sports anchor in his home market of Albany, New York as well as Dallas before joining the CBS affiliate in Hartford, Connecticut in 1995, soon becoming its lead anchor.

With ESPN’s Bristol headquarters nearby, the Worldwide Leader started keeping tabs on Tessitore, and he got his first work with ESPN in 2002 as a boxing blow-by-blow announcer. He has been the network’s lead boxing announcer ever since, and was the voice for EA Sports’ Fight Night video game series. He quickly was assigned other roles within the network, including hosting Belmont Stakes and Breeders Cup coverage, calling play-by play for college basketball, and dabbling in hosting reality shows, namely ABC’s short-lived revival of Battle of the Network Stars and its miniature golf competition, Holey Moley.

Tessitore started doing college football for ESPN at the very beginning of his tenure, and developed a following among fans for the tendency of games he was calling to produce exciting moments, known as the “Tess Effect”. He became ESPN’s lead Saturday night announcer in 2016, and held that role for two seasons before taking the Monday Night Football job, switching places with Sean McDonough.