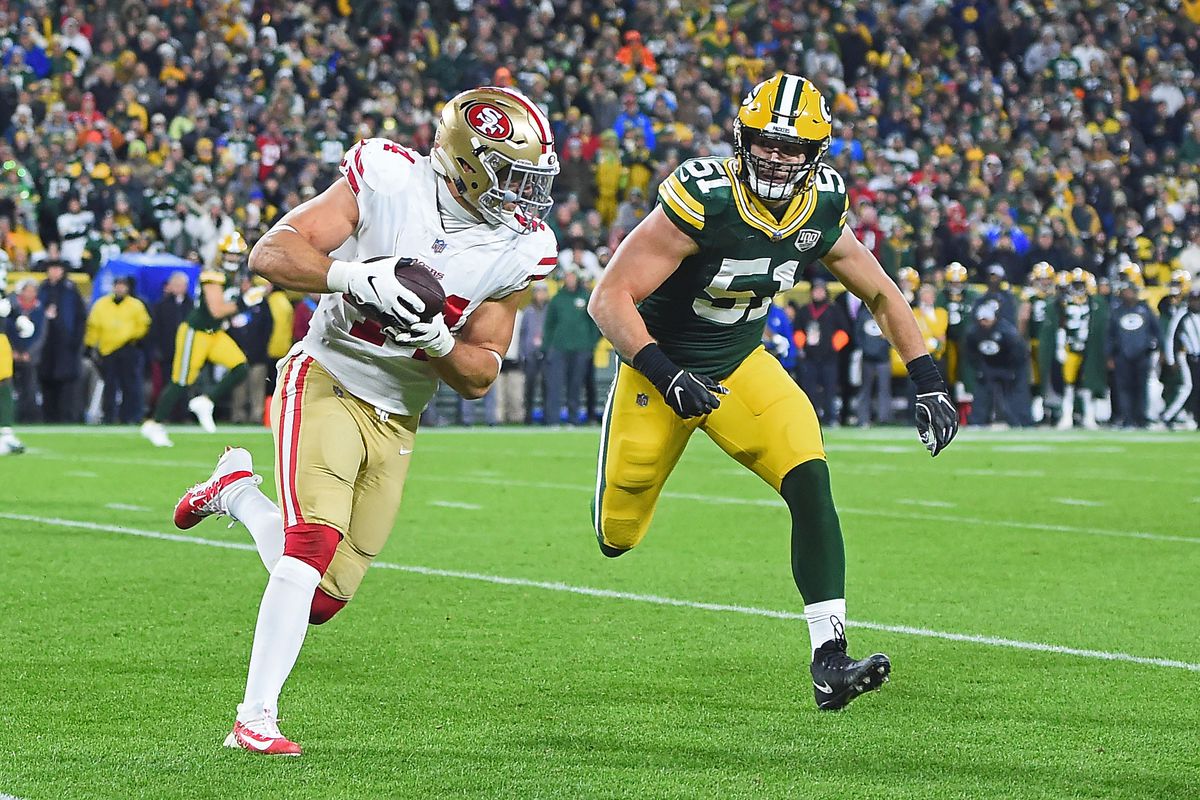 To the sidelines and age comparisons:

As for CBS, the average age of its sideliners this week is 38. Tracy Wolfson, 44; Jay Feely, 43, Evan Washburn, 36, John Schriffen, 35 and Melanie Collins is the baby sideliner this Sunday, 33.

As an old boss once said, just the facts. Fox has six women on the sidelines and CBS has two women and three men. Aren’t these stats better than the numbers on third down conversions?

Jake Baskin has a nice profile of Eagle below the list of this weekend’s broadcasts.

100% of country on Fox, As of June, Amazon Prime had 105 million subscribers

(6%/24) all 5 in Colorado, 4 in Curt Gowdy country, Wyoming, 8 Upstate New York towns, 2 in New Mexico, 2 in Idaho but not the state capital Boise; Scottsbluff, Nebraska; Rapid City, SD and Salt Lake City, a town through which Jim Nantz traces his career.

(61%/285) Seen anywhere the other 4 Fox games in the 1p window are not; e.g. 11 California markets and all 19 in Texas. If you’re west of the Mississippi River, you’ll like see this game. All of Pennsylvania gets this too.

(7% /20)  Where you’d think. 6 blanketing Ohio, 5 in West Virginia and Pennsylvania (not Philly), 2 in Maryland (Baltimore, AFC competitors, of course) and 2 in Kentucky.

(20%/23) All 11 California markets plus Medford, Oregon across the border. In the Empire State, only New York City, blame Denver at Buffalo for that, Hartford, Ct, 2 in Nevada and 5 in Kansas and 2 in neighboring Missouri. Talk about a mixed audience, the heartland and the progressives on the coast. That’s the beauty of sports. It brings us together.

(7% /14 Markets) All of Michigan and Virginia; Washington, DC and Toledo, Ohio

Ian Eagle has the call for Sunday’s late afternoon matchup on CBS between the Jaguars and Titans. His partner is Hall of Fame quarterback Dan Fouts. This is Eagle’s 22nd year as a part of CBS’s NFL coverage.

Eagle, 50, grew up in Queens and graduated from Syracuse in 1990. He landed a job with WFAN as a producer directly out of college and quickly made a name for himself with the station, receiving his own baseball show alongside longtime MLB pitcher Tommy John. In 1993, he became the Jets’ pre- and post-game host and in 1997, Ian moved to the play-by-play role, his only season as the radio voice of the Jets before migrating to the national airwaves.

Eagle is likely most associated with the Brooklyn Nets franchise. He was named the team’s radio announcer in 1994 at the age of 25, when the team was still in New Jersey, and moved to television a season later. He took a secondary role on the team’s broadcasts for six seasons when YES Network brought in Marv Albert, but returned to the primary spot when Albert left in 2011. He continues to call the majority of games for the Nets, and also calls NBA games for TNT.

Eagle joined CBS in 1998 as an NFL and college basketball announcer and has called games in each of the last 22 NCAA tournaments, primarily working with Jim Spanarkel, one of his partners with the Nets. Ian called seven Army–Navy football games, and continues to contribute to early round coverage on the French Open for the Tennis Channel. Currently in his sixth season as CBS’s #2 NFL play-by-play announcer, he worked with Mark May and Solomon Wilcots before partnering with Fouts in 2010.

His son, Noah Eagle, who graduated from Syracuse last June is the radio voice of the Los Angeles Clippers.