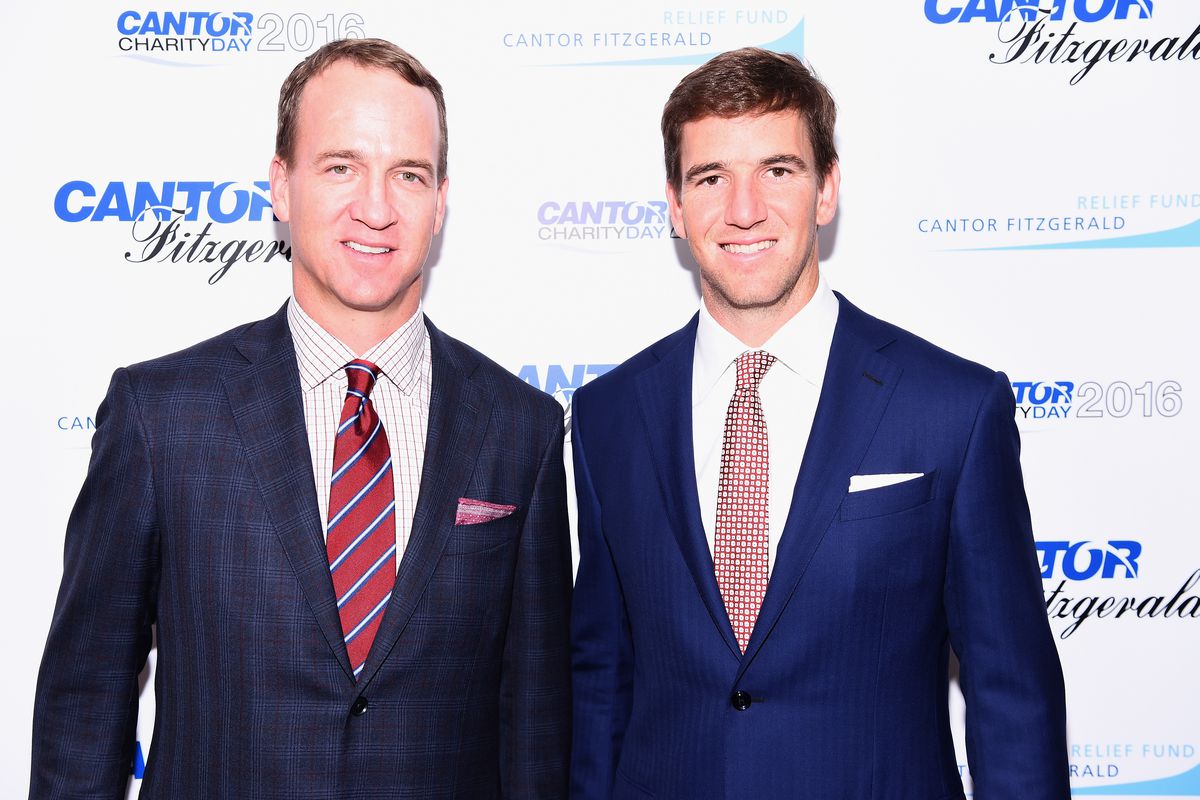 The Mannings; Peyton, left and Eli)

I saw a chunk of the Mannings ESPN2 performance. The siblings did a wonderful job. But it felt more like a split-screen production, two non-complementary broadcasts. Are you focusing on the game or are you waiting for quips from the two quarterbacks? It’s hard to do both. ESPN will have to be a bit more clever to merge the productions so that game and the siblings have a better audio and video connection. The network might want to begin by dropping the insert of their faces so that the game itself is paramount. But I did love it when the alarm went off in Eli’s place.

Love Spero Dedes but his pairing with Jay Feely is not a marriage made in heaven. Feely yacks incessantly and generally says nothing. What’s more troubling is, there were at least 25 times in one half alone where Jay steps all over Dedes. He has to let Dedes lead. He did the same with Tom McCarthy last season. Otherwise, this could be disastrous.

This will be the last season that the Joe Buck and Troy Aikman team will do Thursday nights. Next season Amazon’s Prime channel will have exclusive rights.

Brandon Gaudin gets his first game Sunday for Fox. Odd situation. This might be the first time ever that a Buffalo-Miami game will be on Fox. And a warm welcome back to the NFL to Matt Millen. He’s struggled through medical issues, including a heart replacement. In Fox’ early years, Matt was #2 on the analyst depth chart.

New England-New York Jets could be a dandy with Kevin Harlan and Trent Green presiding.

Adam Amin, the one time ESPNer is moving comfortably along. He’s now #3 on Fox’ depth chart. On the other hand, his boothmate, Mark Schlereth lags. His comments are shallow.

Anyone need an NFL alarm clock? Gus Johnson is back with Minnesota-Arizona. The few times I heard him last season, I like his partner, Aqib Talib.

With Buck’s team off on Sunday, the trio of Kevin Burkhardt, Greg Olsen and Pam Oliver get Fox’ number one game, Atlanta-Tampa Bay.

63 Million subscribers through 100% of the country

12%/40 stations -Much of Southeast and Carolinas

10%/27 stations Chicago, Cincinnati and a mix of the Midwest

Strong mix through country, except MT, Texas and Ohio

75 million subscribers across US

Former NFL player/analyst Tim Green has another book out while also dealing with ALS since 2018. He was a very good, literate analyst and is missed.