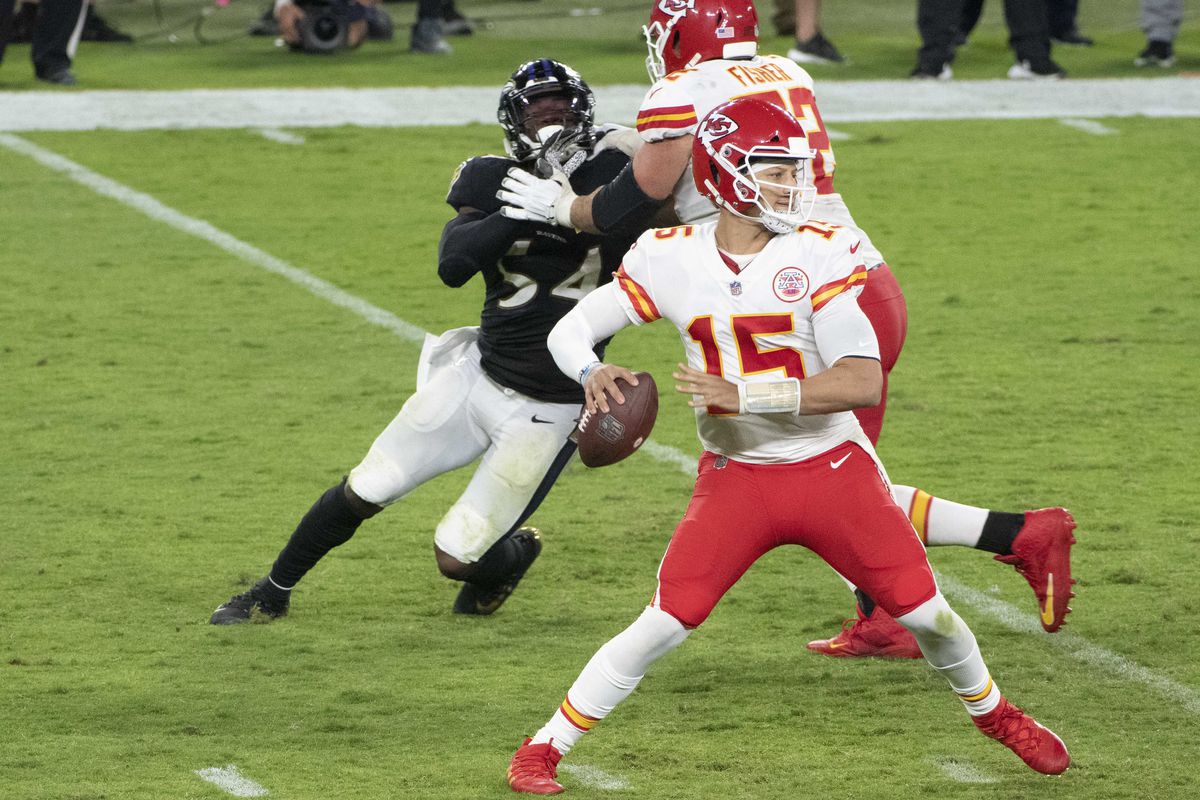 Patrick Mahomes and the Super Bowl champ Chiefs were scheduled to host the Patriots Sunday on CBS. The game was postponed and will be played Monday night at 7:05 ET. It will run across the entire CBS Network.

CBS has the doubleheader this week and Fox the single game.

Covid-19 forced two postponements this week, Tennessee-Pittsburgh and then New England-Kansas City game. It will run on the entire CBS Network, Monday at 7:05 p.m.

The Indianapolis at Chicago game was moved to the late slot at 4:25p.m. from the early slot at 1:00 p.m. This give CBS two games in the late window.

Fox is not as badly affected by the cancellations, although it had some changes too.

So based on these developments, CBS will run three games at 1 p.m.

Al Michaels returns Sunday night for NBC. The Voice of NFL Primetime works the next eight NBC telecasts. The review of the Tirico-Collinsworth telecast this past Sunday is here:

How did they do? Cris Collinsworth and Mike Tirico on NBC’s Sunday Night Football, Packers-Saints

Joe Buck and Troy Aikman worked the Thursday night game and are off on Sunday. Buck will be splitting time between baseball and football as MLB’s post-season intensifies.

Sports Media Watch reports that “NFL viewership hit Week #3 highs both overall and on Monday night, but the weekend was nonetheless a mixed bag.” Fox which had Dallas-Seattle and Tampa Bay (Brady)-Denver averaged 25.8 million viewers. SMW says that Fox’ Week #3 ratings were its highest in six years. But according to SMW, CBS’ ratings were down 9% in TV households. Yet when factoring in out-of-home (digital), the NFL rating was up 1%.

Monday Night Football on ESPN, featuring KC and Baltimore did an 8.1 rating, the network’s largest Week #3 rating in eight years.

Tom McCarthy, the capable Phillies announcer and occasional CBS play-by-player, has Jacksonville at Cincinnati. Jay Feely, the 44 year old former placekicker, comes up from his usual sideline post to team with McCarthy.

CBS’ Andrew Catalon, who’s comfortable at football, hoops and golf, does a solid and understated job. Partner James Lofton, 64, the former wide receiver and Hall of Famer, doesn’t hold back and has a quick wit.

Fox newcomer Adam Amin has the Giants at Rams. It will go to the nation’s two largest markets, New York and Los Angeles.

CBS’ number one team, Jim Nantz and Tony Romo, had the headline game, New England at Kansas City, WHICH NOW RUNS AT 7:05 TOMORROW ON THE ENTIRE CBS NETWORK.

Kevin Harlan was assigned the postponed Tennessee-Pittsburgh game. He’ll now do national radio Monday in Green Bay. Kevin’s father Bob Harlan, 84, is retired. He was the president of the Packers. Bob worked for the club from 1971 through 2008, 37 years. He became the president in 1989.

ESPN’s Louis Riddick is well prepared and quite knowledgeable but does talk a bit much. Play-by-player Steve Levy is a good traffic cop, giving both Riddick and Brian Griese enough runway. Bookkeeping is up to the ESPN’s producer to enforce. The best rule for the voices to follow is to talk sparingly and in measured intervals. In a three man booth, it’s tough to police.

Most of the local radio broadcasters are calling their games remotely. It’s requiring an adjustment. Some are wondering whether working remotely will continue in the future, once Covid-19 is behind us.

Largest geographical coverage for Fox Sunday is Cleveland at Dallas at 34%. That’s a 1:00 p.m. game.

Nice to see Spero Dedes get the late Buffalo-Vegas game. With the headline KC-NE game postponed, it will go to 75% of America.

THIS GAME WAS POSTPONED ON SATURDAY AND WILL BE PLAYED AT 7:05 P.M MONDAY ON ENTIRE CBS NETWORK