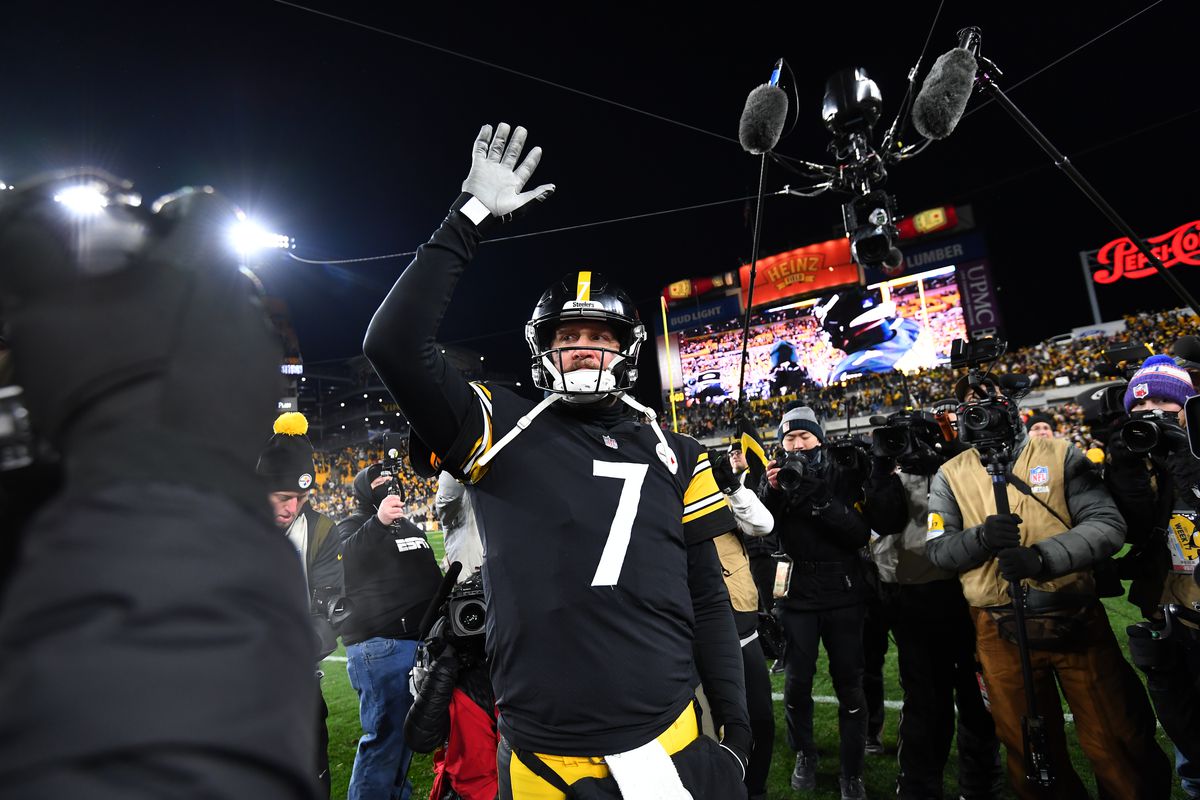 Big Ben leads the Steelers to the NFL playoffs

There was a time when there were only limited television outlets – like before cable. It was also before visible media critics, perhaps because there were fewer announcers. Media critics didn’t abound then, not in the nascent years of network television, the 1960s or most of the 70s.

Still, guys like Mel Allen, Curt Gowdy, Ray Scott, Vin Scully, Chris Schenkel and Lindsey Nelson, beginning in the 1950s, were known nationwide, because there weren’t very many others. The aforementioned served as role models for the next generation. Think Gowdy for Al Michaels, Scott for Pat Summerall or Allen for Criqui. And goodness knows how many for Scully.

Yesterday, in a world overfilled with microphones, voices and opinions, Jim Nantz was the subject of conversation, splashing headlines all over the U.S. because he was hit with Covid. Let’s hope Jim is in fine fettle for the start of the playoffs next weekend.

CBS Sports and Nickelodeon’s special slime-filled presentation during the NFL’s Super Wild Card Weekend will feature the San Francisco 49ers taking on the Dallas Cowboys during the NFL Wild Card Game on Nickelodeon on Sunday, Jan. 16 at 4:30 p.m. (ET). The special presentation will air alongside CBS Sports’ broadcast of the game on The CBS Television Network, and is one of six games during Super Wild Card Weekend across Saturday, Sunday and Monday. (-Halberstam, Publisher)

And they came crashing to the finish line. Unless you were up real late Sunday Eastern Time, you had no idea what the playoff picture looks like. So be it. For the NFL, the 18th week couldn’t have worked out any better. Here are snippets we caught.

Channeling Jim Carrey: When analyzing the chances of either the Pittsburgh Steelers and the Baltimore Ravens clinching a playoff berth, Charles’ Davis proclaims that he has never heard the movie “Dumb and Dumber” quoted this much in one week, with “So you’re telling me there’s a chance” to describe their slim odds.

Koch Cannot: On a failed fake punt attempt by the Baltimore Ravens, Charles Davis noted that this was Ravens’ punter Sam Koch’s first incompletion in his career, throwing 7 for 7 prior to this attempt.

Playing with a Chip on His Shoulder: During an offensive drive by the Ravens, Ian Eagle detailed the unconventional journey to the NFL that quarterback Tyler Huntley took from playing at the University of Utah, not being invited to the combine, and not being drafted. He noted how Huntley often questioned if football was for him but being a part of the Ravens has given him a newfound love of the game, making for a feel-good story.

Focused on Bigger and Better Things: After Steelers defensive end T.J. Watt tied the single season sack record, Ian Eagle and Charles Davis discussed how when interviewing Watt before the game, he wanted nothing more than to not talk about the record.  Davis admired Watts’s ability to lock in on the team goal of winning today’s game and hoping for a playoff berth, making for a great team leader.

Ravens Playing It Safe: After a big play for the Pittsburgh Steelers is called back after a facemask penalty which created a 49-yard difference in progress, Charles Davis accurately breaks down the reasoning for the Ravens playing deep zone coverage – to prevent the big play and keep the ball in front. This strategy forced the Steelers to punt, giving the Ravens the chance to extend the lead.

Classic AFC North Action: In this 56th meeting between the Steelers and Ravens, Ian Eagle observed how this game feels like an old school matchup, consistent with the rivalry, focused on defense and discipline.  With only one touchdown scored in the game, Eagle and Davis anticipate this going down as a classic game between these two teams.

Huntley or Jackson?: In the two-minute drill for the Ravens, quarterback Tyler Huntley avoids the pressure and rushes for a first down. This play leaves Charles Davis stunned, asking if there’s a number 8 under his jersey, implying that Huntley is playing amazingly like starting quarterback Lamar Jackson.

Not the Last Steel Curtain Call: As the overtime clock winds down and the Steelers approach field goal range, Ian Eagle and Charles Davis reflect on the legendary 18-year career of Steelers’ quarterback Ben Roethlisberger on what might be his last game.  As kicker Chris Boswell nails a game winning field goal, the broadcast crew now anticipates one last Big Ben playoff run.

There will be four divisional-round games, two on Saturday, Jan. 22, and two on Sunday, Jan. 23. Game times to come at a later date. What we know so far:

A Change of Pace for the Rams: On an offensive drive by the Rams where an aerial attack led by quarterback Matthew Stafford, Troy Aikman analyzed how what has plagued the Rams all season had been over relying on Stafford and not using the run game enough.  Following that play, Stafford threw two nice passes to catapult the Rams into the red zone.

Akers the Game Breaker: Buck and Aikman note that this is the season debut of Rams running back Cam Akers who tore his achilles before the season began.  Aikman believed he was going to play a major role in the Rams’ offense, taking the lead role of lead back off an impressive rookie season last year.

Higbee Not Hobbling Anymore: After catching a pass earlier in the drive, Rams tight end Tyler Higbee hobbled off the field seemingly injuring his back.  Higbee then returned to the game in electric fashion, catching the first touchdown of the game, giving the Rams a 10-0 lead.  Aikman then jokingly asked Buck if he was hobbling earlier, continuing the banter between the broadcast partners.

Taking a Lesson from Brees: Tom Rinaldi reported from the sideline that since 49ers quarterback Jimmy Garoppolo has been dealing with a lingering thumb injury that might require offseason surgery, he and his trainers had taken the advice of future hall of famer Drew Brees on how to manage the injury with few limitations to keep their season alive.  This all comes with rookie first round pick Trey Lance knocking on the door, potentially taking the 49ers’ starting quarterback job next season.

Watching TV: The Fox broadcast showed 49ers’ General Manager John Lynch in a suite trying to focus his attention on his own team, but is caught numerous times peaking at the TV monitor showing the Saints vs. Falcons game.  While that game has playoff implications for the 49ers, Buck and Aikman cannot help but laugh, yet still understand the high tension in these games.

Deebo Deep Ball: On a methodical offensive drive for the 49ers with no passing attempts, they fool the Rams’ defense in the red zone with a trick play where wide receiver Deebo Samuel threw a touchdown pass.  Aikman analyzed how they could not have set up the play better due to their trend of running the ball, giving lots of momentum to the Niners.

Slow Start Stafford: After an incompletion in the fourth quarter by Rams’ quarterback Matthew Stafford, Joe Buck noted that Stafford has had a difficult time coming out of the locker room, throwing 0 for 5 in the half with an interception.  Troy Aikman appreciated how the 49ers’ defense adjusted to the Rams’ passing offense, applying the pressure on Stafford to get them back in the game.

49ers Reserve a Spot in the Dance: On a deep shot downfield to Rams’ wide receiver Odell Beckham Jr, the pass is intercepted by cornerback Ambry Thomas.  The broadcast then shows 49ers’ general manager John Lynch jump down a few rows in his box and celebrate his team’s playoff berth.  Aikman analyzes how the Rams tried to get Beckham involved, however the deep throw was underthrown, allowing it to be picked off.

I was up “real late” to see what the final NFL playoff picture would be. Chargers-Raiders, quirk being that if the game ended in tie, both teams would make the playoffs and the Steelers would be eliminated. Good that both teams played to win at least. Listened to some of the second half Westwood One radio broadcast with Ryan Radke and Ross Tucker. While I was listening, neither hammered home the exact scenario, mostly saying nothing about it, other than occasionally saying “winner is in and loser goes home” which is accurate but does not crystallize the actual “tie” scenario.… Read more »