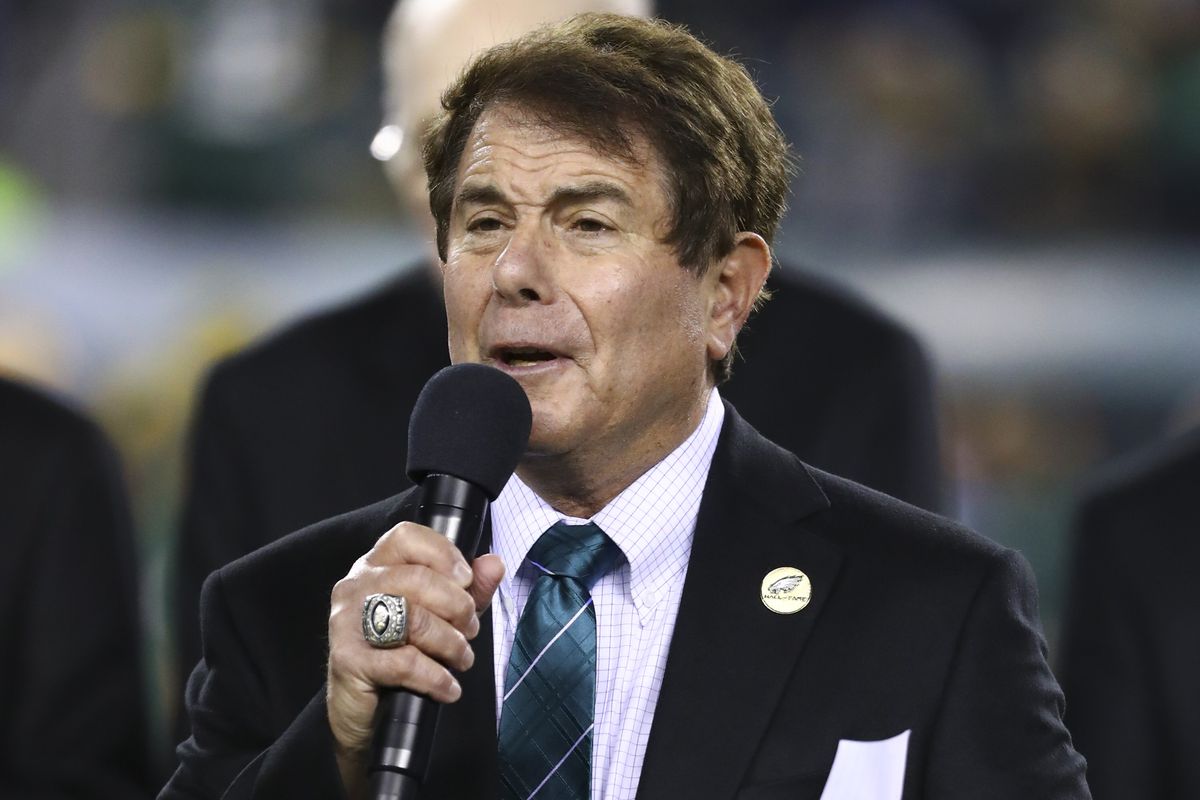 Merrill Reese begins his 46th season with the "Birds." Turns 80 in September. Still sharp as a tack.

It’s true. The NFL never takes a breather. Camps for that matter open next month. For veteran radio play-by-players, it’s the same routine and it begins again in July. And believe me they’re as pumped as they’re ever been to launch another season.

These are voices with the most seniority – doing play-by-play (in parenthesis, when he started and number of seasons in grade)

Merrill’s husky voice has presided over the broadcast of every Eagles’ game since late-season in ’77. That’s a long run. For a pro team in Philly, it’s a record. Merrill’s history with the “Birds,” as he occasionally fondly references them didn’t start out very well. It was born out of tragedy. His predecessor was Charlie Swift who was the club’s play-by-play announcer. On December 7, 1977 committed suicide with one shot to his head.

He recently signed a new three year contract with WIP. He told this to the station’s talk host, Angelo Cataldi, “I will never willingly retire — they will have to remove me with a crane, because this is what I love doing more than anything else in the world”

Had a parting of the way with owner Jerry Jones, during a three year interregnum, (36 seasons in service all). Brad told me he had to learn the finer points of the game when he first did color on radio under Verne Lundquist on KRLD. And indeed, added some material of substance before Verne went to the networks. Sham is a Chicagoan and Dallas legend, He also worked Texas Rangers Radio baseball with Eric Nadel and lots of college football and basketball.

Gene’s the best football broadcaster in the Sunshine State. He also did decades of FSU football and basketball statewide. What distinguishes Gene from so many voices is his ability to retain his on-air enthusiasm from start to finish. At the end of the last college seasons, he announced his retirement from Florida State. At age 77, he’s still the best. I often listen to him as I would a Chick Hearn or Marty Glickman, for the theater of it. Gene is very engaging. Thank goodness, he stays on as Voice of Tampa Bay Bucs. Never loses an iota of his devotion and passion.

Once a Pittsburgher always a Pittsburgher. As legend goes, Hillgrove was handpicked by owner Dan Rooney to call Steelers’ games when Jack Fleming left for Chicago and the Bulls. Bill was doing Pitt football and basketball. Since ’94, Billy, as broadcast partners have called him, has done both the college program and the city’s beloved Steelers.

Does hoops for ESPN too. With the advent of a championship-worthy team and Holthus’ gifted voice, Sundays in the heart of the Midwest belongs to the energetic Holthus. Despite Covid, Holthus has become quite popular in KC the last few years.

There’s rarely if ever any criticism of Papa, one of the many growing number of Fordham students to spawn from the Bronx based college and excel. He’s worked at ESPN and NFL Network and elsewhere. Best at golf. Perfect voice too for the sport. In football, you’ll always know where the ball is and the down and distance. Bob can be a bit dry though. He paints a nice picture but just doesn’t empty his lungs to stimulate listeners. Has a noted and repetitive routine.

Ex-player who has fashioned an unusual focus. In essence, he calls both the play and also adds analysis because of the depth of his understanding of the game. He’s 68 now and working for powerhouse KOA. Just a couple years ago, he signed a ten year renewal. As a game caller, he takes listeners into into the huddle more so than anyone other play-by-player.

One of the top to ever hit the Cleveland market. Well known and well liked, Descriptive, warm, authoritative voice, upbeat, honest and fans enjoy him. Jim is also a sports anchor on Channel 8 so he’s seen regularly on TV, whether it’s reports on runs by Cavs, new Guardians (formerly Indians) or even Ohio State. The Browns bolted for Baltimore in 1995. The NFL awarded the city a new franchise in 1999 when Jim began in booth.

Mr. Chicago in the day, Did Bulls, Bears and Cubs He now serves his childhood team, the team for which he rooted, the Packers. Right on top of every play. Redolent of Midwestern vocal enthusiasm, Wayne has also done years of college football on TV and national work on Westwood One Radio. Add his 12 years with the Bears and he’s been at in NFL for 34 seasons).

If someone can be more worshiped than Bill King, it says something. Papa is just about there in the Bay Area. He was forced out in Oakland after friction with ownership. the Buffalo native landed almost immediately across the Bay in San Francisco. Now there’s talk that Papa could replace Brent Musburger in Las Vegas. Papa has enormous talent Think for a moment that King could was almost as synonymous with the Raiders as John Madden. And Greg keeps rising in the eyes of the public.

Energetic, Mike gives it his all. Started at UT under the iconic John Ward, assisting with both football and basketball. First Titans’ voice ever and helped introduce the NFL game to Tennesseans. For that mater, in 1996, when Bud Adams announced that his club was leaving Houston, Keith began doing pre and post game shows of the then Houston Oilers and aired them through their future home on a regional Tennessee network. “Touchdown Titans!” is his wishful exclamation every Sunday .

A WBBM regular sports anchor on a powerful signal and highly rated radio station. Good listenership makes Jeff part of the community, his play-by-play resume is limited but Joniak supplements his play-by-play Bears’ coverage with year-round programming and events on both TV and radio.

(Jake Baskin assisted with this piece)

Nice work! I think it’s hard for anyone to achieve the level of regard that Bill King enjoyed because he was on all three major sports for a long time. Papa certainly has earned his spurs, though.