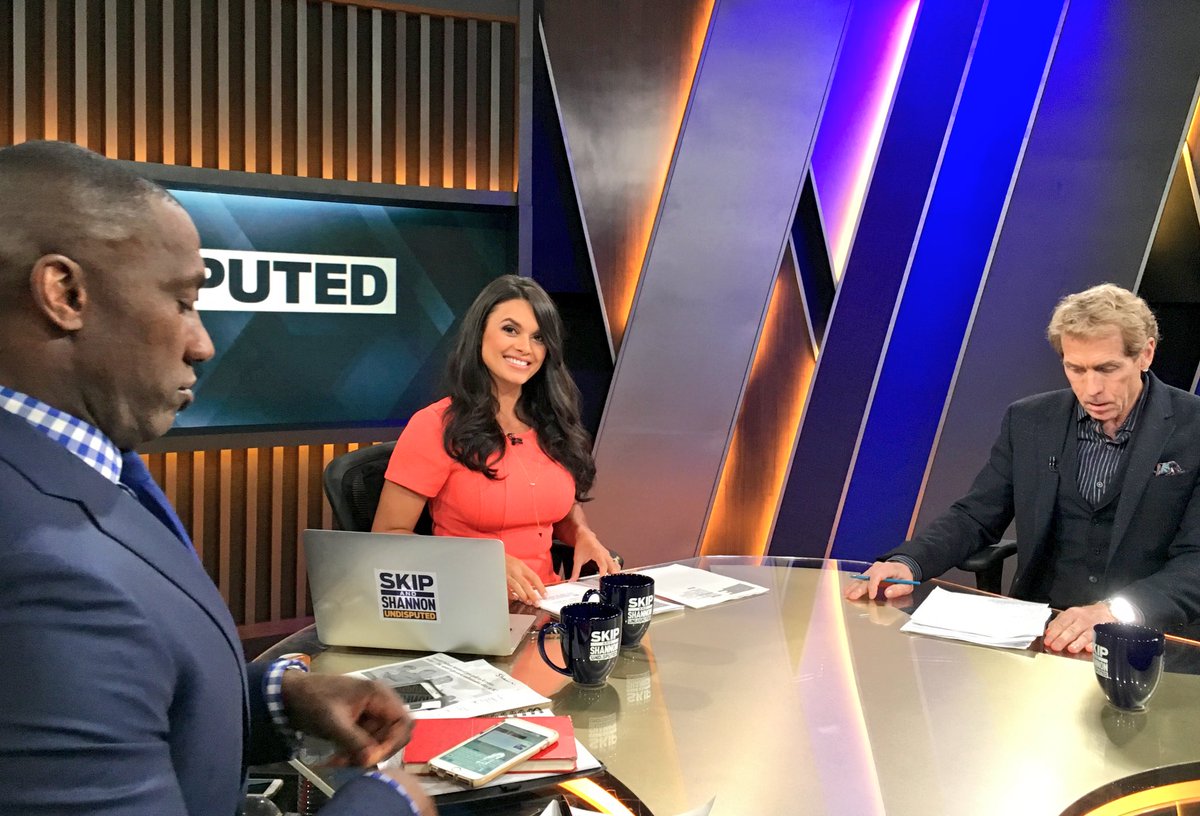 Shannon Sharpe, Joy Taylor and Skip Bayless on the set of Undisputed

The games have been tabled, schedules have been shelved, stadiums are empty and arenas are closed.

But that hasn’t stopped sports television’s opinion mongers. They seem to always find fodder to spur arguments over the actual and the hypothetical.

This is what I audited the last few days:

Lebron is by far the better player, ‘no discussion.[ Shannon says so while visibly surrounded by Lebron jerseys in his Beverly Hills’ home.

Skip: The rivalry began when Kawhi chose to skip Lebron’s basketball camp in ’08. Skip reinforces his argument that Kawhi is the better player based on his recent success, carrying Toronto to the NBA championship last season. He also references 2014, when Leonard beat LeBron’s Heat team to win the title.

Buccaneers GM Jason Licht told reporters earlier in the week that Tom Brady pitched himself to the Bucs. It wasn’t necessarily the other way around.

Shannon suggests that Brady studied film of the Bucs’ receivers (Mike Evans and Chris Godwin) and determined that Tampa would be the best destination for him. In addition, having an offensive coach such as Bruce Arians will be a change for Brady. The background of New England coach Bill Belichick is defense.

Skip highlights that this is another example of Brady controlling his own future and doing it in his own way. The Bucs were always at the top of his list, so Brady went after them before Tampa Bay had a chance to pursue him.

How will New England do this coming season?

Shannon believes that the Patriots will have at least 10 wins because Belichick is too good a coach not to produce double-digit wins.

Skip says that at best New England will finish the season at .500. He won’t be surprised if they are worse and cites that the Pats will have close to no offensive talent surrounding an unproven QB in Jarrett Stidham.

Who is the greatest college basketball player of all time?

Shannon elevates Kareem Abdul Jabbar to the top of the list. He cites his scoring, number of UCLA  championships and that he only lost one game in his entire college career. (Truth is he was 88-2 in college.)

Skip feels that Larry Bird is the greatest college player he ever watched, strongly suggesting that the rivalry between Magic Johnson and Bird helped propel college basketball into a major national sport. The two played against one another in the 1979 title game. Bayless points out too that Bird’s enormous accomplishment was at a small school, Indiana State, enhancing his accomplishments further.

The duo took suggestions on Twitter on what to debate.

Jay Williams joins the show and proposes that each NBA Conference get their own cruise ship, on which NBA players, personnel, and families would get on board after clearing COVID-19 testing. Once this has been accomplished, the rest of the NBA season would be played on these ships in isolation. The games would be broadcast to the world.

Max Kellerman likes the idea but thinks the cruise ships offer too many variables especially if something goes wrong and COVID-19 infiltrates the ship. Instead, he proposes a similar idea but in a remote location in the U.S. rather than on a cruiseliner.

Stephen A. Smith likes the idea but argues that fewer people be allowed on the ship, including no families. This too, he says, lowers the risk of the contagion entering the ship. (Anthony played early for the Nuggets. He’s never won an NBA title.)

Carmelo Anthony- could have – should have:

Williams addresses the claim made by Carmelo Anthony that he would have won at least two NBA championships had he been drafted by the Detroit Pistons. He thinks Carmelo would have, suggesting that the culture there would have benefited Anthony’s career. It would have made Carmelo better defensively as well as have suppressed his ego a bit.

Kellerman thinks that Carmelo would probably have won one more championship because Detroit was going to win in 2004 regardless. But he believes Carmelo would have been a terrible fit for Detroit defensively and it would have held back the Pistons.

Stephen A. thinks that Carmelo would have won at least one championship because of his offensive power and individual scoring abilities.

The team of Max Kellerman and Stephen A Smith debate the most underrated duos in the NBA:

Stephen A  selects Jimmy Butler and Bam Adebayo in Miami as the most underrated. Smith feels that these two are rarely given visibility by the media and not sufficiently praised for being a dynamic duo.

Kellerman has Luka Doncic and Kristaps Porzingis in Dallas as the most underrated. He believes that the Mavs would compete in the playoffs in a very difficult Western Conference. Max also suggests that Kristaps will be of MVP caliber once he fully regains his health. (Porzingis missed almost a season and a half with a torn ACL).

ESPN’s College Gameday host Reece Davis joins the show to address Kirk Herbstreit’s comments that he would be “Shocked if we have football this fall.”

Davis says that he is far more optimistic than Herbstreit. Reece says that there’s far too much unknown about the future to make such claims. He goes on to say that we don’t know how this virus will respond in the coming warmer months. The heat could offer some relief and hopefully football too. (The country’s lead adviser on infectious diseases, Dr. Tony Fauci did say that he expects an uptick in the virus this fall when the cooler weather hits the nation.)

Stephen A Smith agrees with Reece Davis and says that being pessimistic during these challenging times is not beneficial.

Kellerman agrees with Herbstreit, using information that he has gathered. He says that the earliest sports will be played again is in November and it might even be later than that.

Get Up, ESPN,  Mike Greenberg

Spring sport Division I athletes get an extra year of eligibility. Winter sports participants such as basketball players will not because almost all regular seasons games for these sports were played.

NFL Owners approve expansion of the playoffs to 14 teams. Only one team in each conference will have a bye week.

Adam Schefter reports from that the medical director of the NFLPA is  “very optimistic” that a full NFL season will be played.

The NFL draft will continue as scheduled. Roger Goodell issues a warning to teams that they should not criticize this decision. Mike Greenberg says he would be surprised if any team would suggest otherwise because there’s nothing to gain from criticizing the commissioner on this matter.