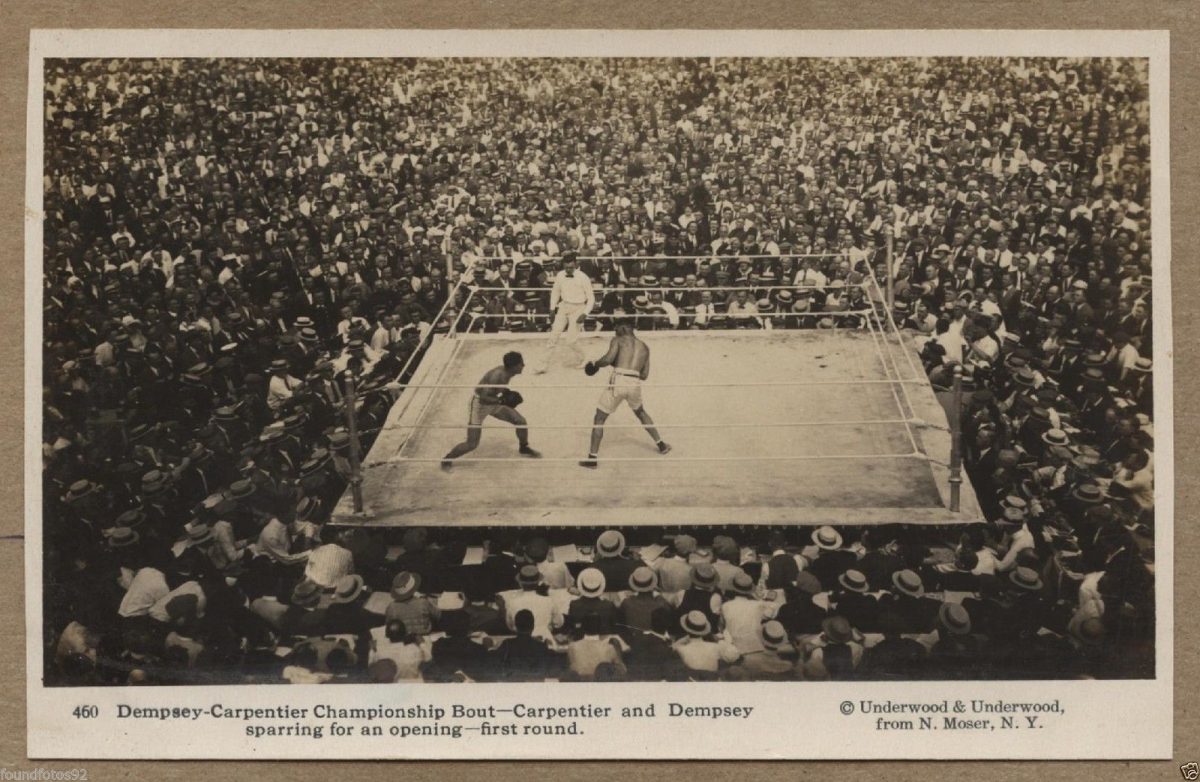 The 1921 heavyweight championship fight held on July 2, 1921 spawned radio and its golden years

Employing ship to shore technology, Radio Corporation of America, in cooperation with other corporate and governmental entities, produced experimental coverage of the Georges Carpentier-Jack Dempsey heavyweight title fight. The match was held in a makeshift open field in Jersey City, across the Hudson River, just miles from Manhattan.

Boxing then was as big as it got, so big that the New York Times would often headline its heavyweight fight-night coverage in bold lettering, across three lines at the top fold of the front page.

RCA’s motive was to stimulate sales for what were then called radio boxes, essentially audio receivers which the company manufactured. These radio boxes were expensive even by today’s standard and not in widespread use. As such, the great fight was a unique and powerful sampling opportunity. RCA felt that if the experiment was successful it would build consumer demand for receivers. But with so few of these radio boxes in the marketplace, how would the public listen to the huge fight?

David Sarnoff, RCA’s General Manager and iconic radio pioneer, thought somewhat out of the box. An agreement was reached with mogul Marcus Loew to install receivers in the many theaters he owned in the Northeast. In other words, for Sarnoff and RCA, it was an opportunity to attract a broader listener base to sample radio inside Loew’s Theaters. The hope was that fight fans would appreciate radio for its ability to disperse immediate information.

J. Andrew White was put in charge of the project. He and RCA convinced the Lackawanna Railroad to make its radio tower available and the Navy to provide a transmitter.

The bet paid off. The experiment 98 years ago today was a smashing success and showcased radio for its indispensable value. It was estimated that some 300,000 people listened to the fight. White himself broadcast the heavyweight battle and remained active on-air for a couple years.

Consumption of radio receivers spiraled and big powerful radio stations were born. The rest, as they say, is history. While faced by continuing challenges today, radio enjoyed it golden years through the 40s, survived the advent of television and cable and is now in a fight for its financial life in the world of the internet and Smartphones.

So happy 98th to the medium of radio, spawned and made by popular by the big heavyweight championship fight of the day. Many happy returns.

Today, news broke that John Sterling, born seventeen years and two days after radio, would miss the Yankees broadcast this Thursday in St. Petersburg. The irrepressible announcer will suffer his first absence in some thirty years.

Thursday is July 4th which also so happens to be Sterling’s 81st birthday. Apparently, the exigency of the wearing schedule has taken its physical toll on John and he needs some time off. He says he’ll be back after the All-Star break, giving him a week off.

July 4th is also George Steinbrenner’s birthday. The boss would have been 89. It was Steinbrenner who allegedly told Sterling that he has a job with the club for life.

For streaks, Sterling doesn’t have to look far. Or you might not want to go there. But yes, there was Lou Gehrig and Wally Pipp. Go to Los Angeles and it’s apples vs. apples, if not by a measure of quality, certainly of quantity of seasons. There was Chick Hearn who left a Houston emergency room one day late, to make it to the arena to broadcast another Lakers game. Chick worked 36 years straight without a miss. Still, quite an enduring feat by Sterling, who first made his mark in New York, as a gruff sounding sports talkie in 1971.

What this does to John’s Yankee role long-term is hard to project. After losing a couple opportunities to call big home runs when he shared the play-by-play with Charley Steiner, he was determined to be assigned all nine innings, something difficult for someone even half his age to do.

Sterling might have won the battle but if he keeps at this pace, he’ll lose the war. There is one announcer older than Sterling. The redoubtable Bob Uecker is still at it, at 85. But unlike Sterling, Uecker essentially does just home games. He also gets some help from Jeff Levering on play-by-play. In Miami, Dave Van Horne turns 80 in August and he was forced into a shortened schedule this season.

Sterling eschews help. But for his sake and listeners, he needs it, for his health and to give fans a breather. One voice, on and on, is much. No one in the history of baseball called every inning until John started doing so. The greatest of all-time, Vin Scully, had Jerry Doggett all those years who did a couple innings a game. Mel Allen had two partners most years. Harry Caray had Jack Buck and others. Ernie Carwell had Paul Carey.

The Yankees broadcast crew has needed some surgery for years and now Sterling who might have insisted that he wants to call the entire game is toying with his health. Not good.

Ryan Ruocco, wet behind the years, will work the games John misses. He’s 32 and does some work for ESPN’s NBA broadcasts. He has filled in for Michael Kay on Yankees’ telecasts. Ruocco is a Fordham man and well-schooled by Bob Ahrens who ran WFUV, the school’s station, for years.

Baseball on radio is another animal. It’s a storyteller’s gig. Sterling, for all his lack of fundamentals, doesn’t overbear with numbers or scripted material. He broadcasts what he sees (or doesn’t see) but can occasionally weave in a memorable line that can make listeners chuckle. He spins yarns well when he doesn’t get distracted. John is also worldly, has broad interests and isn’t afraid to delve into them on-air. In other words, he’s unpredictable. So love him or hate him, you never know what you’ll hear.

Get well John. And as you take some time off, think this over, good and hard. Scale back a bit. You’ll remain where you want to be, the Yankees booth, a lot longer if you do.

John Sterling: The Yankee years – A lightning rod for criticism

I probably should not have omitted John when I wrote the following about baseball broadcasting being a story-tellers game: The Braves lost to the Cubs 9-7 today in what was one of the best games of the season and another Wrigley Field classic. It was made all the more enjoyable by listening to Pat Hughes (below) and Ron Coomer on the Cubs Sirius/XM feed. The satellite provider only delivers the home feed on radio and we were on the road most of the day. The Hughes-Coomer combo is almost a throwback to the days when radio broadcasters brought a lot… Read more »

I am a big fan of Hughes’s CD tributes to major league broadcasters, and his love for what he does and his belief in how it should be done are obvious from those. Thanks.