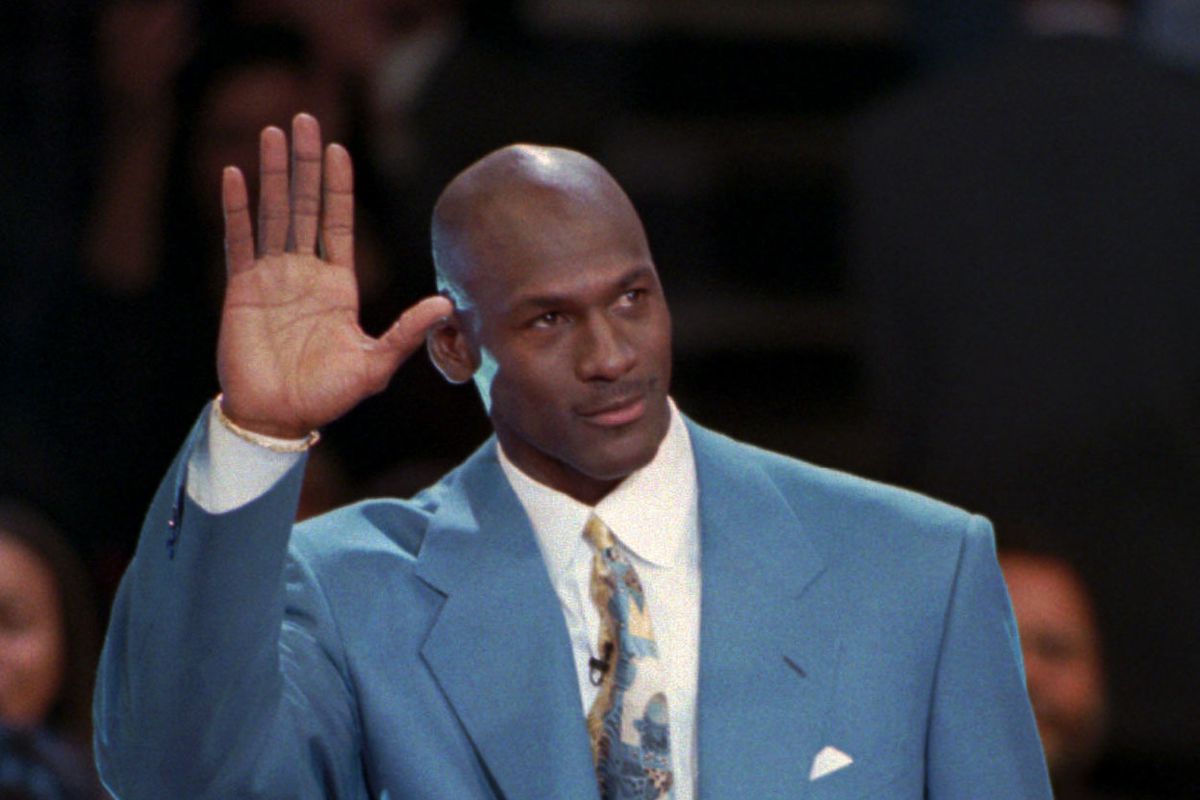 Michael Jordan's suits were not bought off the rack, not in his younger years either.

Sam Smith (left) wrote the book, literally. For that matter, he wrote three about Michael Jordan.

Smith covered the Bulls for the Chicago Tribune and authored the New York Times bestseller The Jordan Rules in 1992. The book gave the country an in-depth look at the star of stars who would go on to dominate the sports space in the 90s, a man who would become bigger than life, an icon whose mystique still intrigues America decades later.

Then Smith penned another title about Jordan and the Bulls, Second Coming: The Strange Odyssey of Michael Jordan – From Courtside to Home Plate and Back Again. In 2014, he made it a trio, There Is No Next: NBA Legends on the Legacy of Michael Jordan

There’s no one in America who consistently studied Jordan more than the Brooklyn born writer. He dug under multiple hoods to learn and glean every last detail of what makes Jordan, an irrepressible achiever, tick. So as we head into the final couple episodes of The Last Dance, which has been the highlight of spring sports programming, we asked the celebrated author to give us his read on the almighty Jordan and ESPN’s popular docuseries.

Well, there was more to it as Bryan put it three years ago: “The real Jordan, Smith found, was thornier, less smiley.”

Sam Smith was deservedly honored by the Basketball Hall of Fame in 2012 when he was given the Curt Gowdy Media Award in the writing category.

You wrote the ultimate book on Michael, The Jordan Rules. What’s your takeaway from The Last Dance? Was Jordan accurately portrayed?

I appreciate your comment. I felt Jordan was portrayed accurately because in the interviews he comes across as challenging, daring, upbeat, engaging, funny and comfortable, the traits we most saw in the 1980s when he came to the Bulls. Even as he could be intimidating, he was always wonderful company.

And until he became reclusive because of celebrity, success, controversies and riches, he was the most appealing to be around. You had to be alert around Jordan because there was always a challenge or something to defend. He made you think more. For some it probably was too much work, but he was the kind of person people wanted to be around, not only for the celebrity and spotlight, but the challenge.

Michael might offend some and some might not be up for that kind of verbal contest, but it was exhilarating if you were. Plus there was a deep humanity there as well, as we’ve seen on occasion. And few dealt with that level of celebrity better, especially early in his career. And he always understood his responsibility to the game and the fans and even amidst the din of the media and crowd, he was accommodating to the media as the only voice anyone really wanted to hear.

Michael had lots of say on the content of The Last Dance. Can you identify something unflattering that viewers might have missed?

I actually thought he addressed all the relevant issues even to the questions about being run out of the game and his father’s death. It showed how comfortable he is in his own skin, how little he does have to hide or perhaps regret and the confidence he has in himself off the court as well. Obviously missing was his family, which is not unflattering. Actually he and his first wife did a great job with his kids, though we never see them. From what I can gather, they’ve dealt with being the children of an icon better than almost any in that position.

When B.J. Armstrong was asked on the program whether Jordan was a nice guy, he paused and said no. B. J. professed that for Michael to be so successful and so strong-willed, it would be impossible for him to be nice too. So, is Michael a decent guy?

I actually felt he is a nice guy. Perhaps being from New York as I am, where people yell at you if you are too slow to order a pastrami sandwich, I’m more accustomed to that tenor of attitude. I’ve often described Jordan as a “man’s man,” which perhaps you are not supposed to say in this era. It just means the kind of guy you hang around with, in what they now call a man cave, play cards, have drinks, tell dirty jokes, smoke cigars, sort of an extended fraternity night.

Guys who are not nice are criminals, which he is not. I felt at times people missed the elements of where Jordan was versus his teammates, which led to much of his reputation with teammates. He was a young veteran with the Bulls sort of rebuilding into the late 80s by first drafting Pippen and Grant in 1987 when he wants to already challenge Bird and Magic. Then he returns in 1995 when other than Pippen it’s an entirely new team of mostly rejects. He now has to drag them along again. So perhaps he could come across demanding and short, which he was at times. Nice guy is a relative term interpreted differently; you could see he was fun company for those around him. That seems enough good guy.

Today, times are different. Political correctness is expected and it’s pervasive. News erupts in a heartbeat over social media. In his day, Jordan made harsh demands of his teammates. He punched out Steve Kerr. To what degree would his reputation have been marred given today’s environment?

I don’t believe any. Those were fairly innocent events overall, a practice skirmish. This is a quantity news era, especially in sports, and not a quality news era.

People mostly read headlines and watch videos. Jordan would have mastered this era to a bigger effect because the media in this era is too busy tweeting and looking for the next hot take headline. Most of what Jordan was involved in, which was considered “negative,” probably wouldn’t even have come out in the media’s rush to expand the myth and have the next Jordan hot take.

And as accommodating as Jordan was, he would have been able to manipulate the information flow better than anyone. Jordan’s attractive personal nature and success would have made him an even bigger star now. Heck, all he’s doing is sitting around on TV talking with a cigar and a drink and he’s diminishing every sports figure in the nation. Imagine if he also was doing something.

Jerry Krause died and couldn’t have defended himself. He’s painted in many ways as the villain. How would you assess Krause?

Krause was a difficult person to get along with, probably the wrong personality to be the “face” of the franchise. He was a scout and a good one, but one whose philosophy was to operate in secrecy in a competitive environment. That is what many good scouts do. They’re not the same traits needed to publicly represent an organization.

In this era, Jerry would be the behind the scenes guy with some well dressed, coiffed Ivy League school guy being the GM for the media. Back then, teams couldn’t afford big front offices like today. Jerry had the misfortune of being relatively inarticulate and having to verbally fence with one of the most savvy media personalities in the world. Being unable to express yourself well shouldn’t be a crime. You didn’t win on or off the court if Michael Jordan was your opponent.

Do you feel Michael agreed to airing the series now because he might be hearing discussions about LeBron being the greatest ever?

There’s always someone who’s going to be the next. Someone after LeBron will be, also. There is No Next, which was my book title in 2014, and the 10-part documentary shows it.

Now was just the time for yet another great business decision, to introduce Michael Jordan to a new generation of sneaker and fashion consumers who have heard of him but didn’t know him. Another slam dunk.

What was your relationship with Jordan long-term after the first book was out in 1992?

Not much. Basically professional. He could have made me an issue and I wasn’t being the sympathetic figure, obviously. But while our give and take chats ended, he always answered my questions seriously and professionally. Which was all I was there for.

If you were starting a new team and have to pick one of the two, Michael or LeBron, who would it be?

You’re not serious, are you?