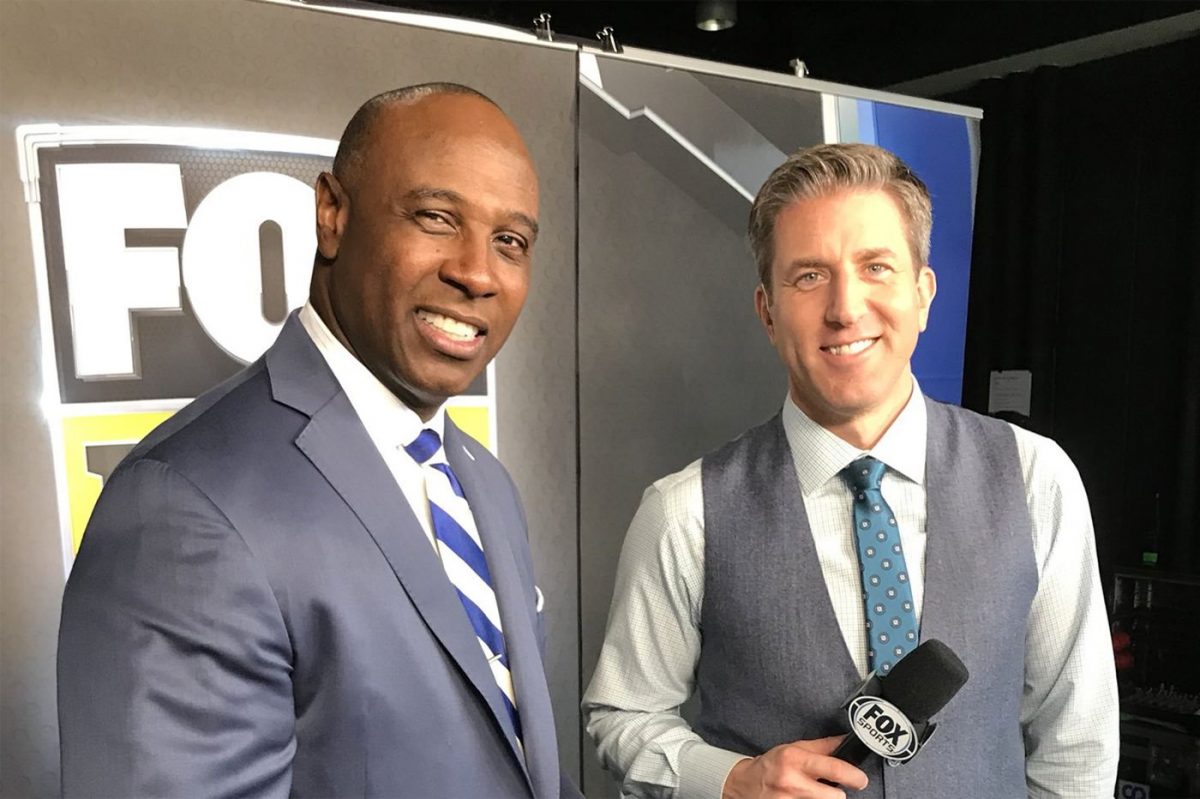 For Fox, it was their “B” team: Kevin Burkhardt doing play-by-play and Charles Davis the analysis. They may be Fox’s “B” but they were second to none.

Burkhardt was smooth and comfortable to have in our living room. Davis, who I guess is very underrated, made timely contributions without clogging up the broadcast with endless factoids. They didn’t try to fill every second of dead air like ESPN’s Monday Night trio does.

Burkhardt and Davis didn’t come at us with endless stats some broadcast associate was trying to impress a producer with. Instead, they let the game come to us, and then they told us the “what” and the “why” in the simplest of terms. Davis even referred to his playing  days at Tennessee for Johnny Majors, and was smart enough to explain to half of the audience too young to have heard of him, who Majors was.

Joe Buck and Troy Aikman are Fox’s “A” team. They worked the Rams-Cowboys game on Saturday night. As usual Buck got overexcited and Aikman had some good and not-so-good moments. John Madden used to say that during the course of a three-hour broadcast you’re going to say some good things, some mediocre things and a few not so good things, and that you just have to hope nobody remembers the latter. We did.

NBC’s Al Michaels and Cris Collinsworth have the give-and-go working to a “T” these days. As a team they’re smooth and they both work-in interesting stuff, but it never feels like there is a second to breath with these guys. Michaels says he’s never retiring, and now in his 70s, he is still at the top. One look at the field behind him and you realize he needs to stay on.

CBS’ Jim Nantz and Tony Romo had the worst game of the weekend with the Pats decimating the Chargers. Nantz sounds like he’s calling the back nine at Augusta National. The only thing missing are the whispers. Romo has been a good addition for CBS, but for gosh sake Tony, don’t wait until the game is half over to tell us that the Chargers are playing a zone defense, and that if they play a zone they have no chance whatsoever. That little tidbit belonged in your opening.

So we come back to Burkhardt and Davis. Two underrated broadcasters who let us enjoy the game. Just the way it should be. Thank you, gentlemen.

Editor’s notes: Looking ahead to next weekend’s games that will set up the Super Bowl matchup:

Next weekend’s NFC and AFC conference championship  is scheduled for Sunday January 20th. The early game begins at 3:05 and pits the Los Angeles Rams in New Orleans against the Saints. Fox will have it with Joe Buck and Troy Aikman. The late game has the New England Patriots in Kansas City against the Chiefs at 6:40. Jim Nantz and Tony Romo will be in the CBS booth.

The winners Sunday advance to the Super Bowl. From an historical perspective, this is last time these teams played in the Super Bowl:

Los Angeles Rams – The Rams have never won the Super Bowl as the Los Angeles Rams. They did play in the 1980 championship and lost to the Pittsburgh Steelers. As the St. Louis Rams, they won it in 2000 beating the Tennessee Titans and appeared again in 2002 but lost to the New England Patriots

Kansas City Chiefs – It’s been a while. The Chiefs played in the first Bowl  in 1967 and lost to Vince Lombardi’s juggernaut, the Green Bay Packers. They appeared again in 1970 and beat Minnesota. It’s been 49 years since the Chiefs advanced to the big game.

Bud Grant coached that Minnesota team in 1970. It was the first of four Super Bowls to which Grant led the Vikings. Minnesota lost all four. Grant is 91. (He also played in the NBA.)

Talking of  an infamous 0-4, Marv Levy coached the Buffalo Bills to four consecutive Super Bowl appearances beginning in 1991 and also lost all four games. Levy is  93.

The Halby’s: Fox and ESPN, from Buck and Tessitore to Aikman and Witten; 9 NFL crews critiqued

Bud Grant also played and coached in the Canadian Football League before Jim Finks hired him at Minnesota. Avid outdoorsman but scoffed at men wearing coyote and wolf skin coats or jackets, popular in some parts in the ’80’s.
Proud of the fact the Vikings were a “cold weather team” like his Winnipeg Blue Bombers in CFL. Only used indoor practice facility in Minnesota on the very coldest days. A great coach and person who deserved to win a Super Bowl.