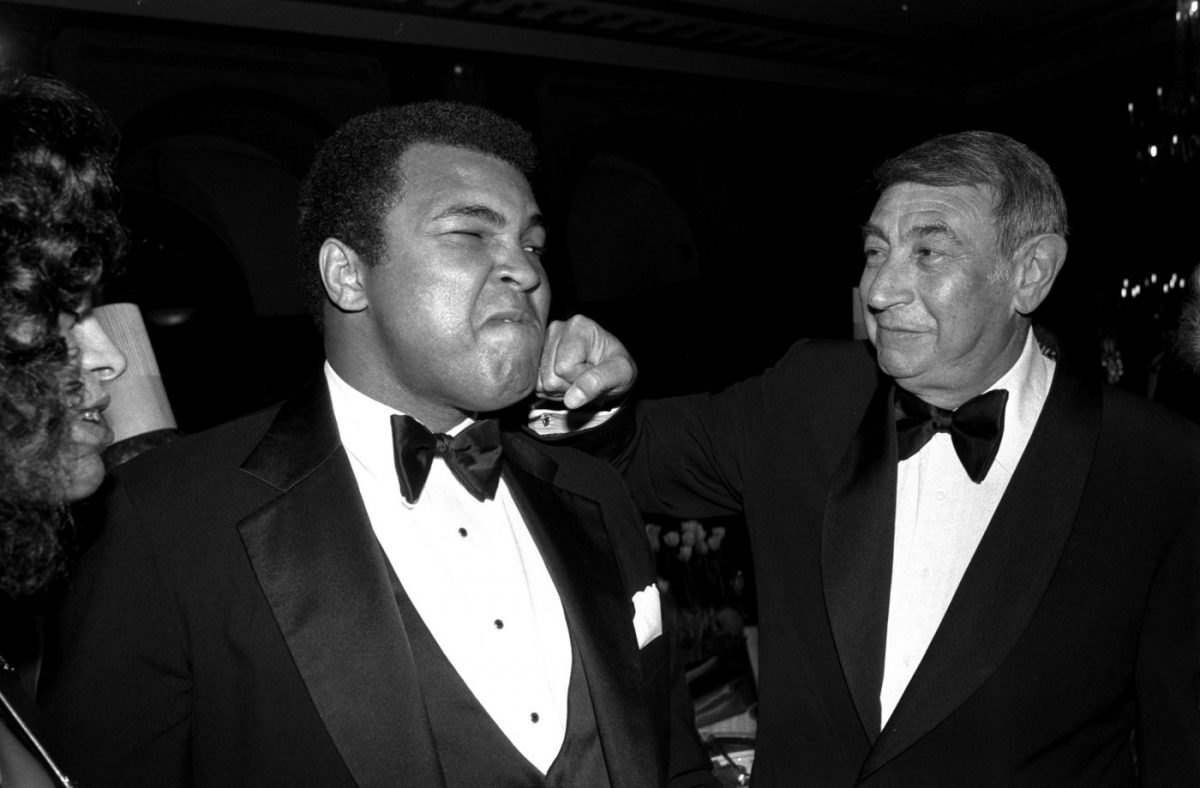 Whether it’s his sometimes giddy, always frank and generally pedestrian language or it’s his amazingly accurate predictions, Tony Romo of CBS has taken NFL fans by storm. In a short period of time, the former Cowboys quarterback has become a lionized television analyst who’s talked about in reverential terms. As the riveting AFC title game built to a crescendo, Romo sounded less like an analyst and more like a seer.

Longtime New York Giants fans might remember Al DeRogatis, who served as Marty Glickman’s sidekick on the team’s radio broadcasts in the 1960s. DeRo accurately predicted plays, “Marty, Tittle will likely throw to Del Shofner.” And of course Y.A. did.  (Al  was so good that NBC hired him and he worked three Super Bowls with Curt Gowdy.) But the 60s weren’t the 2010s and Giants’ coach Allie Sherman wasn’t Bill Belichick. It’s hardly imaginable today but back then, Glickman and DeRogatis were allowed to attend coaches meetings and team film sessions.

Through the history of sports on the networks, there have been other announcers who hit television thunderously. The majority of this group of ten got attention because they were either different, opinionated, pioneering, polarizing, bold or imposing personalities.

It wasn’t a matter of being smooth like Jim Nantz, elegant like Dick Enberg, instructive like Hubie Brown, erudite like Bob Costas, a poetic storyteller like Vin Scully, they were provocative. Listeners had opinions; these guys were either loved, hated or tolerated, often all at the same time.  Viewers either gushed over these personalities by some blessed unique ability they brought to the set or turned off  by them sufficiently to mute the volume.

Romo hit home with his neighborly warmth and an uncanny ability to figuratively take viewers down to the field; putting them inside the quarterback’s uniform.

These broadcasters were hardly cookie-cutter; they were all memorable. Romo for my money is the eleventh member of this unique group:

John Madden broke a pattern of network staidness. One has to dig deep to find a colorful and insightful  commentator before Madden. There were good ones;  guys like Bart Starr, Johnny Sauer, Wayne Walker, Johnny Unitas and Paul Christman. Yet Madden brought the sounds, the emotions and the lingo of the field to the airwaves, at a time that football was surpassing baseball as the national pastime. After subbing for a couple games in 1979, Madden worked on CBS with Vin Scully and Pat Summerall in 1980. He was so good, gregarious and animated that he was anointed to the number one color slot and soon became an American institution;  a former coach with a gruff voice and a lovable charm.

Howard Cosell was America’s first network television personality. He single-handedly popularized the NFL through ABC’s Monday Night Football with which he was clearly identified. He took up the cause of Mohammad Ali, challenged baseball to streamline its game and later eventually decried boxing. In a divided America of the 1960s and 70s, Cosell was the most polarizing personality in the history of network sports. Just as there will unlikely ever be another Vin Scully to call play-by-play, there will likely never be another Cosell. In his day, the monolithic over the air networks provided the perfect platform. Cosell had no real competition. Then and ever since, he’s had no equals.

Brent Musburger Edgy and brash, Musburger was opinionated and versatile whether stoking panelists on NFL Today at CBS in the 80s or challenging  his color commentators while calling play-by-play. His hyperbola irritated some viewers and enthusiastically engaged others. He saw lots of camera time and will always be remembered as the father of NFL studio programming. Brent was already a household name when ESPN was born in 1979. He was headstrong and stubborn . When he was fired by CBS on the eve of the 1990 NCAA basketball title game, it made backpage headlines across American tabloids .

Charles Barkley brought a stream of consciousness, zaniness and laughter to the NBA studio show. It’s  network sports best in-studio program because of  the man fondly called Chuck. He changed the entire presence of  the NBA on television. Ask fans to identify Turner’s NBA announcers, they’ll say Charles Barkley and perhaps Kenny Smith or Shaq. They won’t initially say Marv Albert. Barkley is a larger than life character.  He makes viewers smile after a long day of work. Who else does so frequently? Charles makes it okay to be human, even to err.

Dick Vitale was college basketball’s first network television personality. In ESPN’s formative years, he gave the network a unique identification. Vitale brought inspiration to the fledgling college telecasts. But his commentary strayed from the game quite a bit. Although he had a depth of understanding of the game’s finer points, he would often  pontificate about superfluous and scripted subjects. Still, he was a great cheerleader for college basketball. It’s no coincidence that hoops grew by leaps during Vitale’s heyday. There were those who found him annoying. Yet, Vitale was imitated and beloved by fans. He would be mobbed when he would walk into an arena. He was that popular.

Chris Berman , an ESPN original, was so dominant on the network’s NFL and MLB coverage that he became inextricably linked with both sports. At first, Berman was quite popular when many found his shtick funny. But after a couple decades, they tired of his same old lines. It seemed to many that highlights were tailored so that he can use his hackneyed signature lines. It was as though Berman ran out of material and never reinvented himself.

Bill Raftery broadened the nomenclature of basketball with phrases like onions and with the kiss. He brought an extensive knowledge of the game, a witty sense of humor and a good-natured warmth. When he started some 30 or so years ago, writer Norman Chad didn’t take to him immediately.  He wrote that Raftery ended sentences with “an avalanche of hysteria.”

Jim Gray was one of the first probing sideline reporters. He had celebrated verbal spats and controversial interviews with the likes of  Pete Rose and Dennis Rodman. Gray wore out his welcome at NBC before landing on radio. His irritating ESPN interview with LeBron James on the infamous “Decision,” shed poorly on Gray too. While quite a few found Gray overbearing, he did somewhat define the role of a non-passive sideline reporter.

Bill Walton is over-the-top. The former UCLA great says whatever comes to his mind, pertinent or impertinent. He seems to enjoy the attention the camera affords him. Some find him irreverent and humorous, others find him overbearing; a fellow who spews gibberish. The game itself that he’s covering sometimes becomes secondary to him.

Don Meredith, the former Dallas Cowboys quarterback, was the first analysts who was more of an entertainer, working games on ABC’s Monday Night Football. When the winner was decisively apparent, Meredith would break into song, “Turn out the lights, the party is over. They say that all good things must end.” I can’t imagine Moose Johnston suddenly beginning to croon. Then again, Moose will never be Don Meredith.

This is wonderful! An interesting point. Madden did a few games for CBS just after he retired, then spent a year with Gary Bender, who helped him along. According to Terry O’Neil’s book about his career, in which O’Neil rarely made an error, Van Gordon Sauter, then briefly building CBS Sports before going over to destroy CBS News, suggested Madden for #1, saying, “Never underestimate those beer commercials.” So in 1981, Madden moved up to #1, and Summerall and Scully got four-week auditions to be his main partner. Everybody at CBS Sports but Sauter wanted Summerall; O’Neil felt Scully was… Read more »

I would add Al McGuire to the list of irreverent color commentators. Fans will surely remember his anguished cry of”Oh Billy” when a flashy dunk shot (the type which McGuire loved) was treated with scorn by Billy Packer in the three person NBC NCAA basketball announcing team that included Dick Enberg on play by play. Always nattily dressed in his three piece suit and pocket watch chain, Al was a real character. DeRogatis was the best. I recall one play: “Marty, the Cowboys are defending the run and I think it would be a good time for the Giants to… Read more »