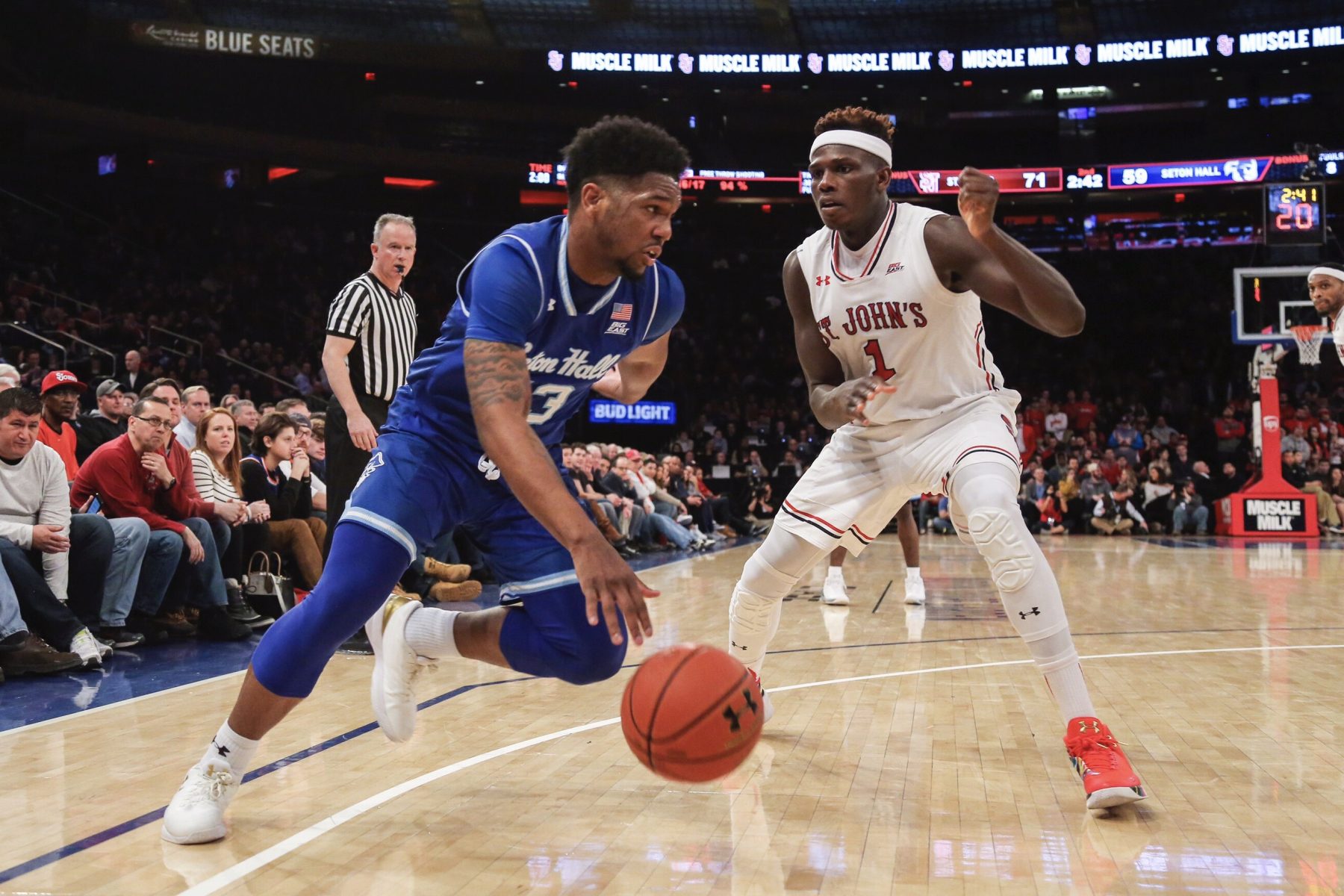 Basketball and more of it. Fans could have gorged themselves this past weekend like the Nathan’s winner does in the hot dog eating contest on July 4th.  Go to the SportsMix channel on DirecTV and the number of games available at any given moment is intoxicating.

It’s tough in too many cases to distinguish one announcer from the next. So let me add my two cents on what I experienced this past weekend.  Part #2:

It’s an unmistakable on-air timbre that heralds the presence of Tim Brando. He’s been around network telecasts for thirty plus years, is not afraid to express his opinions and uses signatures lines that tells viewers Brando is on the job; “The iron’s unkind” or “explodes to the tin!” With Tim, the utterance of each word is a musical note and he’s also not afraid to use strong words. When a soft inbounds pass was stolen, Brando said, “You can’t get lazy.” Elmore has always been solid. Viewers will always have takeaways, “Zones take cuts away” or “The Seton Hall zone is taking St. John’s out of its rhythm.” The Brando-Elmore team gets very high grades.

Rich did pre and post game work out west before arriving in South Florida where he called Marlins game. He’s an acquired taste. His style is one of a friendly companion but his sound is soft and sometimes painfully inaudible. In his years with the Marlins, he was eventually happily accepted among Miami area baseball fans after a tough baptism. Rich shared good human interest angles on the basketball telecast, including one on UCF’s 7’6″ Tacko Fall; although, while telling it, he was rudely interrupted by a thunderous blocked shot which got a rise from the crowd and unfortunately deflected viewer attention away from his story. When telling stories timing is everything. Just ask Vin Scully. Dickau was fine. He’s lived the ups and downs of the game; a Gonzaga star and later a six year NBA journeyman. Dan’s a man who has to work. At last count, he had half a dozen kids. The game was a blowout (UCF won 95-48) so my notes on Dickau read, “workable job, nonintrusive, said nothing memorable.” I don’t want to sound harsh but judge analysts by what viewers can learn from them.

Tom Hart has a big time sound to his call. He also has a relaxed voice. Hart picks up the speed of his delivery and slows it down seamlessly; a really sound play-by-play man. Dykes, while some might say is a bit corny, is a student of the game, an ex-coach and very knowledgeable. He points out the little things covering  strategy and execution. What I like is he’ll take a deep breath before he says something. Good comments are made after pregnant pauses. Too many analysts ramble and say little of relevance. Nice camera shot of Notre Dame’s legendary coach Digger Phelps wearing his familiar big smile. The announcers kidded, saying Digger was busy texting. Notre Dame basketball might not have as rich a heritage of the football program but Digger did take the Irish to their only Final Four.

Mitch is a football man, the longtime Voice of the Chiefs. Although he’s a radio guy, he didn’t over-talk on TV and engaged the ex-BC guard, Huckaby. Both guys talked up the Missouri Valley Conference and the unsung alumni of Southern Illinois’ past; Walt Frazier, Mike Glenn, Dick Garrett and Troy Hudson. Huckaby didn’t provide tons of depth. It sounded to me like he talked to the coaches, took some good notes and when a player did what the coach indicated was his asset, Huckaby pointed it out.

(Through all of this, I had a chance to watch ESPN’s studio group of Kevin Connors, Chris Spatola and Dalen Cuff, a trio that excelled. They broke down film quite well of Kansas-Texas A&M and Duke-North Carolina.)

For what it’s worth, Roxy’s brother-in-law is UC, Santa Barbara coach Joe Pasternack. Bernstein is very well schooled. He’s, focused, expresses himself cogently and an excellent football and basketball play-by-play announcer. His call is right out of the play-by-play textbook. He did radio of Cal basketball games and tried his hand on baseball with the Marlins. With a sepulchral voice, Caron sounds like a radio DJ. While he would occasionally break down plays or players, he rarely prepared viewers for what to expect next. Isn’t it what an analyst is hired to do?

Hassel has a solid voice and was in command of the microphone. He provided all you can ask. The duo covered a decent game won by the Redbirds 67-60. But the commentator, Marc Jackson, Temple’s Marc, not St. John’s Mark, left lots to be desired. His best line was, “His hands are like butter.”  Marc finished sentences with an avalanche of theatrics. Lots of style, little substance.

Dedes is one of my favorites. He’s ready, understated, confident, has a warm voice, a nice touch, captions the play and doesn’t overdo it. Spero doesn’t holler and he throws in a human element. Can’t ask for more. As I wrote during the NFL season, he deserves to move up CBS’ depth chart. All the accolades heaped on Raftery are still so  well deserved at age 75. He has a natural ability to dish one-liners and look twenty years younger on camera. He understands the game as well as anyone. In other words, he blends his strengths when behind the mic and is the star among all CBS’ basketball analysts. His usual partner, Jim Nantz smartly gives him his necessary runway. The intelligent Hill knows when to chime in and in recent seasons has played well off Raf.

The announcers can be first rate but they have to be given material and these two were. The Gophers and Knights started the matchup with hopes of making the Big Dance and the game was tight throughout. I always liked Wenzel. He’s fully transparent. Horowitz asked him about poor free throwers, “What can you do about it, coach,” he posed. Wenzel answered, “There’s nothing you can do about it quickly. You have to work on it in the off season.” I haven’t seen much of Horowitz. I’ve heard him do pre and post game shows on radio. His play-by-play is a work in progress. Jason should focus on the crispness of his delivery. He definitely is enthusiastic and knowledgeable.

Wise is a longtime student of the game and a bit of a spark-plug; very enthusiastic and is quite accurate.  Brown, 28, is a real up-and-comer! We extolled his work during the football season and he hasn’t disappointed on hoops. He uses his voice perfectly on each trip down the floor, punctuating every possession in lockstep with its outcome. Brown sounds to me like a blend of Tim Brando and Mike Emrick.

The Syracuse alum Pasch is a wonderful play-by-player. There’s little of his work about which to complain.  He’s a utility man in the sense that he can do college football, the NBA and college basketball for ESPN and the Arizona Cardinals on radio. His most difficult assignment though is to keep Bill Walton in-line; on some sort of short leash. The ex Bruin is a blend of a clown, an absent minded professor and a needy attention-getter. I’m sure there are those entertained by him, I’m not. His years of garrulous and extraneous commentary has already made up for his days as a recluse when he hid under Coach John Wooden’s raincoat.

Quis has a nice voice and did a good job of engaging Williams. The two brought up Rick Pitino which made my ears perk up. Current UNLV coach Marvin Menzies is under some fire and Pitino was linked to the potential job opening. Refreshing to hear some frank discussion about the subject.

Don’t know much about Rothman. He looked good on camera. He just didn’t sound like he worked with aplomb. Didn’t project very well. He looks young and I can’t imagine that he has a long play-by-play resume. Eric will improve by sheer reps. You have to admire Farnham’s fortitude. He was a walk-on at UCLA, earned a scholarship, graduated and became a young assistant coach at Pepperdine. He later turned to broadcasting.

Catalon keeps getting better and CBS keeps giving him more work. I enjoyed when the two brought in Gene Steratore on a close officiating call. You remember, Gene. Think NFL, AFC title game and Super Bowl, Gene is both a former NFL ref and NCAA hoops official.

Lappas can sound like a loose canon but he knows the game like the back of his hand. He emotes from start to finish. Lappas, the former Villanova and UMass coach, makes easy to understand points. One was “Every player on the floor should know which team has the possession arrow at all times. If so, when you’re the man with the ball and bottled up, you know if you should just force a jump ball.” Little things that anyone can understand.

This was tough to watch. First, Carey’s play-by-play command is weak. I couldn’t always hear him either. Second, because UConn’s 1999 championship team was honored and former coach Jim Calhoun was in-house, he was a guest on the telecast. Fine. But for how long? Goodness. While the threesome are gabbing away, the Huskies are rallying from well behind. It was distracting. The game unnecessarily turned into a superfluous talk show. Greenberg, a walking encyclopedia of the game as a whole and a student of strategy, is otherwise masterful in the studio. But as a game analyst, he  talked about so many things other than what was happening before the viewers’ eyes.

A weekend of college basketball on national TV: The announcers, part #1