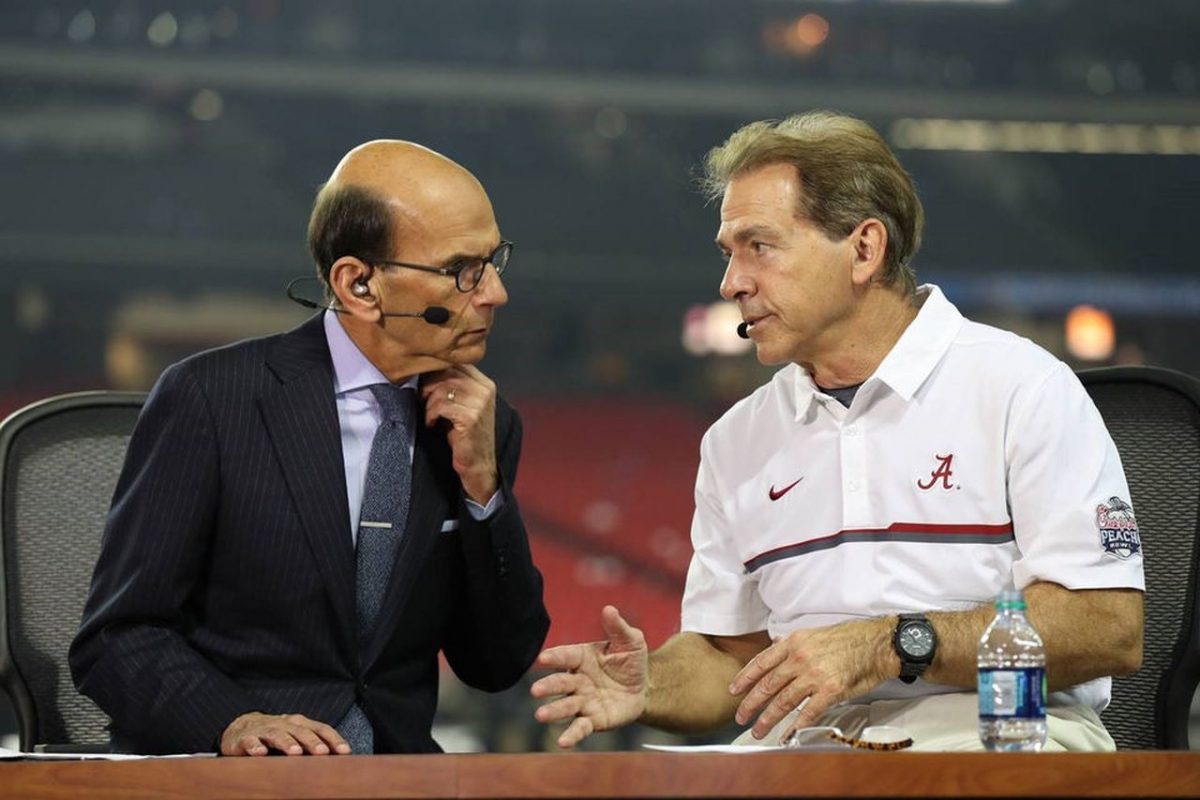 Raise the name Paul Finebaum in the Southeast and it’s likely to trigger thoughts of filled college football stadiums, ravenous fans and heated rivalries. From Texas A&M east and from Florida north, the invariable focus on autumn Saturdays is the gridiron. For those who grew up around the Southeast Conference, college football is a religion and part of a youngster’s baptism.

Finebaum was reared in Memphis, a son of newly transplanted New Yorkers. For his folks, Saturday in the south, wasn’t, as Finebaum once described it, a High Holy Day. To his parents, the SEC was more likely to translate into The Wolf of Wall Street, not the Iron Bowl. As such, it’s not as though his generational roots are deeply ingrained in the college game. But he got the bug.

He graduated from the University of Tennessee some forty years ago and pursued a career in sports writing. Not in his wildest imagination then did he foresee what was to come of his work. Today, he’s an unlikely rock star among college football aficionados and beyond.

As a reporter and columnist in Alabama, he broke unwritten rules, uttering the occasional unflattering opinion about the deified. He wasn’t the typical house beat writer. Paul asked tough questions and took deep dives. Some considered it blasphemous. For instance, he suggested that the worshiped Bear Bryant lost a grip on the Alabama program toward the end of his illustrious career.

He transformed his platform from writer with a mighty Alabama pen, into area radio host with an influential microphone.

When Ray Perkins labored as Alabama coach in the 80s, Finebaum did the unthinkable, he was critical of him on a radio show that he was hosting on the Tide’s flagship. It angered the Alabama administration sufficiently that Finebaum was forced to leave the station. It was he or the games. The games stayed and Finebaum left for a competitive station across the street.

Today, Finebaum works for ESPN and the SEC Network. His opinion counts nationally. This past summer the New York Post had Finebaum on its list of the top twenty most powerful people in college football, ahead of Herbie, ESPN’s Kirk Herbstreit. In fact, Paul was the highest ranked of any on-air or print journalist in America.

In an article Finebaum penned for Time Magazine last year, he drew a strong parallel about the fall game. “If college football is America’s lay religion,” he wrote in the lead, “the South is its ecumenically evangelical center.”

Sports Broadcast Journal spoke with Finebaum about his successful career and how his show has turned into the cynosure of the college football world.

Reflecting on your career, was there a flashpoint or an incident when you knew you made it?

The most significant moment occurred on Jan. 26, 2011. A man who called himself Al from Dadeville called and confessed to poisoning the iconic oak trees at Toomer’s Corner in Auburn. Three weeks later, when he was arrested – the trees later died – it became the biggest story in sports and has been linked to our program ever since. When I die, there is little doubt the obit will read – Paul Finebaum, who took the most famous call in sports radio history, died today.

You started as a writer, first in college at the University of Tennessee. Some thought of you then as part outlandish and part contrarian. At that point, you hadn’t yet settled on sports journalism as a career. True?

I had planned on being a lawyer until I caught the journalism bug midway through my college career. I became intoxicated with being a journalist. I didn’t have proper training but had a nose for news. I loved it. Years later, I ran into a local law school Dean at a party and he told me if I was still interested in law, he could make it happen. Finally, at 32, I was going to law school to become a lawyer. I told my fiancée, who had just finished med school and residency, and she said no way. She had enough of school. So I stuck to newspapers. We’re still married 29 years later so I would say it was a good bet.

If you’re number #1 in Alabama, is Eli Gold, the Voice of Alabama football, number #2? Has today’s galvanizing talk host surpassed the popularity of the play-by-play announcer?

I think Eli is probably a little more important than I am. His voice has been associated with so many great moments. He also gave me my first job in radio – and I will forever be in his debt. I do believe talk shows – with some exceptions – have more influence today because of television.

ESPN’s Joe Tessitore put you in some lofty company, comparing your interviewing effectiveness to, of all people, Howard Stern. Is it a disarming and/or an emollient quality that gets your subjects to let down their guards?

I think Stern is the best of all time. But what I have always tried to do as an interviewer is be extremely prepared but to also make sure the subject is comfortable and believes I care what he or she is saying. The most important thing in any interview is what the person has just said and not what the next question is. I think it helps me to have been a newspaper reporter where you try to glean information, often, in difficult circumstances.

You’re hardly the prototype, harsh sounding talk show host who berates others. You might say that your soft-spoken tone belies the impassioned timbre of intransigent callers. Do you ever lose it on-air?

Of course, anyone who sits behind a microphone is going to lose their cool. We’re human. But you try not let it happen often. The audience wants to believe you are in control and if you are always screaming and hollering, they will move on quickly. The most overused phrase in broadcasting is being authentic but it’s true. If the audience doesn’t believe in you, they won’t stay with you for long and that is a serious problem when you’re on four hours a day.

How do you keep your listeners engaged and entertained during college football’s off-season? Some might say you’re a one subject pony. Is it a fair assessment?

I believe the biggest challenge is the off-season. The season writes itself. But we go with the flow. We have spent weeks in February and March talking college basketball. I don’t have a specific agenda but more follow the hottest stories of the day. Certainly, I have heard the critics try and label me. And that’s fine. While I pay attention to what I said, it doesn’t really shape how I approach the program.

From what I can glean, your salary is reported to be $2 million, about $8 million less than what Stephen A. Smith is supposedly getting. Why is he getting five times what you do? Is he that much better or valuable? Is it a matter of limited geographic appeal?

First of all, in addition to Stephen A being a very close friend and someone I care deeply about, he is worth more than any other person in the industry. Nobody has the impact or the influence that he does. Stephen A. can talk about any subject with knowledge and expertise. I view greatness in any field – especially in broadcasting – as someone who is irreplaceable. I can’t think of anyone in this space that compares to him.

In your days as a scribe you broke stories. Terry Bowden’s firing at Auburn is an example of one. You did a piece on Buck Johnson of Alabama that caught people’s attention too. You can turn words with the best of them.  Referencing a competitive newspaper, you wrote, “The sports department of the Tuscaloosa News has the same relationship to the University of Alabama athletic department as Pravda does to the Communist Party of the Soviet Union.” Do you miss writing regularly?

I truly loved writing but I don’t miss doing it. It was the most difficult thing I’ve ever done and I truly respect sportswriters. But those days are over.

The Harvey Updyke episode brought him shame and you some fame, including big-stage interviews on national television. How do you assess your role in the poisoned oak trees at Toomer’s Corner?

I take some responsibility because I believe our show – especially at the time – often brought out the worst in fans as opposed to the best. Many did blame me. But while we may have provided a forum for people to spew attacks, I didn’t go to a store and buy 80DF and poison those trees. That was the work of a crazy unbalanced lunatic.

If you wouldn’t have focused on college football, what other journalistic or broadcast pursuits would have interested you?

I probably would’ve enjoyed being a political commentator. Growing up, I probably had much more interest in watching and studying politics. And if you promise not to tell anyone, not much has changed over my career.

Harrison Freuck is a School of Journalism and Mass Communication student at the University of Wisconsin-Madison. In addition to writing for the Sports Broadcast Journal, he works as the Sports Editor for the Badger Herald, where he also covers Wisconsin Badger football and basketball.