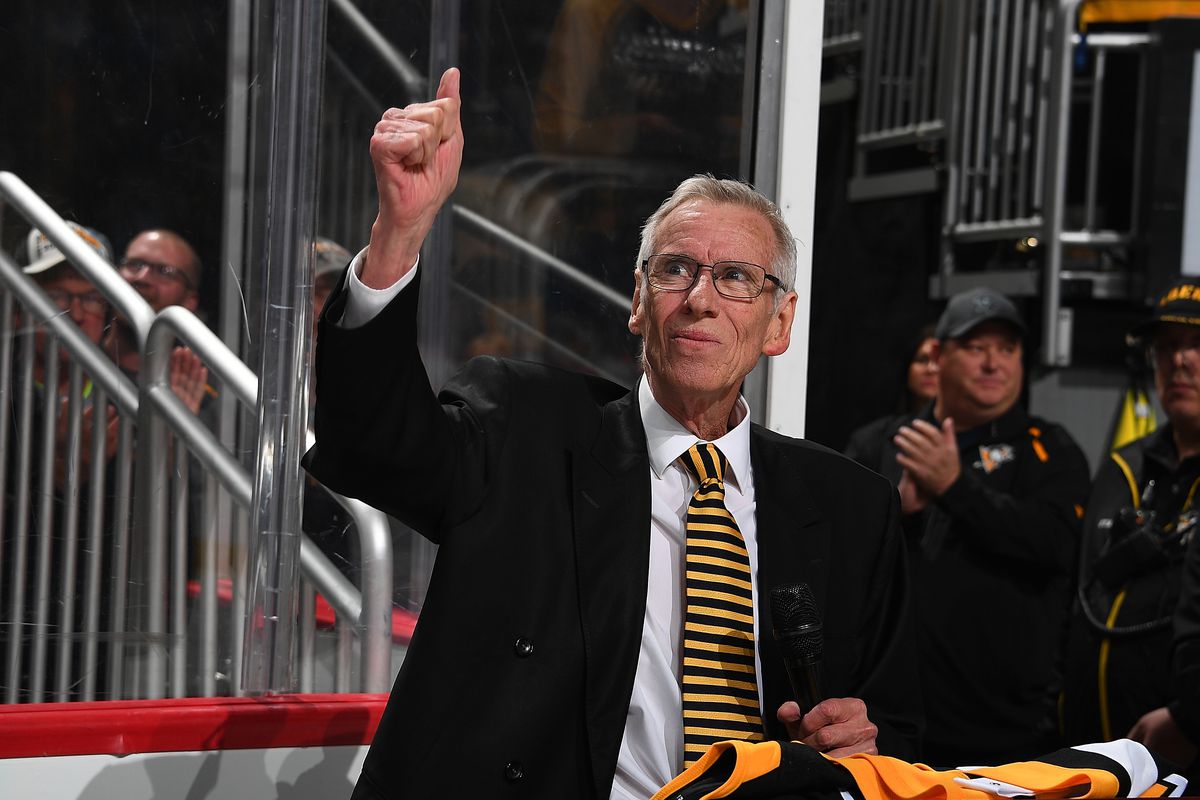 If Bob Prince was Baseball in Pittsburgh, Mike Lange was hockey. Cope spoke the Burgh and Rosey Rowswell made a show of his Bucs play-by-play.

Mike Lange – The longtime iconoclastic voice of the the Pittsburgh Penguins. Some of the other broadcast crazies in Western, P.A.

At the end of 2021 season, Mike Lange called it a career.

Among sportscasters, the Penguins’ community and those who assiduously follow the NHL, his name is well known. Mike Lange first called Pittsburgh’s hockey games in 1974. The season thereafter the club was in bankruptcy and could guarantee him no broadcast job. So he did soccer in Washington, DC (Diplomats) before the Penguins resurrected themselves in 1976.

At that point, he began doing a simulcast and the role continued popularly through 2006. Lange served as the lead play-by-play announcer for the Penguins’ radio and television simulcast. Mike never missed a broadcast. For whatever reason, he was dumped from TV, yet continued on radio through the end of 2020-21 season. It was then that he called it called it a career.

When asked during a one-hour television interview about his early influence of announcers. he identified Bill King who could do just about any sport and actually did in the Bay Area for almost half a century, particularly MLB, NBA and the NFL.

Raised out west, it is said that Lange fell in love with hockey as a student at Sacramento State. Apparently, a buddy convinced Mike to tail along with him to a hockey game while in college. Once seated, he immediately fell in love with the NHL. One thing led to another before he was announcing for the Phoenix Roadrunners and later the San Diego Gulls.

Al McCoy steered Mike a bit when Lange didn’t have more than a few bucks in his pocket. In the late 60s and early 70s, the NHL out west was limited to Los Angeles and the San Francisco area. McCoy was already well connected in the Valley and helped him get the minor league hockey gig that he gave up. Phoenix is still with the Suns fifty year later.  McCoy’s been with one NBA club longer than any other announcer has been with theirs. He’s also done minor league baseball with the Phoenix Giants and Arizona State football.

Pittsburgh has had its bunch of on-air characters in addition to Lange. During the Terry Bradshaw years, there was Myron Cope whose accent was redolent of Western Pennsylvania. He was a newspaper columnist and had a popular radio show. Cope popularized the Terrible Towel reminiscent of the 1975 and 1976 Steelers championships teams.

No Bucs’ fans will forget, “All we need is a bloop and a blast.” It is said that at the old Chase Hotel in St. Louis he was challenged by members of the media to dive into the pool from his room and he apparently did. One of his shtick too doing a game would be seeing him eat an apple and reading a book.

In the 40s through lots of the 50s, Rosey Rowswell called Pirates games. Born in the Midwest, Rosey too had a strange way of calling a home run: ‘Get outta the kitchen, Aunt Minnie, and open the window, here it comes,’ followed by the sound of smashing glass.

You mentioned Marv Albert–when I first heard him on Rangers radio in the late 1980s I was floored by how good he was, on top of things while still managing to insult Sal Messina along the way.

Pittsburgh seems to love its characters. Jim Healy in LA used to play a clip of Cope in response to some sports news: “Yoy, and double yoy!”