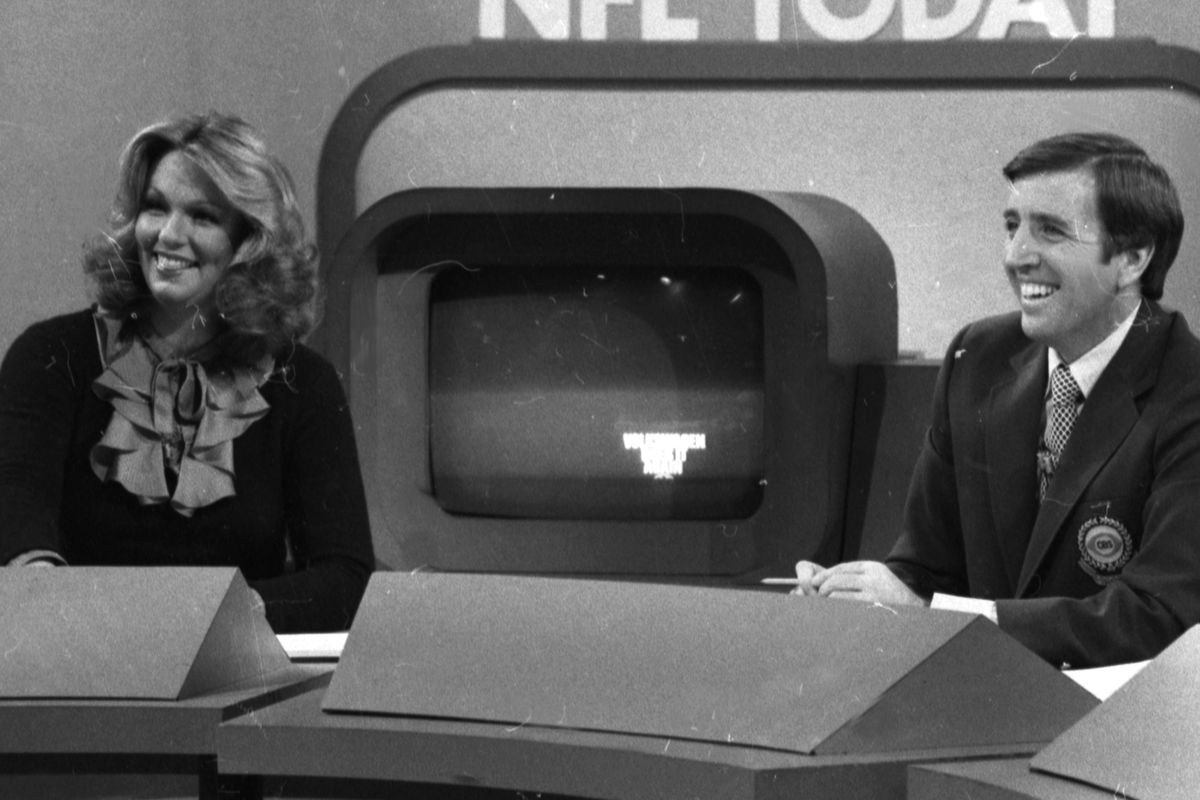 Phyllis George with Brent Musburger, circa 1977, on the NFL Today set. Mike Pearl was the show's producer from 1975-80. 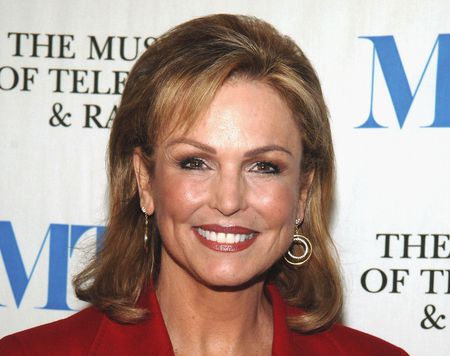 It was announced late yesterday that Phyllis George passed on Thursday night. She was 70 years old. A former Miss America, George was the first woman who was prominently and regularly visible on network sports telecasts.

In 1975 George joined the popular studio set of CBS Sports’ NFL Today. Her soft spoken demeanor belied the heated polemics of her cohorts, particularly Brent Musburger and Jimmy the Greek. Phyllis worked four Super Bowls on the sidelines or on pre and post game shows.

Her understated success didn’t open many immediate opportunities for women because at the time television was made up of only three on-air networks. There weren’t very many job openings.

On September 7, 1979 when ESPN tiptoed onto cable television, opportunities began to surface. With staffing requirements and an immediate need for on-air pros, women like Gayle Gardner could demonstrate their wares.

Phyllis George was the right person for her day.

Times were different in the 1970s. Yes, George was talented, yet she excelled because she didn’t make a to-do of herself. Had she done so, there could have been pushback.

Remember that when Phyllis was on the CBS set, Johnny Carson was the king of late night television. He and many other entertainers were still spewing what was then informally labeled acceptable ethnic jokes.

As Dr. Martin Luther King, Jr. said “The arc of the moral universe is long, but it bends toward justice.”

George is a heroine to many as evidenced by the comments we collected from many of broadcasting’s who’s who:

From those who worked with Phyllis in the trenches, on the set:

She had been ill for quite a while, two weeks ago making it through 14 hours of surgeries. She was a fighter, and I will miss her. The NFL Today was a terrific show largely because of her. I was blessed to be her friend and director. RIP Phyllis.

Phyllis was a  treasure. Her beauty, smile and kind demeanor lit up the screen. It was not always easy for her at the time, in a male dominated world, but she handled it all with grace and class. From our production team to the technicians who worked on The NFL Today, she will always be in our hearts.

Bob Wussler, president of CBS sports told me that Brent Musburger, Irv Cross and Phyllis will be your talent for the NFL Today beginning with the 1975-76 season. Phyllis was very nervous in the beginning but the further we got into the season the more confident she became. She realized that she didn’t have to pretend to know the x’s and o’s to be successful. She even found that she could occasionally partake in studio jabber.

We later realized what we had when we went on the road with Phyllis for the playoffs and the Super Bowl.When we were out having dinner, Phyllis was the one they kept asking for autographs.

Phyllis George was one of the nicest people you’d ever want to know. Everywhere the show traveled, the players were always asking, ‘Where’s Phyllis?’ Everyone loved her. And she couldn’t have been any kinder.

Thanksgiving Day, 1977, CBS had it’s usual early game and I asked my mother, a widow, to meet me at the studio so we could have dinner together after the game. My mother quietly sat in a corner knitting a sweater, but when the game was on, Phyllis came over, introduced herself and sat down and talked to my mom for 20 or 30 minutes. I actually got choked up when I came back into the studio and saw the two of them talking together.”

A piece of America just died. She was America’s sweetheart, and with her a piece our innocence died too.

The world lost a classy lady, and a marvelous broadcaster who broke barriers without the credit she truly deserved. When Phyllis hit the airwaves on Sundays, viewers changed times for attending mass and church services because they didn’t want to miss the NFL Today. She faced resistance that sadly even some women on television today understand, but it was worse for her because it wasn’t fashionable to fight back in those days.

She was a Beauty Queen a Miss America (and what’s really wrong with that?) but more serious female journalists were critical of her and didn’t like her for it. Even worse, there were men in television who cringed over her invading their space in sports. She dealt with petty jealousies with dignity and grace.

Phyllis delivered exactly what CBS boss Bob Wussler wanted for the NFL Today, a disarming personality, one who helped athletes of her time open up in ways they otherwise wouldn’t. In my years in Studio 43 for the College Football Today I worked with many who worked alongside her, and they all said the same thing. Phyllis George was class personified.

Phyllis was terrific. She was the standard bearer for all the women who have come to the fore in sports television. A Miss America who never acted like she was special. One of the nicest people you could ever meet.

George’s role as a sports broadcasting pioneer is well known, but less so is her role in Kentucky politics.

John Y Brown was already a legend as the founder of the Kentucky Fried Chicken restaurant chain and former owner of both the ABA’ s Kentucky Colonels and NBA’s Boston Celtics. But his marriage to Phyllis brought glamour and celebrity which he used in his run for Governor. In fact, on the campaign trail, many more would come to see Phyllis rather than John Y. Many think she was the reason he was elected.

As First Lady, she renovated the Governor’s Mansion and tirelessly promoted the Commonwealth.

Phyllis George will be remembered not only as Miss America, and as a ground breaking sports broadcaster, but also a key figure in the history of Kentucky politics.

I was young when Phyllis debuted. Yes, but by 8 years old, I was already watching NFL football by myself if no one else in the house was watching. The interesting thing though, is that I don’t really recall differentiating between being a man or woman on the show. I recall relating to Brent, as the main host and later Bob Costas (on NBC) as the main host. That’s the job I thought was cool.

It was really more about talking football than being on TV, which is how I still feel today. I just loved the sport. I tried out for Pee Wee at 8 because I just wanted to play.

I heard that once Phyllis stopped reading the negative letters and comments, she gained her true confidence. I NEVER look at social media. I never google myself, etc.

It’s unfortunately still a very negative world for woman in sports. I refuse to be exposed to the negative energy .

The CBS Sports family is deeply saddened by the passing of Phyllis George, an icon in the sports broadcasting industry who contributed greatly to the rich history and tradition of CBS Sports.  Phyllis was not only a key member of a show that remains the gold standard of NFL pregame shows, THE NFL TODAY with Brent, Irv and ‘The Greek,’ but also a pioneer for all women in broadcasting.

Bob Wussler hired Phyllis after meeting her at a party, and told us in the office the next morning that he had found “Brent Musburger’s partner.” We thought Bob was crazy.

Phyllis was really a shy person who was made into a potential performer by her year as Miss America (she played the piano). Mike Pearl and I shared an apartment on 56th Street and Phyllis lived upstairs from us, and she became like our little sister; always forgetting to get advances for her trips and needing a lot of information and encouragement about the big city and a tough business. Just a few weeks into her arrival on air at “The NFL Today” (Mike producing), People magazine wanted her on the cover and asked her to host a party at her apartment for the photo shoot – the problem was Phyllis only invited men to the party …..the reporter and photographer were very dismayed!

More importantly, Phyllis was a very sweet person and she carved out quite a life for herself…..a real Texas belle!

In her lovely, gentle way, Phyllis set the stage on The NFL Today for women to become important contributors in television sports. With Brent and Irv and two years later with Jimmy, Phyllis helped create an entire new genre of programming. But she will be forever remembered by her colleagues as a warm, happy and beautiful person. We will all miss her.

Being first is never easy and I’m sure the obstacles she had to overcome were too numerous to count. But the doors she opened for women are countless as well. For that, we all owe her our thanks. Football and sports in general were better because of Phyllis George. May she Rest In Peace.

Phyllis was the true pioneer for women in sports broadcasting. She was humble, respectful, and added a dimension not seen till her arrival. She gave young women the courage and determination to feel they could do the same. A trailblazer personified. Credit to Bob Wussler (then heading up CBS Sports)

I remember watching Phyllis George on the CBS pre-game show. I was young, but I recall my dad telling me about the significance of her role on the show. She had it all — grace, beauty, brains and the grit to endure the shots she was taking by those who believed she didn’t belong. I will never forget her and always consider her a pioneer. She left us way too soon.

Women in our business lost an icon, a genuine American treasure. I first met Phyllis in 1976, when I was covering the Patriots for the Boston Globe and she came to do a feature for CBS.  She was warm and sparkling, everyone was charmed. In later years, she’d invite me to her Kentucky Derby parties at Cave Hill, the enormous estate in Lexington where she lived with her husband Gov. John Y. Brown.  The party was nearly as exciting as the race – the guests included everyone from Barbara Walters to Kenny Rogers. Phyllis was successful at every turn – as Miss America, as a trailblazer, as First Lady of Kentucky. But beyond everything, she was most proud of her children, Pamela – a reporter at CNN, and her son Lincoln. We miss her already.

I met Phyllis George only once and it was brief, and way after her career ended. But i did make sure to thank her. While I was just born when she began her career at CBS she still had a huge impact on my career as she opened the door for women broadcasters and inspired so many of my role models along the way. She is truly the definition of a pioneer in our business.

Rich Podolsky contributed to this piece.