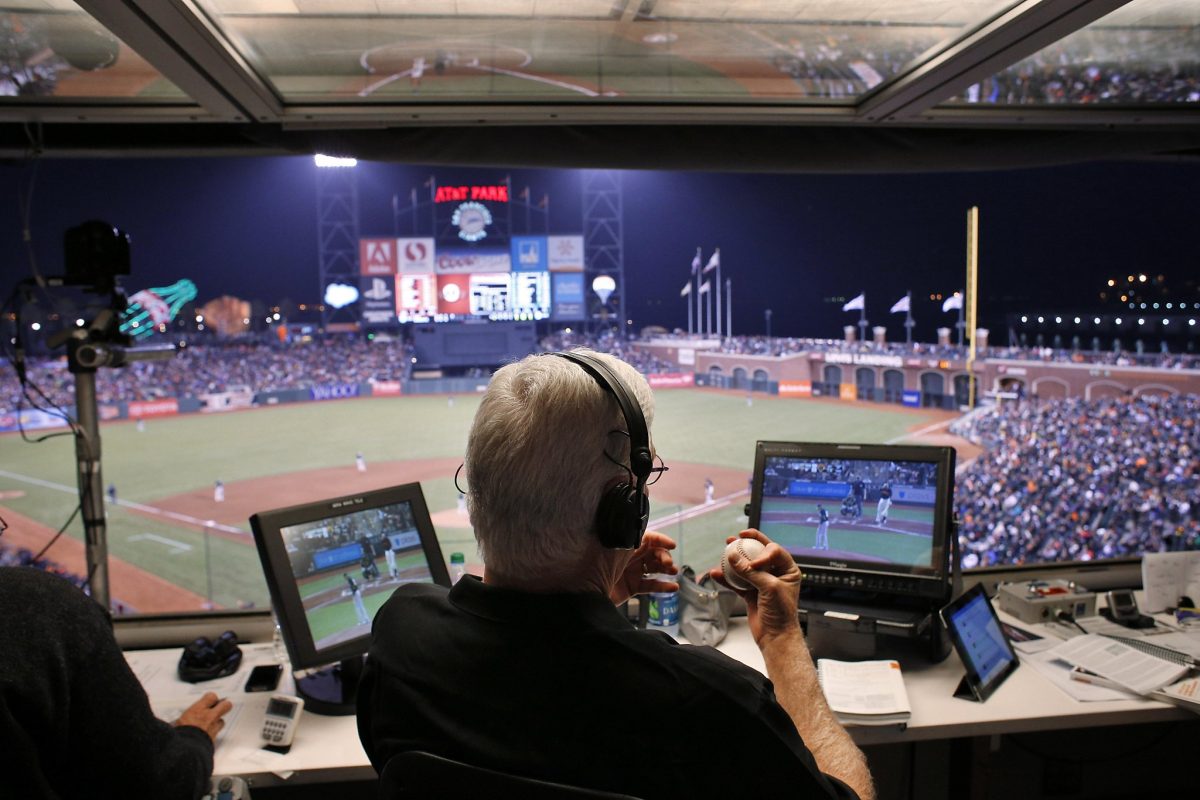 Baseball is back and with it comes encouragement. Harsh winters are behind us and long lazy summer days can’t be too far off. What would help are warm bodies at the ballpark. Plausibly, filled seats are also ahead of us in a matter of a few months.

For those who grew up with the game and remember when it was truly our national pastime, the announcers of the teams we followed were the voices of our youth.

For many it was radio, a medium perfect for baseball. It’s the easiest of the four major sports to picture while keeping an eye on the road. First and second and two outs are pretty easy to see through an announcer’s voice. And storytelling television broadcasters keep our attention between pitches

Baseball broadcasting is as different today as the game itself has become. Announcers take time off. All but a couple clubs have separate TV and radio crews. The are field reporters, studio shows and more, lots that we didn’t have years ago.

Worth noting at the top, because it seemed to fly under the radar, Tim McCarver no longer serves as an analyst on Cardinals games. After a prominent career as a broadcaster, nationally and locally, it seems that Tim, 80 in October, has retired. We wish him the best.

Jake Baskin, a young, budding and smart play-by-play voice, has a great appreciation for the history of sports broadcasting and has his finger on the pulse of today. He keeps tabs of who’s broadcasting where.

He prepared this year’s roster of baseball announcers for our readers. And believe me, unlike a generation ago, it’s not a scorecard anymore, it is a directory! Enjoy!

The list of this year’s baseball broadcasters follow some color on the teams that made broadcast changes in the off-season.

Atlanta: A report from Barrett Sports Media, confirmed by the Atlanta Journal Constitution on April 6th, indicates that the Braves will switch primary radio play-by-play announcers for the 2021 season. Ben Ingram, a former minor league announcer who has been the pre- and post-game host for a decade, will take over for Jim Powell. Ingram joined the regular broadcast rotation in 2019, doing secondary play-by-play for select games. Powell, once Bob Uecker’s partner in Milwaukee, will reportedly remain a part of the gameday coverage. In addition, Hall of Fame pitcher Don Sutton, a longtime member of the Braves’ broadcast team, died in January at the age of 75. Health concerns prevented Sutton from participating in the team’s radio coverage after 2018, but he was still officially a member of the crew until his passing.

Baltimore: Gary Thorne, after not appearing on Orioles television broadcasts in the 2020 season due to a contract dispute, is officially out, ending an association that started in 2007. Longtime Baltimore media personality, Scott Garceau, will once again handle the majority of games on TV, with talented 31-year-old ESPN multi-sport voice Kevin Brown calling select series on both TV and radio. The analyst chair was also rattled, with former Orioles’ players Mike Bordick and Brian Roberts taking roles with the team outside of broadcasting. Ex-Oriole pitching great Jim Palmer and Ben McDonald will split broadcasts.

Chicago Cubs: TV broadcaster Len Kasper made a shocking switch after 16 years with the team to return to his radio roots on the South Side of Chicago. The team searched for a big name to fill Kasper’s shoes, and they got one in ESPN’s Jon “Boog” Sciambi who will continue his work with the Worldwide Leader. Filling in for him will be Chris Myers, Beth Mowins, and radio voice Pat Hughes. Jim Deshaies remains the primary analyst, but he’ll occasionally be substituted for by ex-Cubs Ryan Dempster, Mark DeRosa, and Rick Sutcliffe.

Chicago White Sox: After a rights switch from WGN to ESPN Radio-affiliate WMVP, the Pale Hose swiped Len Kasper from the crosstown Cubs, and now have one of the most high-profile local broadcast teams in baseball on both TV and radio. Kasper succeeds WGN’s Andy Masur, who took the lead for the 2020 season following the untimely death of popular broadcaster and ex-pitcher Ed Farmer. Kasper will switch places on select series with TV announcer Jason Benetti. No word on whether radio analyst Darrin Jackson will call two innings of play-by-play per game as he did with Farmer.

Cincinnati: Following Thom Brennaman’s midseason ouster after using an anti-gay slur on a hot mic, field reporter Jim Day called games on TV for the rest of the season. The Reds elected to return Day to his previous spot for 2021, and hired John Sadak, a multi-sport voice for CBS Sports Network and Westwood One who did part-time work for New York Mets’ radio broadcasts. The Reds also tweaked their analyst rotation, bringing in Cincinnati native and Hall of Fame shortstop Barry Larkin for all 81 home games. The road games will be called by former Reds pitchers Chris Welsh and Jeff Brantley, with one working on radio while the other is on television. Presumably, the two will split radio duties on home games as well.

Los Angeles Angels: After Victor Rojas left to become a general manager in the minor leagues, the Angels surprised everyone when they announced that they had hired Sunday Night Baseball voice Matt Vasgersian as their primary TV broadcaster. Vasgersian has broadcast the World Series on the MLB International feed for the last six years and is one of the more popular announcers of the sport. He has not worked with a team since he left the San Diego Padres in 2008. The New Jersey-based Vasgersian has indicated he will not call many Angels games this year due to his national work, so former Angels farmhand Daron Sutton, returns to an MLB telecast after an eight-season absence. Jose Mota, who has held a variety of broadcasting roles with the Angels in both English and Spanish, joins Mark Gubicza as part of a three-man TV booth.

Miami: The Fish are transitioning from a split play-by-play setup on radio to a one play-by-play, one color commentator setup. Previous #2 radio voice Glenn Geffner will handle the majority of games, with 81-year-old Hall of Famer Dave Van Horne calling around a third of the games. The primary analysts will be Miamians and former Major Leaguers J.P. Arencibia and Gaby Sanchez, with TV sideline reporter Kelly Saco, a softball player at Syracuse, working select series.

Minnesota: Hall of Fame pitcher Bert Blyleven, a part of the team’s television broadcasts since 1995, left the booth after the 2020 season and is now serving in a front-office role. The Twins will continue to use their analyst-by-committee setup, with former players Justin Morneau, Roy Smalley, and Jack Morris working alongside veteran play-by-play man Dick Bremer.

Philadelphia: Gregg Murphy, the sideline reporter who served as Tom McCarthy’s fill-in on television when the latter was working NFL games for CBS, was let go by NBC Sports Philadelphia when NBC’s regional networks shuttered all their sideline reporters. McCarthy’s substitute voice when he is on football duty is still unclear. Flyers TV voice Jim Jackson, who called the middle innings of Phillies home games on radio, will not return to the baseball booth in 2021. Popular radio voice Scott Franzke will likely call every inning on radio this year.

San Diego: There’s a change on radio for the Padres as 41-year broadcaster Ted Leitner stepped away in favor of a community relations role. Leitner will continue in his role as the voice of San Diego State football and basketball. The Friars’ #2 radio broadcaster, 38-year-old Jesse Agler, who has reportedly been a finalist for at least one Major League TV job, slides over to the #1 spot and will call every inning this year. Second-generation Padre Tony Gwynn Jr. moves from the TV studio to the radio booth as an analyst.

St. Louis: Hall of Fame color commentator Tim McCarver, who opted out of his schedule last season due to COVID concerns, will not return in 2021. The two-time World Series champion is possibly the most recognizable baseball color commentator of all-time. The 79-year-old is seemingly choosing to go out quietly. The following isn’t a change for now, but for a year from now: 81-year-old Mike Shannon, who has been associated with the Cardinals in some capacity since 1958 and has been on their broadcast team since 1972, has announced this will be his final season as the team’s radio play-by-play announcer. He will work 60 games, all of them at Busch Stadium.

Toronto: With the Blue Jays starting their season outside of Canada, rightsholder Sportsnet and its parent company, Rogers Communications—which owns the team—have elected to use a television/radio simulcast for this season, possibly the first MLB simulcast geared more toward the television audience. #2 radio voice Mike Wilner was fired following the 2020 season and took a job as a columnist with the Toronto Star. Primary radio announcer Ben Wagner will work the sidelines onsite from Dunedin, Florida. Ex-Jays Buck Martinez and Pat Tabler will call the majority of games, with ESPN’s Dan Shulman working as many games as his schedule allows. Here’s hoping Rogers and the Jays bring back a separate radio feed when things are back to normal in 2022.

Isn’t it something that so few teams have announcers who do both TV and radio?

A minor correction or two. Giants broadcasters don’t usually switch, but Jon Miller does local TV usually with Krukow, and when somebody is off, often Miller, Kuiper, and Flemming will swing between media.

There are some guys who do both, occasionally. Aside from the ones I listed and your mention of San Francisco, I know Levering has started filling in for Anderson in Milwaukee. Agler would fill in for Orsillo, but I’m not sure if that will continue this year. Jageler in Washington on a couple series a year. Cotroneo sometimes in Oakland.