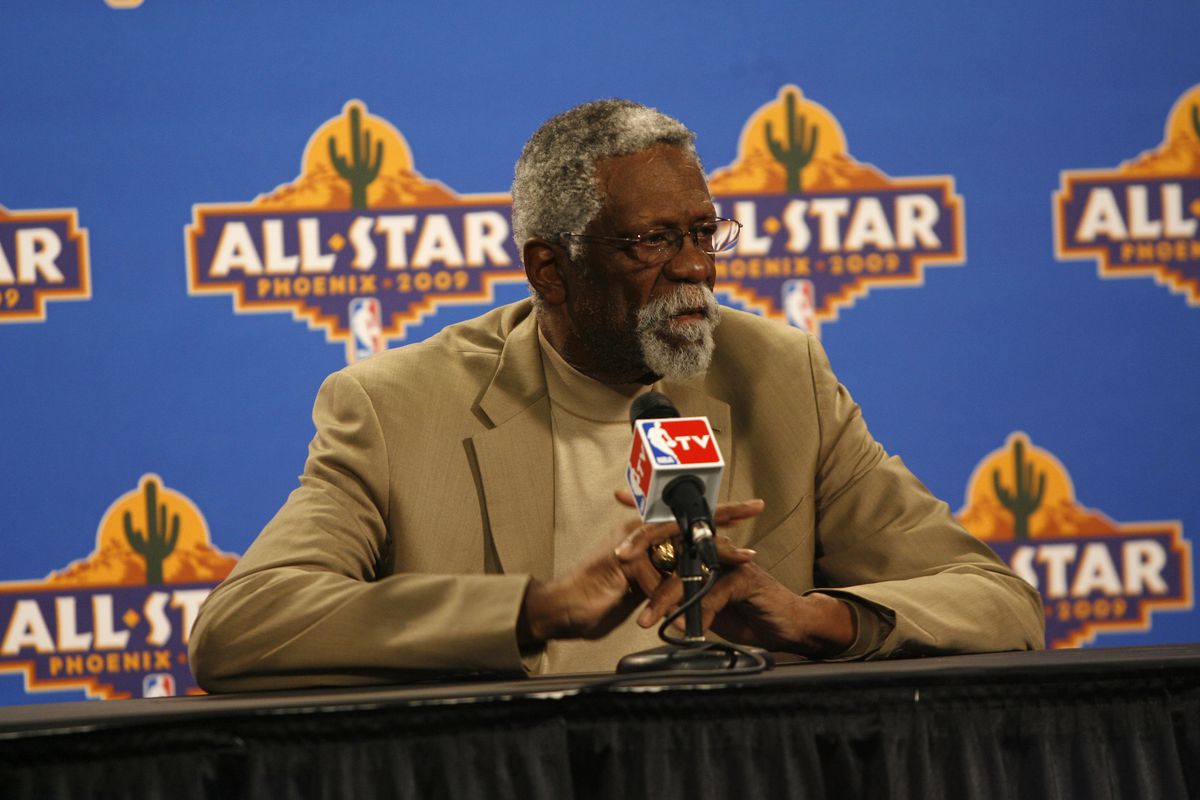 George Mikan, the bespectacled 6′ 10 NBA Center of the Minneapolis Lakers was the league’s first big man. He died in 2005 just short of his 80th birthday. The league was still an embryo then. Mikan led the club to five titles between 1949 and 1954. In time, the set shot would die. The NBA, trying to identify itself, would play doubleheaders all across America. The most famous spot was Hershey, Pennsylvania where Wilt Chamberlain pulled off something never repeated since, 100 points in one game against the Knicks.

The league early was without a shot-clock, a consistent TV package, radio stations to carry games, much coverage in local newspapers or many local fans to attend their home contests. Even with star-studded players, the Celtics would draw four to five thousand fans at the old Boston Garden.

Bill Russell was a rookie in 1956 and Wilt Chamberlain in 1959. They were NBA rookies then and the NBA changed forever. But it too would take time for many reasons. The rivalry between the two men would intensify.

In those years, it was baseball, Mantle and Mays. Interest in the NBA began with Wilt and Russell. In time television would come along, Russell would be considered a team man and Wilt a dominant independent, who could do it all individually, lead in scoring, rebounds, assists and rebounds. Just say, Wilt against Russell and basketball fans’ hands quivered.

When the overpowering center passed at age 88 Sunday, I thought of his career since playing, player-coach and the years that followed broadcasting. In the late 1960s before he gave up those powerful sneakers, the NBA had limited sway in the broadcast world.

The names of the analysts were low-key guys like Jack Twyman or Rick Barry.  It was a different time. No attractive names like Charles Barkley today In fact, it wasn’t until 1969 that every game of the title series was televised nationally. It was a primitive world compared to today. 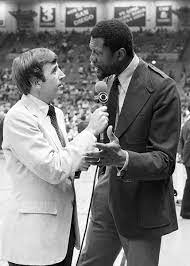 Bill partnered with Keith Jackson on ABC and Brent Musburger on CBS. He also did color on the controversial Olympics in 1972. The “We wuz robbed game.” Yes, the one in Munich, marred by the terrorist Palestinian attacks, resulting in eleven Israeli deaths.

Russell and ABC’s Frank Gifford partnered on the Gold-Medal game and all the nonsense that went on at the end of it, enabling the Soviets to win. From a TV standpoint as the game was winding down to another American gold, we were sufficiently ahead late. So Bill was asked by ABC producer Dennis Lewin to leave his broadcast position at the table and head to the locker room to await an anticipated championship American team. The medal didn’t eventuate.(Musburger and Russell)

The unanticipated shenanigans by the officials forced Gifford a football man to deal with the chaos alone at the table.

Years later, I remember a cute line by Russell while partnering with Keith Jackson in an NBA playoff game. Russell to Keith, (paraphrasing): “I’m not going to say another word, Keith. This game is just too exciting, Let’s just watch and enjoy. It is too thrilling!”

The NBA’s local broadcasting rules were not very rigid in those days. In the 1960s, Marv Albert and his solo WHN, New York, radio microphone went to Philly for what I remember was another big playoff game in the Eastern Conference finals. There was no national TV. In Philly, he called the Wilt Chamberlain-Bill Russell encounter back to New York exclusively; no analyst, on WHN Radio. I got the feeling that all basketball fans in the neighborhood were listening to Marv. Fifty plus years later, the very thought of Wilt against Russell brings back memories of the NBA’s nascent years.

The broadcast personalities who covered the deceased Russell were Marty Glickman and two of his idols, Johnny Most and Marv Albert. Chick Hearn too would later.

The men confronted one another 94 times between November 7th 1959 and May 6th 1969. Russell against Chamberlain, long over, there was nothing like it.

Arthur’s Solomon is spot on about Gary Cohen and so many other TV voices who fail to grasp the difference between their radio days and those spent at the television mic.

They could learn from this one, easy lesson:

Find a video from Vin Scully’s final seasons with the Dodgers. He worked all 9 innings of their home games, the first three innings simulcasting on TV and radio. During the first three, he would describe every move on the field, from the pitcher peering in for the sign to the batter watching the ball into the catcher’s glove while still weaving in interesting commentary gleaned from his pregame face-to-face preparation with players and managers.

Come inning 4, he’d be on TV only, His gears immediately shifted. He respected the viewer’s ability to believe his/her own eyes. He’s provide more behind the scenes details, again threading in commentary.

All this, Vin did as a solo.

Many of today’s voices appear to lack a bit of respect for preparation of background material and think they can wing it just by proving live captioning of what’s on their screen. Baseball goes deeper than that.

For a contemporary peer who’s doing it right, tune no further than now-TBS’s Bob Costas. Or perhaps the Red Sox’ Dave O’Brien.

Consider that in bygone days, TV announcers were obliged to speak more often; that was before there were permanent on-screen graphics that now display the pitcher, batter, score, inning, pitch speed, pitch count. Some announcers used egg timers to remind themselves to refresh all that info during their play by play patter.

As in all things, times change.

Russell also worked with Chris Schenkel on the NBA before ABC elevated Jackson to the lead role, partly as compensation for taking him off of Monday Night Football. Russell also worked with Rick Barry, and that led to a bit of a dust-up when Barry made a reference that could have been construed as racist. On TV vs. radio, it’s interesting that when Vin would rotate on TV with one of the other Dodger announcers, when he came back from radio to start the 7th, I can remember that he would be a little more descriptive and then pull back,… Read more »