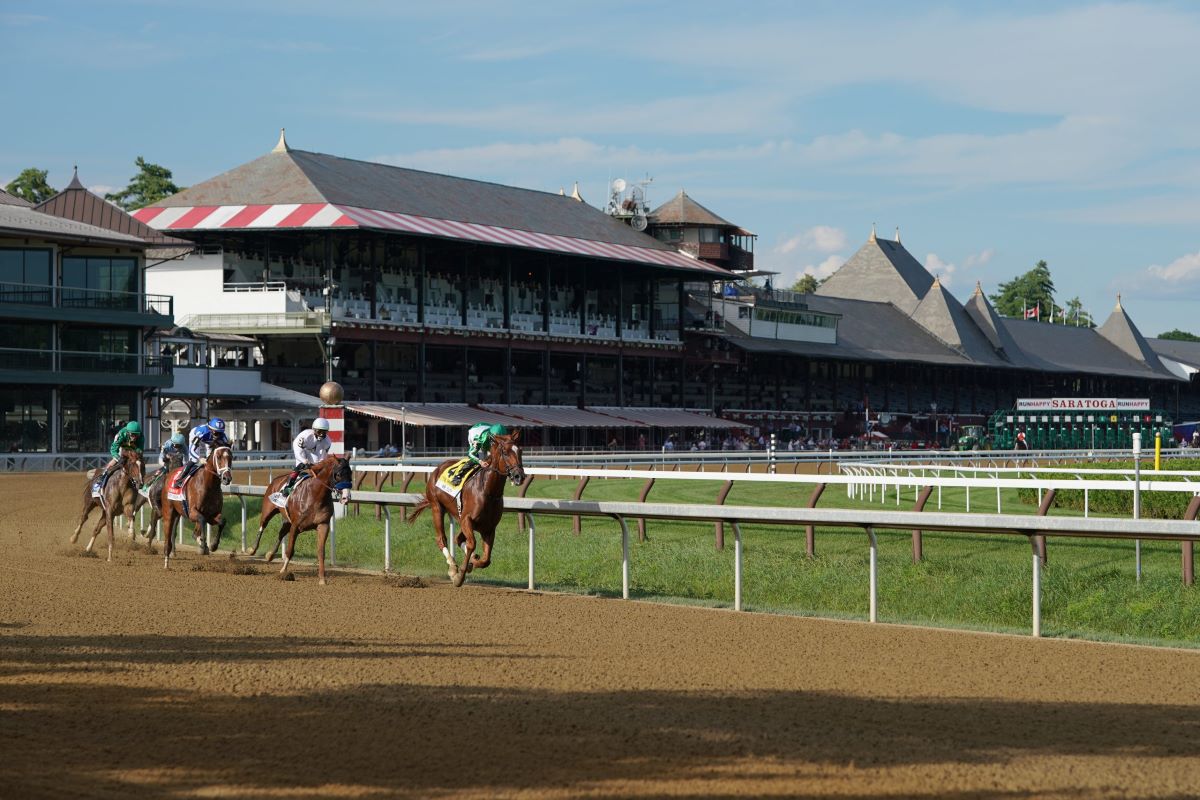 We’ve written some very positive things about Fox Sports Two’s racing show “Saratoga Live.” This won’t be one of them.

This past Saturday was one of Saratoga’s biggest days of the entire meet, which Fox continually reminds us is the most prestigious racing meet in the country and maybe the world. Known as Alabama Saturday it features Saratoga’s version of a female Kentucky Derby with 3-year-old fillies going the classic Derby distance of a mile and a quarter in the Alabama Stakes. This race has produced champions for decades.

But this Saturday began strangely for Fox Sports Two, which usually comes on the air each day at 1p.m., just before Saratoga’s first race. This Saturday it came on the air at 2pm, missing the first two races in order to air a women’s lacrosse match. All they missed at Saratoga was one of the most anticipated 2-year-old races of the year, with young colts from the barns of great trainers like Todd Pletcher and Steve Asmussen ranging in price from a quarter million up to $1 million. Odds are that several from that race will wind up in next May’s Kentucky Derby.

Then, at 3:59 p.m., just as the horses were loading into the gate for the sixth race, Fox suddenly cut away to a commercial. This had to be a mistake, right? No, it wasn’t. Fox had contracted with MLB to show the Dodgers-Mets game at 4p.m. on Fox Sports One, but since the New York Yankees game with the Twins wasn’t over on that channel, they moved the start of the Mets-Dodgers game over to Fox Sports Two. This came with no warning to horse racing fans who regularly watch that space, at that time, five days a week. And to cut away seconds before the gate opened for the sixth race was preposterous. It was Heidi all over again. (In 1968, NBC, with a couple minutes remaining in a tight, late season AFL game, cut away at exactly 7p.m. to show the made for TV film “Heidi.” It caused an uproar.)

That Fox and MLB thought that any Yankees game would end in under three hours was ridiculous. The average MLB game in 2021 runs 3:08 and Yankees games run longer and never start until about 1:10 p.m. So the odds were good that Fox would have to move “Saratoga Live” off the air. But where would it go? Unlike ESPN, Fox wasn’t sending the show to another channel. It finally ran a crawl telling racing fans they could access the show on the Fox Sports app. And if you were one of the millions of fans who didn’t have the app, too bad. And per chance if you tried to sign up for the app to see that sixth race, the race was long gone by the time you got on the app.

The question was, how long would they shut out those Saratoga fans. It was about 4:35 p.m. when the racing came back on with no mention from the cast of the time lost or an apology to the fans. At some point Fox’ producer must have told them, but we don’t know. When the Yankees game ended, Fox switched the Mets game over to Fox Sports One and “Saratoga Live” was suddenly back on Fox Sports Two.

A week before, NBC was broadcasting the men’s golf amateur championship from Oakmont Country Club, outside of Pittsburgh. A close match entered the final two holes as the clock approached 6:00 p.m.

And just like that NBC told us to watch the rest of it on the Golf Channel, so that the network could throw it to its local stations for the 6 o’clock local news. It didn’t matter that golf fans had been watching this match play championship for two days. Local news was more important, at least to NBC it was.

Tom Amoss is one of racing’s hottest trainers and he is also one of Fox’ best racing commentators on “Saratoga Live.”  Skilled, bright and concise, Amoss gets important information across to racing fans while not talking down to them. He is also by far the best handicapper on the air. Pay attention when Amoss picks a race for Fox because he’s right far more than their paid handicappers Andy Serling and Jonathon Kinchen are. I wouldn’t be surprised if there are horse owners who have Amoss as their trainer just so they can get his tips.