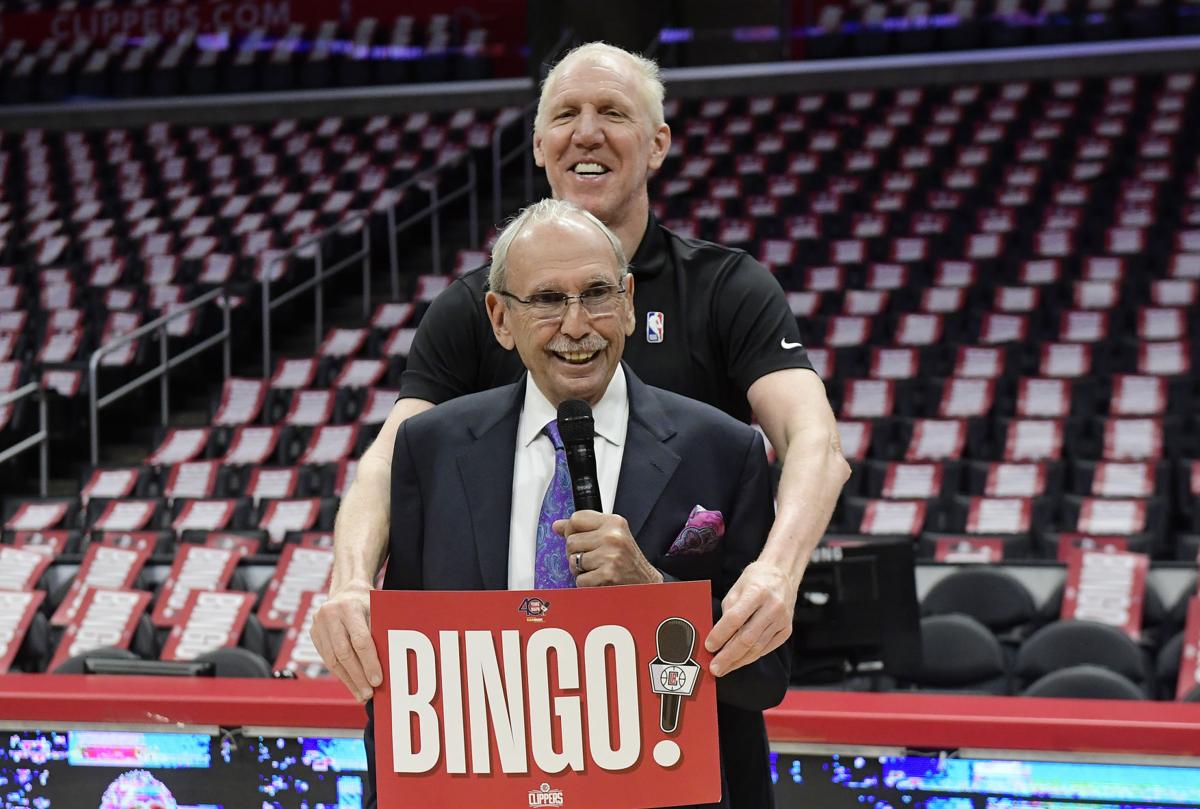 Retired Clippers' voice with his onetime broadcast partner, Bill Walton. 'Bingo,' was Ralph's signature line for a made basket.

For the Warriors, the first round is just step one. They’re expected to win the whole thing again, to three-peat. For the Clippers, getting to the playoffs was a journey. Now, down 3-1 in the series, it’s quite likely that LA’s season will end tonight in game five in Oakland.

Should the team lose, most of the players and the coaches will collect their thoughts, catch their breath and return for training camp in September.

But the team’s legendary broadcaster won’t. Ralph Lawler is hanging it up. Barring a Hollywood script of ‘Win one for the Gipper,’ the end will strike when the Clips are eliminated. When he takes his seat at Oracle Arena in Oakland, Lawler will know full well that the chances are pretty good that his illustrious play-by-play career is about to reach the finish line.

The franchise arrived in San Diego from Buffalo in 1978 and then moved to Los Angeles in 1984. Other than two disjointed seasons, Lawler has been the team’s voice for 39 of their 41 seasons in California. He turned 81 on Sunday.

Out west, it took the hapless club 14 seasons of despair to earn its first playoff berth. During that galling stretch, the Clippers went through twelve straight losing seasons, enough to drive anyone mad. Not Lawler.

He put his deep, upbeat voice, public optimism and rich descriptions to work every night. Working in the decrepit LA Sports Arena, he would fancifully declare, “It’s a beautiful December day in Southern California and we’re enjoying an NBA basketball game. It doesn’t get much better.” The fact that six weeks into the season, the Clippers’ lot was already cast didn’t matter. Ralph always narrated with grace and enthusiasm. He would praise the competition but was rarely critical of his own trampled upon team.

Think of it this way. With his broadcast career concluding, Lawler’s resume qualifies for a new career, a role in television’s reality series Survivor. In his four decades, Lawler outlasted 18 coaches, including one twice. He also out-survived the team’s longtime mercurial owner, Don Sterling.

Like Jack Brickhouse, Bill King and Chick Hearn, he had a solid apprenticeship in Peoria where he grew up. But through most of Ralph’s decades broadcasting basketball in LA, there was one fondly beloved name, Chickie Baby. Hearn was the toast of the town; beginning with Wilt, West and Baylor and continuing through Magic, Kobe and multiple championships. The Clippers weren’t relevant.

Those in the know though recognized Ralph’s gift to call games. He made his first mark a couple decades ago, introducing Lawler’s Law, the first team to score 100 wins the game. It’s often referenced by other broadcasters and fans.

Looking back now, Lawler is one of LA’s all time five best play-by-play announcers. There’s Vin Scully in a class of his own, the Kings’ Bob Miller, Dick Enberg who first established his wares doing the Angels and Rams, Hearn and Lawler. Truth be told though, it wasn’t until Chick passed in his Laker boots, Miller retired and Vin left to SoCal’s tears that Ralph got his due recognition.

Yes, Lawler presided over his microphone with joyful aplomb. He was a throwback, a creature of habit. The fact that it’s 2019 didn’t matter. Forty years after almost all announcers in America used headset microphones to free up their hands, Ralph insisted on using a stick mic, maybe as an inanimate crutch for putting up with a perennial loser.

Lawler never took anything for granted. I can remember meeting him in the 1990s. We talked in the press room and he confidently showed me his real estate license. In other words, Ralph always had a backup. Making a living calling games can be a financial roller coaster.

I would imagine that at some point if the Clips are out of contention tonight, the TNT cameras will have a headshot of Lawler. Marv Albert who’s known him for forty years will deservedly heap praise on a man enjoying his valedictory performance. Marv knows what NBA endurance requires. He did his first game in 1963 as a callow 21 year old, shadowing his mentor Marty Glickman.

Lawler announced his retirement before the season but it didn’t temper his enthusiasm. He called his final year with equal zeal. In December, he told me, “My wife and I are excited about the next chapter but living this last season to the hilt!”

Win or lose tonight, Lawler has at least one more official appearance, attending the Naismith Hall of Fame next September. It’s in Springfield where he will be the recipient of the coveted Curt Gowdy Award for excellence in broadcasting.

It’s interesting that when Vin and Chick started their legendary careers, Bob Kelley was doing the Rams, had done the minor league Angels, was all over LA media, and had a vastly different style–my dad, who grew up in LA listening to him, recalled that he would say things like, “At the end of 3, the Angels 4, the other guys 1.” Vin went totally down the middle and Chick clearly favored the Lakers but would knock them (my favorite criticism was when he would say of a missed shot, “Marge could have made that one.”). LA has been truly… Read more »