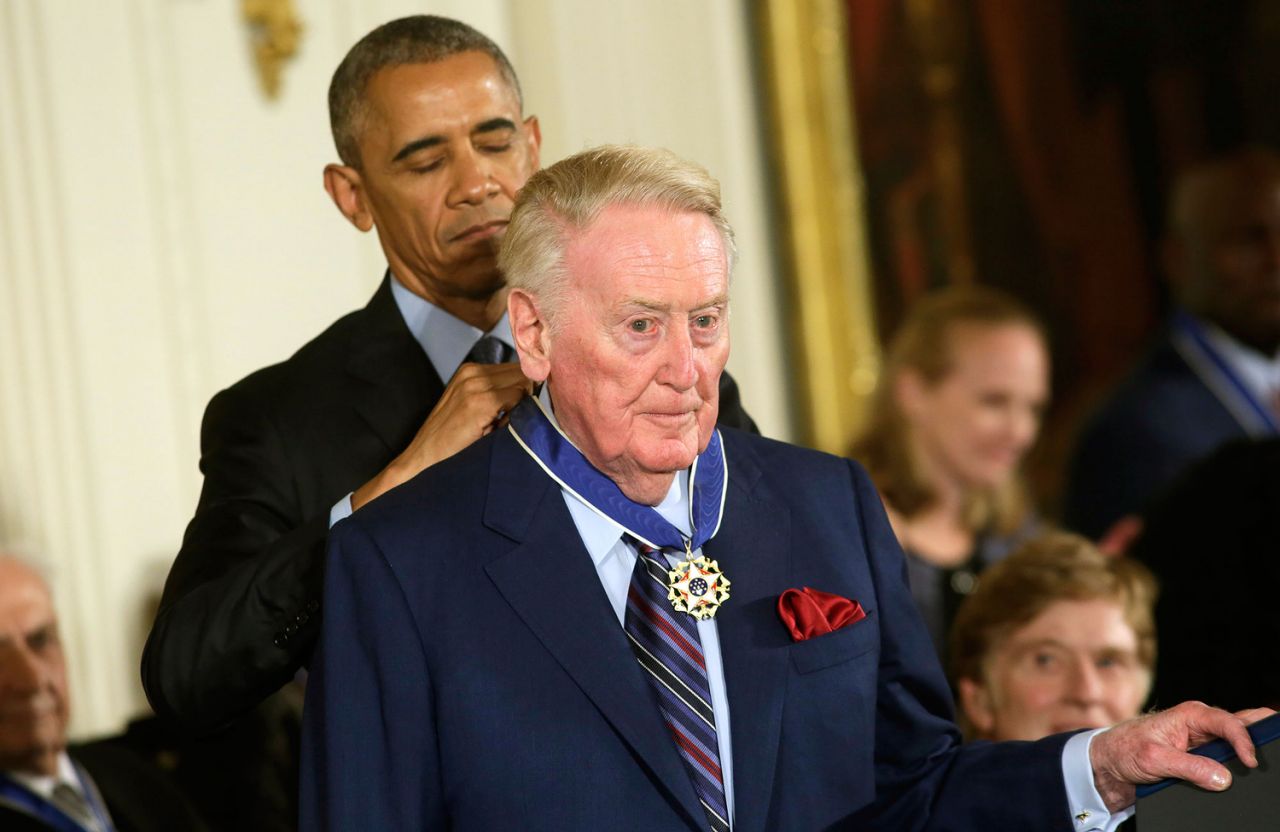 BARACK OBAMA: A PIONEER, IN MANY WAYS

In 2009, Barack H. Obama became the first U.S. president to be an African American, call Chicago’s South Side home, and later wear the exquisite White Sox Olde English jacket in the White House. The Pioneer was also a true basketball fan, hoops his favorite sport, reflecting a changing culture. The U.S. senator from Illinois was both policy wonk and celebrity.

Obama’s love of The City Game was the Real McCoy. He played in high school for the Punahou School in Hawaii. A 2008 Associated Press photo shows him, stumping for the Democratic presidential nomination, driving for a layup against the University of North Carolina’s Tyler Hansbrough in a pickup game at Chapel Hill. As president, he yearly completed his NCAA tournament bracket—and even played in pickup games at the White House.

Obama was the first overall technology president, with whom Millennials and younger people found kinship—not only a racial but high-tech trailblazer. In 1955 future president Ronald Reagan hosted an ABC special, “Tomorrowland,” to debut Disneyland theme park in Southern California. Now all sport would be beamed, foreseeing its tomorrow, TV trading two-camera black and white for gaudy-graphic color. Virtually each game for a fee now accesses team and/or announcer archives.

In the 44th president’s (hereafter, 44) first year in office, Obama showed élan at D.C.’s new Nationals Park marking the 2010 centennial of W. H. Taft’s initial first pitch. Asked to wear the Nats cap while throwing, he instead hid his hometown White Sox cap in a glove, revealed it on the mound, put on his Sox hat, and threw, wowing even a Republican. In 2014, The Pioneer became the first president in office to visit to enter baseball’s Hall of Fame in Cooperstown since its 1939 debut. His “timing could not be better,” he said—the Hall’s 75th birthday—letting him also “bask in the glory of the 2005 World Series win”—the Sox first title since 1917. (Crowd applause.) To paraphrase his “Yes, we can!” 2008 campaign mantra, “Yes!” he said. The White Sox had.

Obama also gave edge to the White House visit by the yearly Series victor and other guests. In 2010 he welcomed the ’09 Yankees. “It’s been nine years since your last title, which must have felt like an eternity for Yankees fans,” he said. “I think other teams would have been just fine with a spell like that—the Cubs, for example,” their last title then 1908.

A year later he hailed Jewish American Heritage Month with guests including Sandy Koufax, prompting the audience to applaud the great mid-1960s pitcher. In 1965, Dodgers manager Walter Alston wanted to start him in the Series opener, but Koufax felt obliged to abstain because it fell on Yom Kippur. Such fidelity made Sandy a hero to his faith—the reason he was the only guest Obama cited by name. “Sandy and I actually have something in common,” said the president. “We are both lefties. He can’t pitch on Yom Kippur. I can’t pitch.” Laughter and applause.

Obama liked such players as Sandy, Derek Jeter, and Mariano Rivera, teaching “timeless values, just like baseball,” following them as he grew up in Hawaii, graduated from Harvard Law School, became a teacher and author, and was elected to the U.S. Senate. He defeated Hillary Clinton, then John McCain, to become president, a reading of his speeches showing two themes. First was the centrality of Jackie Robinson, in 1947 cracking baseball’s color barrier. His struggle helped destroy segregation—and helped make Obama’s election feasible. The second was the centrality of neighborhood—Tip O’Neill’s “All politics is local.” It applied to sports, too. After Chicago’s 2005 Series sweep, Obama rose in the Senate to note that its four victories were won by a total of six runs. “Win by the skin of our teeth. That’s been our motto this year.”

On January 16, 2017, four days before Obama left office, an otherworldly event for any Chicagoan, even a White Sox fan, occurred. The world champion Cubs graced his last official event at the White House. “Throughout our history, sports have had this power to bring us together, even when the country is divided,” said the president, referring to the recent Clinton-Trump election, or was it Chicago’s two big-league teams? His grin signaled a dig was coming: “Now, listen, I made a lot of promises in 2008. But even I was not crazy enough to suggest that during these eight years we would see the Cubs win the World Series.”

If that was possible, Obama seemed to say, what was not? He might have been speaking of his own life.

Very enjoyable, as always, and if I may add something that I do not intend to suggest my own politics: the people chosen were not there for their politics. I know that my favorite recipient in the group of honorees mentioned above completely disagreed(s) with Obama’s politics. That didn’t matter to either of them. Here’s to more of that.

By the way, Obama apparently went to the same gym as the White Sox GM, Kenny Williams, and would bug him with ideas for trades.

By the way, for connoisseurs of baseball humor, Obama’s line on Koufax ….

Joe Black once said of Tommy Lasorda, who insisted that Koufax kept him off the 1955 Dodgers, that Koufax threw better right-handed than Lasorda did left-handed.

And Tommy John, after his surgery, said he asked Dr. Frank Jobe (he was, as Tim McCarver put it, one of the patients of Jobe) to put Koufax’s fastball in his arm, but, unfortunately, Jobe gave him MRS. Koufax’s fastball.