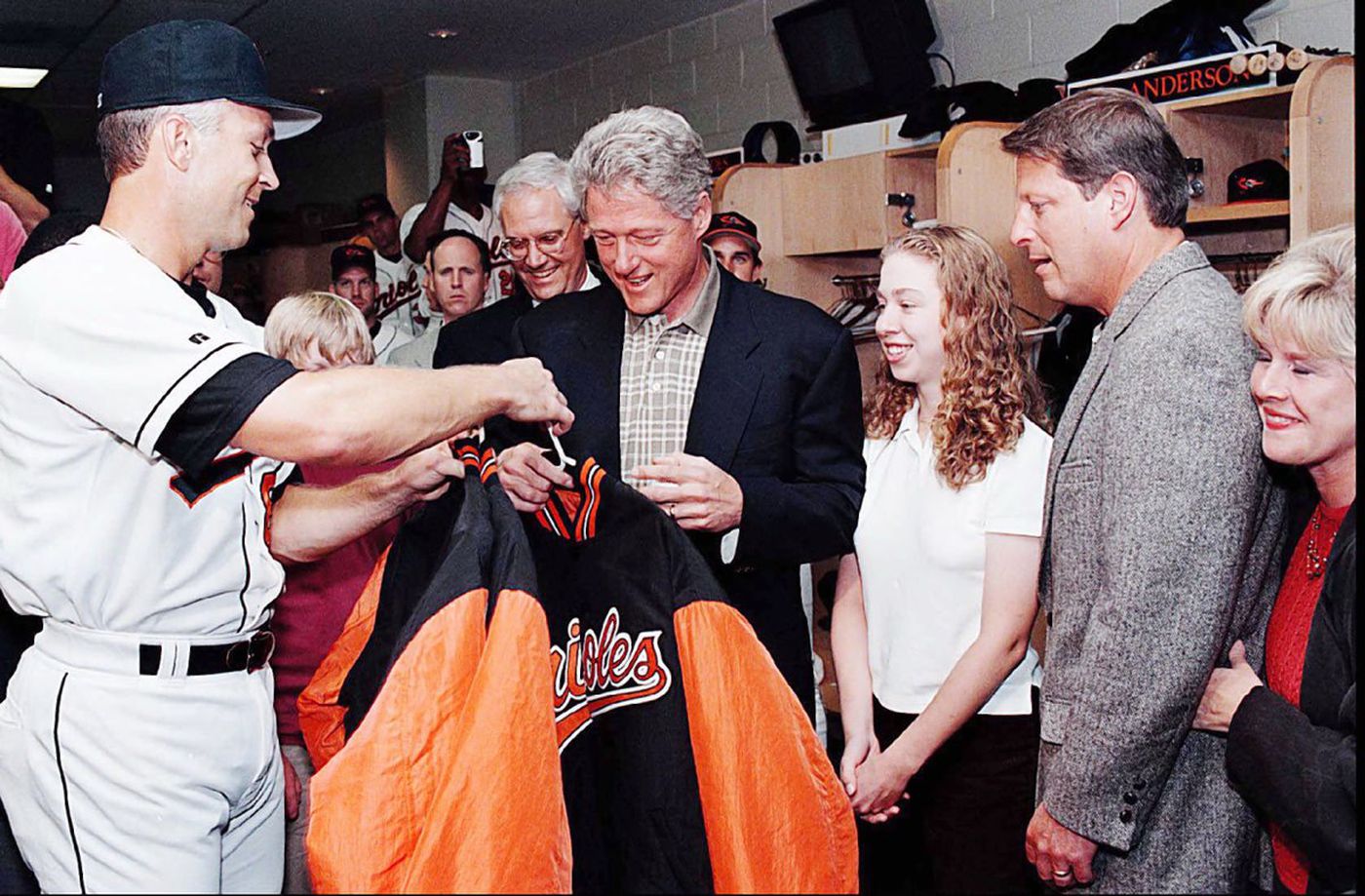 Bill Clinton learned baseball on the wireless, hearing Harry Caray etch the Cardinals over booming 50,000-watt KMOX St. Louis. To a tyro in rural Arkansas, Harry’s “Holy Cow! It might be! It could be! It is!” upon a homer equaled today’s Internet, cable, and high-tech’s horn of plenty, evoking a faraway world through soft soap and hard sell.

In a dysfunctional family, Clinton forged an alternate boyhood as an active reader, student leader, and musician, playing the saxophone. “I didn’t play a lot of sports as a kid,” he told ESPN’s Mike & Mike Show, “but I almost dunked once in a church league basketball game.” He knew “baseball okay,” but “I knew from the start, my enjoyment was as a spectator. And being a Cardinals fan, how could you not love them on the radio?”

In 1963, Stan Musial retired, Caray having sung his career like a bartender does an aria. That July, Clinton, a Boys Nation senior, met President Kennedy at the White House. Next, Bill was so wowed by Martin Luther King Jr.’s “I Have a Dream” speech on TV that he memorized its entirety. Georgetown ’68 won a Rhodes Scholarship to Oxford, then graduated Yale Law School ’73. Each involved rhetoric—not Caray’s “Holy Cow!”; rather, wrote David Maraniss, prose buoying Clinton’s “budding … political skills.”

In 1974, Clinton returned home to teach law, marry fellow Yalie Hillary Rodham, and be elected attorney general and governor. Elected president in 1992, the president and Arkansas hoops addict attended the victorious Razorbacks 1994 Final Four, also becoming fond of another team, the Cardinals’ arch-rival Cubs. For this, blame or credit must lie with Clinton’s wife, raised on Cubs Voices from Jack Brickhouse to Lou Boudreau—and, of all people, Caray, hired by Superstation WGN-TV, whose 1980s audience topped even his Redbirds’ peak, beamed by satellite from Alaska to Key West.

A decade before his death in 1998 a newspaper wrote, “The greatest show, no ifs or buts, is to hear . . . Caray going nuts.” This was also Clinton’s attitude toward sports: sensory, not statistical. The best example was his devotion as governor to watching daughter Chelsea, an only child born in 1980, play softball for the Molar Rollers in the Little Rock Hillcrest Softball League, formed by parents because daughters lacked organized sports. Clinton could normally be found at almost any time talking politics. According to the book The Presidents’ Game, Dad’s sole distraction was Chelsea, playing softball.

James “Skip” Rutherford, a longtime friend whose daughter was Chelsea’s teammate, recalled a game in which he found Clinton studying the field. As usual, Rutherford tried to talk politics only to find Clinton wanting to talk ball. “‘We’re playing terrible defense,’” Skip recited Clinton’s pain. “I asked him . . . again. He hadn’t even heard me he was so wrapped up in the game.” Finally, Bill asked Skip what he was doing that weekend. “I said, ‘I don’t know.’ He said, ‘Let’s have a good practice.’” Rutherford then had to remind him that neither of them was a team coach.

Entering the White House, the inveterate golfer still hit the links—save Dwight Eisenhower and later George W. Bush, the sole president to sink a hole-in-one. In 1993, Clinton posthumously awarded the Presidential Medal of Freedom, America’s highest civilian honor, to African American black tennis player and humanitarian Arthur Ashe. In 1997 he helped baseball permanently retire Jackie Robinson’s No. 42 on the 50th anniversary of his big-league debut, cracking the color line. The observance occurred before a game between two teams perhaps fated by history to play: Dodgers-Mets at Shea Stadium.

“I know one thing,” the president said. “Cal wants to hit this pitch, but if it’s not a strike he’ll take the walk for the good of the team because that’s the kind of guy he is.”

Cal then swung—and boom! Home run! Jon began describing it, but Clinton, with his own microphone, began yelling, “Go! Go! Yes! Ah-ha!”—the president clapping his hands, shouting into the mic, and helping to call the homer! What did Miller do? What could he do? He couldn’t snatch Clinton’s mic away—so Jon became background noise, his voice almost disembodied.

“The bad news was that it kinda’ put me off, because this was a major moment in baseball history,” Jon later said, tongue in cheek, “but the good news mattered more. He was the President of the United States. The First Fan. He’s reflecting the excitement of the night better than any broadcaster could.” Plus, added Miller, an admirer of the 42nd president, “I could now put on my resume, ‘Worked with President Bill Clinton, a very close friend.’”