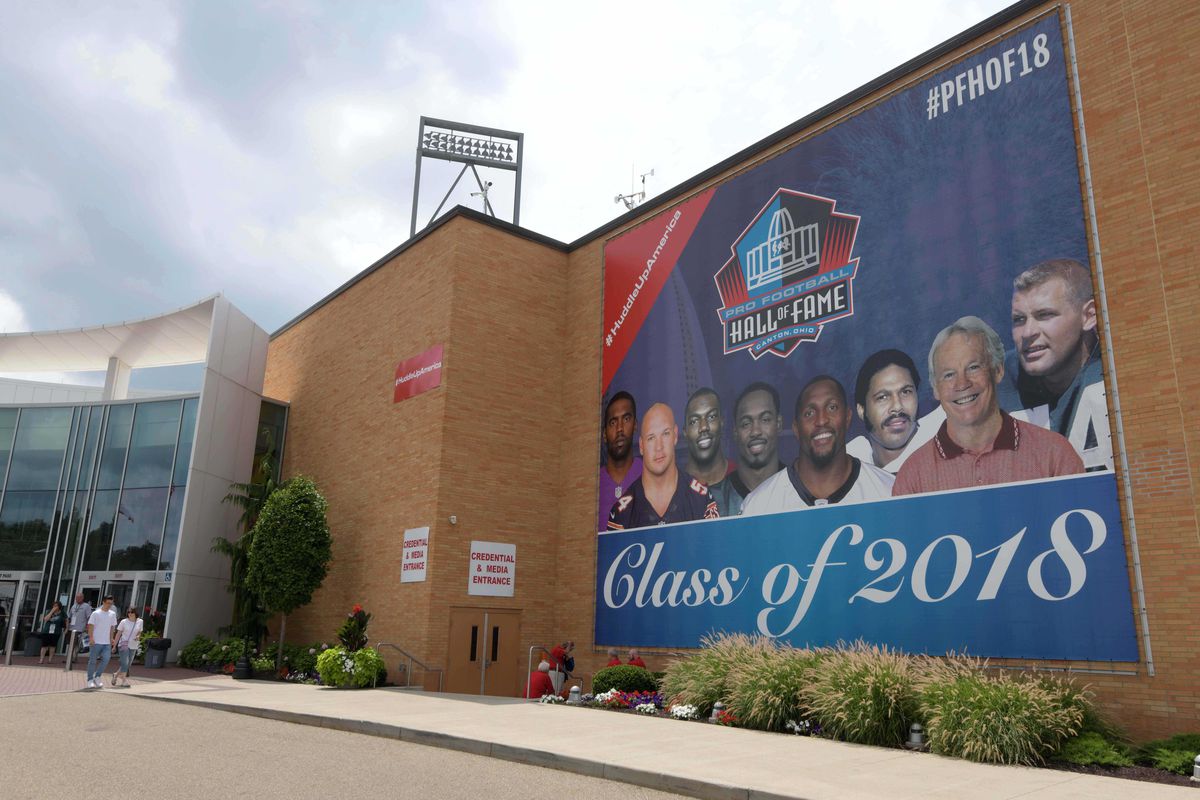 Since its inception, only 2 of the 30 Pete Rozelle awardees have been team announcers, 28 were on-air network talent or officials.

As it now stands, the annual Pete Rozelle Award, established in 1989 and named for the late NFL commissioner, has generally honored national broadcasters across a fairly wide range of roles. The first awardee in 1989 was Bill MacPhail, the longtime president of CBS Sports, the network with the longest NFL relationship. Other executives included Ed Sabol, the founder of NFL Films and Val Pinchbeck who presided over the league’s television office.

Many of the thirty winners to date have been network on-air personalities; a mix of studio personalities including Irv Cross and Chris Berman, play-by-play icons such as Al Michaels and Curt Gowdy and a couple color commentators, John Madden and Dan Dierdorf.

Two women were recognized, sideline reporters and journalists Lesley Visser in 2006 and Andrea Kremer who received the award this year.

Locally, there have been only two; Van Miller, the late Buffalo Bills’ play-by-play voice and Steelers’ color commentator, Myron Cope who developed the terrible ‘terrible towel.’

Baker explained that the Hall has a committee made up of those he suggests are media experts. The group determines the Rozelle nominees without releasing the names to the public. Later the winner is established and announced. He would not share the names of any  committee members, suggesting that he’s concerned voters would then be lobbied by interested parties.

Now Baker says that he and his team will weigh the opportunity of creating a new award, distinct from the Rozelle, to honor esteemed local voices who have brought the game to life on-air. Recognition by the Hall would be a breakthrough accomplishment for the top local broadcasters who have essentially been shunned for decades. It could also build interest among fans of these announcers, market by market. Teams would also be afforded the opportunity to build anticipatory excitement through media outlets in their region.

Baseball functions differently with its Ford Frick Award. The National Baseball Hall of Fame announces those nominated each year in advance of the actual vote cast by the living winners  and a number of baseball broadcast historians. Basketball’s Nasimith Award is administered similarly to Pro Football’s. It does not announce its nominees publicly. Once the winner is declared, Naismith officials release the name. That’s it. There’s little opportunity to do any build up.

Baker, an innovative executive and former commissioner of the Arena League, has been at the Hall for four years. He has worked on the expansion of the Johnson Controls Hall of Fame Village that when completed will include a new stadium, a National Youth Football and Sports Complex, a state-of-the-art football themed hotel, a Performance Center and more.

Currently, the Hall also recognizes a top football writer each year through the Dick McCann Memorial Award. This year it went to Charean Williams, formerly of the Fort Worth Star Telegram.

“Yes, we were very happy to have two women receive the media awards this year, Charean and Andrea,” Baker said. He also referenced a third media award that the Hall presented for a 50th time, the Dave Boss Award for excellence, for the photo of the year.

While football is a network sport, only 2 of 30 winners were local broadcasters. The Rozelle numbers are lopsided when compared to basketball, hockey and baseball. By comparison 34 of the 38 Foster Hewitt Award winners for hockey built their credentials locally with teams. Of baseball’s Frick Award, 38 of the 42 honorees spent significant time broadcasting locally. The exceptions are pioneer Graham McNamee, Joe Garagiola, Tony Kubek  and the most recent winner, Bob Costas. (Garagiola did do some Yankees, Cardinals and Diamondbacks but was essentially an NBC announcer. Kubek did spend five season with Yankee telecasts but too is remembered for his NBC work.)

Basketball is a mixed bag. Fifteen of the 29 Gowdy winners worked locally. The rest produced their marks nationally. The Naismith’s challenge is more complicated. It serves a dual constituency, pro and college broadcasters.

By no means making any commitment, Baker expressed another idea openly in our phone call yesterday. The Hall might instead consider honoring local voices as part of its centennial activities, celebrating the 100 year birth of the NFL in 2020. The celebration will begin next year. Baker says the centennial exhibits will include local legends who helped grow pro football. As an example, he mentioned Clint Murchison, Jr., an MIT grad and former Cowboys owner, who initiated computerized scouting.

The first two names of current broadcasters who deserve recognition are Brad Sham and Merrill Reese, long time voices of the Cowboys and Eagles, respectively. Reese has been Philly’s announcer since 1977. Sham, other than the time he left for a short stint with the Rangers, has been with the Cowboys since 1977.

Historically, recognition is long overdue for late local broadcast legends; Marty Glickman, the longtime Voice of the Jets and Giants, Bob Kelly of the Cleveland and Los Angeles Rams, Jack Brickhouse of the Chicago Bears, Gil Santos of the New England Patriots and Joe Tucker of the Pittsburgh Steelers.

Really interesting. Thanks for sharing this. An addendum: Kubek also did the Blue Jays telecasts for 13 years until joining the Yankees. Still, there’s no question that, for him as for Garagiola, network broadcasting got them the Frick Award. An interesting difference between the Frick and Rozelle Awards is that the NFL honors the behind the scenes people. I know some broadcasters and writers have suggested two deserving Frick recipients who weren’t regular broadcasters: Harry Coyle, who really invented televised baseball as we know it in more than 40 years as an NBC director, and Bob Sheppard, who started out… Read more »