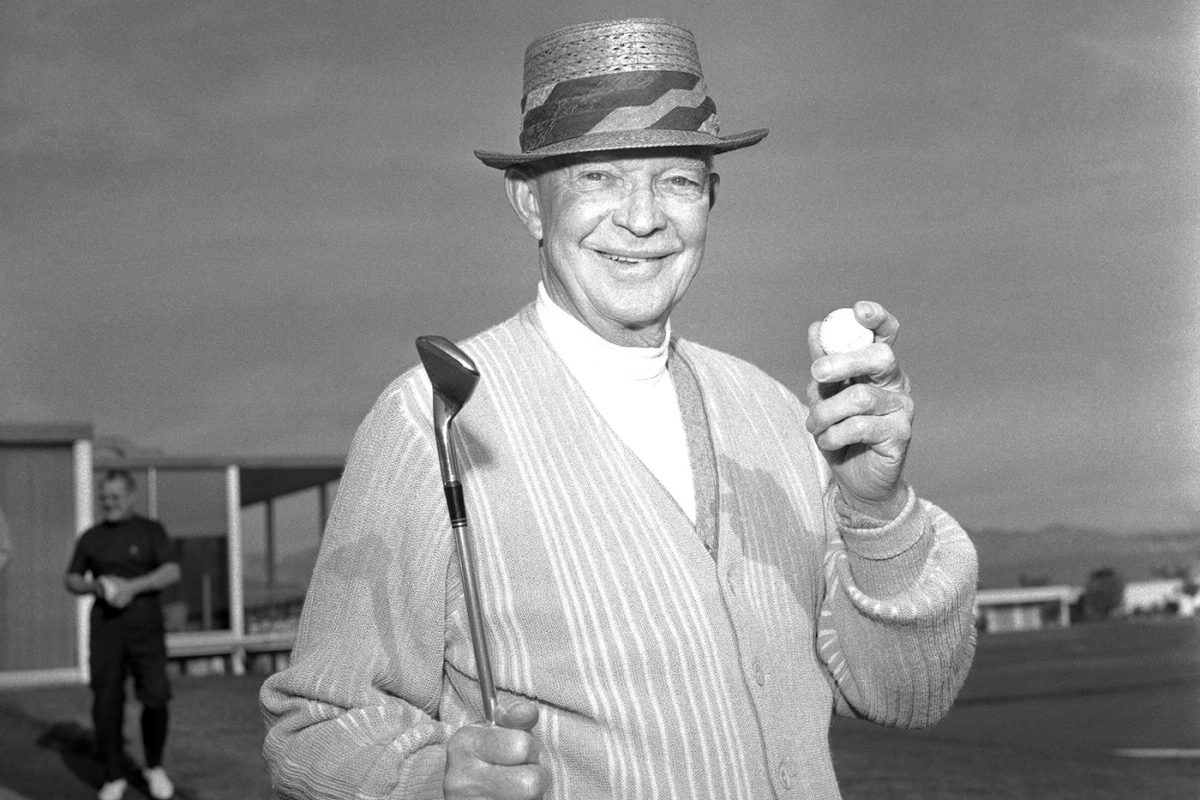 DWIGHT EISENHOWER: SEASONS IN THE SUN

In the early 1900s, two friends sat on a Midwest riverbank and talked of what they’d like to be one day. “I wanted to be a real Major League baseball player,” recalled Dwight Eisenhower. “My friend said that he’d like to be president of the United States. Neither of us got our wish.”

From 1953-61, Ike was president—born in Texas, raised in Kansas, rural and lower middle class, as formal as a West Point drill yet informal enough to make golf a national belly laugh—the greatest military hero of America’s greatest war.

“Everybody ought to be happy every day,” said Eisenhower. “Play hard, have fun doing it, and despise wickedness”—what his mother had taught him growing up. His Main Street persona—a day at the ballpark, steak in the backyard, family all around—almost became the 1950s. Few presidents have so mirrored time and place.

Ike’s favorite film was Angels in the Outfield, shot at Pittsburgh’s Forbes Field, with Paul Douglas as Aloyius X. “Guffy” McGovern, the Pirates’ foul-mouthed skipper—and James Whitmore as an angel’s voice, vowing to help the Bucs if Guffy stopped profaning. It etched ’50s escapism, like Ike’s TV Westerns and favorite band, Fred Waring and the Pennsylvanians.

Eisenhower loved to fish, hunt, and golf. A fine amateur artist, he finished five paintings which grace cabins at Augusta National Golf Club. He was the first president to shoot a hole-in-one, followed by Bill Clinton and George W. Bush, and put a putting green on the White House South Lawn. Years later, President Johnson, pointing to Oval Office divots, told a visitor, “Look what that SOB did to my floor.” Ike’s crucial place in forging golf’s cachet is still not grasped.

In 1953, he briefly forgot baseball’s then overwhelming niche—no other sport was close—missing the Senators’ opener to play at Augusta. Luckily, the game was rained out. Savaged for ignoring the presidential first pitch—said The Sporting News, “He has aroused an outcry”—Ike scurried back to dc for next day’s rescheduled opener, never missing another while in the U.S. Even strangers then traded big-league talk, increasingly fixated on an opiate. In 1950 only four million homes owned at least one TV set. By 1960 44 million—88 percent—did.

The Yankees defined Ike’s era, winning six World Series in the 1950s. Mickey Mantle smashed baseball’s first “tape-measure” homer, speaking to a generation born between 1946-64. Eisenhower himself empathized with No. 7’s pain and fire, having found it hard to stay healthy in high school—in particular, a knee injury—yet making his Abilene baseball team. Graduating in 1909, he won a tuition-free appointment to the U.S. Military Academy in 1911, his freshman baseball mates including Omar Bradley, another future World War II hero.

Later West Point’s varsity team spurned him, Ike saying that “not making the baseball team” was “maybe the greatest … disappointment of my life.” He turned to football, the New York Times naming him “one of the most promising backs in Eastern football.” In 1912 Army opposed the Carlisle Indian School and its legendary Jim Thorpe. The Cadets lost, 27–6, Ike playing linebacker and tackling Thorpe, then played Tufts, reinjuring his knee. Later, a horseback riding accident again damaged it, making Eisenhower a golfer.

In 1945, Ike returned from Europe, only to be asked “if it was true that he had once played semi-pro baseball,” wrote the Times. He had, in the professional Kansas State League, for money to attend college, though the NCAA barred anyone from staining amateur status. Amid confusion, Eisenhower escaped penalty. Instead, as president, he played a role he was good at and liked: the 1950s avuncular host, throwing out the first ball.

In 1953, Jim Piersall, his life braving mental breakdown and shock treatment, watched Ike’s toss before giving him another ball. “Mr. President,” he said, “would you sign this ball while those idiots scramble for that one?” Next year, DC’s Mickey Vernon hit a 10th-inning homer to beat New York. Reliving his brief 1910s stint as an Army broken-field runner, Eisenhower rushed to the field, grabbing Vernon’s hand. “Nice going!” he said, bubbly as a schoolboy. “Wonderful! A wonderful home run!”

In 1956, Ike entered and exited the World Series opener through the center-field gate at Ebbets Field, greeting each Dodgers and Yankees player, coach, and manager on the field. In Game Seven, Brooklyn pitcher Don Newcombe was hammered in what had become for him almost a Series rite.

Moved, Ike sympathized in a letter: “I think I know how much you wanted to win a World Series game,” he wrote Newk, who never did. “I for one was pulling for you. I suggest that . . . you think of the twenty-seven [regular-season] games you won that were so important in bringing Brooklyn into the World Series.” At that moment, perhaps Ike had become “a real Major League baseball player,” after all.