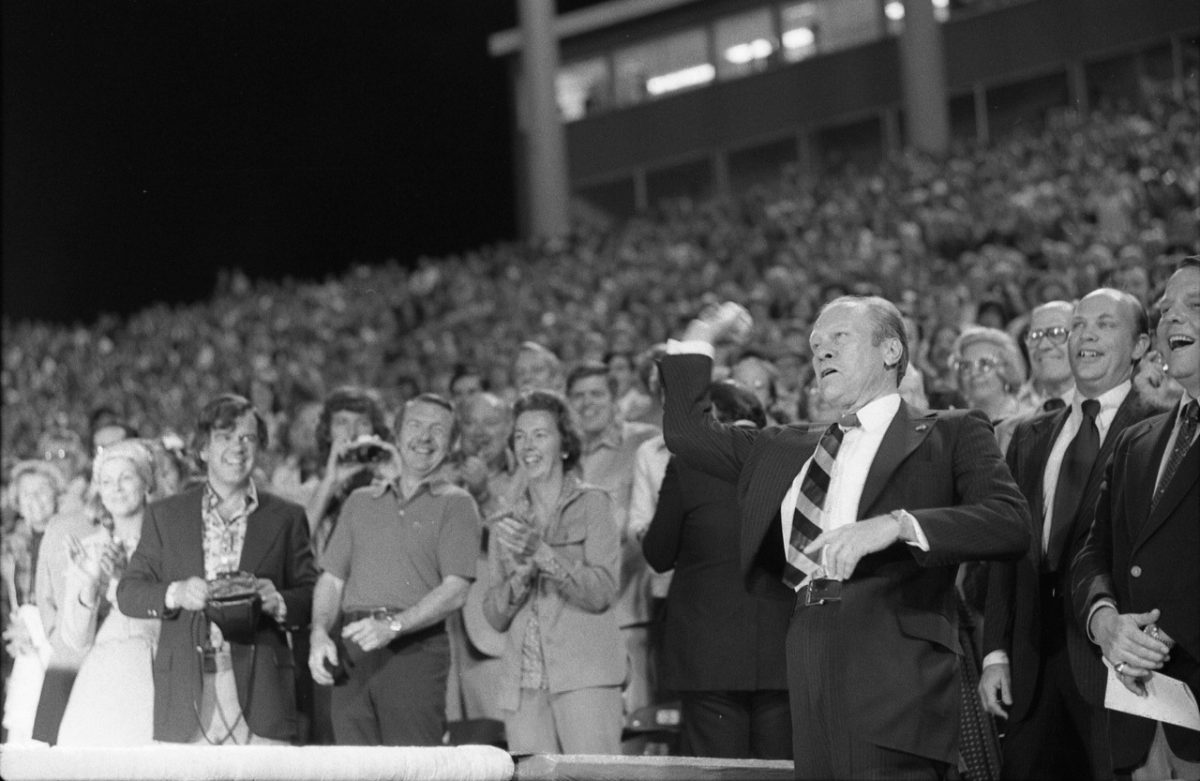 On April 9, 1976, President Ford throws out opening day pitch in Arlington, Texas. The Rangers, once the Washington Senators, were hosting the Minnesota Twins

GERALD FORD: ALL-AMERICAN, DESPITE THE IMAGE

On August 9, 1974, Gerald Ford took the presidential oath of office in the East Room where earlier that morning Richard Nixon had said farewell. Ford had grown up in Grand Rapids, Michigan, where he became a lifetime Eagle Scout, did odd jobs, and hoped to emulate football running back Red Grange. Ford was center, linebacker, and line snapper on the University of Michigan’s 1932-33 national champion team—a fine athlete who read the sports section first. He liked its lesson: “the value of team play.”

Image can warp reality. In Ford’s 1974-77 presidency, he devolved into a seeming stumblebum, inexplicably falling down airplane stairs. By contrast, his character had glowed when Jerry’s Wolverines were to meet Georgia Tech, which refused to play if black Michigan player Willis Ward took the field. Ford wrote to protest, even vowing to quit, to officials, who, ignoring him, benched Willis—Jerry’s best friend and roommate. As President George W. Bush once said, “He was furious at Georgia Tech for making the demand, and at the University of Michigan for caving in. He agreed to play only after Willis Ward personally asked him to.”

The episode augured a leader who was, above all, strong—and fair. After Michigan ’35, he spurned pro football’s Lions and Packers for Yale Law School, World War II, Grand Rapids law practice, and a 58-year marriage. Later Michigan retired Ford’s jersey No. 48. Ward became a Michigan probate court judge, he and Ford staying lifelong friends. In 2012, an Emmy Award–nominated documentary of their story, Black and Blue: The Story of Gerald Ford, Willis Ward, and the 1934 Michigan-Georgia Tech Football Game, was released.

Ford’s other favorite spectator sport was baseball, as a teen trekking 160 miles to Detroit’s Briggs Stadium. His favorite player was later Al Kaine, a regal working man. In 1974, Kaine got career hit 3,000. Next day the Tigers fan in the Oval Office called the future Hall of Famer, an aide having given Ford a word-for-word telephone memo about what to say to his long-time friend as if they had barely met. Someone leaked it to sensation-seeking columnist Jack Anderson. Ford hit the roof—as unusual for him as voting for a Socialist.

“No one had to tell me about No. 6,” Ford later said, his grasp of Tiger mania reaching far down their food chain. Once Tigers ex-general manager John McHale, visiting the Oval Office to present a big-league season pass, decided to test his knowledge.

Detroit won its first World Series in 1935. A decade later, Ford in the Navy, he heard a Cubs-Tigers Fall Classic on Armed Forces Radio about which Chicago columnist Warren Brown famously said, “I don’t think either team is capable of winning.” (Detroit did, barely.) In 1948, Ford easily won a first of 13 terms in Michigan’s Fifth District as Grand Rapids’ “Congressman for Life.” In 1967, a riot scarred Detroit, 43 dying. Next year the Tigers won another pennant and their first World Series in 23 years. Said Ford: “‘Sixty-eight, the Tigers cementing the city, was special.”

Always, the longtime GOP minority leader liked harmony, showing it as team catcher in the annual congressional baseball game, which he headed and for which he once smashed an inside the park grand slam. Said Ford: “Usually I play the outfield but everybody else [here] refuses to catch, so I’m stuck.” On October 10, 1973, the unharmonious Spiro Agnew resigned as vice president. To replace him, Nixon tapped Ford, who, confirmed by Congress, cheered in person Henry Aaron’s first swing on Opening Day 1974 to tie Babe Ruth’s career home run record.

Novelist Graham Greene referenced “the heart of the matter.” To Ford, sport’s heart was following his team and being an athlete in the company of jocks, liking to swim, ski, and play tennis. Ford especially liked golf, becoming infamous—ironically, like Agnew—for accidentally knocking shots off spectators’ and others’ heads. He became the first president since Kennedy in 1963 to give the Presidential Medal of Freedom, America’s highest civilian honor, to a sports figure—Joe DiMaggio and track and field’s Jesse Owens.

Ford died December 26, 2006, at age 93 years and 165 days, the then-longest-living president. After a state funeral and memorial services, Ford was interred in 2007 at his museum in Grand Rapids—the home town boy who embodied the joy of following and thoroughly rooting for the home town team.