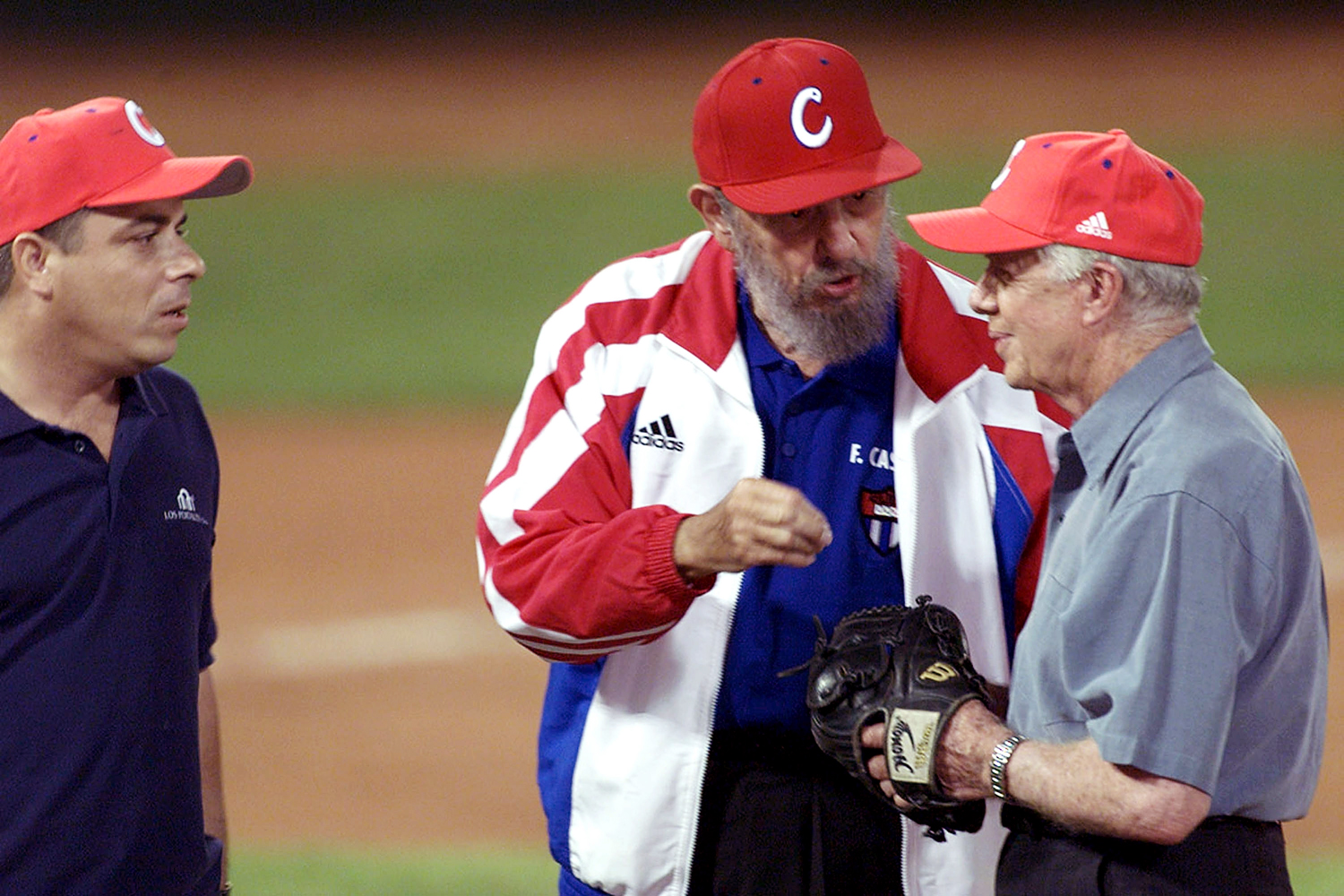 Jimmy Carter (R) and Cuban President Fidel Castro (C) talk after a friendly game of baseball at the Latinoamericano Stadium May 14, 2002 in Havana, Cuba.

JIMMY CARTER: FROM SOFTBALL TO HARDBALL

James Earl “Jimmy” Carter, Jr., realized the American Dream in an American schoolbook way: “the small-town man who dreams of becoming president, and who by hard work and against incredible odds achieves his ambition,” wrote time magazine columnist Hugh Sidey. He came out of nowhere—indeed, beyond it—to win the presidency in 1976, serving in 1977-81.

Carter grew up in Plains, Georgia, his family operating a peanut farm. Each year, when their work load was lightest and Lillian and James Earl Sr. felt free to indulge their zeal, “My parents drove up north to spend up to two weeks immersed in major-league baseball,” Jimmy wrote. “To see the world,” they chose one burg a year, accessing the big leagues’ 16 teams in 11 cities.”

One year the Carters stayed in Boston for a Braves homestand; next, St. Louis, the Browns; another, Pittsburgh, the Pirates. Travel was slower, homestands longer. At Yankee Stadium they saw Babe Ruth hit “two homers in a game.” They inhaled the minors from the Midwest to Georgia. “It was clear to all,” he wrote, “that these … these were the parents’ experiences of our children’s lives, and they chose to share them.” He never forgot.

The Naval Academy graduate wrote the above in his book Sharing Good Times. Carter’s public rhetoric brooked a sing-song voice, cadence lacking rhythm. His written work was another kettle. Sharing Good Times evinced a fluid stylist, conversational throughout, baring one anecdote after another in a gentle, rural way. In 1953 Sr. died, having “loved the game every bit as [much as] mama,” Jimmy said. The Carters’ family odyssey was and remains unmatched—a baseball lover’s dream.

Growing up, Carter loved tennis, starting with the dirt court on the family farm and wending through 1977-81, when he took it on himself to approve each request to use the White House courts. He also led the 66-Nation boycott of the 1980 Summer Olympic Games in Moscow, sparked by the 1979 Soviet Union invasion of Afghanistan. As 1976 Democratic nominee, he played softball with friends, reporters, and Secret Service agents, siring bizarre talk that he disliked or didn’t know much about baseball. It is true that Carter became the first president not to see a regular-season big-league game since 1892. It is also true that he was a workaholic, deeming any leisure sloth.

The only baseball Carter saw as president was the 1979 World Series final. Carter rode the presidential helicopter to Baltimore, entering the Orioles clubhouse to be met by catcher Rick Dempsey’s “Next time, get your a__ out of here before the seventh game.” It took time for Carter to be seen as inheriting his mother’s mania, Miss Lillian having attended Jackie Robinson’s first game in 1947 and tossing the first pitch at the 1977 World Series. In 1974, as Georgia governor, he sat in boxes at Atlanta-Fulton County Stadium with Lillian and wife Rosalynn to see the Braves’ Henry Aaron break Ruth’s career home run record. The game was halted to honor the Hammer. Carter gave No. 44 a special tag: HR-715.

By the early ’80s, Atlanta owner Ted Turner’s Superstation TBS was making baseball available nightly, coast to coast—if not a miracle, more welcome than an open bar. As cable changed TV, it increasingly eyed Carter at the park. In part, this was natural: Cable aired more baseball. A larger factor was that Carter was more often visiting baseball. Recalling his big-league-challenged presidency, the public must have thought him Saul on the Damascus Road, scales fallen from his eyes. This was most true in postseason, as viewing peaked and the Braves triumphed. Carter seemed overnight to have come of age.

In 1992, the Braves scored a run in the home ninth inning of the last game of the 1992 League Championship Series (lcs) to trail Pittsburgh, 2–1. Francisco Cabrera then pinch-singled to score David Justice and Sid Bream for a stunning 3–2 victory—the pennant. As Bream slid, Carter left his seat to clear the fence, sprint to the plate, dodge police, and hug manager Bobby Cox, the players, and Cabrera like a teammate—a fan. In 1995, the Braves finally won a World Series—the first franchise south of the Mason-Dixon Line.

A decade later Carter presaged future president Barack Obama’s 2016 visit by entering Cuba to see President Fidel Castro, watch an all-star baseball game that he dubbed “maybe the high point of my visit,” and give a televised speech to the Cuban people. “I think the people of our countries share many things,” he said. “Two of them are good music and baseball.”

Carter has seen games at three Braves parks—Atlanta-Fulton and successors Turner Field and SunTrust Park—and untold more on the theater of the mind (radio) and radio plus pictures (tv). “We rarely miss a game [watching] mostly on television,” he wrote in 2016 of the Carter family, “and my general well-being is strangely affected by the latest performance”—likely recalling Miss Lillian, who died in 1983, having passed baseball unto her son in life.

Dan Rather said Martin Luther King once asked him his religious background, and he replied that he had converted because of his wife’s faith. Dr. King chuckled and said something like that was how it usually worked. My mother loved baseball, and my father loves it. It does indeed get handed down from generation to generation, and I hope Jimmy Carter has been able to do that with his brood.