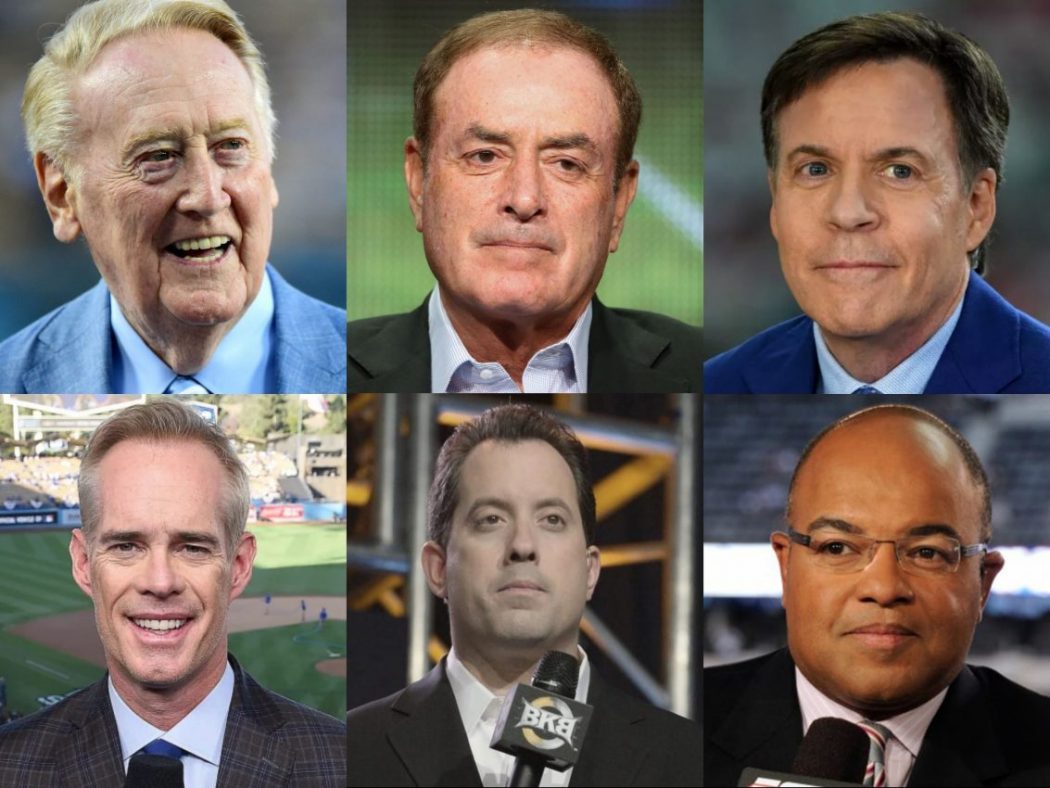 A number of these voices, Kenny Albert, Joe Buck, Sean McDonough and Al Michaels had connections of sorts when launching their careers. Their fathers were in the business. Yet the truth is that each one made it on their own merit, hard work, smarts and natural talent.

This list of these dozen voices are unquestionably precocious. They made their network debuts while in their twenties and went on to excel nationally for decades .

There were others (e.g. Dick Enberg, Marv Albert, Curt Gowdy, Kevin Harlan, Tim Brando and Verne Lundquist) who were not yet embarked saliently on their network careers in their twenties.

Listed in alphabetical order, age and college in parenthesis:

Son of retired Marv Albert, Kenny was in a hurry, even in his mom’s womb. Kenny was born prematurely. It was a sign of what was to come, a young start to his career. Hockey was Kenny’s early ticket. He was named the Voice of the Washington Capitals at age 24. By 26, he was on Fox’ payroll and has been there since, doing football and baseball. Next hockey season, he’ll be the lead NHL voice for Turner. (NYU)

He was in his early 20s when he began broadcasting Cardinals games, often alongside his famous father, Jack. Before you knew it, when he was just 25, Fox hired him to call NFL games. The rest is history. In time, Joe became the Voice of Fox Sports, the network’s lead play-by-player for both the NFL and MLB. With a good number of years ahead of him, Buck is likely to break the record of calling more Super Bowls than anyone. He’s already done more World Series than any previous network TV voice. (Indiana)

A whiz. At age 24 in 1976, Costas called NFL games for CBS. At age 28, he hosted the NFL on NBC. Bob would remain with the Peacock for 40 years. Inarguably, Costas is considered the finest studio host in network sports history, and the most visible. Whether it was at the Olympics, the  World Series or the Super Bowl, Costas held our hands, telling us what to expect and often how he felt about debatable issues. He is equally comfortable behind the play-by-play mic, calling World Series, the NFL, NBA and more. Through the decades, he’s interviewed a list of who’s who. (Syracuse)

Freshly graduated from Notre Dame in the early 1960s, Don Criqui’s voice was always in full command. It remained that way until he retired as the radio Voice of the Irish three years ago. By age 26, he was the radio/TV voice of the New York Knicks. He left after just one season in 1967, prior to his 27th birthday, to join CBS. Criqui turned into a prominent network voice who worked for parts of five decades for either CBS and NBC. Not a bad resume! He’ll be best remembered for doing the NFL, college football and hoops. (Notre Dame)

In recent years, the versatile Gumbel has done his sports work at HBO, tackling controversial news items and engaging in probing interviews. Before casting a wider net and joining NBC’s Today Show, Bryant was the network’s studio voice and face of the Peacock network. At 27, Gumbel co-hosted NBC’s NFL pre-game show with Jack Buck. Through his illustrious career, he’s also hosted NBC’s Olympics, MLB, PGA and was on the air, anchoring coverage of the 1981 NCAA title game just after President Ronald Reagan was shot. (Bates)

In 1974 on ABC, Lampley and Don Tollefson were the first sideline reporters a network ever used on a regular season telecast. Jim was 25 at the time. A North Carolinian, Lampley’s tenor was bold and his accent redolent of his southern roots. In a career that spanned more than four decades, he worked for ABC, NBC and in recent decades for HBO where he was the voice of the cable network’s boxing coverage. Lampley also did the NFL on NBC and was on the broadcast teams assigned to the Olympics, golf, Wimbledon, and the Super Bowl TV. (North Carolina)

Smooth and resonant, McDonough inflects his voice perfectly, like flawless musicians who don’t miss a note.  The networks recognized McDonough early. While in his twenties, Sean was doing an Ivy League football package for PBS. By 28, he was calling basketball for CBS and by 29 was on the NFL. McDonough was the prime voice of CBS’ MLB package in the early 90s and has since been as visible as they come,  for ESPN/ABC, calling baseball, the NFL, the NHL and loads of college football. (Syracuse)

A blend of flat-out talent, determination and happenstance fueled Al Michaels’ network career. He learned the ropes in Hawaii where he called baseball, football and basketball. In 1971, at age 26, he was hired as the radio voice of the Cincinnati Reds. When the team advanced to the World Series in 1972, he joined Curt Gowdy on NBC’s telecast. In 1973, he did his first network NFL telecast for NBC and after a brief stint with CBS, he was signed by ABC. The rest represent a star-studded career. He’s been the voice of NFL prime time for 35 seasons. (Arizona State)

After graduating from the University of Houston, Nantz worked TV anchor jobs in Houston and Salt Lake City. In 1985, at age 26, CBS hired him as a studio host. His career evolved. Over the past 36 years, Nantz has warmly called multiple Super Bowls, 30 Final Fours and decades of Masters. Nantz has also hosted the NFL Today and a couple of Winter Olympics in the 90s. Like the late Dick Enberg, Nantz finds human interest angles that he seamlessly infuses into his game broadcasts. (Houston)

New York raised, Stockton was another precocious product, freshly graduated from college when he landed on TV in Philadelphia and later in Pittsburgh. Stockton was in his 20s when he called NFL games on NBC. He would go on to enjoy a splendid career, calling NFL games for decades at CBS and Fox. Just as Marv Albert is linked with the Jordan years, Stockton called nine NBA Finals, most in the 80s. He’s associated the Showtime Lakers and their rivalry with the Celtics, featuring Magic and Bird. (Syracuse)

Scully’s name is synonymous with greatness and a role model for  crème de la crème broadcaster. The fastidious Red Barber took him under his wing when Vin was all of 22, giving him a seat in the Ebbets Field booth. By age  25 in 1953, Scully was put on NBC’s World Series alongside Mel Allen. Scully is unquestionably baseball’s best ever broadcaster. In the 1980s, he was hired by NBC as its lead MLB voice on the Game of the Week and post season. Earlier in his career, he covered the NFL superbly in addition to doing golf and tennis for the networks. (Fordham)

This fellow works his tail off. Put on NBC and he’s there. You’ll see him at the Olympics, at the swimming trials, horse racing’s Triple Crown, the Indy 500, in the NFL studio or doing talk shows. He began his network career at ESPN when he was 25, three years after graduating from Syracuse. He did tons for the Bristolites, working a variety of events, plus doing lots in the studio. He follows the same indefatigable practice at NBC. In 2022, he’ll live his dream when he’ll call NBC’s Sunday Night Football package. (Syracuse)

Skip Caray once said that if he hadn’t had Harry for a father, he wouldn’t have gotten the opportunities he got starting out. But he said that if he hadn’t been any good, he wouldn’t have kept the jobs or gotten others. I never cease to be amazed at the people who say, for example, Al Michaels made it because his father had connections. Well, if he had connections, they helped. I don’t think NBC has kept him around because his father was an agent.