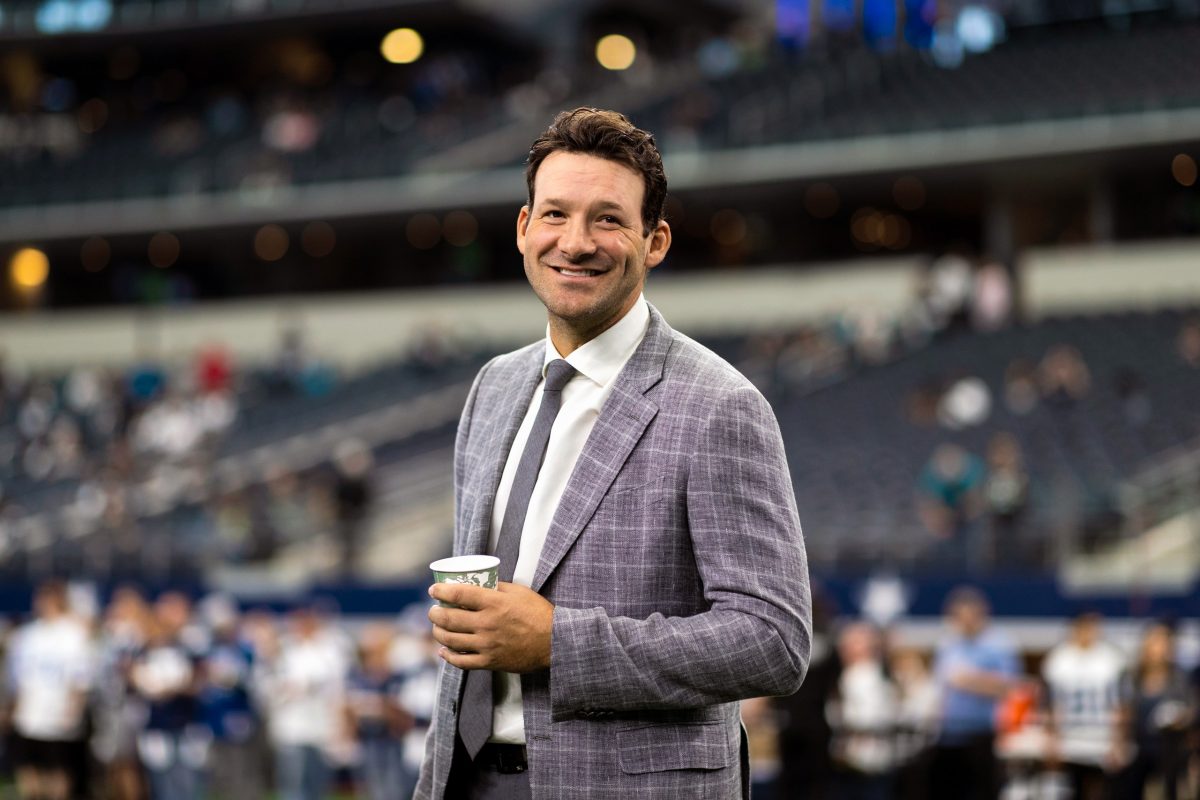 With his brimming new contract, worth $17 million per year, Tony Romo can treat full stadiums all season to cups of coffee

Tony Romo reportedly asked CBS for $10 million a year, up from his current $4 million contract. The deal would make him one of the highest paid analysts in NFL broadcasting history, joining and surpassing Jon Gruden who reportedly made about $6.5 million and  legendary John Madden who earned $8 million. Madden retired after the 2008 season. (Value in 2019 dollars is roughly $9.6 million.)

ESPN’s polarizing Stephen A. Smith is reportedly concluding negotiations that will pay him close to $10 million annually.

Romo should go for it. There’s absolutely no reason why he shouldn’t shoot for the sky. Rival networks would love to land him, especially when Jason Witten showed that you can’t just grab anyone from the league and excel on the television stage.

Most agree that Romo is currently the best football analyst in the business and can pick apart even the greatest NFL coaches, as he did with Bill Belichick in 2017. Belichick and the Patriots were in the process of winning a game when the coach wanted to make the plays of his team harder to read for future opponents. So Belichick started tinkering with things on the field by doing the unpredictable to throw off future opponents.

But Romo is too sharp at reading plays and cut through it. The ex-Cowboy quarterback has become the biggest personality to hit televised football. So why not ask for top-tier money! It’s likely that competitive networks would accommodate his salary requests to snare him from CBS.

But CBS is running a business and has to be prudent. A huge investment might backfire. Ad revenue is not always predictable. There are vagaries and uncertainties, namely ratings and the economy, both of which dictate corporate spending. Yet the going is pretty good now and networks need live programming to remain exclusively relevant. It’s why Romo should strike when the iron is hot, capitalizing on his popularity while he can. If Romo wants $10 million, CBS should open its check book and give it to him.

Recently, MLB Commissioner Rob Manfred suggested that baseball could be in the running to buy RSNs from Disney which acquired the networks in its recent mega-deal with Fox. As part of the agreement, Disney is required to sell the RSNs in the near future. Manfred views it as a way to eliminate revenue disparity between MLB franchises and move to some form of a single, national rights contract similar to the NFL.

Time will tell whether a potential move like this is prudent or if it will materialize at all. Buying these properties will only consolidate the holdings of 14 MLB teams. When the Yankees buy back YES Network, it means that teams will hold 15 of the 30 media rights contracts. But retaining only half of the properties won’t give MLB sufficient power to negotiate a single, national level deal with its media rights.

It will also be interesting to see how other leagues react to the deal. The Fox RSNs don’t only control MLB media rights, they also have the media rights for 16 NBA teams and 12 NHL teams. The NHL isn’t likely to have a problem with MLB owning some of its media contracts because the NHL has already signed over its digital media rights to MLB Advanced Media, meaning that MLB runs the NHL’s website, apps, and NHL Network. But how the NBA would respond to an MLB purchase of the RSN’s remains to be seen.

On the other hand, this can also give MLB some control when the television/media rights bubble pops, if it ever does. However, if it doesn’t pop, MLB would get to control half of its media deals and sell them collectively to the highest bidder, if it so chooses.

MLB also announced that its new deal with Facebook is for a mere six games for which the website’s rights are non-exclusive. Last season, Facebook had 26 games and exclusive rights to all but one. This move makes sense for the league. The Facebook experiment last season didn’t do particularly well. It was plagued by poor connections. Facebook viewers didn’t like the seemingly haphazard streamcasts of the games which were often irritated by buffering issues that occasionally rendered the games unwatchable. While streaming rights are an increasingly competitive side of the business, it seems that Facebook might have lost its leg up on the competition.

Just recently, ABC, owned by Disney, broadcast the Overwatch League’s Stage 1 final. ESPN and ABC are under the same corporate umbrella and Disney also has the rights to the NCAA Women’s Basketball Tournament. The fact is that the Stage 1 Final was on ABC and the basketball was on cable.

According to Jacob Bogage of the Washington Post, carriage on ABC baffled traditional fans who are reluctant to recognize esports as a competitive sport.

This is the world we live in. Esports has a lot to figure out with broadcasting rights, especially since most of its major championships are broadcast for everyone to see on Twitch, which doesn’t follow the same revenue model as broadcast television does. But this free streaming service limits the amount of money that esports can generate through conventional broadcasting outlets. Still, the fact remains that esports are incredibly popular.

ABC doesn’t just put shows on its national network on a whim. So the visibility for esports on conventional network television demonstrates that it is gaining a lot more traction than people think. (Confused on what esports is? Check out my series on the topic.)

Ratings for the Overwatch event on ABC didn’t spike the charts. They were rather underwhelming.  According to Sports Media Watch, ABC  did a 0.22 rating and 306,000 viewers on the Saturday telecast and a 0.28  rating and 367,000 viewers for the Sunday broadcast.  But the numbers and viewing patters need more of an in depth study. Most people who watch esports do so on streaming devices and on the internet than on traditional TV. The migration trend of younger viewers away from traditional sets is a challenge for all television networks. As such, ABC is trying to counter this trend by running the Overwatch League and getting younger segment to watch on television instead of Twitch.

In the end, you’re watching someone play a game. Darts and poker were once very popular on TV and those, in my view, are far less exciting than esports.