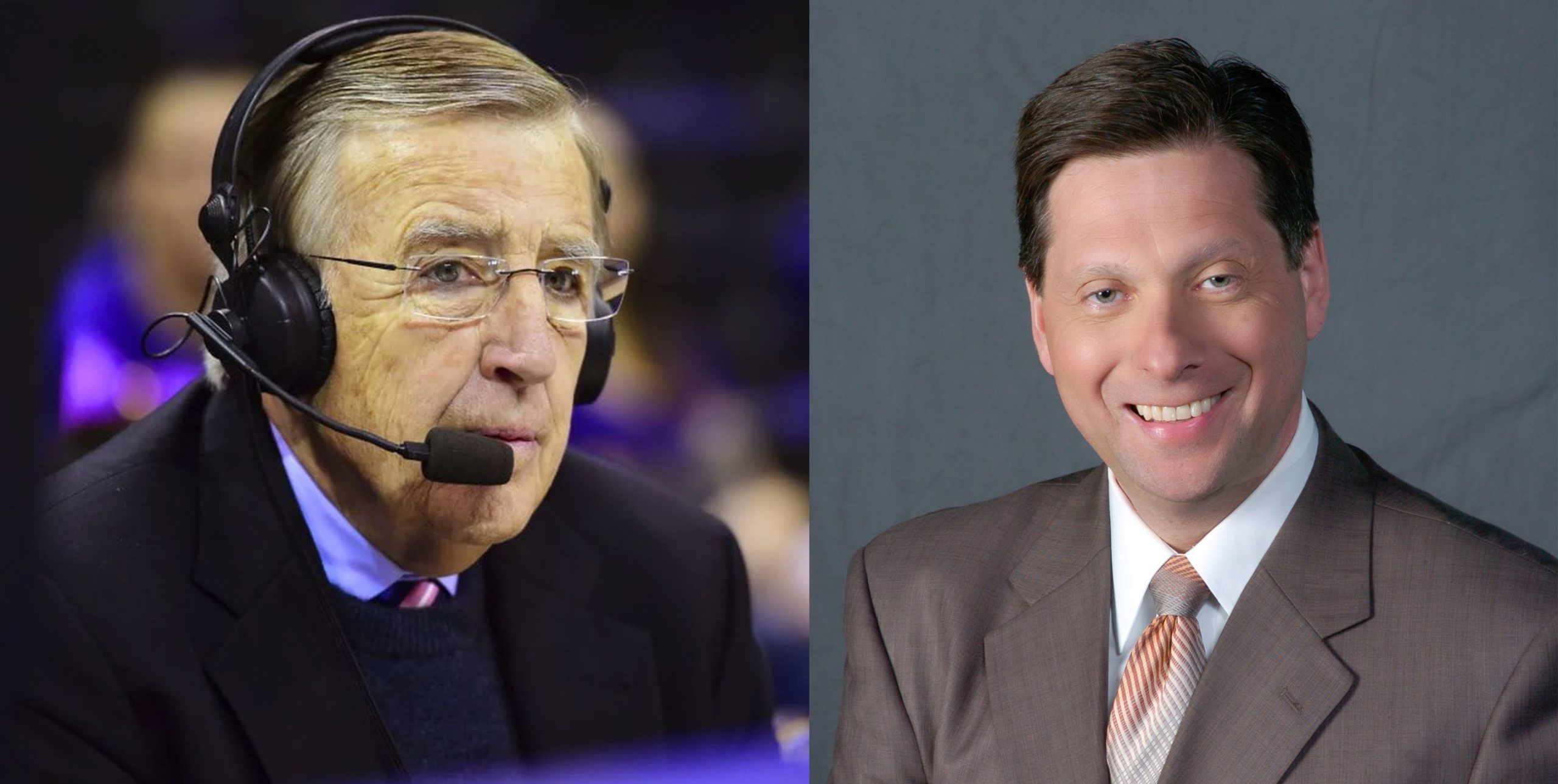 The story that emerged from Oakland a couple days ago caught me a bit off-guard. Still, there’s some rhyme and reason behind the move that puts Brent Musburger behind the Raiders’ radio microphone.

First, how about Greg Papa whom Musburger replaces? He’s up there with a handful of the NFL’s best radio voices, guys like Merrill Reese, Dave Pasch, Gene Deckerhoff, Brad Sham and Wes Durham.

Papa has his following in the Bay Area. He’ll be missed. When he first assumed the Raiders gig in 1995, he faced an unenviable challenge.  It was just two seasons removed from the reign of the legendary Raiders’ voice, Bill King. Not many follow an icon successfully. Papa did. The Buffalo native proved that legends are not always irreplaceable.

Papa called games robustly, much the way King did. Yet Papa fashioned his own style. He was also helped by the fact that for the first two years after King left the booth, Joel Meyers was the announcer and Raider fans never accepted him.

Greg has other radio and television gigs in the Bay Area, the 6th largest market in America. Las Vegas, for all its glitz, is 40th. As such, it was unclear whether Papa wanted to move to Las Vegas. There’s been talk recently that Papa would make a good fit for the 49ers. Current voice, Ted Robinson, is solid but doesn’t have the charisma, signature or enthusiasm of Papa.

Musburger is an icon who contributed significantly to the growth of sports on network television. Think of his first trailblazing role; popularizing CBS’ NFL Today beginning in 1975. Brent gave the show its presence. It led network ratings in its timeslot for years.

Sharp tongued and vibrant, Musburger never backed off from engaging in polemics. On NFL Today, he helped make personalities of Irv Cross and a onetime Ms. America, Phyllis George. He got into more than just a verbal spat with prominent studio participant, Jimmy the Greek. In fact, the two battled physically in a New York restaurant one Sunday night after a studio show.

For CBS, Musburger was the voice of six NBA Finals and  six Final Fours. Some like him and others don’t. You can argue that the dismissal of Musburger in 1990, then the face of CBS Sports, was the loudest firing in network sports history. It made the front pages of tabloids all across America at a time when newspapers were indispensable.

Musburger rose from the ashes soon thereafter, proving F. Scott Fitzgerald somewhat wrong; demonstrating that there is a second act in America. It began at ABC and extended to ESPN. Flash forward, Musburger brought his folksy play-by-play to college football. He was back to being a fixture on NBA and college basketball telecasts. (As an aside, how Musburger isn’t a Gowdy winner in the Naismith Hall of Fame is mindboggling. He has glittering basketball broadcast credentials.)

So two accomplished broadcasters; one is out and one is in. Both are talented and both defeated difficult odds. Musburger continued his network presence after being dropped by CBS and Papa was loved by fans who never thought there would be a second coming of Bill King.

Now the Raiders are focused on their new home, Las Vegas, where Musburger lives year-round. He runs content for VSiN, a sports gambling media outlet at a time gambling is about to sprout legally . Musburger can lead the Raiders’ everyday charge. He’s on SiriusXM, writes newspaper columns and streams video.

But face it, this is radio. Is Musburger ready?

To my knowledge, Musburger has done only limited football play-by-play on radio, never regularly. It requires a different skillset.  Brent is very bright and quick on the learning curve but he’ll be parked in radio booths that can hardly be called vantage points anymore. The best booths are being sold as luxury suites. Radio is relegated to positions that are eight flights above the corner of the field. When he did the NBA on ESPN Radio, it took him a while to get his bearings. Trying to learn the fundamentals of play-by-play football at 79, might be impossible.

When Brad Sham prepped Verne Lundquist for what to expect when he filled in for him on a Cowboys radio broadcast, Brad said, “Verne, keep your eyes on the monitor.” Verne – with that warm chuckle- said afterward, “Thank goodness for those monitors.” You’ve got to wonder whether Brent knows what he is getting into.

Other than Bob Lamey, Musburger will be the oldest announcer in the NFL. The Colts’ Lamey is some six months older and will turn 80 in December.

Curt Gowdy did football for years on radio. He was reared on it before becoming the biggest voice of network play-by-play in the 1970s. He called multiple Super Bowls for NBC. When his network days petered out, the Patriots hired him to do radio. It didn’t work out too well. Curt left after one season. And here was a guy who did lots of radio and had tons of experience.

Then again, like it or not, some of these play-by-play broadcasts today are less about painting the picture and more about making the game a talk show. With Brent, the play-by-play fundamentals might suffer but the personality of the broadcasts won’t. Quite likely, the picture-painting and rhythm won’t be as graphic or silky smooth as Papa’s. Brent’s will likely be choppier. But it will be interesting because wherever he goes, Brent’s work provokes responses.

There have been a couple interesting firings and changes through the years in the Bay Area. I would put this one right behind the sobering change in the Giants baseball booth when Russ Hodges was forced out after the 1970 season. Unless Greg lands elsewhere, the NFL will lose one of its best broadcasters. That’s too bad.

The TV play-by-play platform served Musburger well for decades. Having to only caption the picture, he had the runway to sprinkle his strong opinions and often irrepressible personality into his play-by-play.  Today, he still has piss and vinegar. Exigency of time is apparently nothing that intimidates him.

Phyllis George was Miss America 1971, not Ms. America, which is a separate pageant founded in 1997 to empower women across the US. Also, it’s good to see the Raiders aren’t being influenced by age in making the decision, although it has to be discouraging for Bob Papa to be ousted after 24 years (and being popular with the team’s fans). I predict Brent will do the games for a year to help get the team set up in Vegas and then move on.

Yes, I had no idea that there was a differentiation between Ms and Miss America! I see that to qualify for Ms America a contestant must be 26 years of age. And then there’s Miss Universe which our president was forced to sell a couple years ago. I had the opportunity to meet Mr. trump during his days as a private citizen. He would occasionally come to Heat games. When he did, he sat right behind me – no bodyguards or security detail! I had a one minute conversation with him once during a commercial break. We talked about Charley… Read more »

His name is Greg Papa. He’s a Bay Area legend like his brother, the great Gary Papa was in the city of Philadelphia. Gary was the Sports Director of WPVI-TV for decades, before succumbing to cancer several years ago.

The reason according to many reports is that Raiders owner Mark Davis had an issue with Papa, over Papa’s out spoken comments on how Mark would even consider interviewing Mike Shanahan a few years back for the head coaching job with the Raiders. Apparently, Papa was and is very loyal to former owner Al Davis and Davis regretted his hiring of Shanahan years early. So Papa was simply standing up for Al, Mark’s father, and questioned Mark as to why. Mark didn’t like the comments and thus we have this result…. Living in LA, we can listen to Raiders games… Read more »