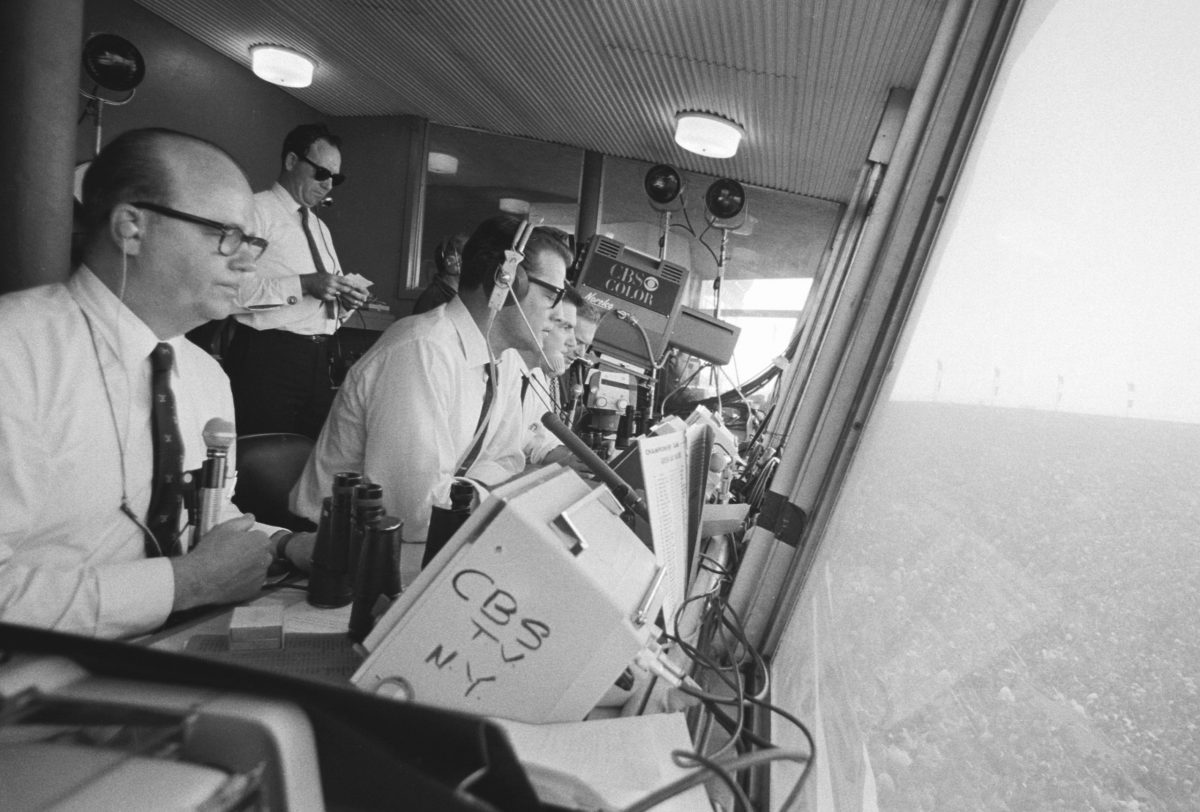 Ray Scott in foreground, calling the first Super Bowl in 1967 in Los Angeles

Ray Scott’s name was as prominent with NFL fans in the 60s and early 70s as the names Buck, Michaels and Nantz are today. He did four Super Bowls for CBS, including the first two in 1967 and 1968. Ray also voiced six NFL championship games and the famous 1967 Ice Bowl in Green Bay.

Ray was a self-disciplined minimalist, a man who fashioned an elegant style using an economy of words. He was succinct and bare-boned; indelibly terse and crisp. His signature, skeletal-like call is still remembered reverentially and intoned by those who appreciate its classic definition.

Until 1968, CBS assigned its NFL announcers to single teams. Scott got the Packers just as Chris Schenkel had the Giants. Riding the victorious coattails of Vince Lombardi and Green Bay’s championships, Packers’ telecasts and Scott’s distinct call became intermingled. His other assignments swelled and for a time he was considered CBS’ lead voice of the NFL.

But Ray didn’t use his imposing voice and center-stage platform to preside, rather to guide. For someone reared in radio, he adapted seamlessly to television through simple accuracy and measured phrases. Three utterances captured his style, “Starr…Dowler…Touchdown.” Never an excessive word or sugary syllable.

Scott’s sonorous sound filled a room but his sparse word-count couldn’t fill a closet. If his pay was calculated by the word, he would have been the highest paid announcer in network television sports history. Far from it though. Ray told an interviewer that the biggest broadcast mistake he ever made was not hiring a hard-nosed agent, adding that the most he was ever paid for a Super Bowl was $800.

As the NFL thundered past baseball for viewership and fan attention, he was as much a part of the football landscape as fall’s colorful foliage is in New England. Scott won the Pro Football Hall of Fame’s Pete Rozelle Award for broadcast excellence, posthumously in 2000.

An eloquent student of just about anything, Bob Costas remembers Scott’s broadcasts, “He sounded like Lombardi’s Packers: Spare, direct, no frills, no nonsense. Straightforward, yet dramatic. It fit the team, the town, and the whole Packer ethos perfectly; and on TV, where concise captions well delivered, fit the bill.” Was it the championship Packers? “If Ray had been calling Eagles or Cowboys in that era, he still would have been excellent, but it would not have resonated in the same way,” Costas added.

Ray Scott was the first modern day NFL television play-by-play announcer to let the picture suffice, more often than not. He happily took a back seat to what viewers saw on the screen. But his striking silence reinforced the need for a color commentator who could fill the void with depth and substance, namely meaty analysis. The role of the second man in the booth would indeed evolve in the years that followed Ray’s network presence.

Scott said that an old football coach once told him “I didn’t have to say that so-and-so was fading to pass because everybody could see that. All I had to say was who had the ball. You gotta give the viewers credit for having some intelligence.”

When Pat Summerall, his one-time color commentator moved over a chair to do play-by-play, he popularly continued Scott’s wave of minimalism. For decades, Pat would say that the greatest compliment he could get was that he sounded like Scott.

“Ray’s influence on Summerall is obviously significant,” Costas said. “Pat had a deep and dramatic sounding voice. He made the calls and then (Tom) Brookshier and later (John) Madden had all the room they needed. Perfect pairings of the broadcaster, his partners, the sport, and the network’s biggest games.”

When the longtime commentator Billy Packer worked a basketball game with him, Scott said to him before the broadcast, “Billy, it’s your show.”

Scott was born in Johnstown, Pennsylvania on June 17, 1919. This Monday, Scott would have turned 100.

Although he’s first identified with football, Scott also did baseball, working Twins games on radio and television. In 1965, for that matter, the Twins’ Scott and the Dodgers’ Vin Scully teamed to do the Twins-Dodgers World Series on NBC. Never since, have the networks called upon team announcers exclusively to do a Series.

Scott got his big network break in 1956 through circumstances that were unfortunate. He was assigned by ABC to work the Sugar Bowl with Bill Stern, then one of the nation’s best known sportscasters. (Through radio’s early decades, Stern and Ted Husing were as popular as any sportscaster in America has ever been.)

But Stern who had lost part of a leg in a car accident had become drug addicted. He arrived at the game in New Orleans with little time to spare before kickoff. He stumbled into the booth and could barely get through the open; stuttering while identifying the two opponents, Georgia Tech and Pitt. In New York, ABC got understandably antsy and ordered Stern off the broadcast. Scott was asked to take over and he proceeded to present the play-by-play immaculately.

Working alone that day, Scott was challenged further by the fact that the clock at the Sugar Bowl had malfunctioned and he was forced to call a tight contest without the benefit of knowing the time remaining. Ray was so unflappably smooth that the next fall CBS hired him to cover the Packers for its NFL package.

But CBS didn’t renew his contract in 1974. There were those who said he sounded stiff or somewhat hollow. By then, Monday Night Football on ABC featured personalities and characters like Howard Cosell and Don Meredith. Information alone wasn’t enough. Broadcasts required personality and entertainment.

Scott, then 55, bounced from job to job. Over the next 19 years, he did radio for Arizona State, the Vikings, the Bucs, the Chiefs and the Minnesota Gophers. He also did work for NFL Films and the USFL. For a time, he also read the news on a radio station in Minneapolis.

In 1993, by then 74, Scott took a job in Green Bay where he was still identified with the Packers’ glory years. He hosted a nightly talk show on a radio station, whose call letters were aptly designated WNFL. He was coming off a rough patch, having suffered financially and through severe health issues including a kidney transplant. The kidney donor was his own son.

When Scott arrived in Green Bay, he told people that this would be his last job. The man had been at the top of the heap, a lead television voice of the NFL and one who hosted the Masters. He was in Green Bay hoping to make ends meet.

It took me awhile to “warm up” to Ray Scott. My first remembrances of him doing the Packers on TV, I thought he was dull, unenthusiastic and didn’t compare well to, say, Chris Schenkel. Then I realized how good he actually was, especially in the meticulous way he always reported the substitutions in and out of the lineup, no matter the position, which today is almost an announcer afterthought, except for identifying subs for the skill players. His similarly minimalist approach to golf on TV though could cure insomnia. “Palmer…..beautiful….” ZZZZZZZZZZ.

Scott was very critical of Monday Night Football for showmanship at the expense of the game, and I think what happened at CBS Sports–unless I’m mistaken–was the replacement of Bill MacPhail by Bob Wussler meant he felt CBS was going in the same direction (it did on The NFL Today, but not on the game coverage). Scott did very well on baseball, and his Twins partner, Herb Carneal, once said that you wouldn’t have thought his style would have worked on radio, but it did. I’ve heard clips of his radio work and I agree, and he did a fine… Read more »

Michael, You are very correct. There is a great backstory to dad’s departure from CBS and it begins and ends with Bob Wussler. Dad’s ability to transition from radio to TV back to radio was, and is, underappreciated. He would not tell you he invented the “let the moment speak for itself” style of broadcasting, he would never be so bold. But, he did because he had the utmost respect for the sports he covered and the men and women who played (or coached) them. One correction to the story, dad was born on June 17th.

David, thank you for this warm and wonderful tribute to my dad!

All TV PBPs talk too much. I learned to not do that when I had a garrulous partner on cable TV. Scott and Summerall proved that less can be more. And besides that the viewer can see what’s going on; description beyond who has the ball is not necessary.